Mathieu van der Poel (Alpecin-Deceuninck) won the Hulst round of the UCI Cyclo-cross World Cup at the weekend – his first ’cross race of the season – and this is the Canyon Inflite CF SLX that he rode to victory, one of the best cyclocross bikes out there.

The Dutch rider destroyed the field, with Britain’s Tom Pidcock looking set to take second place before crashing out on the final lap and retiring with a broken rear wheel.

According to Canyon, Van der Poel's Inflite CF SLX frame comes in at just 940g, which is certainly impressive for a disc-brake cyclocross frame, and one of the most eye-catching features is the top tube design. Canyon says the fact that most of the top tube runs horizontally before kicking down to join the seat tube maintains space within the frame for easier shouldering while also allowing more seat post to be exposed for extra compliance at the rear end.

> Read our review of the Canyon Inflite CF SLX 8.0 Pro Race, which shares the same frame

The cross-specific geometry is intended to offer a blend of stability and agility, and you get clearance for tyres up to 38mm wide.

At the front of the bike, Van der Poel opts for Canyon’s CP10 carbon aero cockpit, designed to be very stiff and ideal for maximal cyclocross efforts.

The pedals are also from Shimano, this time in the form of its XTR mountain bike options. The last time we saw any of Van der Poel’s pedals close up, the central part of the pedal body was milled down slightly for extra mud clearance.

> Beginner's guide to cyclocross - get muddy, get fit (and get a new bike) 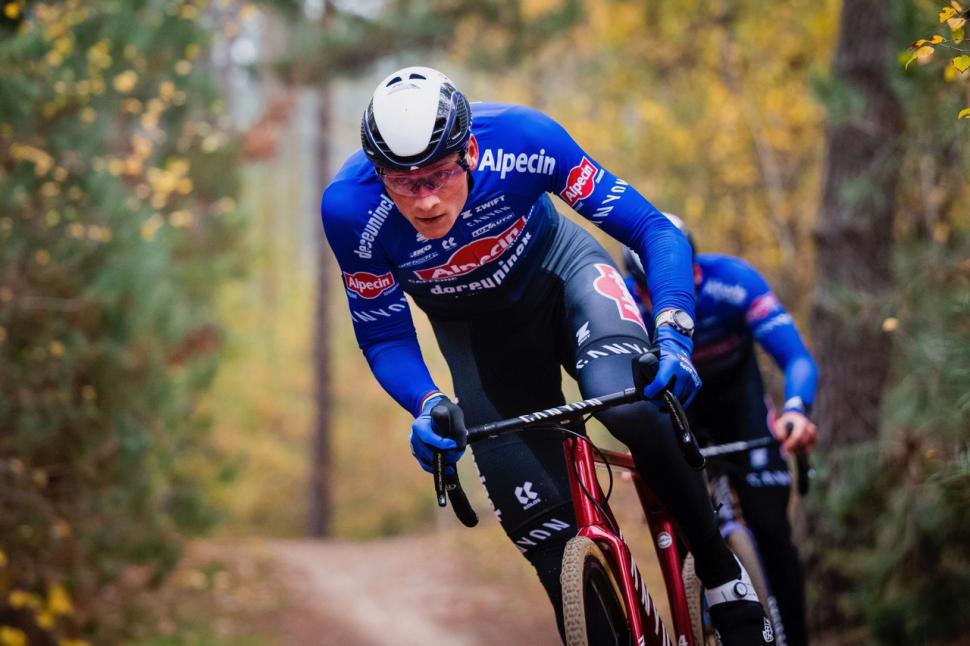 For those unfamiliar with the demands of cyclocross, the amount of running and discounting of the bike means that riders will use those mountain bike pedals with matching shoes. Although you can’t see them well in any of our pics, Van der Poel uses Shimano XC902 shoes with a claimed weight of 590g (size 42).

They feature Shimano’s Ultread XC rubber outsole with widely spaced rubber knobs that are designed to dig into mud and provide plenty of grip. The white upper might look cool but we’d be inclined to go for the black or blue version unless someone else is doing the cleaning.

Van der Poel's has a busy cyclocross schedule for the next few weeks, interrupted twice by team training camps in Spain with the Alpecin-Deceuninck road team. The plan is for him to peak for the World Championships in Hoogerheide, Netherlands, on 5th February 2023.