The WorldTour peloton has just been ranting round the Yas Marina F1 circuit. I did that too.

It's not until you stop that it really hits you. The heat. The humidity. It's like a slap in the face. It's no wonder everyone stays inside the whole time.

But it's not often you get to ride around the full length of a custom-built Formula 1 circuit. Unless you live in Abu Dhabi, that is. In which case you can do it every tuesday night.

The United Arab Emirates is a pretty conflicted place, cycling wise. On the one hand there's a rapidly growing interest in professional cycling, and world-class sporting events in general. The Dubai tour debuted in 2014, and we were in Abu Dhabi for the launch of RCS Sport's second tour in the country: The Abu Dhabi Tour attracted a strong field, and the UCI have tacked an end-of-season Cycling Gala on to the week as well. It looks set to muscle in as the new season closer. They flew in Mark Cavendish for the launch and he was just as enthusiatic about the race in the hotel lift as he was in front of the cameras.

On the other hand, cycling infrastructure is basically non-existent and attitudes towards cyclists from those in cars seem to be even more hostile than we experience in the UK. Two thirds of Emirati adults are clinically obsese and that, along with diabetes and heart disease, account for a quarter of all deaths in Abu Dhabi. There's now a Walking and Cycling Master plan but there's not much evidence of it on the ground as yet. 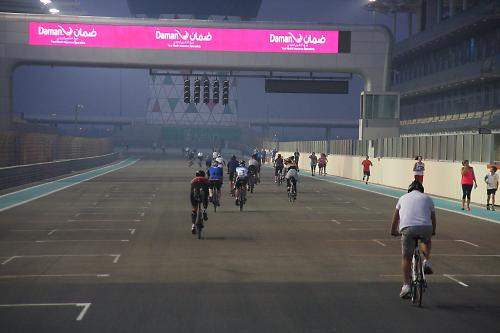 The programme at the Yas Marina Circuit is a response, or at least part of a response. Organised by the circuit in conjunction with Activelife, a health and wellness initiative, it's been running since 2010. Some of the riders from Yas Cycles, the local bike shop, were the first to try it out. "I got a phone call one day from a friend at the Yas Marina: how would you like to come and ride round the circuit? we're thinking of opening it up", Aubrey Roberts, an ex-pat who moved out to Abu Dhabi from Gloucester, told us. "That first night there were about six of us, just rolling round on our own. And they were asking us: do you think it'll catch on?" 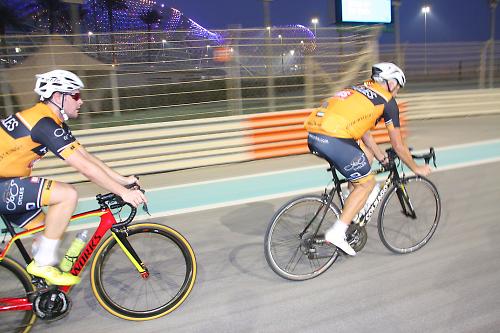 And catch on it certainly has. Now the Yas Marina circuit is open every Tuesday night, from 6pm to 10pm. A sportive-load of people turn up every week. A thousand, at least. The most they've had is 4,300. And it's the full gamut, from triathletes honing their position on full-spec race bikes to the normal clothes brigade on upright hybrids. Everyone. And if you don't have a bike? Well there's 50 you can borrow for free at the moment, with another 400 coming soon. Entry is free as well. Soon there'll be a women-only night too.

There's plenty of room on the 5.5km circuit, although you do need to keep your wits about you if you're moving fast, as some of the riding discipline on show is, well, patchy. If you fancy pulling across the whole width of the circuit to take a selfie in front of the extraordinary Yas Viceroy hotel, that the race circuit passes under, well. Knock yourself out. And me, nearly, while you're about it. You soon get tuned in to the general disorder. 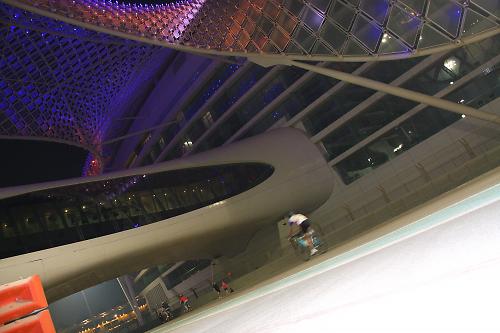 But the heat. Damn. There's no getting used to that.

"They tell me you do get used to it", said Dave Hanson, who moved out only a month ago to work at Yas Cycles. Before that, he was at Red Kite Cycles in Solihull. "It's a baptism of fire, quite literally". Others I talk to take a different tack. "Everyone says, you'll get used to it. But you never do. Not really".

In the winter the mercury's in the late 20s and it's a drier heat, perfect for long days in the saddle. But it's not the winter yet: the temperature is hovering around 35° and it's humid. So close. Just rolling round the car park to check the loan bike fits is enough to get me sweating. 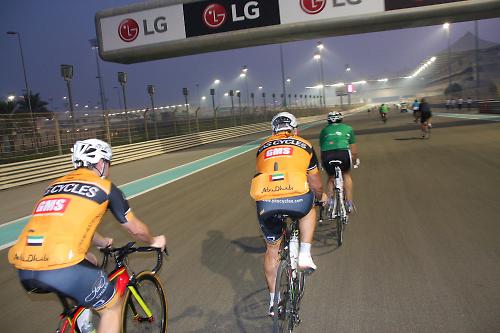 Once we're on the circuit it feels a bit surreal to roll on the hallowed Formula 1 tarmac. Down the home straight between the grandstand. Under the hotel. Catching a glimpse of the yachts in the marina. And roll we do, for a bit. But you know what it's like. There goes the pace line. There goes the reserve. Sprint on: okay if I sit in? Take your turn on the front, feel the legs burn, swing off, latch on the back, sit in again.

But it's hard. The pace high, and my heart rate higher. Rolling round the Yas Marina at chatting pace is one thing, but as soon as you start to raise the effort it ramps up so quickly. Just like training at altitude, the short ramps in the circuit have me gasping for breath, my head thumping. There's enough rise and fall in the five-and-a-half kilometre lap to really make it hurt when you're out of your comfort zone.

I'm wearing a red Abu Dhabi Tour leader's jersey, skilfully blagged from the launch just beforehand. So I'd better represent. At least a bit. I manage a lap and a half before the pace takes its toll and I'm hanging off the back, at which point I decide to cut my losses and take a few pics of the hotel myself, before killing the pace and enjoying it for a couple of warm down circuits. Although by the end, I haven't warmed down much. I'm just warm.

I managed a 9-minute lap which is respectable, rather than good. The peloton were flying round it in under seven, at an average of up to 50 kilometres an hour, for two and a half hours. And then you'll need to have saved something for the sprint finish. It's another world.

Thanks to the chaps from Yas Cycles for the wheels to suck!