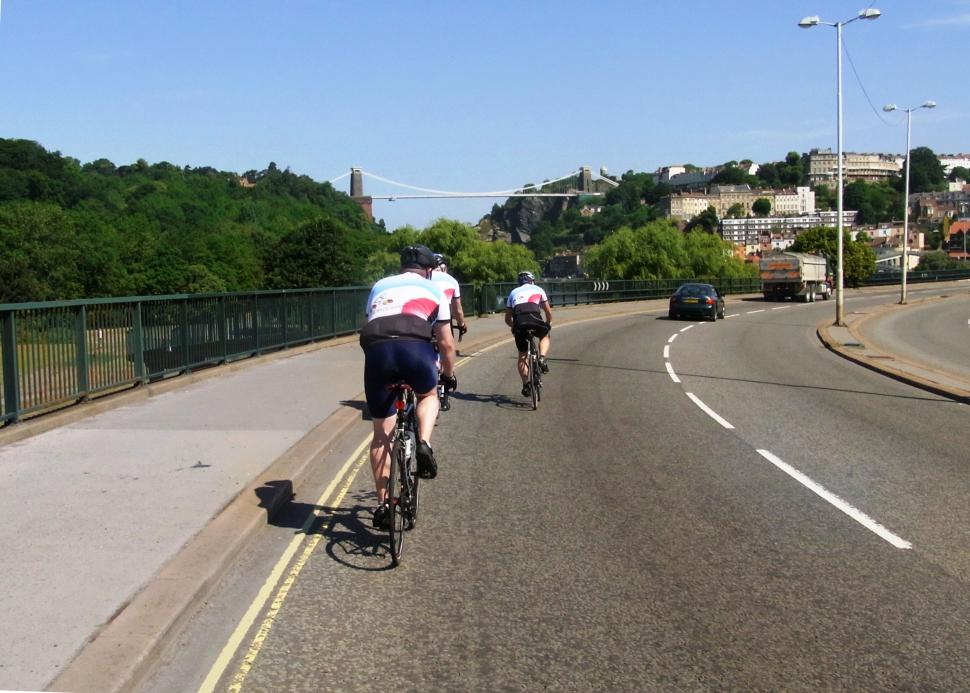 Day two of the TRAT ride started in Taunton and finished 153 miles away in Telford. We climbed 5400 feet and managed a 15.5 mph average (any one of these figures could be wrong, by the way. I was only told them five minutes ago but my brain appears to have turned to mush).

But the figures – impressive though they are (to me anyway!) when added to yesterday’s numbers – only tell part of the story. Today was about accumulated discomfort and actually quite a bit of pain; it was about stroppy drivers, mechanical mishaps and navigational challenges. The weather was tougher than yesterday too – the temperature reached 100 degrees at one point around lunchtime, and the last 30 miles or so were completed in the rain, albeit a rather lovely refreshing shower kind of rain. And for me, the icing on the cake was the realisation that I hadn’t after all escaped my daughter’s cold as I’d tried so hard to do before the ride. My throat started tickling last night and I woke to a thick head and runny nose and all the other delights that come with a summer cold. Not ideal really…

But before I go any further, let me introduce you to my riding companions as I promised I would yesterday. In alphabetical order we have…

Canon Ed Condry (57) from Canterbury, who is like the bionic vicar on a bike (an old-school Trek, since you ask). One of Ed’s defining characteristics is that he seems pathologically incapable of allowing other cyclists to overtake him. Today a young fellow on a mountain bike sped past the peloton with a rather smug look on his face and Ed was after him like a terrier chasing a rat. We watched the pair of them duelling furiously for half a mile or so before Ed reeled him in. When I caught up with him he revealed that he’d been doing more than 30mph when he finally bagged his prey. The man’s a fruitcake! He’s a very nice fruitcake though – and he’s managed to raise as much sponsorship money as the rest of us put together (around £13,000) so it’s probably illegal to say anything negative about him even if I could think of anything (which I can’t).

Simon Cox (39) from Bristol, who is also a jolly nice chap but who is in danger of being associated forever – in my mind at least – with a rather potent and foul-smelling wind issue. I’ve been unfortunate enough to be caught behind him a few times when his guts have got the better of him and let me tell you it’s really not a very nice place to be, however brisk the breeze. He also rides a Trek and is the only one of us with a proper old fashioned Brooks saddle under him (possibly the only one he could find built robustly enough to withstand the onslaught).

Mark Croucher (39) from Hounslow – yet another very pleasant fellow (actually, let’s just assume they’re all very pleasant from here on shall we? Because they are). Mark has probably undergone the most dramatic transformation of any of us during his training. At the start he was on a rather lardy hybrid and I don’t think he’d mind me saying that he couldn’t really keep up, but now, many hundreds of training miles later, and a size or two down in shorts I reckon, he rides a Cannondale Six and more than holds his own.

Martin Hart (57) from London. Martin’s one of three riders who have done the TRAT before and is therefore regarded with some awe by us newbies. Martin was unfortunate enough to have his bike nicked shortly before the ride and is thus using an old Klein - with shifters on the downtube and everything! When it comes to keeping us greenhorns in check and looking after the group on the road, Martin is most definitely the man.

Darren Maine from Weston Super Mare. I’ve just realised I don’t know Darren’s age but I’m guessing late thirties (very late...). Darren is either a very good friend or perhaps even a relative of Simon’s. He too rides a Trek but his wind issues – while certainly in evidence – are a little less alarming than Simon’s. He’s taken to calling me Goat, about which I have mixed feelings if I’m honest. It started as mountain goat, because I do like a climb on the bike, but somewhere along the line the mountain bit was lost and I don’t think plain old Goat sounds quite as cool somehow. In any case I think he’s being disingenuous. I think he’s far more of a climber than I am. I haven’t managed to shake him off on any climbs so far but he’s left me behind more than once.

Mike Rainton (64) from Oulton Broad in Suffolk. Mike has done the TRAT no fewer than three times already – once when it was still completed in five days rather than the current six – and is thus certifiably off his rocker. He rides a very elegant old Cannondale and always manages to overtake me on descents even when I’m as aero as an Exocet. I don’t know how he does it really. Mike had such a moving encounter with one of the sports massage therapists on one of his previous TRATs that he goes all misty-eyed whenever they’re mentioned. There's even talk that the massage is the thing that keeps him coming back year after year. I believe he may be downstairs as I type being treated to a massage so there may be fresh stories tomorrow…

Howard Sansom (41) from Harrogate. Howard has also done the TRAT before, once as a rider and once as a support team member. He is one of those extraordinary people who manages to combine being a relentless joker with having a very responsible and sensible side. So he’ll keep the group in good shape on the road – calling for us to alert each other to hazards and generally keeping us out of harm’s way – while simultaneously having us all chuckling with his relentless barrage of puns and double entendres. His bike is perhaps the pick of the bunch – a Specialized Roubaix S-Works.

Matt Stevens (34) from Windsor. Matt’s some sort of sports medicine wizard, with his own practice in – I think – Kingston or Richmond or some such affluent London suburb. He’s an ex-rugby player who must be at least 6’4” and 14 or 15 stone (and we’re not talking lard here) so we know we can safely get into whatever arguments we want with errant motorists (and goodness knows we’ve had a few of them over the last couple of days) and if they get stroppy we can just set Matt on them. He wears ludicrously yellow cycling shoes, which come in very handy when the light starts fading but for the rest of the time are a bit of an embarrassment I’m sorry to say. He rides a pimped up carbon Cannondale Six with bizarrely expensive handlebars.

I’m now so exhausted that I can’t bring myself to tell you anything about the day’s ride, beyond the fact that it was really physically demanding and involved various low-key adventures (getting lost in various medium-sized provincial towns, falling out with various idiotic motorists, climbing rather more hills than we were expecting, and having to deal with a broken chain). But mainly it was physically demanding, so I’m off to bed.

An introduction to the amazing support team who have been looking after us so well will follow in the coming days.

One thing I do have to mention is that we were treated to a delightful surprise at lunchtime, when a group of young South Africans from Johannesburg performed scenes from a play called Zanadule that they’ll be performing in London and Gloucester over the coming weeks. Based on the snippets we saw as we ploughed through our monstrous pile of sandwiches I’d recommend seeing them if you can. You can find out more by emailing ashacentre [at] yahoo.co.uk.