Cycling and the law: What are your rights if you suffer an accident on icy roads? winter cycling cold (Tejvan Pettinger).jpg
Mark Hambleton - specialist cycling advocate - takes a look at what cyclists should know if they have an accident on the ice this winter.

A lot of people, me included, rely on their bike as their primary mode of transport on their commute. It is very much part of my weekly routine, whatever the weather.

I certainly ride more cautiously in freezing temperatures, and generally have the luxury of sticking to main roads or bus routes where I can be confident the roads should have been gritted. Highway authorities categorise roads depending on their size and importance. Often bus routes and roads providing access to hospitals are top priorities.

Many cyclists do not have this luxury and rely on cycle paths, or they cycle in less urban areas. The odds of them coming across icy paths or roads that haven’t been gritted are much higher – and so is the risk of coming a cropper because of the ice.

It’s practically impossible to see ice before you hit it so the only way to guard against it is to take a view on whether or not to cycle in the first place. This is not such an easy decision to make if you don’t have alternative means of transport. The consequences of hitting ice and falling off can be serious  – a fractured collarbone or shoulder is not uncommon.

I often receive phone calls and emails from cyclists asking about their rights when snow/ice has caused them to fall. So, what are your rights?

The different viewpoints when it comes to ice on the road

You might see things in one of the following ways:

What does the law say about accidents on icy roads?

The highway authority (often the local council) has a duty to ensure (as far as reasonably practicable), that safe passage along a highway is not endangered by snow or ice.

The fact that you suffer an accident caused by ice or snow on a road which has not been gritted does not necessarily mean that a claim for compensation against the local authority will succeed.

Why? Well, a route isn’t necessarily dangerous simply because you had an accident. You must go further and establish that the ice was the sort of danger that the local authority was reasonably expected to guard against. In assessing this, the court will look at the extent of the ice, whether there were other accidents and the extent and manner of the use of the road/cycle path.

If you get over this hurdle, the onus shifts onto the highway authority (to defeat your claim) to prove it took reasonable care to ensure the highway was not dangerous.

If the highway authority can prove that it took reasonable care, your claim is likely to fail and you would not be compensated for your injuries, damaged bike and equipment, or your other expenses; such as private treatment, time off work, or paying for alternative transport.

The following points are likely to be most relevant when considering whether the highway authority took ‘reasonable care’:

You can see that these cases are very fact-specific. Broadly speaking, if your accident happens in an area where the highway authority implements a sensible gritting policy, prioritises the routes to be gritted and acts reasonably given its financial constraints, your claim is unlikely to succeed. 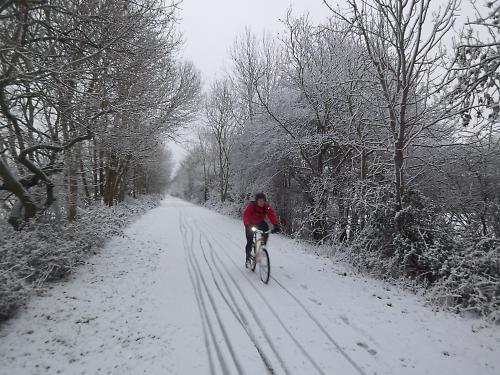 To avoid opening the floodgates to claims of this nature (there would be a wider application to pedestrians and motorists) it is not surprising that it is so difficult for cyclists to succeed with claims for damages following accidents caused by snow and ice.

It’s annoying that the main routes used by motor vehicles are the priority and therefore the perception that motor vehicles should be our primary mode of transport is reinforced. I really think local authorities should set aside a proportion of their gritting budget for keeping popular cycle paths and cycling routes safe for those of us who prioritise cycling.