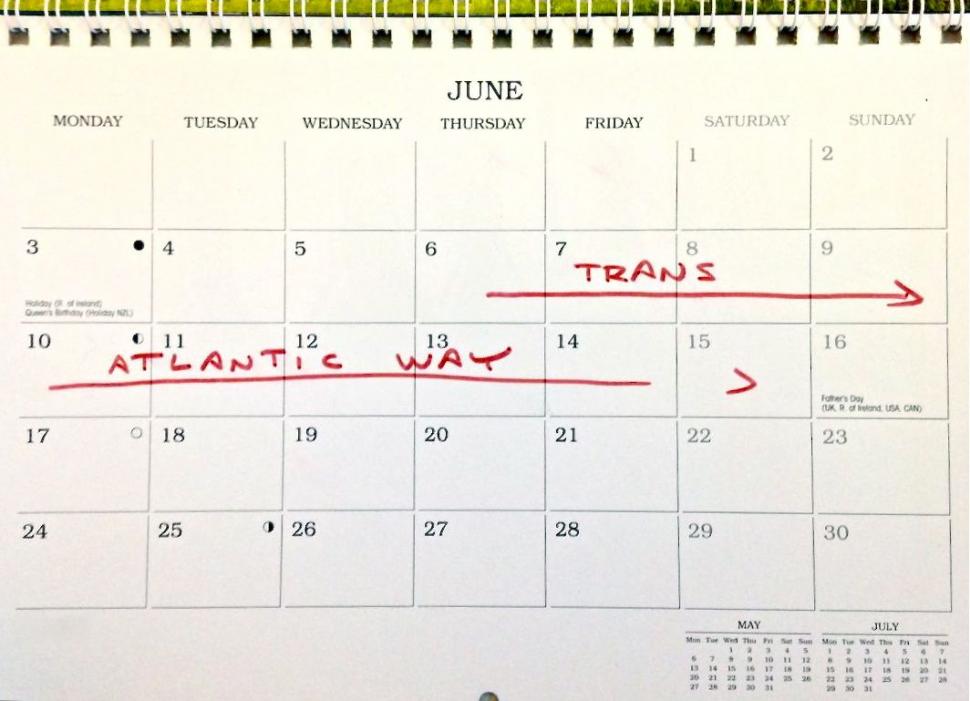 I’m not one to make new year resolutions, preferring instead to make better mistakes on a daily basis, and I tend to view looking back under similar less reflective terms, but next year needs to be better. This year didn’t go to plan.

2018 was going to be all about the TransAtlanticWay for me, a natural ricochet from attempting the TransContinental the previous year and only getting half way. I’d put the disappointment of that behind me, used all of everything that I’d learnt in the process and was happy to move on positively. That idea lasted until the first week of the year where - long story short - an initially terrifying but ultimately not in any way worrying medical condition took every puff of wind out of my sails. The lengthy and stressful process of prodding, poking and waiting for the next prod and poke to eventually lead to the humdrum prognosis took up all the mental effort and space that should have been spent focusing towards a 2,500km race, whilst the uncertainty of the problem meant the necessary physical preparation took a beating as well.

It was the hardest and yet most common sense e-mail I had to send to the organiser to let them know that despite paying my not inconsiderable entry fee I wasn’t able to compete. Then I had to pass on a similar message to the bike related people that help and support me in such matters. They were universally understanding and dismissed my apologies that I had let them down somehow, I could pick things up later. It is only a bike ride after all.

Stop. Rearrange plans for the year, by making no real plans. Carry on.

Working towards an endurance event like the TransAtlanticWay, TransContinental or any of the similar endurance races that are sprouting up all over is the sort of thing that absorbs your entire life. Prepping for the TCR No5 took months of planning with my Pairs partner Gavin; on top of upping the bike mileage there were daily conversations about route planning, equipment choice, training ride ideas and food. It was all encompassing. To have this sort of thing occupy your head and then have it swept from underneath you is hard, very hard, it leaves a desperate emptiness and there is the double-whammy that as well as the year ahead feeling wasted all the graft you’ve put towards it up till now has been futile. Even though you know it will come in useful at some point later right at this moment it feels like it’s all been a glorious misuse of time.

Bumble aimlessly along the bottom for a bit before taking a deep breath and beginning the long slow crawl back up to where you were before, and then beyond.

Having to cancel landmark rides and put life on pause brings with it a strong undercurrent of bubbling angst that I am not getting any younger (well, none of us are, just sometimes it feels like old is getting faster), time is slipping away and there is a nagging whisper that I can’t afford to throw away years like this if I want to do all the things that I want to do. I am in my fifties and while this is no excuse, age never should be, everything just gets that little bit harder year on year despite your best protests. Bouncing back from a long ride, a tough ride or a race is never as easy as it was when you were younger and grappling your way back from a more serious setback takes a concerted amount of effort, positivity and playing the long game. You learn to adapt, adjust your expectations, work within your abilities, employ your strengths, and listen to your body; spending time on body maintenance is as important as hours spent on the bike just to be able to keep ticking over. I’ve spent enough mornings trying to get up from the ride before evaluating my life choices whilst immobile and face down in the pillow and I still feel the gut desire to keep doing this. Giving up or easing off is not an option. Whilst I feel like I might be running out of time I also feel like I’m just starting to hit my stride. This is accompanied by a deep and mildly ironic sigh.

Luckily my itinerary for the rest of the year allowed little chance for woe-is-meism and I had no option but to pedal my bike and just get on with it. On the plus side this meant that the year wasn’t a write off for the sake of canceling one event and enough bike riding in fantastic places was done to render missing the TransAtlanticWay race almost an insignificance and I slowly spun my way out of my low point. There was a constant systems checking, with a keen eye on any flickering warning lights; is that tired, ill, or just getting on a bit? Some times it was a sluggish crawl, others a determined drag up by the fingernails, and enough moments when concentrating on the fuzzy in the distance end goal and knowing that the only way out was through kept the wheels going round. Finally in the cold midst of December it felt like my body was back to where I wanted it to be. That, that was a good day.

Like not making resolutions I am not someone that believes that things happen for a reason, shit happens and how you deal with it and come out the other side is entirely up to you. As a result of a year that started with being comprehensively kicked to the floor, booted whilst I was there and then clawing my way back has put me in a significantly better place in both head and legs than this time last year. Imagine some sort of “It's not how many times you get knocked down that count, it's how many times you get back up” motivational gubbins here…

I have entered the TransAtlanticWay again for 2019, and it’s going to happen. It had better do, it’s all part of the plan for the following year.