Things appear to be winding down on the Haute Route as the penultimate day is a simple one, a trifling 78 km from Pra Loup to Auron, up a hill, down a hill, then an insignificant bump up to the finish. Unfortunately that one hill happens to be the Cime de la Bonette, which at 2802 metres is the highest paved road in Europe, and there’s about 20km of climbing to get to the top. Ah. 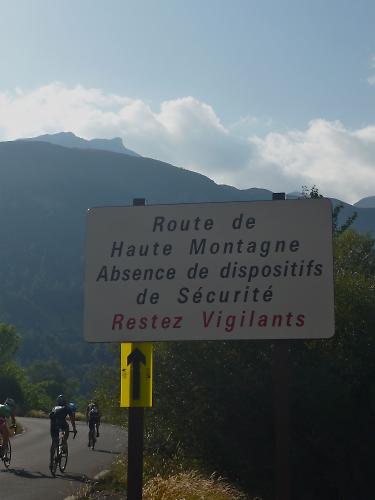 From our al fresco breakfast at Pra Loup we’re shepherded down the hill and back the way we came yesterday squeezing up the valley to Barcelonnette where the pace car leaves us to our own devices at the bottom of the Bonette. It doesn’t take long for the road to stretch away from civilization and we’re into real mountains where riders naturally settle into their pace and place on the road for the day’s singular effort. It’s yet another beautiful morning, and still early enough to be cool in the sun pierced trees, the road twists and feels it’s way past huge fists of rocks and if you look up you can see threads of cyclists seemingly gliding their way up the road that continually switchbacks above.

As we climb the trees thin out and the landscape fades into open grassland with huge monuments of mountain above and the odd lake for picturesques sake, and as we trudge up even higher this gives way to a backdrop as the old man who stopped to look at our bikes on the way to breakfast this morning said “comme la lune”. With about 2 hours of climbing involved and a tough week lying heavy in the legs it’s all starting to hurt and we are prisoners of the air, both in its force and its weakness. It’s pretty blustery up here, there’s not much to get in the way I suppose, and each switchback is met with the helpful shove of a tailwind or the struggle of riding into a solid air wall, which is made doubly hard as with about 8km to go the effects of gentle altitude kick in and any effort beyond plodding is punished by sudden breathlessness, light-headedness and slight stars, whooooo. We shared last night’s apartment with a young guy who had borrowed an oxygen tent for several months in preparation for the event and moments such as these, we thought he was taking it all a bit too seriously, but then he casually mentioned he was in about 6th. Right you are. 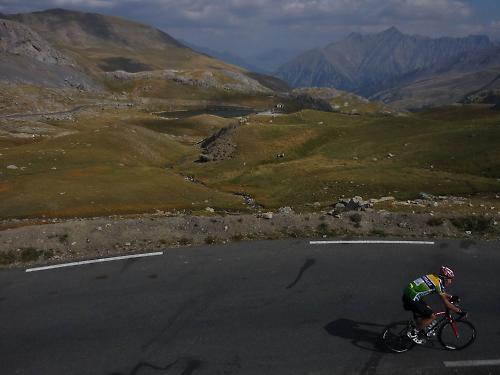 The last few kilometres are an effort with the road crawling it’s way up the huge black featureless lump of mountain, and the view to the right offers up wave upon wave of barren mountain tops, it’s like nowhere else I’ve cycled, a strange, barren and breathless yet somehow beautiful dream. The last little loop that’s been added just to make the road the highest through-road in Europe could easily be avoided as there’s a tantalizing gap in the hill on the left where the summit road loops round to meet itself again, just nipping across would save some time and effort, but the gap is filled with marshals, policemen and spectators so there’s no wimping out of the final push. Urge on to the highest you can be without getting in a plane, and with a few hundred metres to go the road kinks sharp left and ramps sharply up as the engineers ran out of mountain to fit the road on. You can see people’s knees gently crumble.

The view from where the tarmac tops out is outstanding, and there is a lot of view to be outstanded by, you are literally looking down on everything, or at least most of Europe, it’s large, bleak and frankly too much to absorb right now. And it’s blustery, so there’s just time to grab some snacks from the feed station, grab your breath back from the wind and put a jacket on for the descent, which is the most frightening thing I’ve ever done on a bike, period. Not because the road is steep or overly twisty or un-barriered but because today is spectacularly windy and I’m running deep-section carbon rims. I get a portent of what’s to come about a kilometre down from the summit, remember that a gap in the mountain where the road meets itself again? There’s a sudden gust through there and the wind punches my bike from one side of the road to the other. Jeezzzzzusfuk. For some reason I suddenly remember that rider in the Tour De France when it came over here a few years back, he was a no-name domestique doing well on the day until he didn’t make it round the first corner of the descent. How the hell did he survive, there’s a long way to fall down this black featureless mountain. Red kit, that South African based team? There’s no time to waste trying to remember names, I need all my wits just to hold on. All the way down the hill the wind treats me as it’s plaything, leaning into corners it will either suddenly let go or push harder making the bike do all sorts of funny, and not so funny, things, and heading into one left hand turn I get buffeted almost to a stop by the wind bouncing off the cliff to the side making the front wheel shimmy underneath me like a drunk aunt at a wedding. Thankfully it’s not just me and my questionable downhilling skills, I pass another deep-sectioned rider further down the mountain who is visibly terrified and literally inching his way around a bend, I shout encouragement but I don’t think he hears me above the wind and the noise of his fear puckering open and shut staccato. As I fall down the hill the wind finally abates enough to enjoy the descent, although there’s enough headwind to make it a battle all the way down into Saint Etienne De Tinee. There’s a final clacking of gears and it’s a insignificant and easy 5km climb up to the finish at Auron which for no apparent reason totally destroys me and I am deeply deeply weary when I cross the line and just want to fall asleep.

Thank god there’s only one day to go.