There’s been a bit of a stutter with the project, just like all projects seem to suffer, shuffling all the parts together, waiting a bit, getting distracted by other stuff, but the hiemal grip is still tight and cold and dark so it’s still officially a Winter Project, and there’s still a lot of time to be spent hiding in the shed for while. “Strictly…” may be over, thank God, but “Come Dine With Me” seems to be on constantly, Lord save me. The eagle-eyed amongst you will have noticed the CXD fork has changed colour, Dom from Kinesis shared my colour-matching awkwardness with the black and the blue of the original fork sitting awkwardly against the red bits of the wheels and found a spare white one kicking around to ease my artistic whiney angst. With its subtle red detailing it’s much much better already. And 2mph faster. 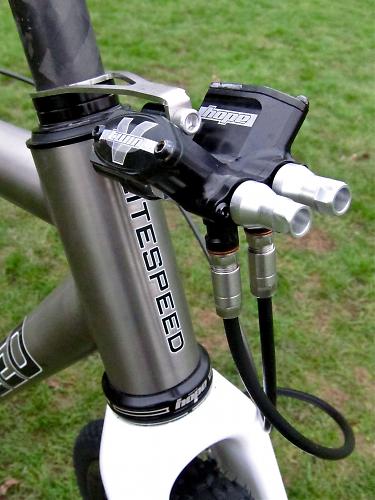 As well as supplying turning duties with their headset Hope are taking care of the stopping with their X2 disc brakes with V-Twin converter. Discs on ‘cross bikes, and road bikes for that matter, are the hot topic right now and the battle of the big boys to be first to the bar with an integrated hydraulic road disc brake system has been won by SRAM with their version breaking cover late last year. But it looks like it might be a while before we can actually get our hands on SRAM’s offering so I’ll have to make do with the Hope V-Twin under the stem cable-to-hydraulic converter. Although saying “make do” is doing it a massive disservice, it’s helped win more than enough cross races over the last season or two including this year’s somewhat testing Three Peaks and it also means I’m not manacled to the SRAM gearing system and can use something else, which in this case is Shimano, who’s shifting I prefer to be honest. So that’s good. Which leads nicely to the Going choice. Obviously it would be nice to bolt Dura-Ace Di2 on there to make the build all bling but these are tough times and 105 is more than just fine. It’s only going to get muddy after all and if I squint a bit I can convince myself that the black of the 105 groupset goes better with the black/white colour scheme of the Litespeed than the blue-grey or silvery sheen of Shimano’s higher end groupsets. Yeah. The chainset is Shimano’s CX specific CX50 with 175mm cranks and a 46/36 chainring combination so there’s no need to put up with an awkward too big or too small compact road gearing arrangement or faff about changing rings to suit. Matched to a 12-27 at the back it should see my legs up pretty much anything. There’s a KMC chain on there, well, because I like KMC chains and they have that split link which makes taking off and cleaning after yet another gritty ride a simple task whilst the tea’s brewing.

Only the sitting and holding bits to get now, and find a pretty way to route that rear brake hose, nearly there, just in time for the tail-end of Winter. Oh.