40 days in the wilderness 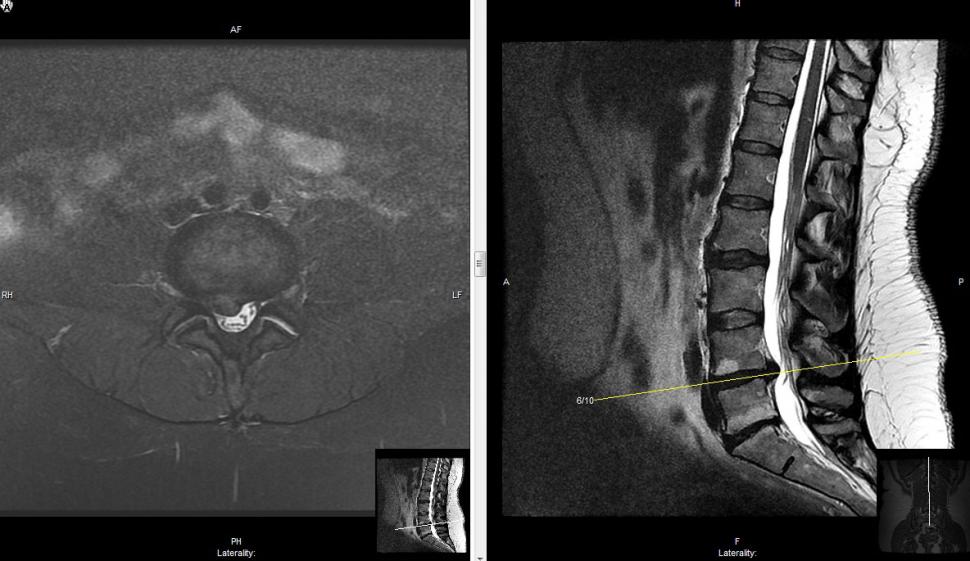 Backs, eh? I'm back though. Time to set some goals.

It wasn't his fault though. The consultant likened it to a rope going over a pulley. "It starts to fray, in time", he said. "One day it snaps. It might be under one pound of load, or 100. It's not the final load that's the issue, it's the years of wear". Those years of wear culminated in a lovely ride round the back of Bath with Sir Chris, before which my back had already been playing up for most of the year. And after which things went rapidly downhill.

He shows me a picture of my back. It looks a bit like the one up top. These discs are fine, "like a teenager's". That one's a bit bulgy. That one's popped. There's the nerve. See how that nerve has a nice white space around it? See how that one doesn't? That's why you were chewing your pillow for a week on Tramadol, and why your leg still hurts, and why you still can't go up on tippy-toes on your left leg, six weeks later. Your brain thinks your leg is messed up, because that's where that nerve goes.

I've learnt a bit about discs. They're tough little buggers, and they're filled with hydraulic fluid under huge pressure, 300psi and more. If your back is a bike, they're your back's tyres. I've got a puncture. Tyres wear out. Once the gunk comes out, you can't push it back in. You can dig into the spine and suck it out to give the nerve some room, but that's a last resort. You can have an injection to calm things down, which helps some people all the time, and some people some of the time, and some people none of the time. I'll wait a bit to see if I need to go there. But mostly it's just a case of waiting it out.

So it was 40 days off the bike. But the good doctor encouraged me to get back on, so that ended today with a slow, painful crawl to the office. The weeks of inactivity have not been kind to my fitness. Or my bathroom scales. But it feels like a new start. So it's time to make some new goals. Here they are:

1: Lose the weight I've put on, and then some more weight. I'm a big guy. The lightest I've been in my cycling life is 96kg, but I'm 10kg over that right now thanks to months of fairly complacent living followed by six weeks of enforced inactivity. The first goal is to be back in double figures, then that all-time low. Then I need to keep going. 90kg is more my race weight. And I need a race weight, because...

2: I'm going to start racing. Specifically, I'm going to start Cat 4 racing on the circuit British Cycling have so kindly constructed right round the corner from my house, and which Sir Chris was in town to check out on his bike launch tour. Realistically any kind of racing is months down the line for me, which probably means starting next year. But that gives me a decent window to get myself into shape, and a winter to do some proper conditioning work. My goal for next year's racing season? A point. One point. Small steps and all that.

1
Near Miss of the Day 362: Punishment pass while beeping horn
2
Parcours launch the Strade 'next generation' aero wheelset, with different rim profiles for front and rear wheels
3
Cyclist seriously injured at New Forest crossroads highlighted as blackspot after two riders were killed
4
Chris Froome to return to racing at UAE Tour next month
5
Warning to retailers after two bike shops targeted by turbo trainer thieves this week (+ video)
6
Ere Research launch new disc brake wheels that “are close to the ideal aerodynamic shape” when used with its tyres
7
Near Miss of the Day 358: Close pass while cycling with kids
8
Near Miss of the Day 359: Cyclist uses bus CCTV to get taxi driver prosecuted