Cycling from London to Barcelona: a more enjoyable LEJOG alternative? london to barcelona 9
Land’s End to John O'Groats has been a popular challenge for decades… but what about a sunnier option? Andrew Dalton makes the case for riding London to Barcelona, a route he’s completed twice

With many of us longing for the day when lockdown ends and we can start planning some epic cycling excursions again, road.cc reader Andrew Dalton's suggestion of a jaunt from Britain to Barcelona certainly looks like one to add to the bucket list - and most likely a sunnier option than one of the UK's most prestigious cycling challenges, Land’s End to John O'Groats.

> Isolated Incidents: What does it mean for cyclists to 'stay local'?

Compared to LEJOG, Andrew describes the route he has ridden twice with friends as "a similar distance, but with better roads, better weather, better food and a more fun destination"; and not only has he told us all about it below, but "in the boredom of lockdown" he also created a website with GPX files and Strava uploads for anyone wanting to tackle the challenge themselves.

"It is a bit rough and ready as I have never done a website before, and it is totally non-commercial. I would just like to encourage others to try what we found was a wonderful, uplifting trip", Andrew added.

With further ado, we'll let Andrew take it away with a breakdown of the journey...

"I have cycled from London to Barcelona twice (in 2009 and 2019) with groups of friends, and it seems to me a great alternative to the popular challenge of Land's End to John O'Groats.

We were new to long distance cycling the first time we did it, but enjoyed it so much that we have since done trips every year; until last year, when the pandemic made it impossible. On the 10th anniversary, we repeated the London to Barcelona route (with minor improvements) as it was still our favourite. It's beautifully scenic and offers better roads, less traffic, better weather, better food, and arguably a more fun destination than Land’s End or John O’Groats!

In the boredom of lockdown I created a website describing the route, www.bikelondonbarcelona.com. It includes links to the route day-by-day on Strava, from which GPX files can be downloaded. The route is tried and tested, based on the experience of our two trips. It sticks to tarmacked surfaces but goes out of the way to find quiet roads, even if they are a little less direct. 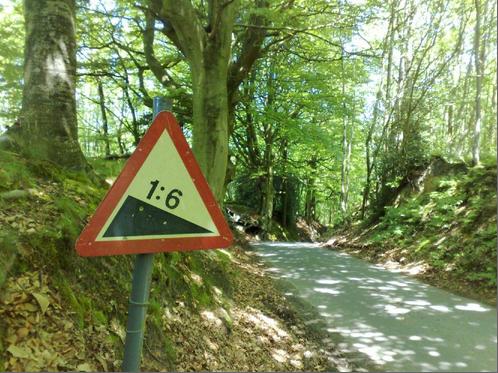 Both times we have started from Wimbledon. From there the first 20km or so are mainly quiet suburban roads. Just before Midhurst the route goes over Bexley Hill, which is very steep at the top. Weaving around most of Havant, a cycle route then takes you most of the way to Portsmouth docks. There is a final stretch of road to cross the peninsula to the ferry terminal. The Ship and Castle pub is right in the ferry area, and is a very practical spot to have some well-earned food and drink before an overnight crossing. 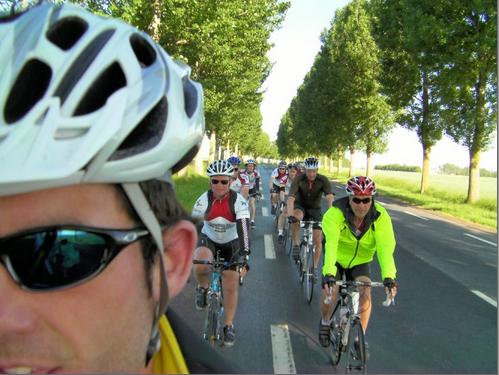 Over on the other side, the route starts with the gently rolling farmland of Normandy, which is similar to southern England but more open and spacious. It moves on to cross the Loire at Tours, and heads south to ever prettier countryside. Admittedly, on my first trip the route did cross a stretch of forest blocked by a barrier, and signs saying “Danger du mort” and “Tirs en cours”. The French army were not pleased that we didn’t wait for the barriers to be raised, but we did at least wait for the tanks to stop their firing practice... although to be fair, we thought it was just people hunting in the woods! The firing range has since been decommissioned.

It then passes through the Périgord, Limousin and Dordogne, with many picture-postcard villages and empty country lanes. France has a population density that is just over a quarter of England's, and you really notice the difference. There is so much more space, and it makes it easy to find quiet roads and unspoilt countryside. On the other hand, none of the countryside seems to have been abandoned, and you find vibrant villages and small towns scattered all along the route offering a good selection of cafes and restaurants. 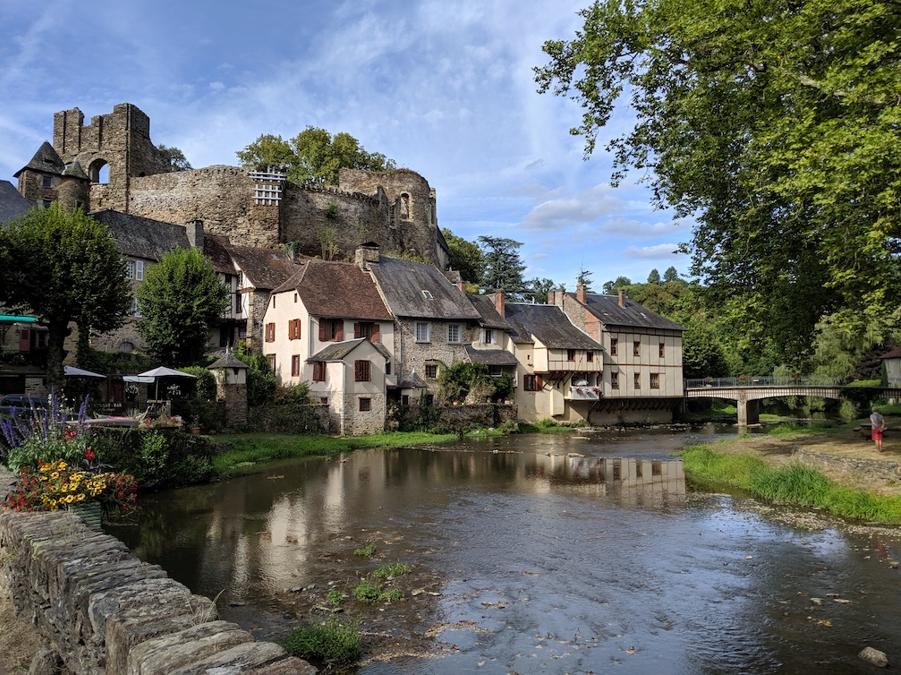 Ségur-le-Château, one of many picturesque villages en-route

As you go further south to Albi and then Carcassonne, the countryside has a dry, sun-kissed feel to it. Writing under lockdown in the British winter, I do long to be in southern France cycling on an empty road in the sunshine! 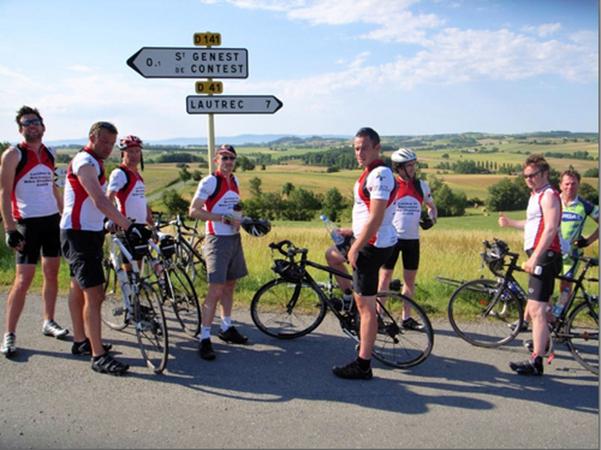 After Carcassonne the route enters the foothills of the Pyrenees, a mix of rocky hills and vineyards, before reaching the mountains proper.

One could skirt the mountains entirely, but the route I have used crosses at Col d'Ares (circa 1,600 metres) including a 13km climb averaging 6.6%. It's a good challenge for those not experienced at large mountain climbs (as we weren’t the first time), but manageable and steady. From the Spanish border to Barcelona there is plenty of descending, but also a few moderate climbs. Most of the way it's very quiet and pretty countryside. There are a few busier stretches as you get closer to Barcelona, but nothing too intimidating.

There is an excellent cycle path through a park that provides an ideal way of entering the city itself, and you can continue traffic-free all the way to the beach before grabbing a well-earned beer.

Here are a few more reasons for taking on this challenge:

The state of UK roads is shocking, and while the tarmac won’t be perfectly smooth all the way to Barcelona, the roads are by-and-large much better. The downside to this is that to maintain the roads they do have more roadworks; so you do come across the odd “Route Barrée”, but getting past them is part of the challenge.

As the UK is much more densely populated than France or Spain, finding quiet roads to take you from Land’s End to John O’Groats is a real challenge. Even most longer routes involve significant busy stretches, and while Scotland is not densely populated overall, in some of the less populated areas there are so few roads that it can still be difficult to find good routes. In contrast it's relatively easy to find empty country roads through France and into Spain. Also, on the continent, drivers are normally more considerate of cyclists, perhaps because there is enough space for everyone to get on. My experience in the UK is that many drivers are less sympathetic. 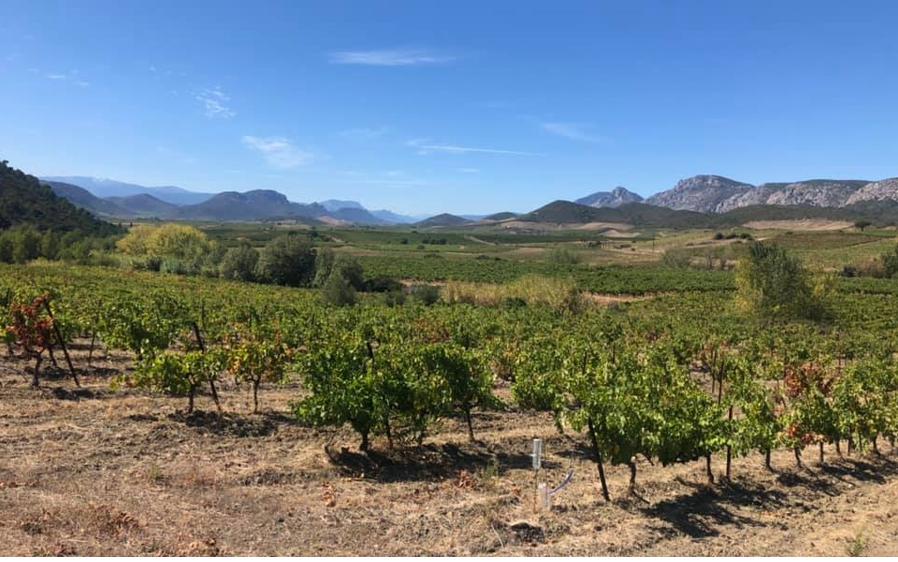 Better weather
Nothing improves a ride more than a bit of sunshine. Yes it does rain in France, and on one of my trips it we did have whole day of rain and cold. It was miserable, but you are less likely to get caught like this heading south to Barcelona than north to John O’Groats!

A better destination
There is not a lot at John O’Groats. Barcelona, on the other hand, is the perfect place to finish. Miles of beaches with bars and restaurants, right by the city centre. A city with culture, nightlife (if that is ever allowed again), a wide range of accommodation, and they have a reasonable football team apparently. There is even a good car-free route into town.

Feet in the sand with a cold beer... what better way to end a ride? 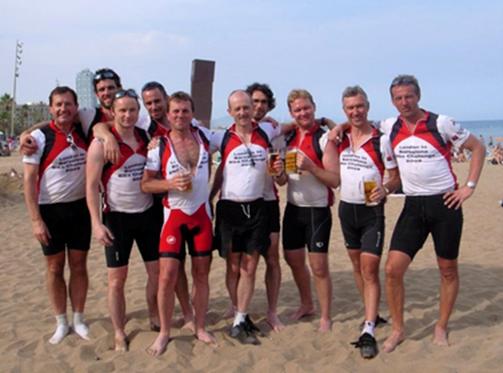 I cannot recommend the trip highly enough (assuming the current COVID restrictions don’t last for ever). We did it over 11 days, covering around 80 miles a day with a support vehicle. This may sound fairly relaxed to fitter readers, but was enough of a challenge for a motley crew of fairly inexperienced cyclists."

Do you have an epic cycling story to share? Let us know in the comments, on the road.cc forum or email us at info [at] road.cc