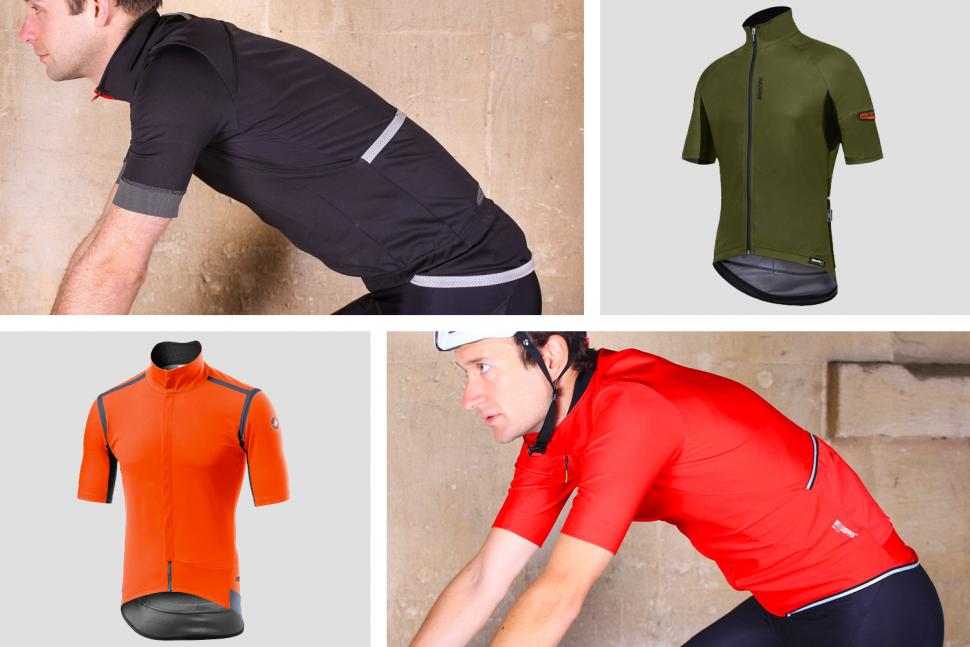 Choosing what to wear in summer and winter is fairly easy. In summer as little as possible; in winter everything you own. But autumn and spring, those transitional seasons of unpredictable, changeable and often wet weather, are far more challenging. The last few years have seen the development of a new style of jersey that makes deciding what to wear at this time of year far less tricky.

In this updated version of our guide to wet-weather racing & training jerseys we've added the Galibier Sentinel Foul Weather Jersey.

Ever since a particularly cold and snowy edition of Milan-San Remo in 2013, Castelli’s Gabba jacket has become the de facto choice for cyclists wanting a top layer that can cope with unpredictable weather, the sort that is common through the spring. While ideal for the changeable conditions of spring, the Gabba, and its many imitators, is ideal for winter and autumn too, making it a very good three-season jersey.

Defined by its figure-hugging fit (because it’s designed for racers who don’t want the bulk of a traditional hardshell waterproof jacket) with a windproof and water-resistant Gore Windstopper fabric, the Gabba paved the way for a new breed of cycling jersey that could cope with a wide range of conditions, keeping you protected from the rain and insulated against the cold, but breathable enough to cope when the temperature rises. The Gabba was created when professional racer Gabriel Rasch had the idea for a waterproof racing jersey that could be paired with Castelli’s Nanoflex Arm Warmers (arm warmers with a special water resistant treatment). It proved so popular that other teams, not sponsored by Castelli, were clearly seen wearing the jacket during that snowy edition of Milan-San Remo, and social media almost went into meltdown.

It’s fair to say the Gabba has gone on to define a whole new category of clothing, and there are now many imitators and alternative versions. They’re classed as jerseys, rather than jackets because they offer the fit and comfort of a jersey, but some of the protection that you would have previously only got from a jacket.

Here is a look at some of the alternatives including, of course, the Gabba. It's 10 years since the first Gabba and for its birthday Castelli has beefed it up a touch with Gore-Tex Infinium 205 on front-facing surfaces for a bit more warmth, taped seams on the shoulders for better water-resistance and redesigned pockets that Castelli says are easier to access when wearing winter gloves.

This fourth-generation jersey — RoS stands for 'Rain or Shine' — boasts the full set of original Gabba features too. There's a dropped tail to cover your bum and lower back, silicone gripper tape in the waist band to stop it all riding up and a high-quality YKK zip with a storm flap. Originally only available in black, it’s now available in a raft of bright colours.

At a claimed 255g, the Gabba RoS is also lighter than the previous version, but if you want something lighter still for warm but wet weather, check out the Perfetto RoS Light.

Read our review of the Castelli Gabba 2 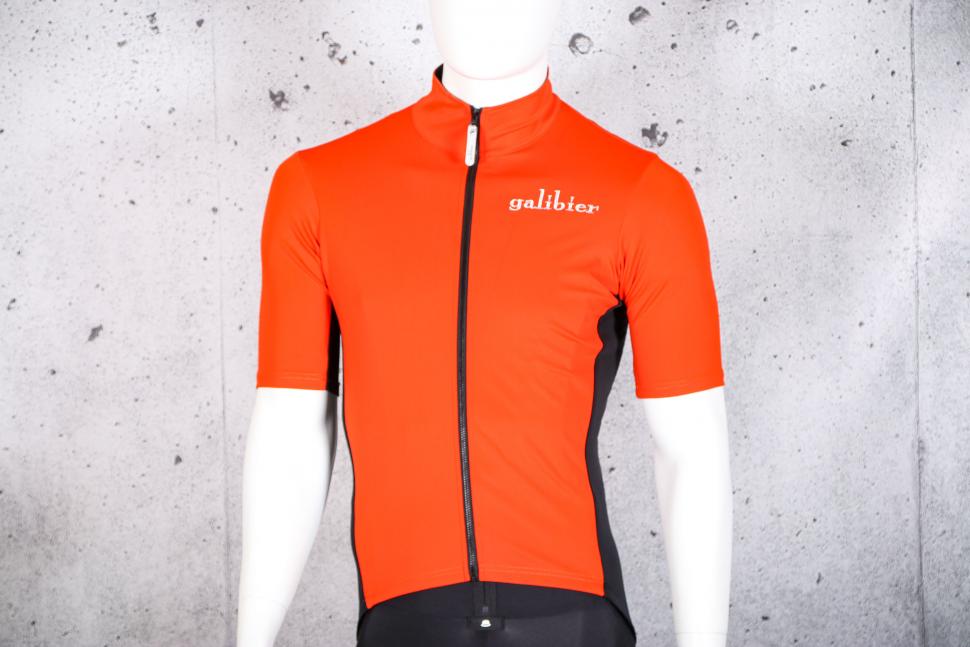 The Galibier Sentinel blurs the lines on what defines a jacket and jersey thanks to its mixture of weatherproofing, lightweight race styling and short sleeves. It's not a new concept, but one that Galibier has executed very well indeed, and at a relatively bargain price.

Technically, the Sentinel is a jersey according to Galibier, and it's designed to work with just a baselayer, within an outdoor temperature range of 7-16°C.

Tester Stu says: "It's been difficult to test the upper end of that range, what with it being the middle of winter, but I'd say that is a fair assumption of what's suitable. I've worn it on days when the temperature has got up to 13°C and been comfortable, only getting a bit over-warm when pushing on the hills.

"At the other end I was fine down to about 5°C with just a summer baselayer underneath and a pair of arm warmers before I could start to feel a bit of a chill."

Read our review of the Galibier Sentinel 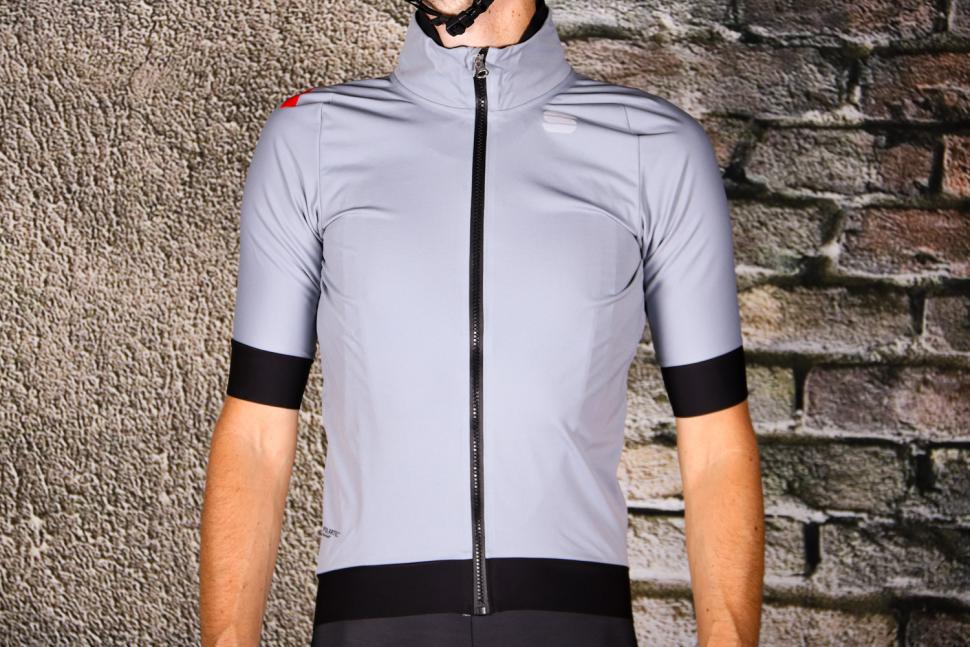 Sportful calls it a jacket but with its short sleeves and super-close fit this version of the Fiandre Pro, er, upper-body garment blurs the line between jersey and jacket even more than the Gabba. It uses the same excellent material as its long-armed brother and brings with it even more three-season versatility by giving you the option to wear arm warmers or not. It's a fair chunk of money, but take its performance into account and it's well justified.

The majority of the Fiandre Pro is constructed from Polartec's NeoShell fabric, which is waterproof and windproof but has the supple finish of a softshell, which makes it more comfortable to wear than a hardshell rain jacket.

If you are out in the rain, water just beads off the surface, and thanks to its 10,000mm hydrostatic head rating, it will resist heavy showers and prolonged rain for hours before it is finally breached.

Technically, the Fiandre Pro isn't fully waterproof because not all the seams are taped on the inside – those running down the sides from under the arms, for instance – but to be honest it makes little difference as they tend not to be taking the full assault of the rain as you are riding into it.

Read our review of the Sportful Fiandre Pro Short Sleeve Lusso's  Version 2 Repel Corsa Short Sleeve Jersey is is ideal for the spring or autumn months thanks to both its resistance to the elements and its being impressively breathable and comfortable when the temperature starts to rise. It's well priced compared to most of its direct competition too... Gabba 3 anyone?

Even in heavy rain the fabric continued to keep the rain out. It gets to a point where it is no longer beading on the surface, but it doesn't get through. It's breathable too and you avoid that boil in the bag syndrome until at least the mid-teens centigrade.

Read our review of the Lusso Repel Corsa Jersey V2 Santini uses a Windstopper fabric, a shiny, smooth-feeling material that stops wind and light rain from leaking through, and it’s designed to cope with a 10-20°C temperature range. It’s designed to be versatile, it can be paired with matching arm warmers, and it does cope admirably in the rain, the water beading along the surface. Overheating worries are dealt with by mesh panels under the arms and a regular lycra fabric, rather than Windstopper, is used for the rear panels to aid breathability.

Read our review of the Santini Beta Belgian company Bioracer uses its own Tempest fabric to make a jersey that is designed for a temperature range between 5°C and 18°C, and in the company’s own words, “bridges the gap between aerodynamics and thermal insulation”. The Tempest fabric has a special treatment applied during the weaving process that forms a water repellant barrier, and because it’s woven, and not a surface treatment, it’s long lasting. It’s also breathable and fast-drying. Bioracer produces a lot of club kit and this one can be customised to match your club or team colours and design. Endura’s FS260-Pro SL Classics jersey has been tested and developed by the Movistar team it sponsors, providing valuable feedback from some of the toughest races and most demanding athletes. It’s a short sleeve jersey intended to be used with arm warmers, so you can adapt to warm temperatures and avoid overheating. The jersey is constructed from a softshell fabric with a thermal Roubaix underarm panel, which Endura claims is lightweight, waterproof, windproof and highly breathable. The fit, as you’d expect, is cut for a racer, so it's a close fit. There’s a dropped tail, three pockets and a soft lined inner collar.

Read our review of the Endura FS260-Pro SL Classics The Mossa is an Italian designed and manufactured race-fit waterproof and windproof jersey. Parentini uses a Windtex Storm Shield laminate fabric to make the jersey, and it is breathable and wind resistant. The updated Mossa provides a slightly more relaxed fit than the previous Mossa jersey, but it’s still a close fit, there is no excess fabric to flap in the wind. Features include two rear pockets, a high collar, reflective logos and an elasticated waistband. You’ll notice that the Gabba, and other similar jerseys, are made from Gore’s Windstopper fabric. This is Gore's own version, in a three-layer fabric that in some conditions eliminates the need for a layer underneath. It's is made for riding hard in cool conditions. The Windstopper material does a lot to keep you warm but it also breathes really well. The fit is good too, with stretch just where you need it, though our wasp-waisted tester have done with a slightly more tapered waist. The price is very high compared with similar designs.

Read our review of the Gore C7 Windstopper Softshell Jersey

Our guides include links to websites where you can buy the featured products. Like most sites we make a small amount of money if you buy something after clicking on one of those links. We want you to be happy with what you buy, so we only include a product if we think it's one of the best of its kind.