Tomorrow sees the start of the Tour of Britain, now in its seventh edition since the multi-stage race around the country was revived in 2004 and which in previious had been variously the Milk Race, the Kellogg’s Tour and the PruTour. As final preparations are made with the riders gathering in the North West ahead of the Grand Départ in a little over 24 hours’ time, here’s road.cc’s guide to the teams and the route of the race that will unfold across the country over the next eight days.

Despite clashing with the Vuelta, this year’s edition of the race, which is sponsored by The Prostate Cancer Charity, is one of the most star-studded yet, with a host of Olympic and world champions, current and past national champions from around the globe, stage winners from all three Grand Tours as well as riders who have worn the leaders’ jersey at races including the Giro d’Italia and the Tour de France.

With many riders using the race as part of their final preparation for the World Championships in Melbourne which start in less than three weeks’ time, and others seeking to build their form ahead of the Commonwealth Games in Delhi early next month – indeed, several are competing in both – the racing should be fast and furious. Expect them to be going for it from the moment the flag drops in Rochdale to get stage one under way tomorrow to the end of Stage 8 in London where 12 months ago Barloworld’s Michele Merlo took victory on the Embankment (pictured below). 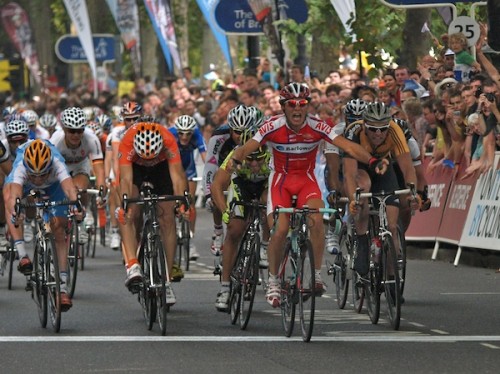 Last year’s overall winner, Edvald Boasson Hagen, then of HTC-Columbia, who also took the sprints and points competition, isn’t in the Team Sky line-up, and Thomas de Gendt of Topsport-Vlanderen, winner of the mountains jersey, is another absentee, but there are plenty of strong contenders who will be vying to succeed them over the next week or so. Here’s a quick look at the riders taking part from the five leading teams in the race, and an overview of the best of the rest. 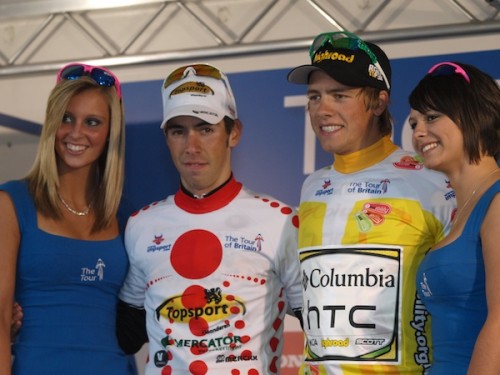 It’s been a difficult debut season for the much-heralded Team Sky, perhaps due to over-expectation on the part of the public, the media and the team’s own PR machine, but its tribulations on the road paled into insignificance last week with the shock death in Seville of soigneur Txema Gonzalez, with the British ProTour outfit, already depleted after an unrelated virus forced three riders to abandon the Vuelta, pulling out of the race the following day. 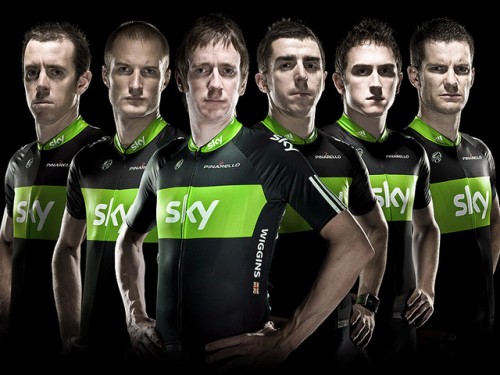 In the circumstances, a race on home roads is probably no bad thing, and Brad Wiggins  (pictured below in the one-off Rainforest kit Team Sky will be wearing during the race) heads a strong line-up including national champion Geraint Thomas, Russ Downing, who has more experience than most of the Tour of Britain although perhaps surprisingly he has yet to win a stage, and Kiwi Greg Henderson, who according to reports coming out of race HQ has arrived pumped up and raring to go.

HTC-Columbia’s Mark Cavendish may be leading the points competition in the Vuelta a Espana, but what a team the US ProTour outfit has sent to the Tour of Britain. Sprint finishes in shorter multi-stage races are bread and butter to Omega Pharma-Lotto bound André Greipel – he’s won 15 of them this year, and along the way scooped the points classifications in the Tour of Turkey, the Vuelta a Mallorca and the Volta ao Algarve, plus the overall win in the Tour Down Under, as well as a stage victory in the Giro d’Italia.

The German (pictured below in last year's Vuelta) won’t lack for team mates to help deliver him to the business end of the race at the right time, with Bert Grabsch, Tony Martin, Michael Albasini, Marco Pinotti and of course Cavendish’s usual leadout man Mark Renshaw helping to make up what is possibly the strongest team in this year’s race; all six riders are likely to ride in the World Championship Road Race next month, with only Pinotti unsure of his place as new Italian coach Paolo Bettini delays naming his line-up until closer to the mid-September deadline. The day after the Tour of Britain ends in London marks a year to the day since Jonny Bellis almost lost his life in a scooter accident in Italy, and three months ago the prospect of him competing in a multi-stage race seemed a distant one, and the fact he’s here at all is testimony to his determination. The 22-year-old Manxman can expect a warm welcome from British crowds.

Another rising star in the Saxo Bank line-up is the Tasmanian Richie Porte, winner of the young riders’ classification in this year’s Giro d’Italia, where he finished 7th overall and spent three days in the race leader’s maglia rosa, while compatriot Baden Cooke is a past winner of the points jersey in the Tour de France. Alex Rasmussen, World Scratch Race Champion on the track, has also had some success this year in multi-stage races including two wins in the Four Days of Dunkirk.

The US ProTour team won the opening stage of last year’s race through Chris Sutton, now with Team Sky, and in the shape of Dan Martin and Robbie Hunter, who had to overcome some last minute issues with his visa but will make the start in Rochdale, have riders who can help the argyle flag fly high over the next eight days.

Martin (pictured below), born in Birmingham, represented Great Britain earlier in his career and was junior national road race champion before deciding to race under Irish colours, and has had a great season in 2010, winning the Tre Valli Varesini race in Italy and one stage plus the overall title in last month’s Tour of Poland, and has to be considered one of the favourites for the overall here. Cervelo TestTeam of course will disappear at the end of this season, and it’s good to see that all three of its British riders get the chance to ride their home tour before departing for pastures new. In the case of Roger Hammond and Dan Lloyd, they will be moving to Garmin-Cervelo for 2011, but Jermey Hunt, who is preparing to support Mark Cavendish’s bid for World Championship glory next month, needs to find a new team for next season. Don’t be surprised if the 36-year-old looks to get in the spotlight on Stages 4 and 5, which include his home roads in South Devon.

Heinrich Haussler, also Garmin-Cervelo bound, will be looking to put a disappointing season behind him. Injury prevented him from seeking to go one better this year on 2009’s second place to Cavendish in Milan-Sanremo, and aggravating that knee injury in a crash with the British rider during the Tour of Switzerland resulted in his absence from the Tour de France. Then, having committed his future to Australia, the country of his birth, instead of his parents’ native Germany, he was forced to pull out of the World Championships after acknowledging that he wouldn’t be in peak condition for the 263km race from Melbourne to Geelong.

While the five teams profiled above are without doubt the biggest names in this year's race, they will be joined of course by a dozen other leading British and Continental outfits that will be familiar to anyone who follows the domestic and European racing scene and each has riders who are capable of making an impact on the race.

The riders from Rapha-Condor-Sharp, Motorpoint-Marshalls Pasta and Endura Racing, the three teams that dominated the domestic calendar this year including the Halfords Tour Series, need little introduction, while among the European visitors, Netherlands-based Vacansoleil can boast their own Grand Tour stage winner in the shape of the Slovenian rider, Borut Bozic, who took a stage of last year's Vuelta.

The riders confirmed as racing for those remaining 12 teams are as follows: The 2010 Tour of Britain Route

Here's our stage-by-stage preview of the route - to look at the stage maps in more detail, go to the gallery at the top of the page and click on the relevant thumbnail, which will bring up a stage map you can zoom in on. Racing kicks off in Rochdale with a 126km dash to Blackpool prom taking in three climbs including the Trough of Bowland. The route snakes in to Cumbria before, if all goes to plan, the sprinters all do their stuff on the prom just in time for the start of the World Fireworks Championships… and why not Stage 2 sees the riders tackle a 100 mile loop of the six towns that make up the Federation of Stoke on Trent which is 100 years old this year, hence the 100-mile route. Again it's a typically lumpy affair, which should test the riders – the organisers are keen to make the race physically harder and to also make it harder for one team to dominate proceedings in the way HTC-Columbia did last year. 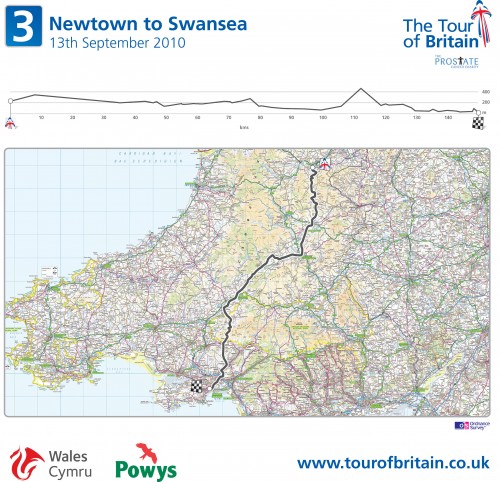 Stage 3 takes the race to Wales with a 150km run from Newtown in mid-Wales down to Swansea. This will be one for the climbers, with two first category climbs: one of the Black Mountain and the other of the legendary Constitution Hill in the final kilometere "this one won't be a bunch sprint" promises Tour Director, Mick Bennett. 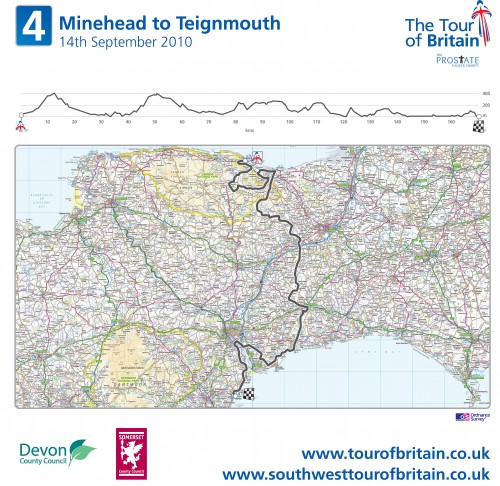 Stages 4 and 5 take the race into the West Country, today going from Minehead to Teignmouth on what again promises to be one of the toughest days of the race. We’re still in the West Country, and today’s stage takes the riders on a testing 176km route from Tavistock in Devon to Glastonbury via Dartmoor and the Blackdown Hills. 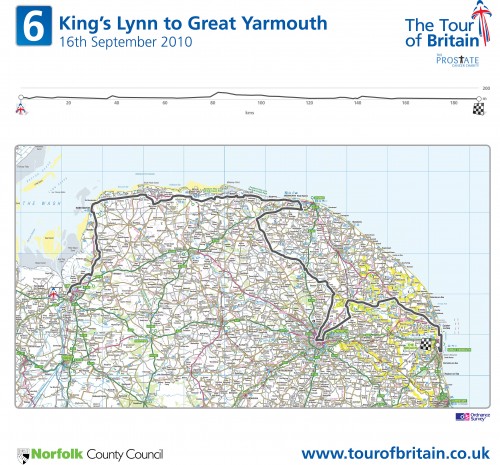 The transfer from west to east ahead of today’s stage probably won't be that popular with the riders, but the ones from the Low Countries probably will appreciate the flat (although organisers have managed to sneak in three third category climbs) and windswept 189km route that loops out to the North Norfolk coast and then heads south for the finish in Great Yarmouth. The wind blowing in off the North Sea could well play a part in this one. The race stays out east for Stage 7 too, but the 151km between Bury St Edmunds and Colchester won't be flat. Instead the riders will slog it out over the up and down country roads of Suffolk and Essex on what should prove to be a very sapping day in the saddle. 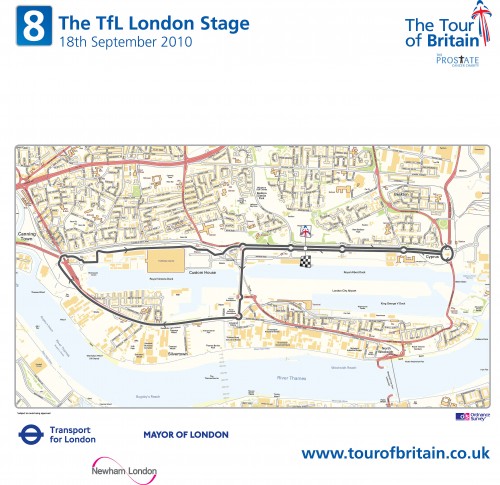 London is the location for the Tour of Britain's finale, but this year things will be slightly different - out goes the usual circuit of the West End as the Tour heads east to Newham. The Olympic Borough stepped in at the 11th hour when the security arrangements for the Pope's visit meant that the usual route for what is officially dubbed The TFL London Stage would not be feasible. Instead the riders will race around the Royal Docks for 100km - again we could imagine the wind could play a part in this one - things can get a bit blowy down by the Thames.

Full details of the Tour of Britain, including details of all stages including timings, can be found on its website.

There will be an hour's highlights of each stage on ITV4 the same evening, repeated at lunchtime the following day (timings vary, check listings for details).