Back to Features
feature
Travel
Riding 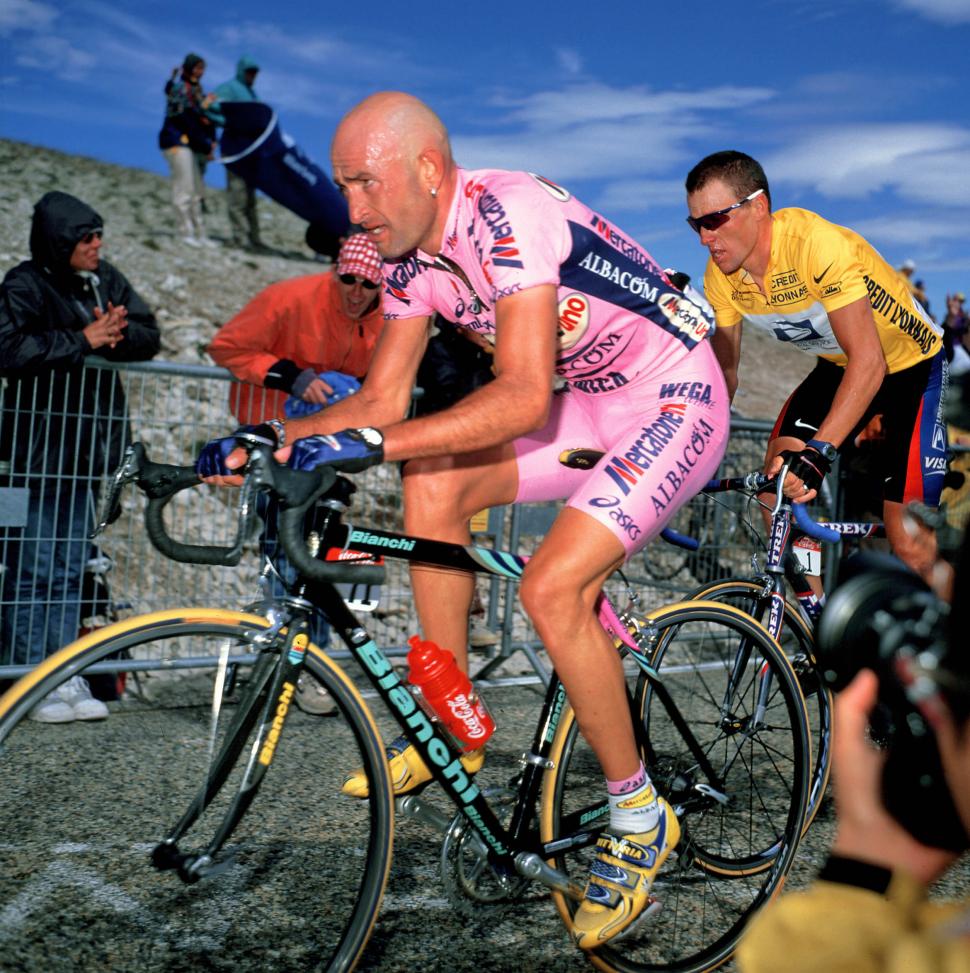 Nothing – not the severity of the ascent, the driving snow and ice or my non-cycling wife, was going to stop me getting to the top. I had driven 11 hours to get to Mount Ventoux and, with all my fellow riders having dropped out, there was just me – yards from the summit but on a track that had turned from warm tarmac hundreds of feet below into a covering of snow and ice. Tom Simpson died on this mountain in 1967 and I was here to pay my respects to him. The cold was freezing my hands and the wind threatened to blow me over the side of the mountain. But I couldn’t fail now.

Luckily, perhaps, I like climbing. In fact I really like to climb hills. I live amongst the Chilterns, so most of my weekly riding takes me up and over lots of short sharp climbs, which can rack up the vertical ascent quota quite quickly. My wife is from Wales, and this gives me lots of excuses to take a bike with us whenever we visit the in-laws, so I have grown used to climbing the mountains of South Wales, and all of this had given me a taste for riding mountains rather than hills.

After a riding holiday in Spain’s Sierra Nevada mountains I realised quite how nice it was to ride in a cycle friendly country, on quiet roads that allow you to just climb and descend all day. In between cycling trips I had taken a book to read – Put Me Back on my Bike – a biography of the doomed Simpson, and this sparked a strong desire to visit the mecca of road bike climbs that is Mont Ventoux.

So last year I managed to convince my very non-cycling wife that a short break in Provence would be nice, and not worry about the name of the bed and breakfast we were booked in – VeloVentoux – it wasn’t a cycling holiday, honest! With the bike stowed in the car and virtually all the clothes I packed being cycling clothes, my wife was starting to get suspicious…I acted innocent. After all those hours of driving we arrived at our destination, Faucon. It was late, dark and raining, so I would have to wait until the morning to get my first glimpse of my objective for the trip.

After breakfast we went out for a walk, and I pointed out the big mountain in the distance “that’s Ventoux” I said, now feeling fearful of the task to come. We took some photos of it and carried on up the hill to the top of the village. As we rounded a corner it became very obvious that what I’d pointed out before was a molehill compared to the monster that was now blocking out the view in front of me, “I think that may be Ventoux actually” said my wife. I went very quiet. The rest of the day was spent sight seeing, but my thoughts kept going back to that mountain.

The following morning was to be the day I rode it, so I tucked into as many croissants and as much muesli and bread and marmalade as I could stomach, and prepared for the off. The weather was overcast but not cold. I decided to wear tights and my jacket rather than just jersey and armwarmers. With the bike prepped I set off with a group of seven other riders that were also staying at the B&B, all feeling nervous but very keen. We rolled over a few small cols en route to Bedoin, the start village of the classic Tour de France route up Ventoux. We reached Bedoin village and followed the road signs – the first time they actually said Mont Ventoux – now knowing there was going to be at least an hour and a half of pain and suffering.

The beginning slopes start fairly easily as you roll through open fields, but already as the grade increased you could hear the click of gears as we all changed further and further up the block. Only two cogs left and we haven’t really got started yet. My group had whittled down to just three of us, the others dropped off the back and out of sight. We had all stopped talking and were just trying to get a rhythm going.

As we approached a tight bend going into the forest it became obvious that the road was about to start pointing upwards at a much steeper gradient. I swung round the bend to the sound of the clicking of the last two gears. ‘I’d better get used to this one,’ I thought, as I was going to be in it for the next hour and a half.

The climb takes on a very different nature once you get into the forest. You are shielded from the wind but the gradient is consistently around or above10 per cent for the next 10km. My group of three split up, with one rider dropping back and one going off ahead of me. He settled about 30 yards ahead at about my pace. I was turning a cadence of about 65rpm with no more gears to go, but feeling okay. There are kilometre markers on the climb, each showing the gradient of the upcoming kilometre which can start to get a bit intimidating as you realise this isn’t going to get any easier. 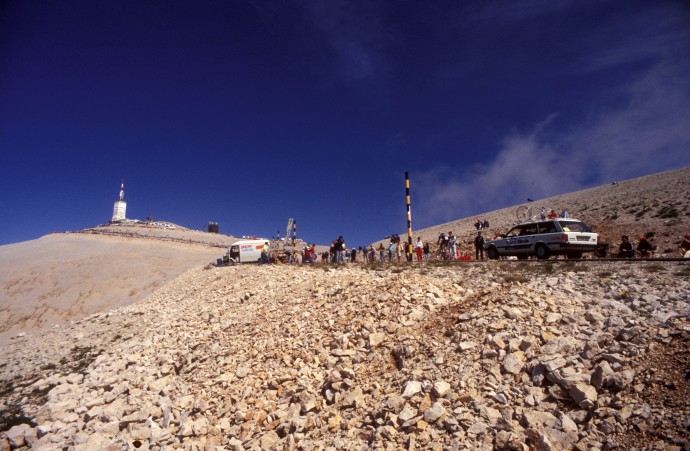 After about 17km of relentless climbing - no hairpins on which to rest, just a constant slog - you come out of the forest section and into the only slight let-up of the climb; Chalet Reynard, the ski station 6km from the summit. As I rode across the car park and over to the continuation of the road to the summit I caught up with my remaining group member. We came to a barrier that had been closed across the road to prevent cars going any further. The col was shut. We both ducked under the barrier and re-mounted our bikes ready to press on, at which point a French cyclist asked if we were going on to the top, I replied yes, and he said “then good luck” that didn’t bode well!

We both agreed to ride the last 6km together to the top, but the road ahead was starting to close in. The snow banks that were appearing on the sides of the road started to creep onto the road edges, reducing the tarmac available. After about another kilometre the wind had picked up to a howling gale, which blew the snow straight into our faces. We continued on, but the higher we got the more insane the weather became. The tarmac strip was now about three feet wide, the rest was snow and ice. We rounded a bend and straight into the full force of the wind, which physically blew my fellow rider to a standstill. We were about 3 km from the summit and visibility was down to about 10 yards at best. The wind was incredible and the sleet was really stinging as it blasted horizontally into us. At that point my riding partner decided he’d had enough and was turning back. On I went. I knew I was close to the spot where Simpson died, but I couldn’t see further than about 20 feet now and had no chance of ever seeing it. I doffed my cap anyway and pedalled on. The track was now just snow and ice, and I crunched my 23mm tyres through, having no idea how far to the summit but totally focused on riding until I hit the wall of the observatory.

I passed a building on my left, a café, at present boarded up against this weather and I got a very lonely feeling. As I rounded what turned out to be the last corner, a gust of wind blew me and the bike so hard that I was bodily moved sideways across the road by about 6 feet, which had me looking down over the edge of the road and the drop below. I pushed on and rode up the last very steep ramp to the observatory, riding in snow and glad to find enough grip to make it up.

I was very happy to have made the top, and sheltered against the wall of the observatory, at which point I realised quite how alone and isolated I was. I’d only seen one other person in the last 6 km and he’d gone back the way he came! The weather was now a howling blizzard and freezing cold, I tried to drink from my bottle and realised my lips had lost all feeling, as had my fingers, so decided getting back down was now a major priority.

The ramp down from the observatory was thick ice and straight into the worst of the wind, and the road cleats on my shoes meant that walking was a worse option than riding. I straddled the top tube of the bike and waddled my way down with the brakes full on; that was a scary couple of kilometres. I reckon it took me about 10 minutes to get down to a point where there was enough tarmac to allow me to sit on the saddle, still with brakes full on, and trundle down. After another couple of kilometres the road was wet but not icy so I started to let off the brakes with a real sense of relief, and a dawning of quite how reckless my pursuit of the top had been.

I flew down to the barrier that closed off the road – only just seeing it in time – and caught up with the others who had all regrouped at the Chalet Reynard. Inside was the most welcome radiator and cup of espresso I have ever encountered, and downed a second before starting to thaw out. The others were cold and I think that was made worse by not having reached the top. I was cold but a mixture of euphoria and relief meant that I didn’t feel it quite the same.

I put on a gilet under my jacket and set off for the descent, a flat out sprint from the Chalet Reynard into the road back down to Bedoin. From this level the weather was beautiful and warm and the sun was out. It felt like a different world to the one I had just come from 15 minutes earlier. I flew down the road overtaking a couple of coaches and a few cars, to some very puzzled looks from the occupants. A brief glance at my computer at one point said I was hitting around 50mph. I never wanted that descent to stop.

Back in Bedoin and life was going on as it normally does in a rural Provence village, while I felt amazing. The insane weather at the top had made what would have been an achievement at the best of times into an epic battle, of which I was the only participant and witness. I rode the 20 km back to the B&B and climbed into a hot bath then off out in search of food.

As a footnote I returned two days later on a lone ride which circled the base of the mountain, then went back up to the summit. This time it was glorious sunshine all the way, the summit road was open and it was a veritable motorway of cyclists grinding to the top, and not a hint of snow. The summit was packed with cars and coaches and the souvenir shop that I didn’t even notice existed two days before, was open to sell me a can of Coke. I got a bit of sunburn too. The descent was even better this time as I got to gun it from 6km further up.