Postcards from Paris: The Tour de France 2013 presentation in pictures

road.cc goes backstage - after a slight contretemps with security - at launch of 100th edition of cycling's biggest race
by Simon_MacMichael

The American songwriter Cole Porter wrote of loving "Paris in the winter, when it drizzles," but it's still autumn and there was little chance of Tour de France organisers ASO allowing the ever-blackening storm clouds caused by the Lance Armstrong affair to rain on the parade as they unveiled the route of next year's 100th edition of the race on Wednesday. Instead the 4,000 fans, people connected with the Tour and national and cycling media crammed into the cavernous auditorium of the Palais de Congres at Porte Maillot, halfway between the Arc de Triomphe and the Grand Arch de la Defense, got treated to a spectacular presentation of the 2013 parcours, plus a speech in which race director Christian Prudhomme railing against the drug cheats.

Alberto Contador, the other man to be stripped of a Tour de France title this year - just the one, mind, he still keeps his other two - must have shifted uncomfortably in his seat.

Two years ago, a month after it was revealed he'd tested positive for clenbuterol on the way to winning the 2010 Tour, Contador stayed away and Prudhomme, unveiling the 2011 race, expressed the wish the matter would be resolved quickly. Some hope.

This time last year, his case still no nearer resolution and another Tour de France under his belt - albeit the first since 2005 he raced and didn't win - Contador was back at the presentation, the looming and much postponed Court of Arbitration for Sport hearing casting a long shadow.

The Spaniard was one of four current riders to have won the Tour seated centrally right in front of the huge cinema screen where the race route was revealed - the others being Andy Schleck, runner-up to him in 2010 but now the holder of that title, 2011 victor Cadel Evans, and defending champion Bradley Wiggins. 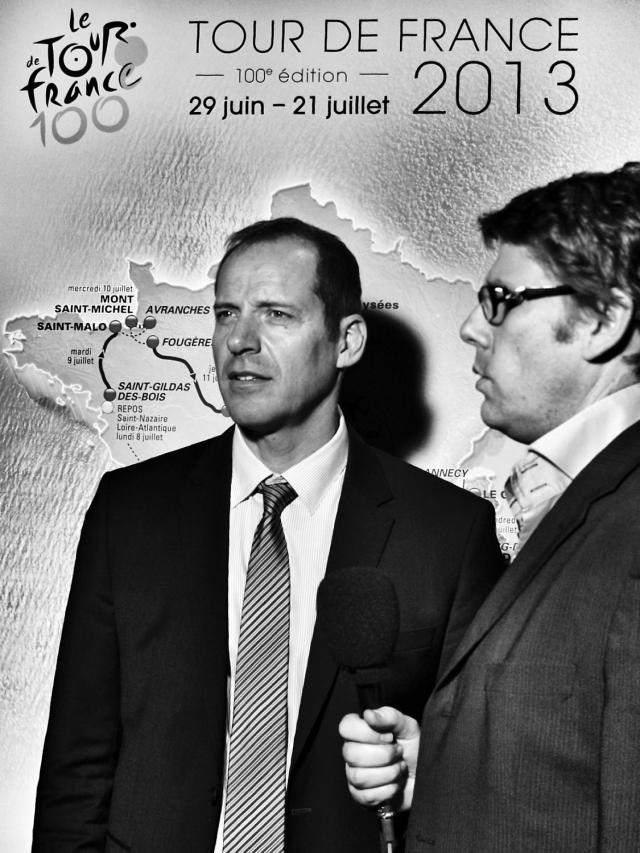 Prudhomme himself (pictured left) insisted that while doping was the enemy of the Tour, the race would prove stronger than its foe. While he certainly didn't shirk from blasting those who have blackened the name of the race in the past and pointedly calling on team managers to step up and join the battle, this was as much a celebration of a brighter future for the race than a look back at the past.

There was plenty of that too, of course, although of the man who stood on the top step of the Champs-Elysees seven times, Lance Armstrong, there was only the briefest of glimpses in one of the beautifully assembled video montages that proved that despite everything else, road cycling, and the Tour de France in particular, can be the most breathtakingly beautiful sport. 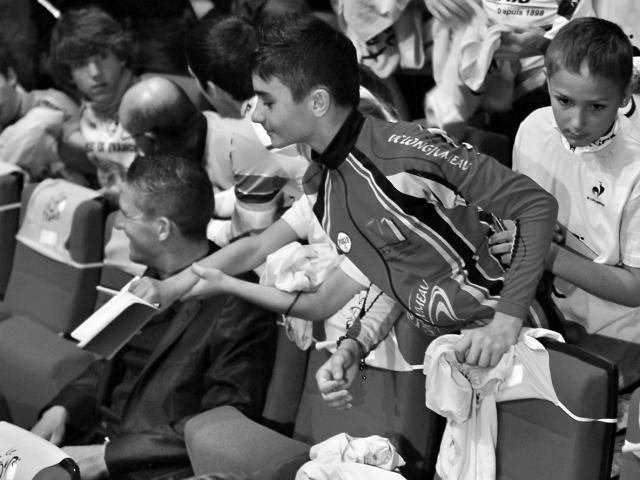 That hope for the future was encapsulated by the presence of dozens upon dozens of youngsters sporting the colours of the local cycling clubs they belong to - each was given a yellow Tour de France 100 t-shirt which most, but not all, wore, other taking pride in their club colours. Seated immediately behind the invited riders, it was an unmissable autograph opportunity for them, and a statement by ASO that the Tour is determined to look ahead, not over its shoulder.

Given the age range, pretty much all those kids must have been born during the Armstrong era, and while 'Lance' never features in the list of popular boys' name in France for the period, you couldn't help but think that there might be some poor little sod sitting there saddled with the monicker by a cycling-mad parent. 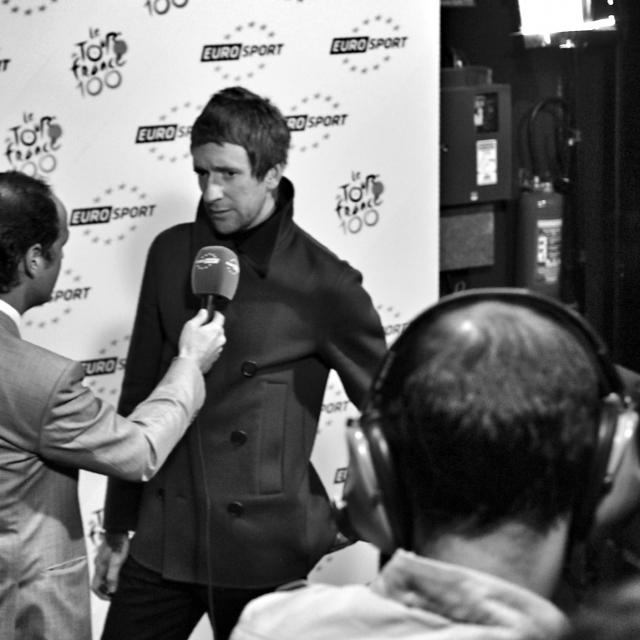 The presentation over, the fun and games began in earnest for the assembled press. Usually, there's a happy chaos to proceedings, and so far it had followed the script - a massive scrum of photographers and TV cameramen in front of the big names as they take their seats for the actual presentation, then pretty much everyone ambles up to the stage where groups form around individual riders, very good natured and informal and plenty of room for everyone - the stage, like the auditorium itself, is massive.

This year, it was different, however. Perhaps it was the presence of those huge raised numerals denoting '100' on the stage that made it impossible to conduct proceedings there, perhaps it was the sheer volume of press representatives, including a sizeable contingent from the UK, many drawn by Wiggins' victory of course but others no doubt by that other, more recent story intertwined with the Tour's recent history.

So instead of being conducted on the stage, the press work was all conducted in the wings to one side - fine if you were on that side of the auditorium when the announcement was made, not if you were on the other and found your way blocked by the venue's security guards due to the small mixed zone already being full to capacity.

Going round the back, we got tantalisingly close, but still no way through. Back round the front and we were still blocked. Then, spotting a gap with no official nearby - nor, it has to be said, any convenient steps - we clambered up onto the stage, through a gap in the curtain and into the chaos the other side, reminiscent of the post-stage melee round the maillot jaune's bus but with tripods rather than bikes to trip over. 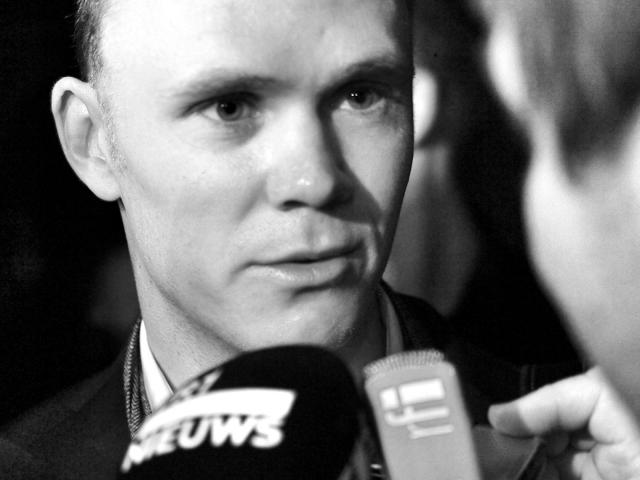 Sky haven't been big ones for the Tour presentation in the past, but with the reigning champion and runner-up in their ranks, and the departing Cavendish - who is a regular attendee, irrespective of the team he'll be riding for the following year - also picking up three stages, staying away wasn't an option this year.

Finally, here were the stories that the British press in particular had come for. Wiggins on what it meant to be Tour champion - for a start, there's the media attention that momentarily seemed to leave him overwhelmed as journalists and photographers crammed round him from all directions the instant he stopped speaking to Eurosport - Froome on the prospect of leading Sky in the race next year, Brailsford on how he would reconcile the ambitions of his two star riders. 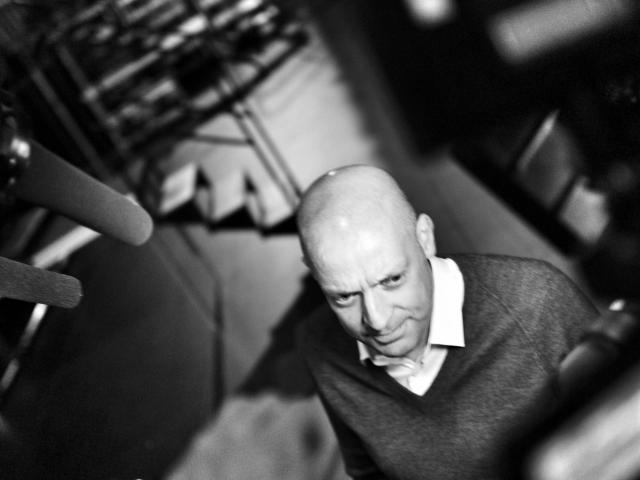 Over it all hovered the spectre of the Armstrong case. It's understandable that the current generation of riders get fed up with being constantly asked about it - Brailsford himself has said that he feels it's unfair that they should be asked to account for the sins of the past - but then again cycling is a sport in which Tour de France winners and world champions have traditionally been seen as figureheads and spokesmen both on the road and off it.

Now more than ever, fans need and want reassurance that the sport is cleaner, the media, accused of being ambivalent if not outright complicit in the past is asking some tough questions, and pretending that the issue belongs to another era perhaps gives rise to another form of omerta... not among those who dope of course, but among those who would rather not talk about it. Cheating still goes on, and it's unlikely the sport will ever be rid of it. It's an issue that can never again be buried or ignored. 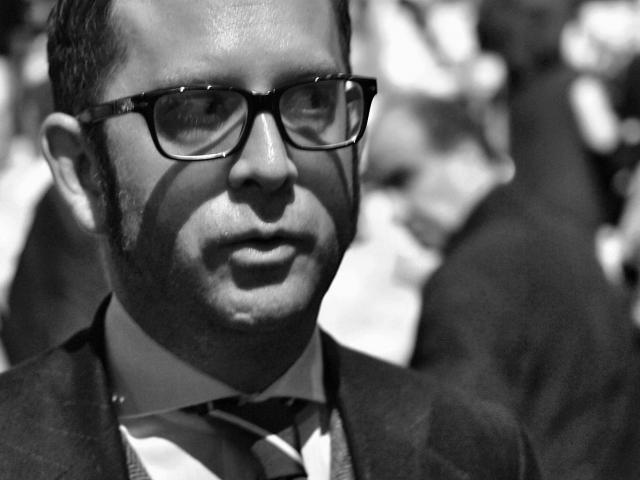 Back in the auditorium, immaculately turned out as ever, Jonathan Vaughters, one of those who recently confessed to doping but who for several years has worked harder than most to ensure a brighter future for the sport, was himself fielding questions. Following his own admission earlier this year and the subsequent revelation that three riders on his Garmin-Sharp team had provided affidavits to USADA, others  might have been tempted to stay away. Vaughters, to his credit, didn't. 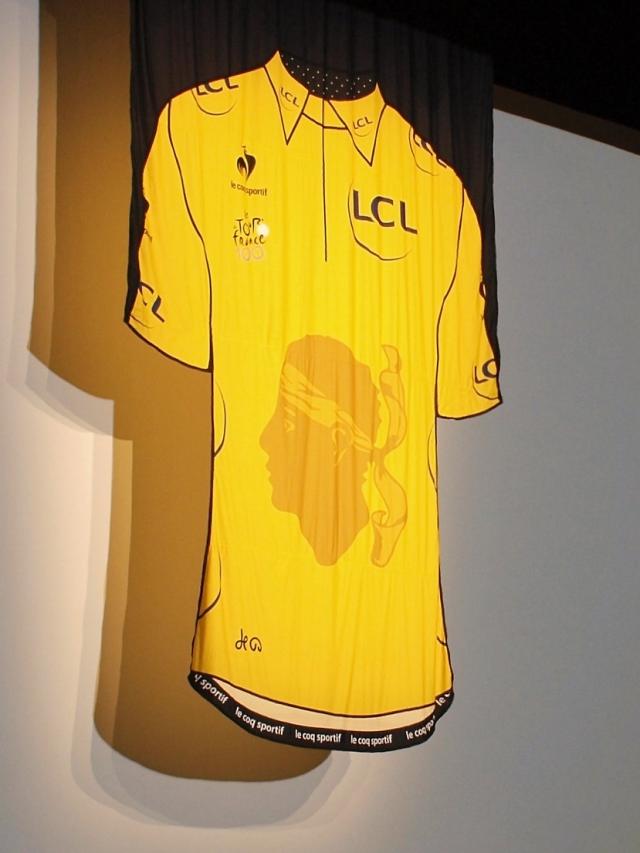 Earlier in the presentation, we'd got a preview of the maillot jaune that will be worn during the Corsica stages of the race, complete with the Moor's head that appears on the island's flag. Le Coq Sportif were back supplying the jersey this year, following the end of ASO's agreement with Nike - which last week terminated its personal sponsorship of Armstrong. 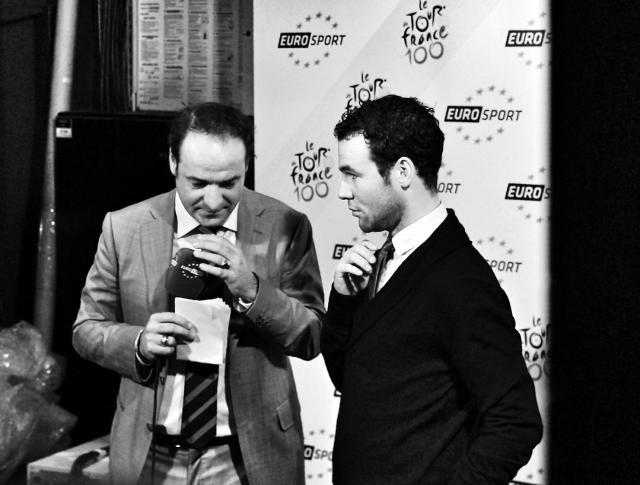 Mark Cavendish has worn the maglia rosa of the Giro d'Italia and the red jersey in the Vuelta, but despite 23 stage wins has never led the Tour de France. His own ambitions of defending the green jersey this year took a back seat as he helped Wiggins win the maillot jaune, the latter in the process becoming only the second British rider to get a full set of leader's jerseys at the three Grand Tours after David Millar.

With next year's race not starting with a prologue or a tough uphill finish but a flat stage instead that looks likely to end in a bunch sprint, he may never get a better chance - what's more, he will have the unqualified support of his new Omega Pharma-Quick Step team. Others will have their eyes on yellow too, but if it comes to a straight sprint and an in-form Cav is there in the finale, few would bet against him. Also sharing his thoughts on the route was Cadel Evans, twice runner-up before switching to BMC immediately after becoming world champion and last year becoming the first Australian to win the Tour. Since winning the rainbow jersey, he's managed to pull of the not insignificant feat of changing the perception of him from being seen as an argumentative wheelsucker to now being viewed as one of cycling' supreme battlers, who has fought hard for what he has achieved.

Evans perhaps has a couple of Tours left, and struggled in his defence this year, exhaustion leaving him more than a quarter of an hour down on Wiggins. He'll be back next year, although it may not be until the Tour is well under way until we discover whether it is Evans himself, or Tejay van Garderen, winner of the best young rider's jersey this year, who will carry BMC's GC hopes into the final week of the race.

By the time we'd evaded security and got backstage Alberto Contador had been and gone and likewise there was no sign of Andy Schleck, who had also remained in his seat as Wiggins, Contador and Evans, among others, took to the stage at the end of the route presentation.

With brother Frank absent - he is still going through the disciplinary process after testing positive for a banned diuretic on this year's race - Andy cut a solitary figure.

An hour or so after leaving the Palais des Congres, as I sat outside a nondescript tabac nearby and uploaded the day's pictures, I spotted Andy Schleck approaching on his own and spotting a friendly face through the window, he broke into a smile and went inside to exchange greetings.

Moments later, he was back outside, the smile gone. A Tour de France winner who never had the chance of standing on the podium on the final day to take the applause of the crowd, he melted into the crowd as he headed towards the Arc de Triomphe and beyond it, the Champs Elysees, alone in his thoughts.