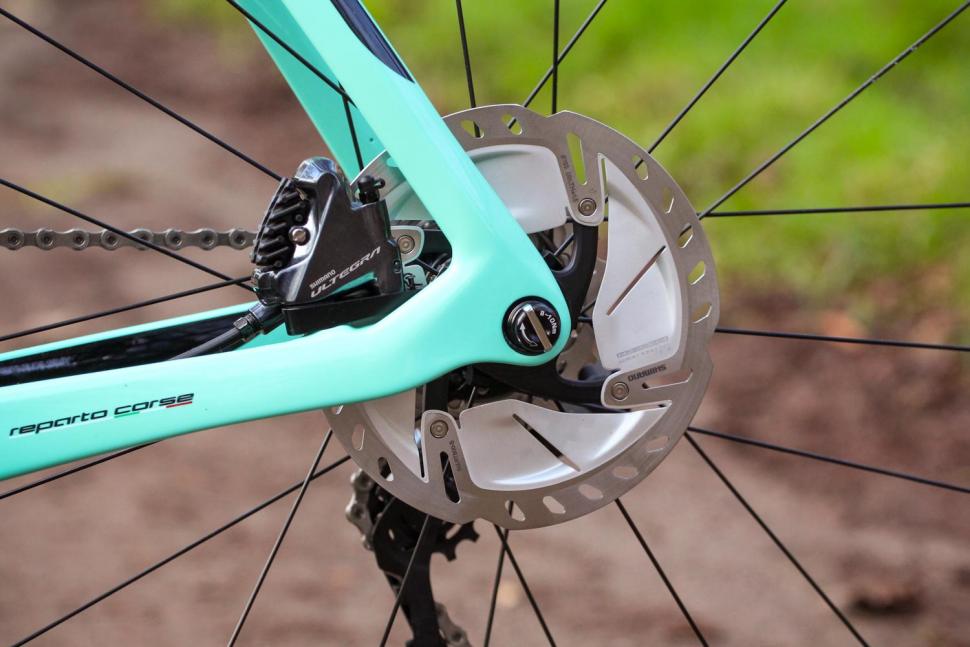 Should you make the switch or is it worth sticking with rim brakes?
by Mat Brett

Disc brakes have become an increasingly important part of the road bike world over the past few years, but while the benefits of disc brakes are well documented, they bring with them challenges and problems too.

Here are some of the issues that we've experienced and heard about.

The all-up weight of a disc brake bike is higher than that of a rim brake bike.

Levers, brake callipers, hoses, fluid and rotors weigh more than an equivalent rim brake setup. Manufacturers often try to minimise the difference but don't forget that disc brake hubs are heavier too, and disc brake wheels are often built up with more spokes of a wider gauge, although the lack of a brake track means that disc-specific rims are generally lighter. The thru axles that are used with many disc systems are heavier than quick release skewers. 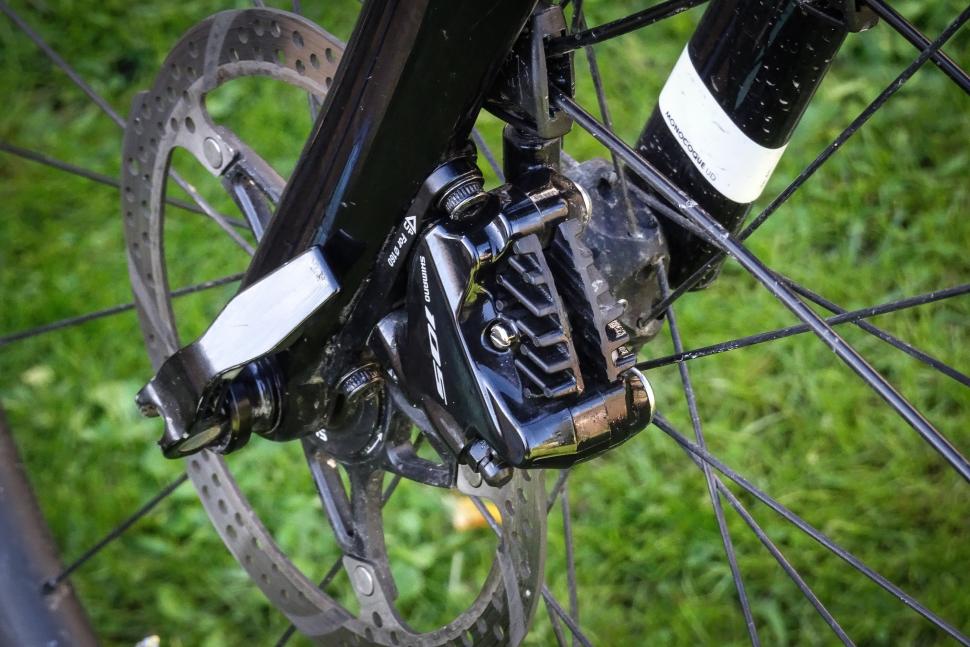 Read Everything You Need To Know About Disc Brakes

The weight difference isn't huge but it can often be around a pound over the whole bike when everything is taken into account.

2 Disc brake rub can be an issue

Early disc-equipped bikes borrowed the 74mm post mount standard from mountain bikes, where the brake calliper is simply bolted directly onto the frame or fork and adapters are used to accommodate different rotor sizes.

To try and improve the appearance of discs on road bikes, Shimano introduced its flat mount system. It’s an open standard that has been quickly adopted by other disc brake manufacturers. The vast majority of new disc brake road bikes are flat mount. 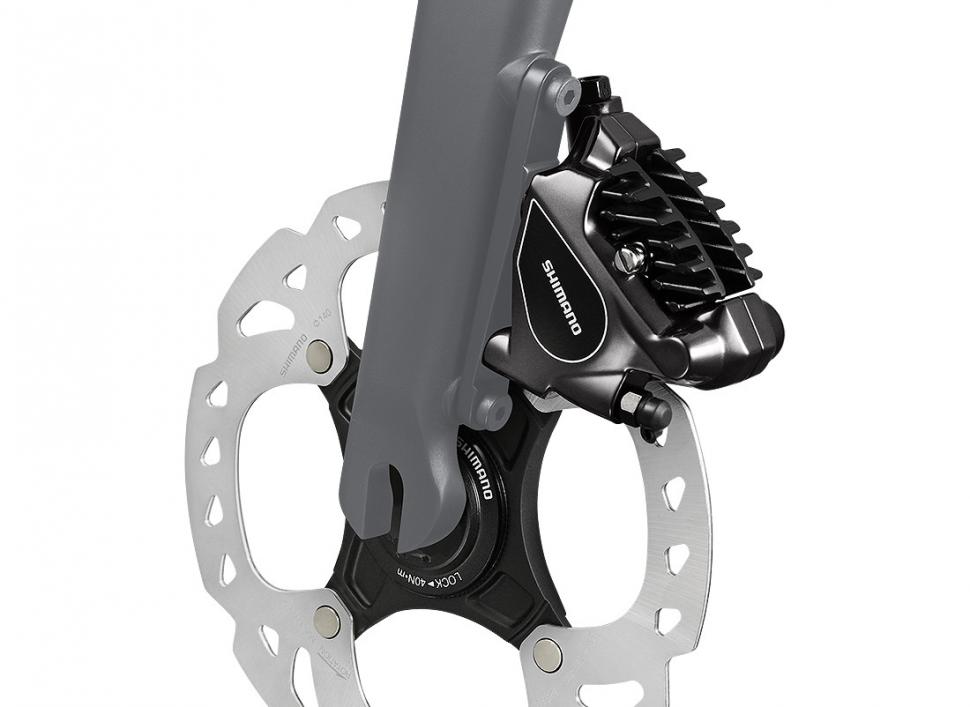 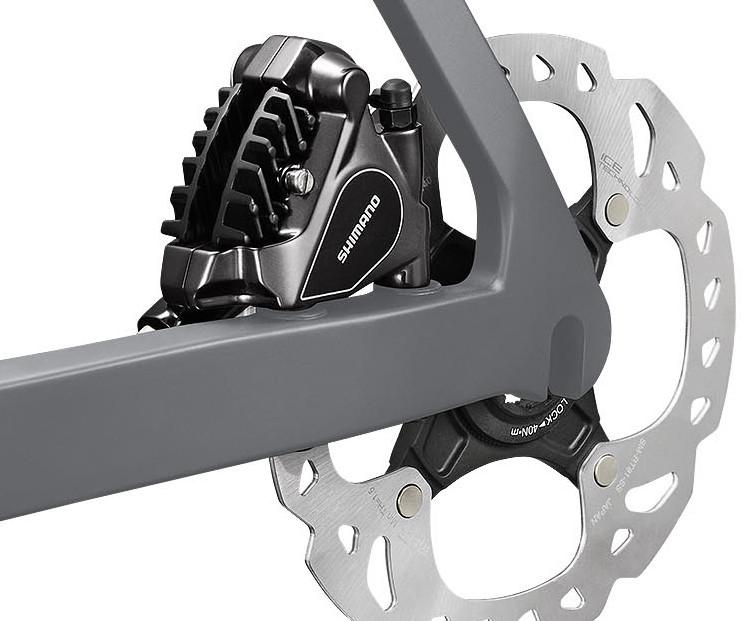 There’s no doubt flat mount disc callipers are smaller, better looking and lighter than the bulkier post mount callipers. The actual calliper mechanism is identical and there are no changes to the way the hose connects and the brake pads are installed. The key difference is in the way the calliper is mounted to the frame. 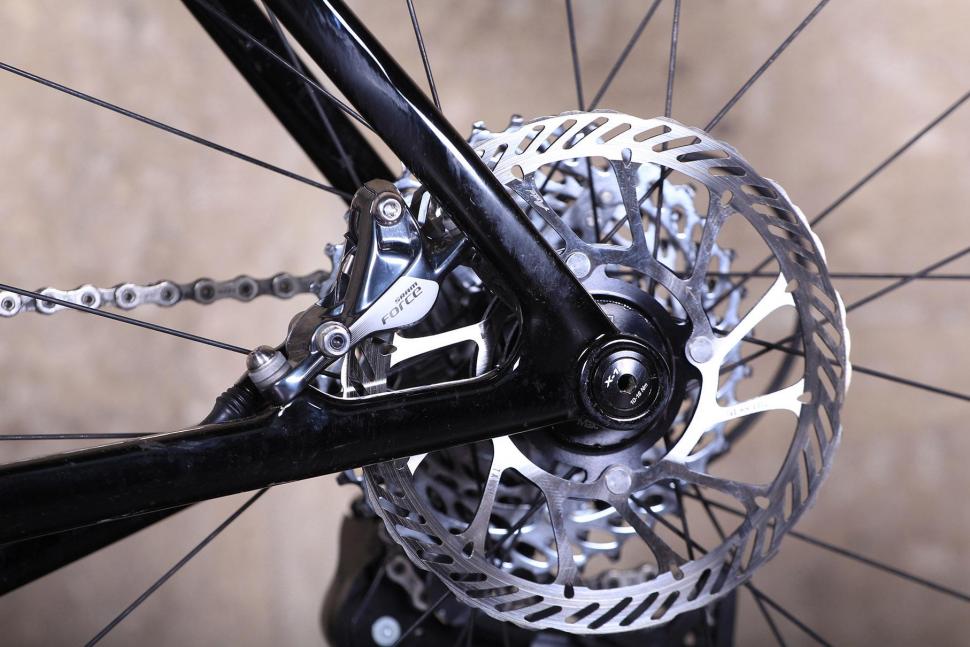 Depending on frame design and disc rotor size, post mount often needs a large and ugly adapter to provide the correct spacing over the rotor. On mountain bikes with many different frame designs and more rotor sizes in use, that versatility is a good thing, but the road market leans towards just 140mm and 160mm rotor sizes, for which flat mount has been designed.

We’ve had mostly good experiences with flat mount on the disc-equipped bikes we’ve tested, but there have been a couple of incidents of brake rub, and there's nothing more annoying. 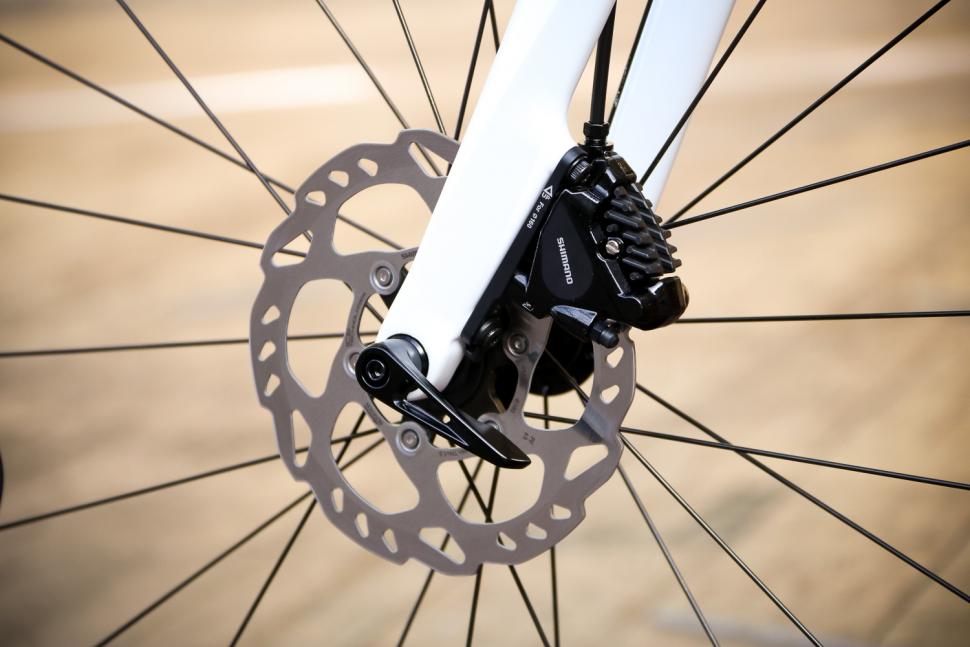 We asked Shimano about this problem and it told us that cleanly faced mounts are very important.

“As with post mount, a plane contact area (facing) always helps, as does the size of the disc (smaller is better). Centerlock rotors on good stable axle bearings (compared to 6-bolt rotors on lightweight hub axles) also help with alignment. The construction of the fork is also important (stiffness balance left/right),” said Shimano.

You'd hope a frame or fork manufacturer would make sure that the contact area was right, but in our experience this isn’t always the case.

Facing tools ensure the brake mounts on the frame and fork are smooth and level and provide perfect alignment. They're expensive and not really suitable for most home mechanics, although all good bike shops should be able to help you out here. Park Took does an adapter for its DT-5.2 Disc Brake Mount Facing Set and you can see it in action in this video.

The other solution to disc brake rub is to adjust the calliper on the frame/fork. With post mount it’s relatively easy: just slacken off the bolts, pull the brake lever and tighten the bolts to centre the calliper over the rotor.

“The range of adjustment for flat mount is the same as for post mount," says Shimano. "The difference is that the side-to-side adjustment is no longer on the calliper but in the slot hole instead. Shimano recommends that this hole is 4 x 5.2mm (+/- 0.1mm) but sometimes manufacturers don’t follow these recommendations. For the front calliper the adjustment is in the adaptor plate with the same hole dimensions.” 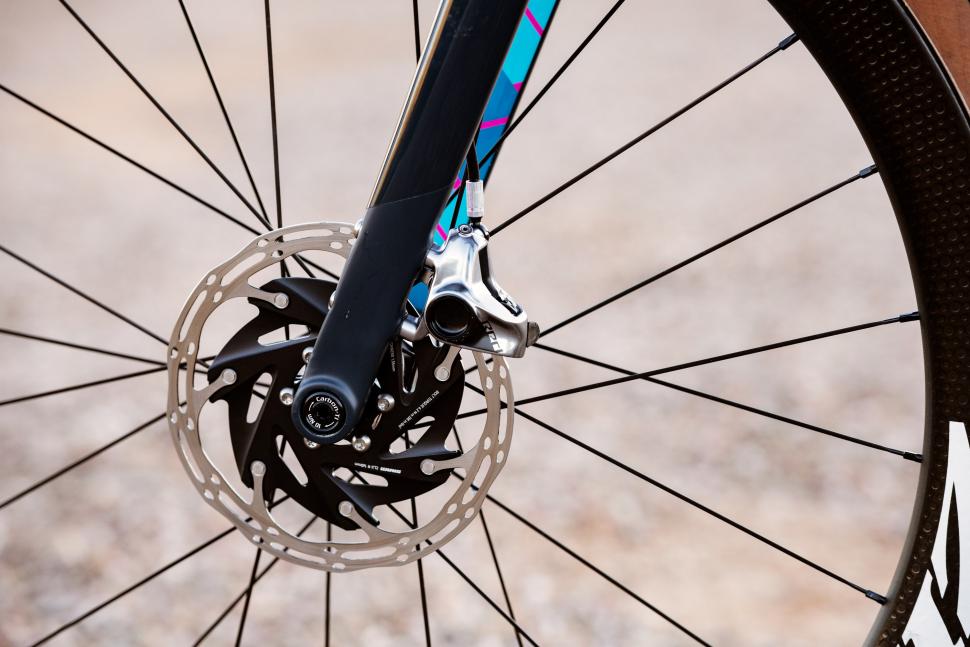 Not all manufacturers are adhering to the requirements as closely as they should. In many cases, the flat mount range of adjustment appears to be less than in post mount systems. We like flat mount but it does mean you are at the mercy of bike companies ensuring the mounts are manufactured correctly.

Like any other external component, disc brakes affect aerodynamics. Some manufacturers have stated that the rim brake version of a particular bike is more aerodynamically efficient than the disc brake model, but it's not as simple as saying that rim brakes are always more aero. 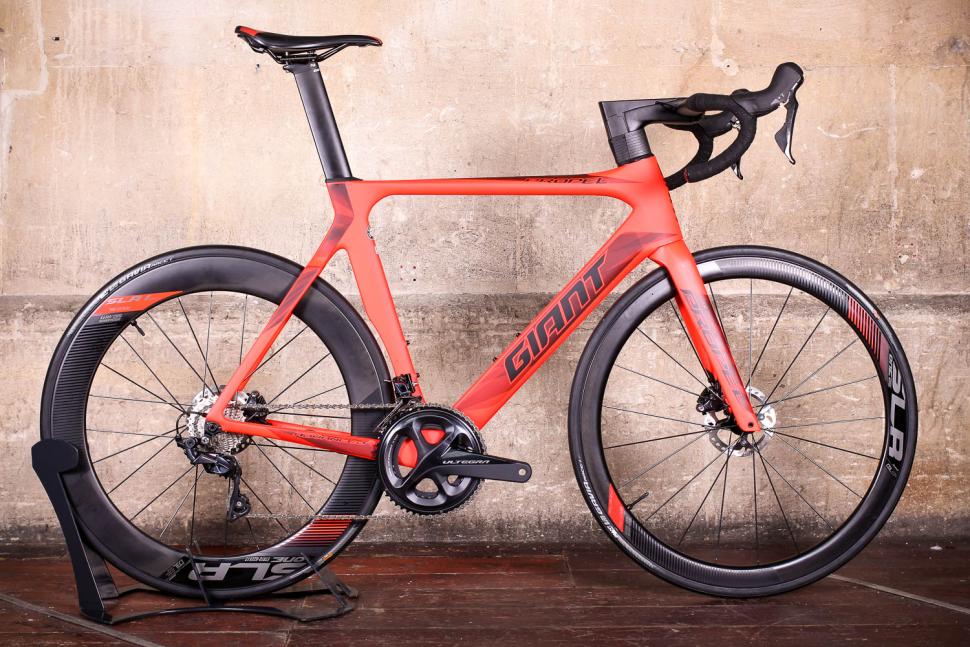 When Giant revealed its Propel Disc in 2017, for example, it said, "Engineers found that, with proper integration, a disc-brake design can actually improve aero performance compared to rim-brake configurations.

“This is because the location of traditional callipers (either in front or behind the fork crown/ legs) creates 'dirty' air'. Opening up the fork crown area (by placing the disc-brake callipers down at the hub) means that the air hitting the new disc-brake calliper has already been disrupted by the leading edge of the tyre/wheel. This effect is further enhanced by an asymmetric fork that helps smooth out airflow over the calliper.” 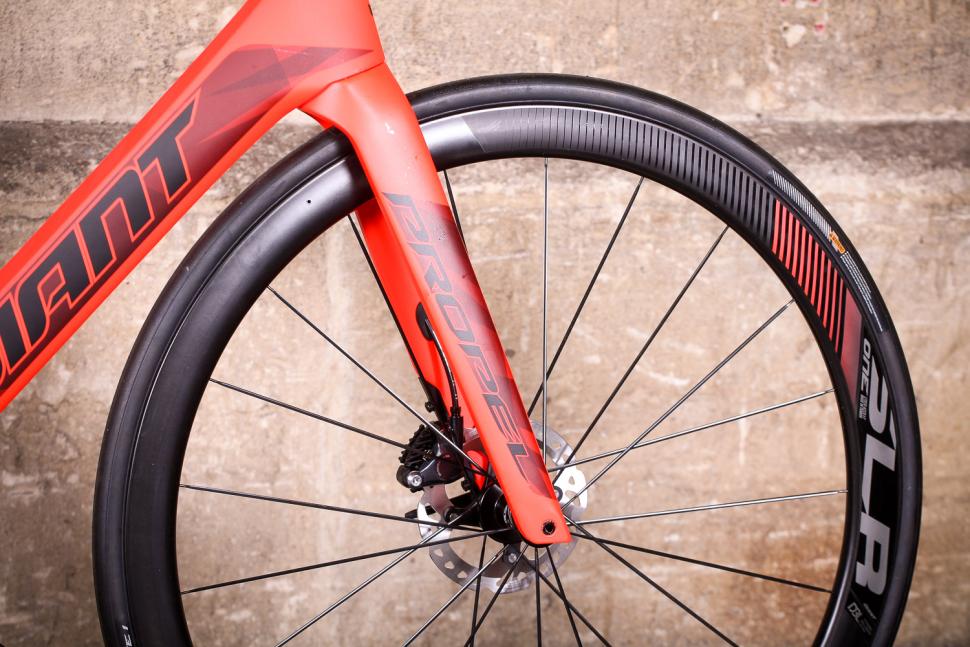 A handful of new aero road bikes, like the Cannondale SystemSix and 2019 Specialized Venge, are disc brake-only.

4 Choosing pads is a minefield

Switch to a disc brake bike and you'll eventually have to choose new pads... and that's a minefield. 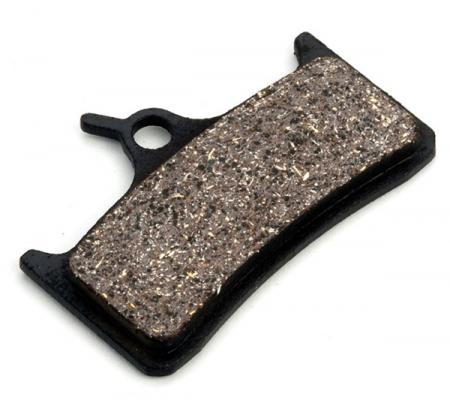 All pads are made by mixing various powdered additives with a binding agent and then squashing it all together at high heat and pressure to form a solid block on the backing pad. What's in the mix of powders has a major effect on the pad's properties.

Most new bikes come fitted with resin pads. They're made from non-metallic additives such as rubber, glass, carbon and Kevlar to provide an all-around pad that works for most people but isn't very durable under hard use. 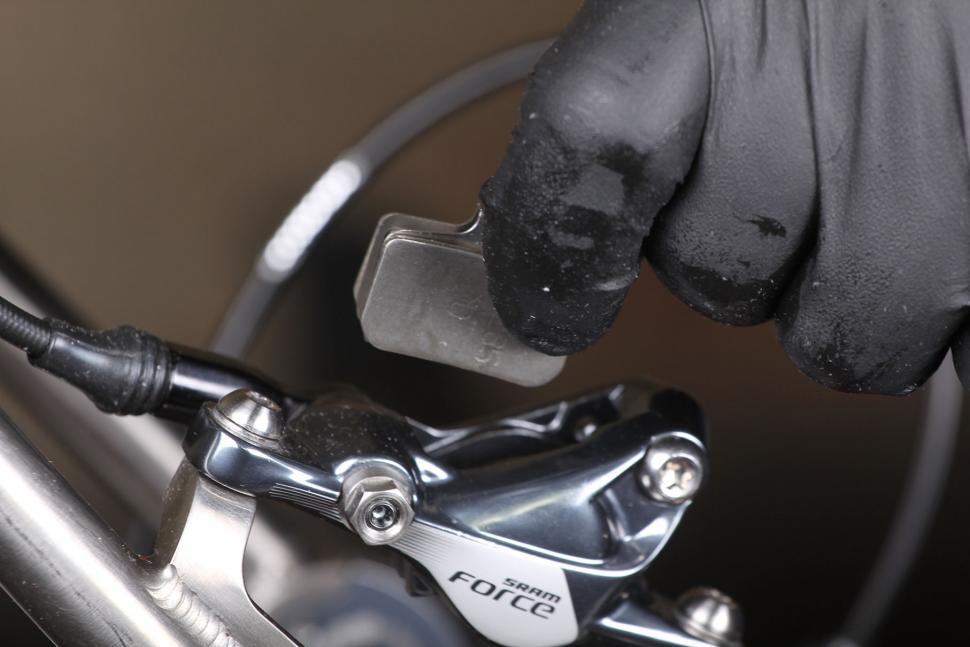 If you live anywhere hilly and/or ride in all weathers then you're probably better off switching to more expensive but much longer lasting sintered pads. Also known as metallic brake pads, these use a very high proportion of metallic fillers such as copper, steel and iron. They provide strong, effective braking at high pad temperatures although their bite can be poor when they're cold and they'll wear out your rotors quicker than resin pads.

5 You need to bed in new brakes

New disc brake pads and rotors don't immediately perform to their full potential – they need bedding in first. This is a process that distributes pad material over the rotor to increase the friction, and maximises the contact area between the two surfaces.

This will improve the performance of your brakes massively and prepare them for normal riding.

Chances are that you know how to adjust rim brakes and swap the pads, and probably how to change the cables too. You might have been doing it since you were a kid. Depending on your cycling background, disc brake maintenance might be entirely new to you. 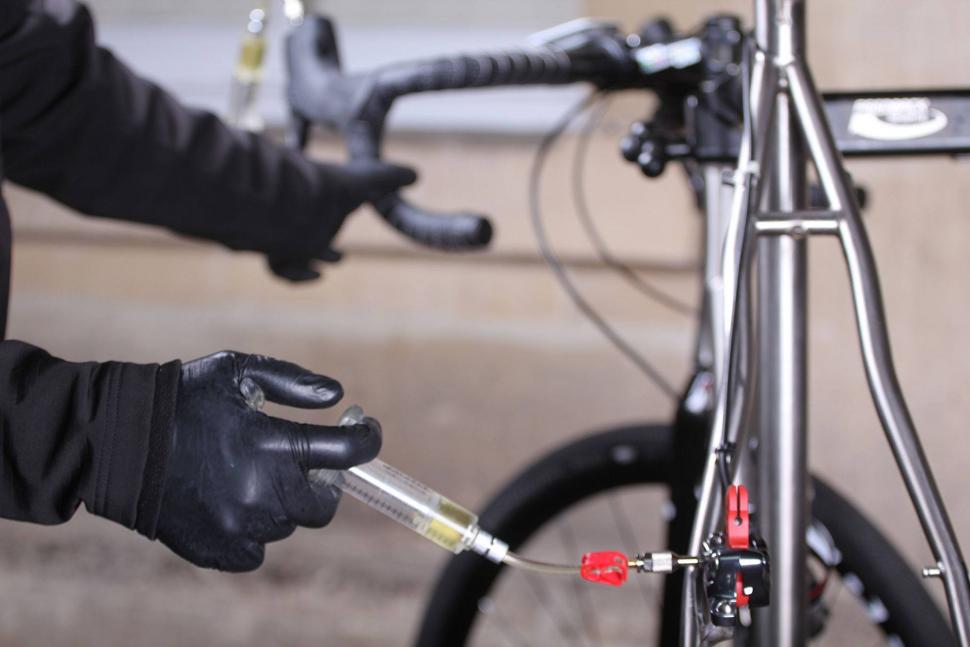 One issue you could encounter with hydraulic disc brakes is a soft and mushy feel because of air in the system. This requires bleeding and means either a trip to a bike shop or shelling out on a bleed kit. Each manufacturer has its own bleed kit. Shimano and SRAM, for example, use different techniques and fluid.

Bleeding a hydraulic disc brake system isn't the most onerous of tasks but you will need to get the hang of it while following a guide or watching one of our videos.

It's true that rim brakes can squeal but we reckon that disc brakes are worse offenders.

The most common cause of disc brakes squealing is contamination of the rotor or pads. You have to be careful when using spray lubricants on a bicycle with disc brakes, or avoid them altogether.

Find out how to stop your brakes squealing

“Cleaning your rotors regularly with a specific (oil-free) disc brake degreaser is a good way to avoid squealing brakes," says Shimano. "Cleaning your pads too can help quieten things down — you can try some sandpaper or grinding the pads — but if the grease has soaked through the pad, you might need to replace them. Don't use a degreaser or chemicals on brake pads, though.”

It’s harder to clean disc brake pads than rim brake pads, largely because you have to remove them from the bike in the first place.

Squealing pads can also be a sign that the pads are worn out. It's a little more tricky to take a close look at disc brake pads than it is with rim brake pads, although taking the wheel out can make the task easier.

One of the advantages of disc brakes is that they don't wear out the rims of your posh carbon wheels, but don't forget that you will wear out the disc rotors. Thankfully, rotors aren't particularly expensive. 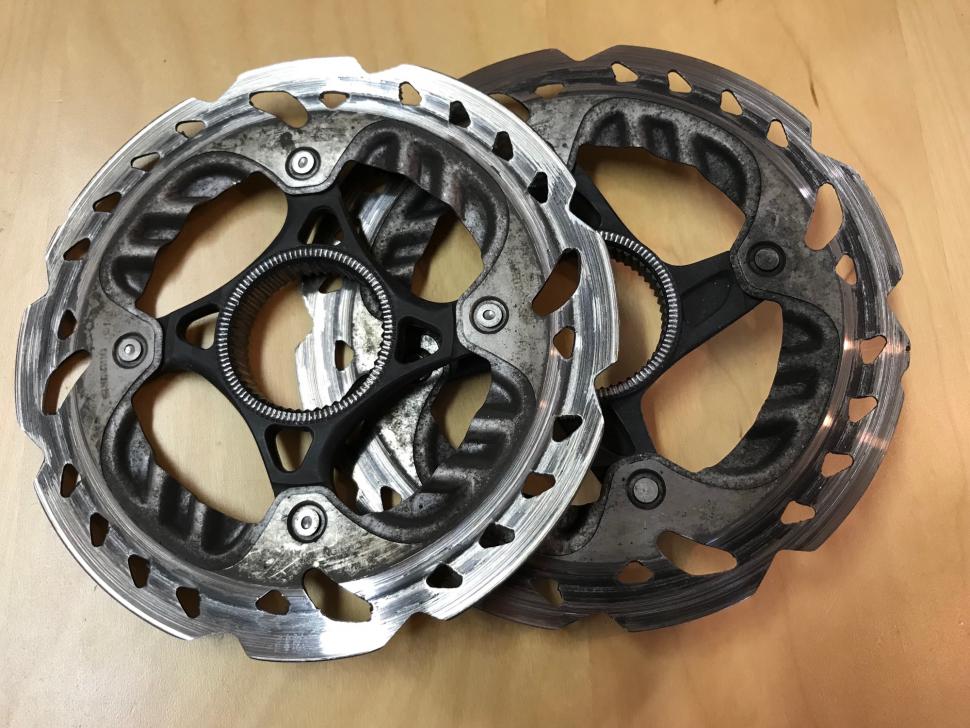 Different brands give different minimum thicknesses for their rotors (the figure is often printed on the rotors). Go beyond that limit and things become dangerous, so keep an eye on 'em.