Subscribe
Back to Features
feature
Tech
Are expensive carbon road bike wheels worth the money?

Are expensive carbon road bike wheels worth the money?

Does more expensive necessarily mean faster? We real-world test eight wheelsets to find out whether money can buy speed...
by Jamie Williams

Carbon road bike wheels can vary hugely in price... but does more expensive necessarily mean faster? We've all seen the wind-tunnel data, but just what does that mean in the real world? We put eight popular carbon wheelsets ranging from under £600 to nearly £3,400 through their paces to find out. 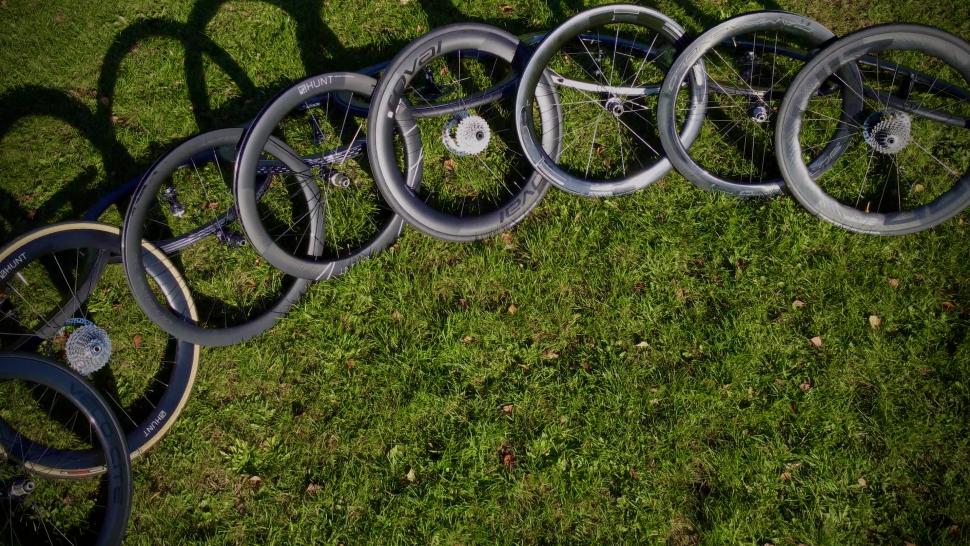 To try and get as clearer picture as possible we've selected popular wheelsets, including some of the best road bike wheels out there to suit a whole host of price points. All the wheels tested are between 50mm and 60mm deep, and the disc-brake-specific versions. You can find more information on the wheels using the links to the manufacturer's websites below:

A disclaimer: Whilst every effort was made to make this a fair test, we realise that as with any real-world testing, it is not possible to control all the variables; therefore we accept that our results are not going to be in any way definitive. We're certainly not saying our best-performing wheelset is the out-and-out fastest in all conditions, but hopefully you'll find the test entertaining and the results an interesting extra bit of information to bear in mind when shopping for your next set of race wheels.

Now, obviously, to make this as fair as possible there's going to need to be some serious ground rules. Both me and Liam will ride each of the wheelsets once so that each wheelset has two runs...first up though, the route. 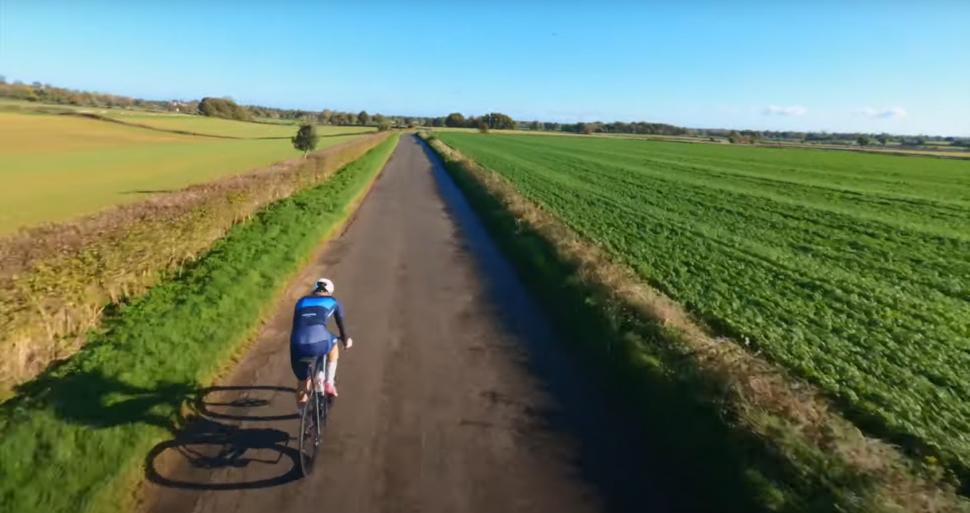 The route selected is a fast but rolling course in the Cotswolds that's around 6km long. It was chosen for its lack of traffic, junctions and sharp corners or descents that could prevent Liam or me from riding at constant power.

On the subject of power, I held 300 watts for the eight tests to represent what you might find averaged in a road race, while Liam held 200 watts to represent what the average consumer might expect to ride on a typical solo ride. Power was measured using a calibrated power meter on each bike that has been long-term tested to ensure repeatable results. 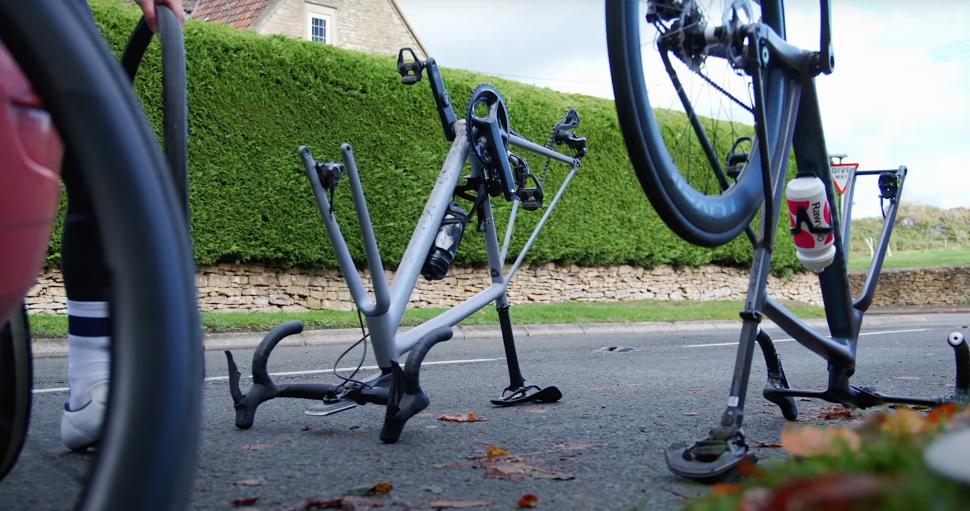 As we want to eliminate as many external variables as possible we kept the tyres, tubes, cassette and disc rotors the same for each run. This should mean that rolling resistance stayed constant as the tyres were run at the same air pressure as well, as measured by a digital gauge.

As some brands' wheels are 'optimised' for wider tyres while others are not, we varied the width of tyres and tyre type between me and Liam, but each of us stayed using the same set-up for each test. That meant that for the eight runs, Liam used 28mm tyres set up tubeless while I used 26mm tyres set up with butyl inner tubes and valve extenders (we spent countless hours setting up wheelsets!) 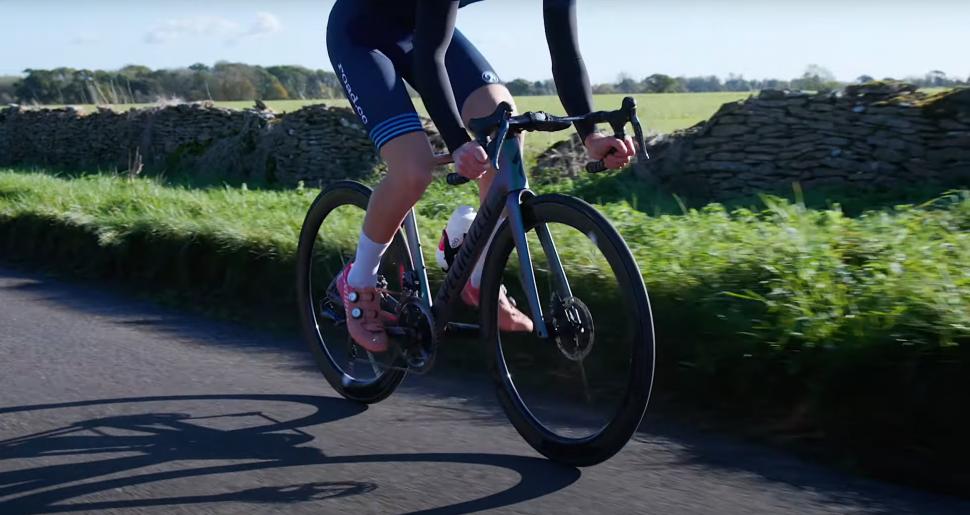 A further consideration was the day of the testing, which was chosen as it was still, dry and remained a consistent temperature throughout. We're unsure how much of an effect air density and pressure would have on the results, but certainly didn't want to find out! Both my Wahoo and Liam's Garmin head units measured a maximum difference in temperature of two degrees between the tests.

The subject of many a debate when deciding how best to conduct these tests was rider position, as this can make a huge difference to the drag coefficient of rider and bike. It was decided that while, yes, it is physically impossible to completely eliminate this, it could be managed by wearing the same kit for all tests and making every concerted effort to hold the same position.

As you can see above, I opted for a position on the drops with slightly bent elbows. This is not my usual riding position, but the one that I felt was most repeatable and that I could hold consistently throughout testing. 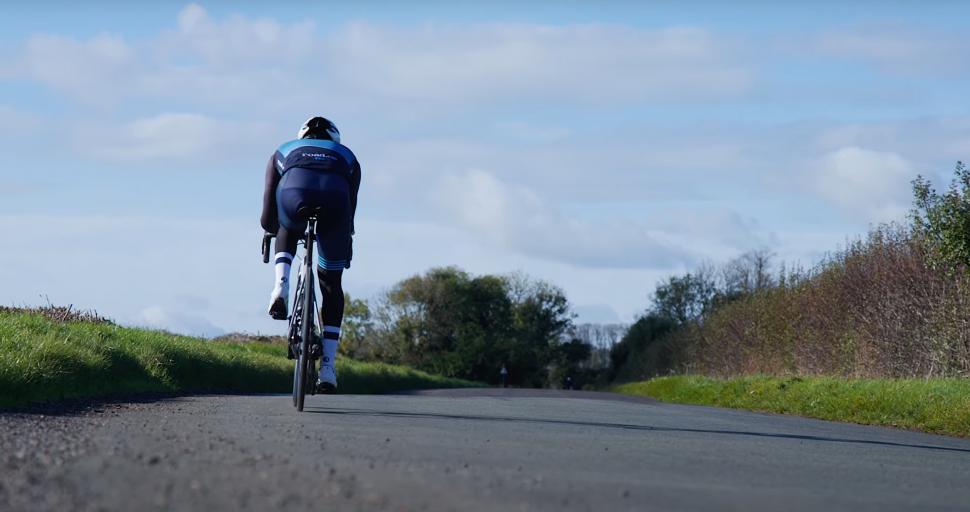 Myself and Liam managed to average within +/-1w on each of the tests, and given the similarities and trends between both mine and Liam's results we are confident in the reliability of our findings.

As we said in the video, if any brands would like to question our data then we would love to independently verify their own testing. If we don't get such sore thumbs from changing tyres then that's an added bonus! 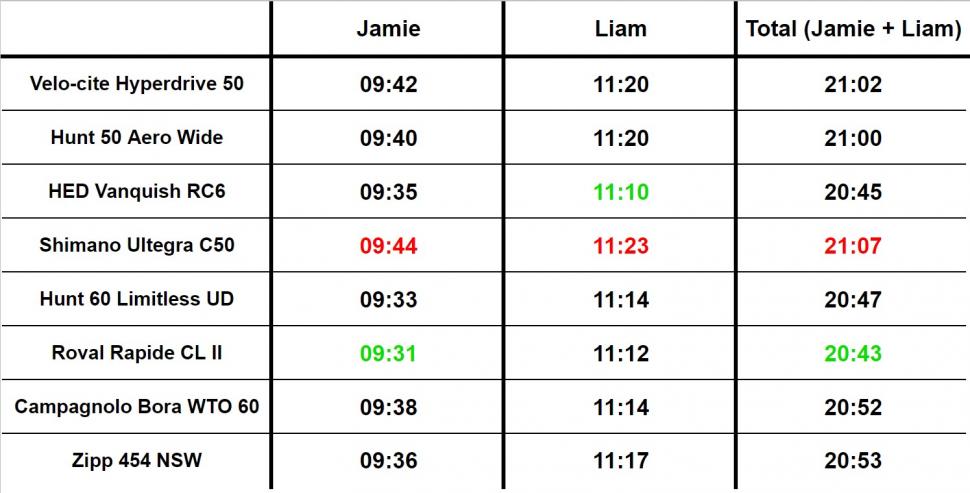 Of all the wheelsets tested, we can see that the Roval Rapide CL II wheels were the fastest on the day, closely followed by the HED Vanquish RC6 and Hunt Limitless UD Carbon Spoke wheels.

It is worth noting that although not insignificant, the gaps between all of the wheels are small, just 24 seconds in fact between the fastest and slowest wheelset on mine and Liam's combined time of just over 20 minutes. That's less than a 1.9% difference, so sadly training is going to make a far bigger difference to your speed than which wheelset you choose. 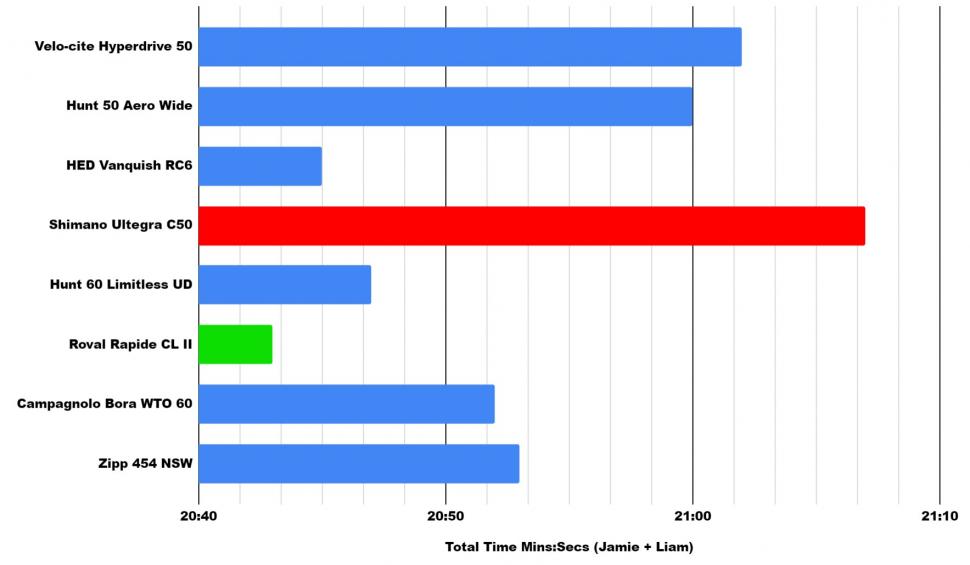 The wheels are arranged in the above bar chart in ascending order of price, and as you can see the most expensive wheels were not necessarily the 'fastest' in our test; in fact, it's hard to draw any meaningful correlations between price and speed.

A strong showing from the cheapest wheelset on test, they impressed us with their ride quality and look good too. You can also currently get them with free shipping using the code “Blackfriday shipping”. (a full review is coming soon)

Again, a strong showing from some of the cheaper wheels on test. Don't forget that these have a Giro D'Italia victory to their name! World Tour performance for less than £800 is never a bad thing. 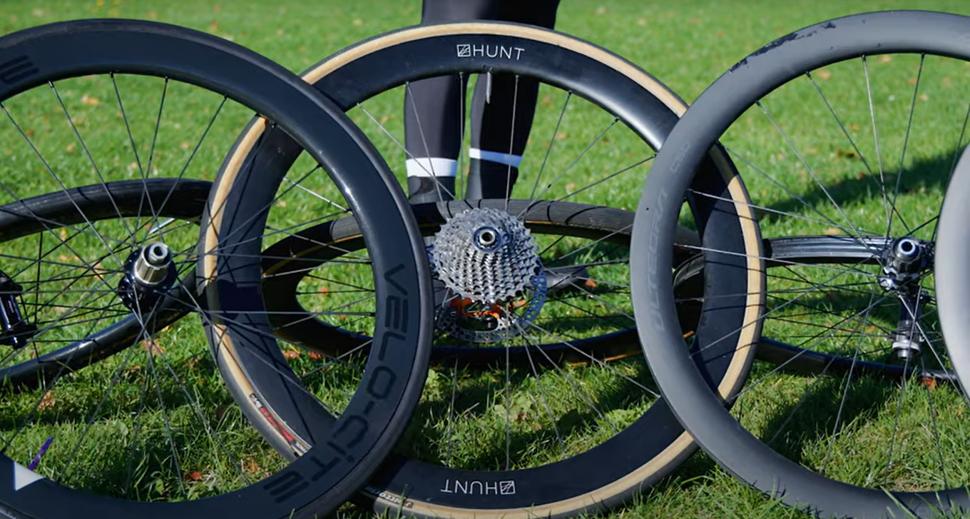 One of the fastest in the test, in fact, THE fastest for Liam. They're stable but these are also the heaviest of the options here. HED have long been experts in aerodynamics and our test shows that this is not without merit (check back for a full review soon).

The surprise result. We weren't expecting these to be 'slowest', but double and triple-checked that there was no disc rub and then went and all but mirrored the result with Liam. These do have an almost silent freehub, which could be a factor as more grease will lead to them being quieter and more durable but slower (we're reviewing these wheels soon too). 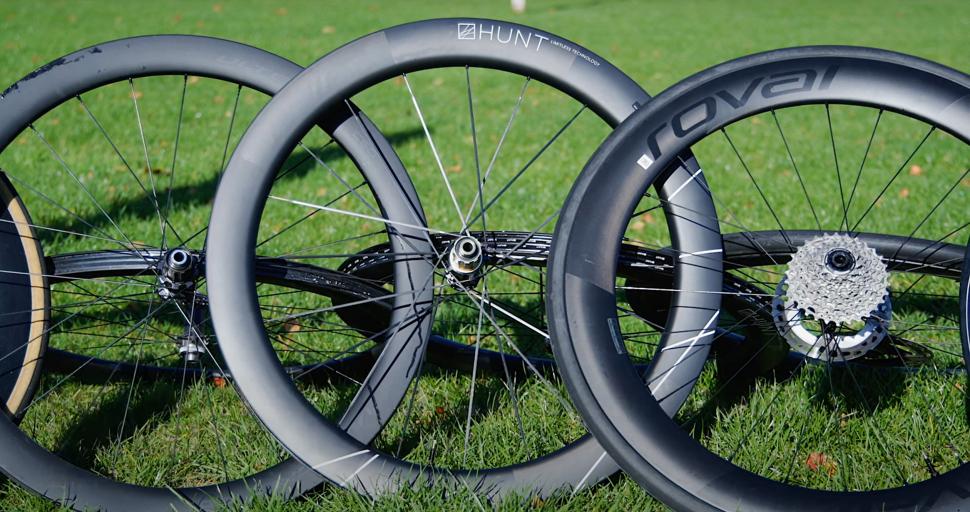 Some of the quickest here, they also sound great and accelerate well (in between the testing). A very noisy freehub though, so bear that in mind...

I've long thought that the CLX version of these are the fastest wheels I've tested; wind tunnel data backs that up and now so does our real-world testing. The CL version gets the same rims but DT Swiss 350 hubs. We weren't too keen on the exposed rim hooks when using a 26mm tyre, so would personally go for 28mm tyres plus on these super wide wheels (full review coming soon). 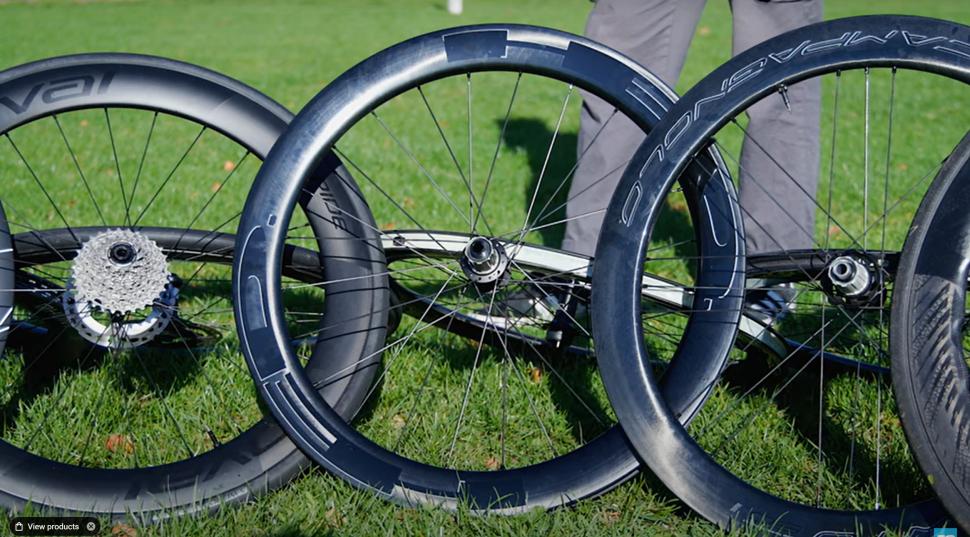 Very pretty and they sound exceptional with a low 'whoosh'... and they aren't at all slow either. I wasn't a fan of the external brake rotor lock rings, but you can't have it all! Read the full review here.

By far the most expensive wheels tested, these are also the only hookless ones which will limit tyre choice. The wavy rims are said to shed vortices for more stability in crosswinds, and these are also the lightest although in our testing, not the outright fastest. Read the full review here. 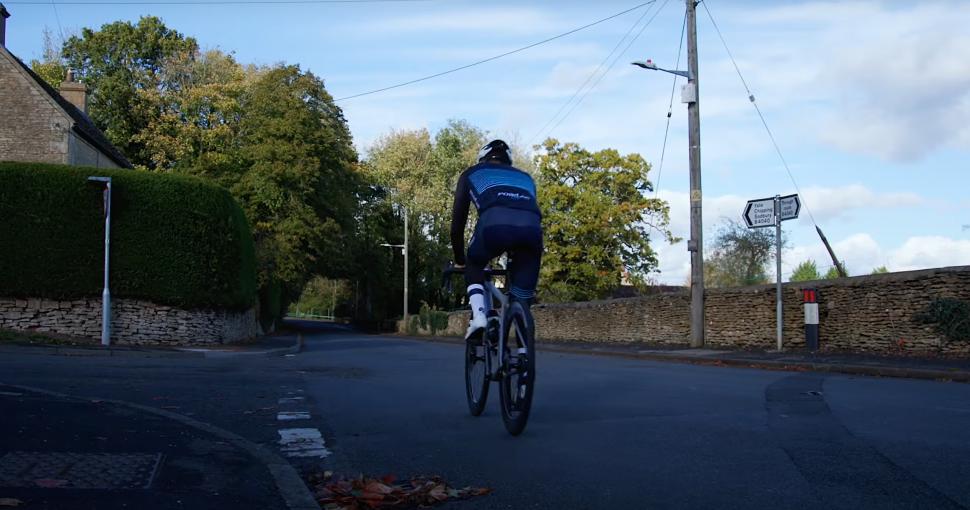 Firstly, we were both very impressed with how easy the tubeless set-up was on all of the wheelsets tested. This has long been a bug-bear of even the most avid tubeless supporters. We're often told that tubeless standards are improving, and our experience shows that to be the case. Throughout the day no tubeless inflators or flash chamber pumps were used, only a high-volume floor pump.

If you're looking for a new wheelset, then don't immediately assume that more expensive means better. How fast you go will come down far more to YOUR position on the bike and how strong your engine is! 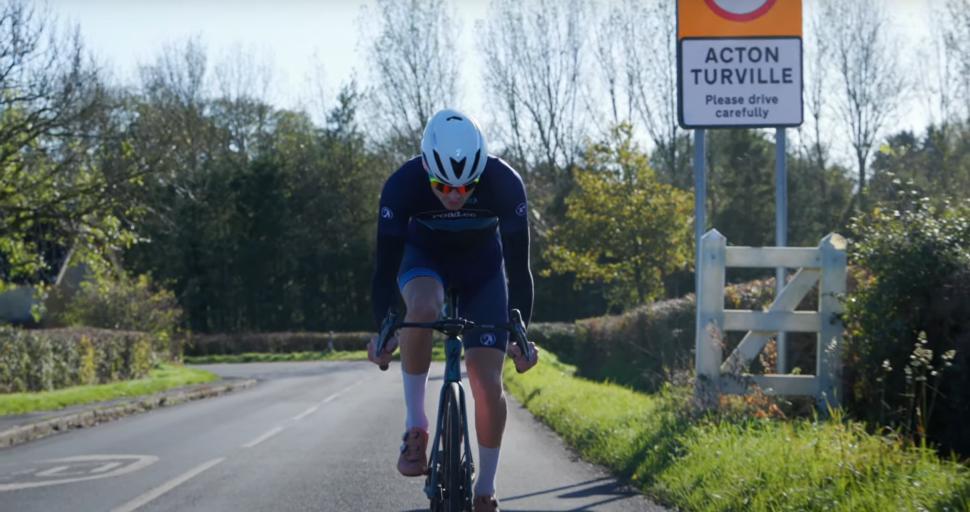 Which wheelsets would we buy?

Liam says: "Following this testing I just can't see myself spending over £1,000 on a set of carbon deep wheels.

"The cheaper options such as the Velo-cite's and cheaper Hunts give you all of the looks and nearly all the speed. Remember that the difference is going to be even smaller when in a bunch.

"That said if money was no object then I'd be very tempted by the Campagnolos. They look wicked, sound excellent and that spoke lacing pattern...just wow!"

Jamie says: "If you're looking for the fastest wheelset out there like me, for the placebo effect more than anything, then it looks like you're going to want to buy at around the £1,500 price point.

"The HEDs were very impressive and we both loved riding them, but they are quite weighty; although this only really becomes a factor on slow, steep and prolonged climbs, which we don't have many of in this country.

"My top picks would be Roval or the more expensive Hunts. They were fastest in our testing, and the super wide profile means they offer impressive stability for a multitude of conditions."

Which of the wheelsets would you choose? And which wheels would you like to see us test in the future? Let us know in the comments section below...