Going fast has never looked so good. Here are four of the best go-faster aero race bikes at the 2022 Tour de France
by Liam Cahill

The Tour de France is a great place to see the fastest road bikes being ridden by the best riders in the world. But which are the best of the best? Here are our top picks. 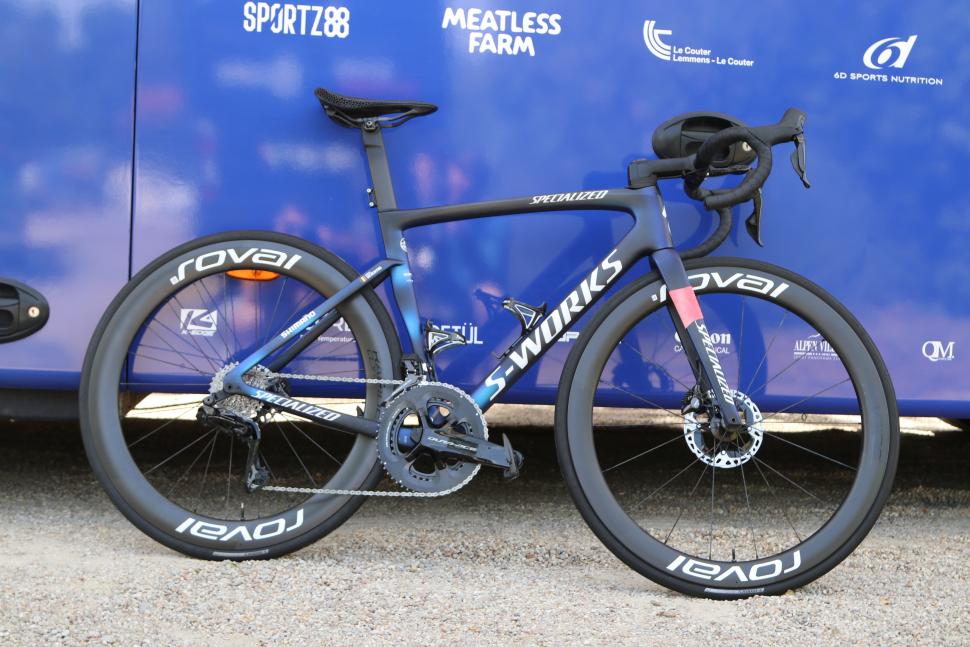 Now, you’re just going to have to trust us when we say that we came up with this list before the race had started in Copenhagen. Our first pick was always going to be the Specialized Tarmac SL7 because the fastest rider in the race is undoubtedly Fabio Jakobsen. 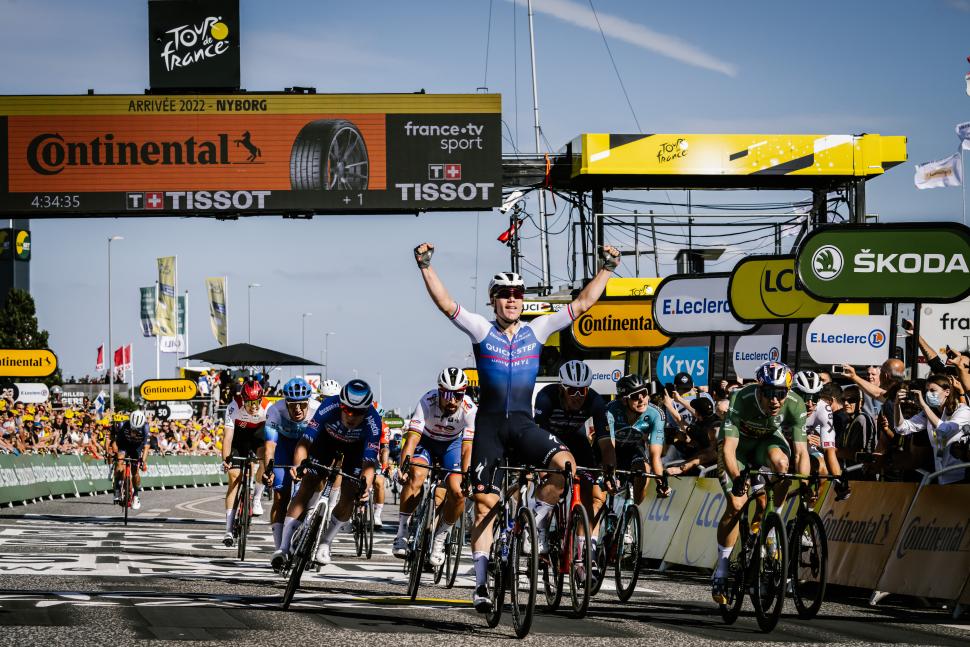 His acceleration in the final 50m of the opening road stage was devastating. You just shouldn’t be able to win sprints from that position, but the Dutchman did and it crowned a difficult return to the top of bike racing for the rider that the world nearly lost to a terrible crash in Poland. 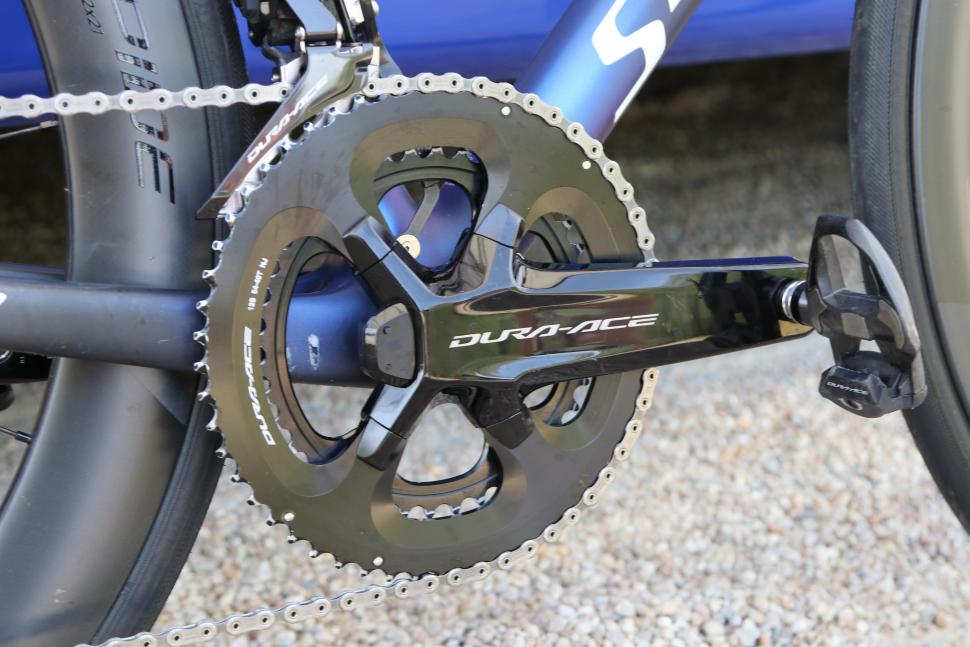 For the fast sprints of the opening stages, riders have commonly opted for massive chainrings in previous editions of the Tour de France. As far as we know, Shimano officially doesn’t yet have anything bigger than the standard 54T chainring for its new Dura-Ace 12-speed groupset, but we’ve seen Astana riders using 11-speed chainrings with the new 12-speed stuff so that seems to be an option if riders want to go bigger.

That said, the opening two sprints haven’t been overly fast, so the standard 54T chainring will likely have been big enough. 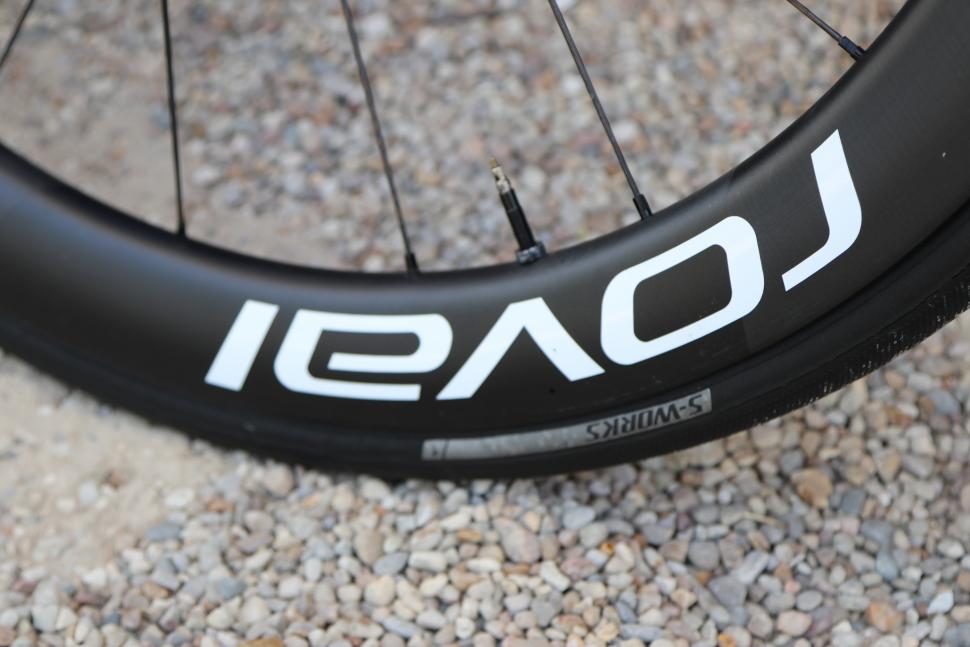 Mounted onto Jakobsen’s Roval Rapide CLX II tubeless-ready wheels is a set of mystery S-Works tyres. We first spotted these in the opening races of the year, so it won’t be long before this new tubeless tyre from Specialized is official.

If you’ve got a spare £13,200, you can go out and buy exactly the same bike as Jakobsen. But you can’t buy his explosive kick or his fearless sprinter’s brain. 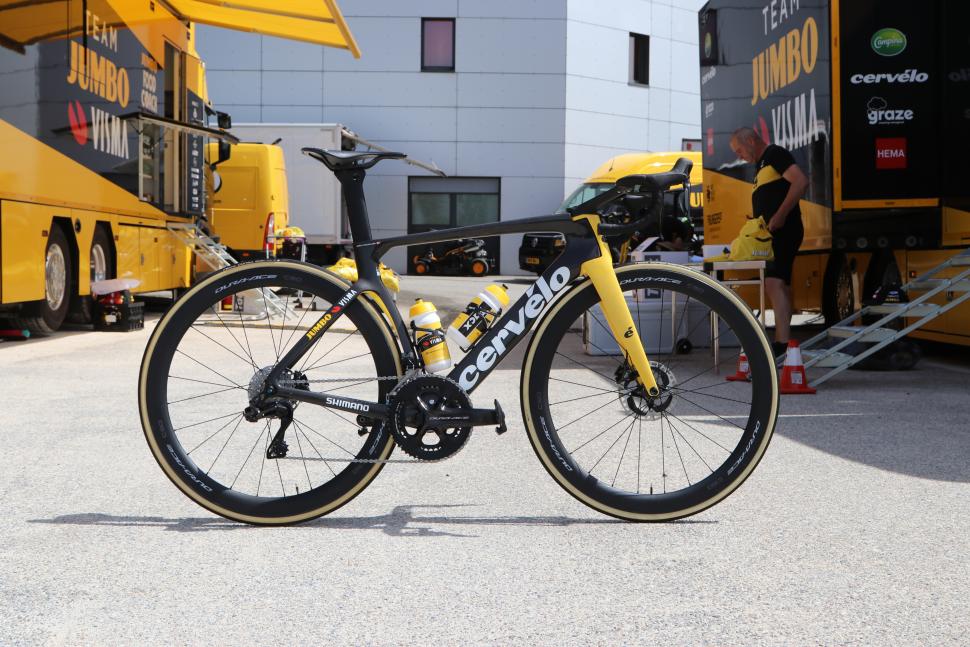 The Cervelo S5 underwent a redesign at some point during the winter with the Canadian brand seemingly keen to take advantage of the UCI’s relaxation of the frame design rules. A lot of the tubes have become deeper, but if you want a more in-depth look at the new frame, check out Mat’s article from before the Tour got underway. 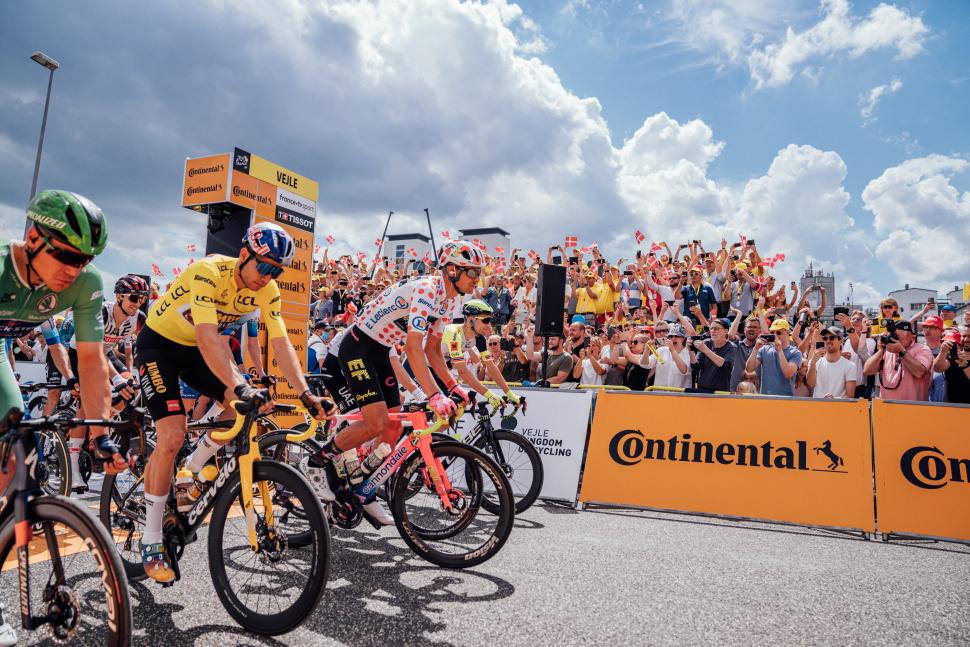 Van Aert has been counting the seconds so far in the race and we’re not talking about time. The Belgian superstar has netted 3 2nd place stage finishes, which is a slightly unfortunate record that no one has achieved since the 1930s.

His bike features a few interesting component choices, most notably the tyres, which are the Vittoria Corsa Speed tubeless model rather than the standard G2.0 road race tyre. The Corsa Speed is generally reserved for time trials as it is quite delicate and not the best in the wet. 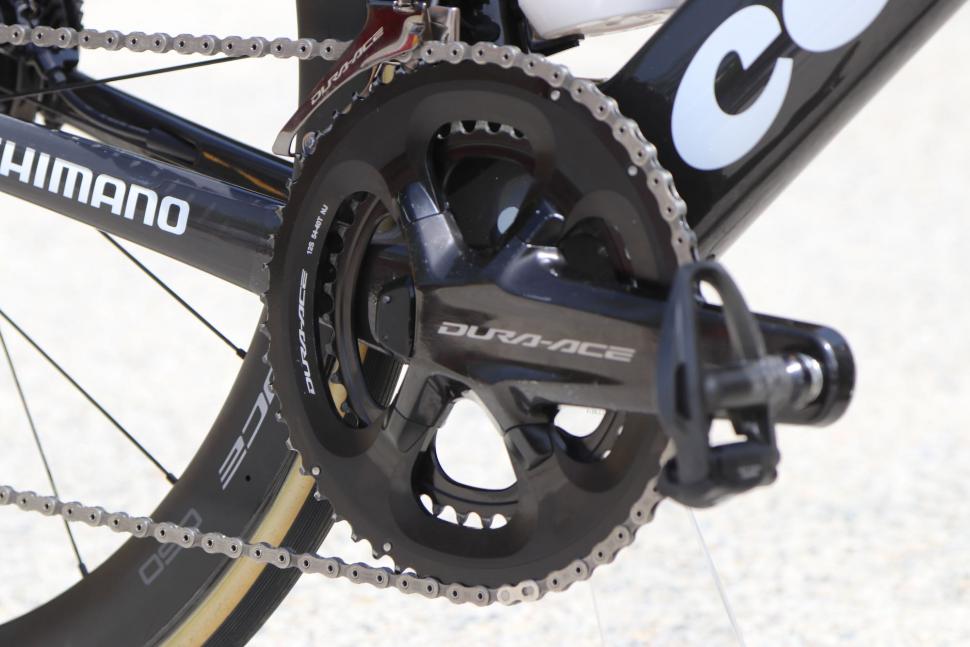 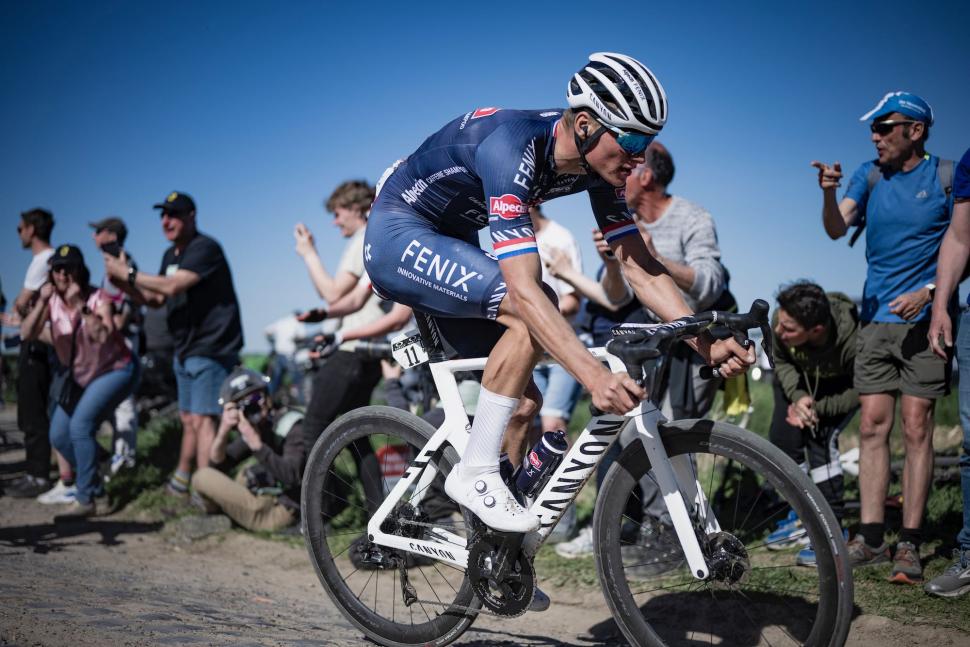 Under the likes of Mathieu van der Poel, any bike is going to be pretty speedy, but the Canyon Aeroad will likely net a fair few stage wins and possibly even some time in the Yellow Jersey.

The Aeroad is being used by 3 teams in this year’s race with Alpecin-Deceuninck, Movistar and Arekea-Samsic all racing on the aero machine. 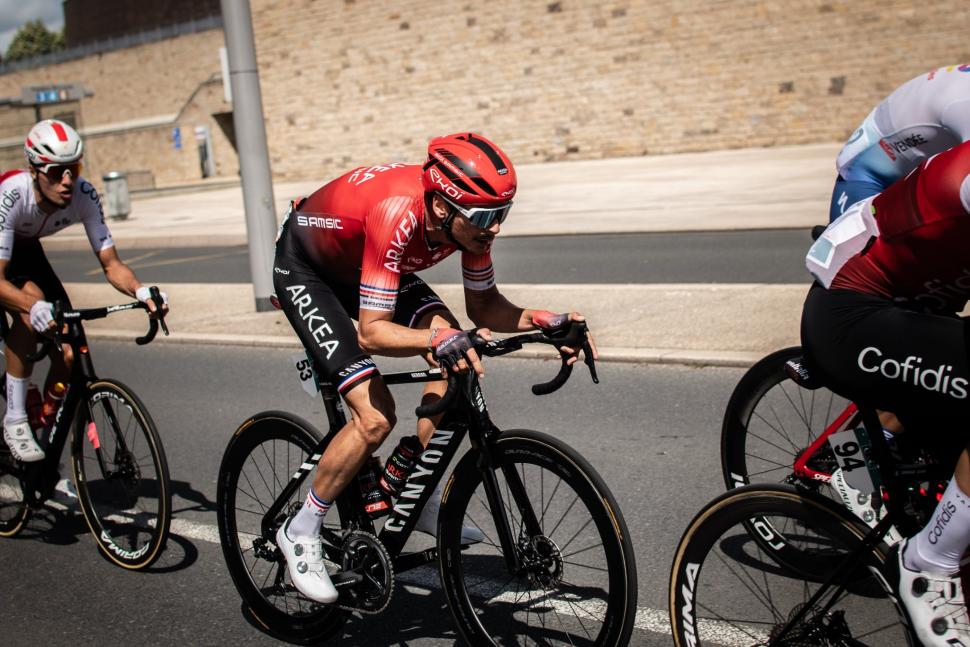 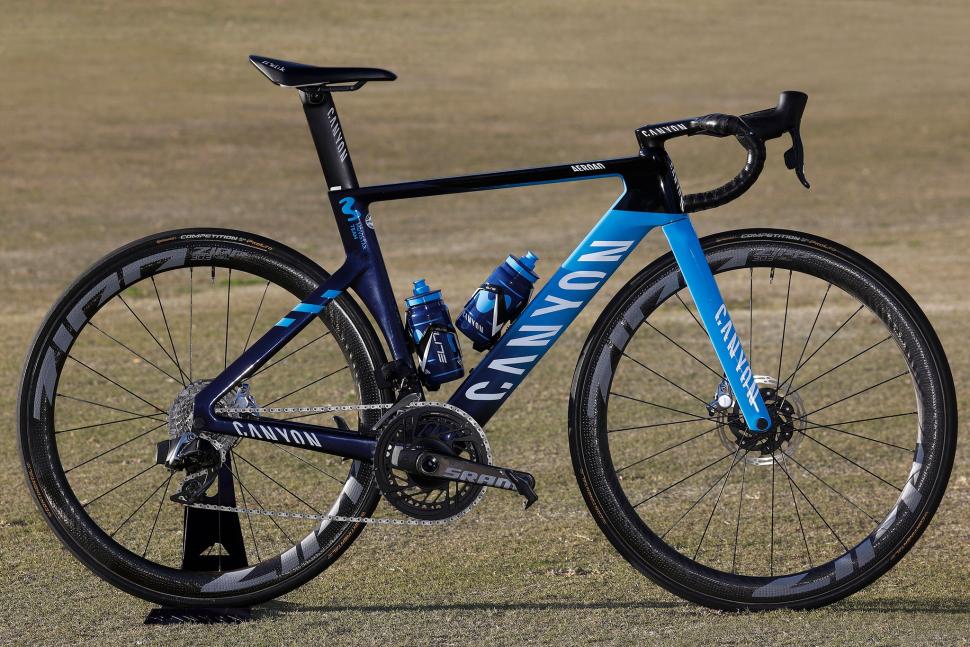 Movistar, meanwhile, are sponsored by SRAM and so they get the Red eTap AXS groupset and Zipp wheels.

Oh, and those teams are ones to keep an eye on as we expect to see a new Canyon Ultimate appear when the race heads into the mountains. 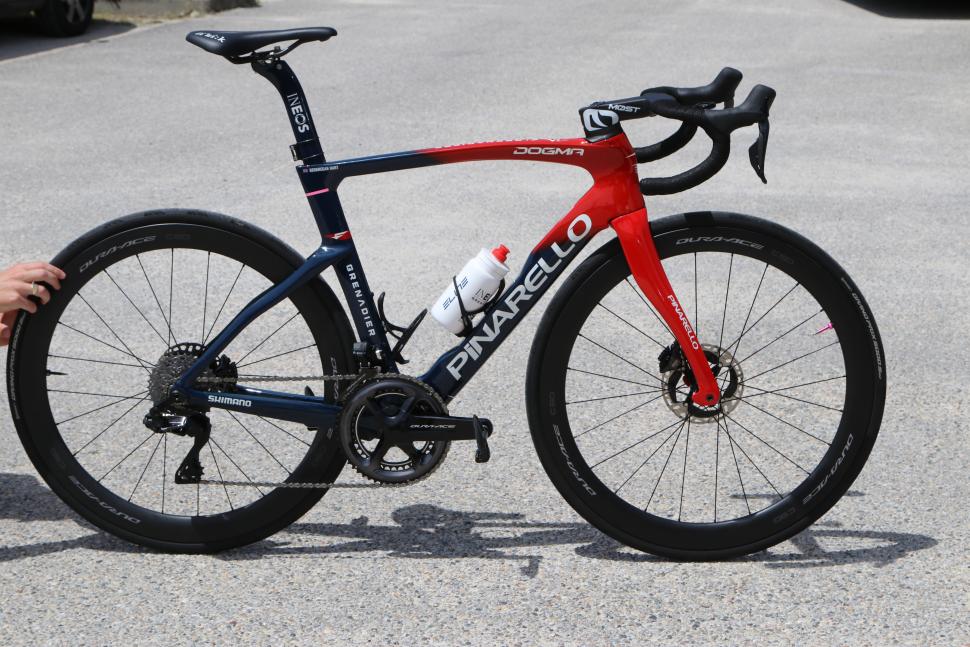 The Pinarello Dogma F might not be the first bike that you think of when it comes to a roundup of the hottest aero bikes given that Ineos don’t have a sprinter, but in Filippo Ganna, they have a rider that could rip the race to pieces.

The Dogma F is, like the Tarmac SL7, the one bike that Pinarello provides to the pros for all road stages. Ineos kits their bikes out with full Shimano Dura-Ace R9200 Di2 grouspets and the 12-speed system is matched with Dura-Ace wheels. 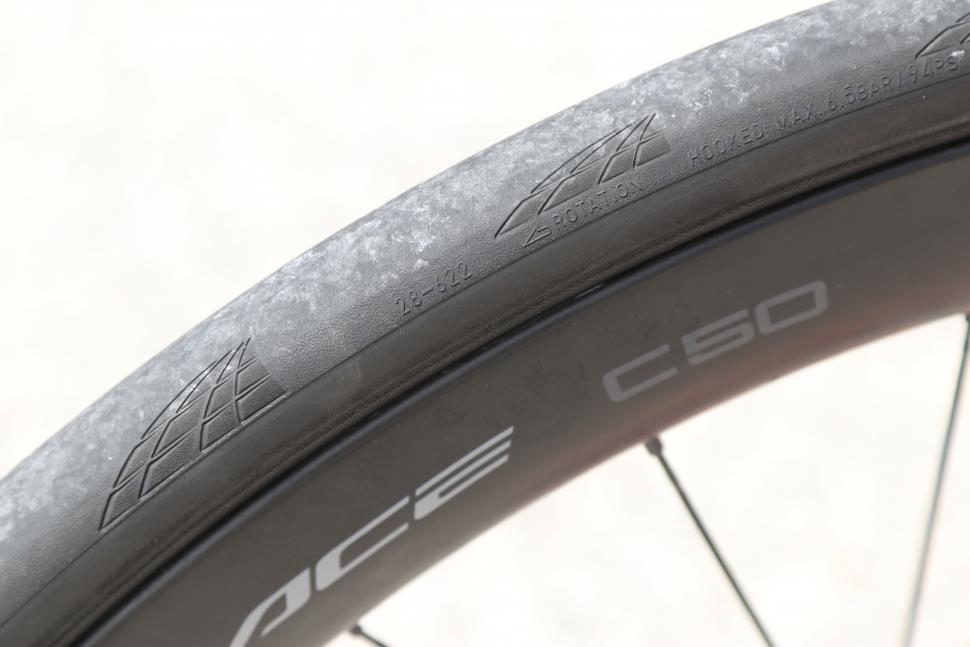 Interestingly, Ineos is now a team that is fully on board with disc brakes and tubeless tyres. The riders will be rolling on the Continental GP5000S TR tyres and most riders look to be running 28mm rubber.

> Check out the tech behind the Dogma F here

Which is your favourite? Let us know in the comments below.