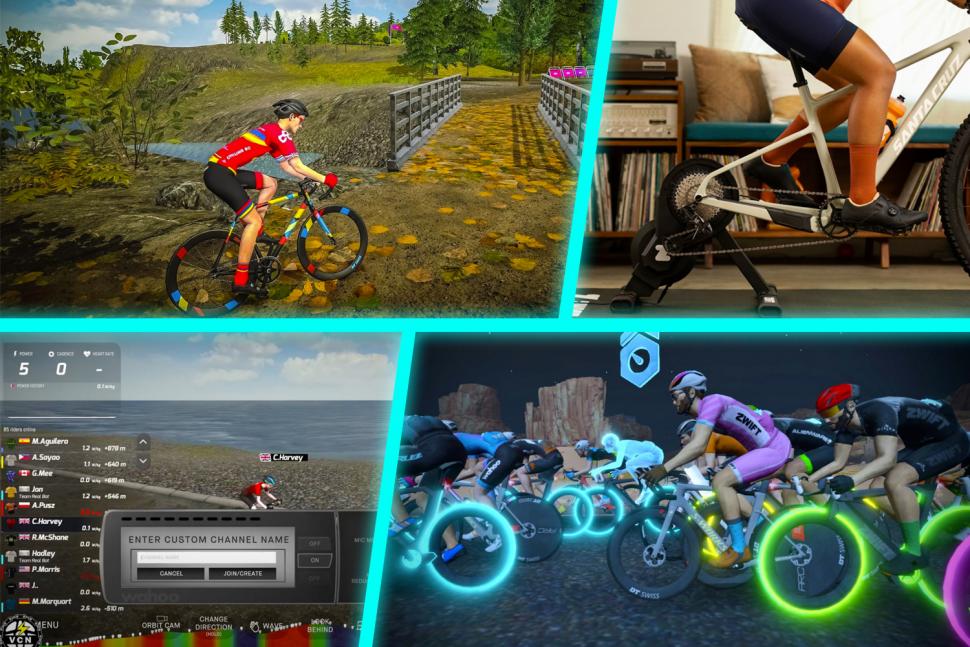 The indoor cycling arms race: are virtual training platforms getting better and better?

With multiple virtual cycling platforms now competing and pushing each other to be better, those of us who crank out the 'miles' indoors have never had it so good. Here's the state of play right now
by Christopher Schwenker

Article revised to clarify that Wahoo RGT has no official affiliation with the 2023 UCI World Championships.

Hot on the heels of significant release updates, the industry-leading virtual cycling platforms are changing the game at a pace never seen before, and virtual cycling is the winner.

In the struggle for supremacy this 2022 indoor cycling season, the superpowers have faced off in a battle to claim their stake in the virtual cycling landscape. 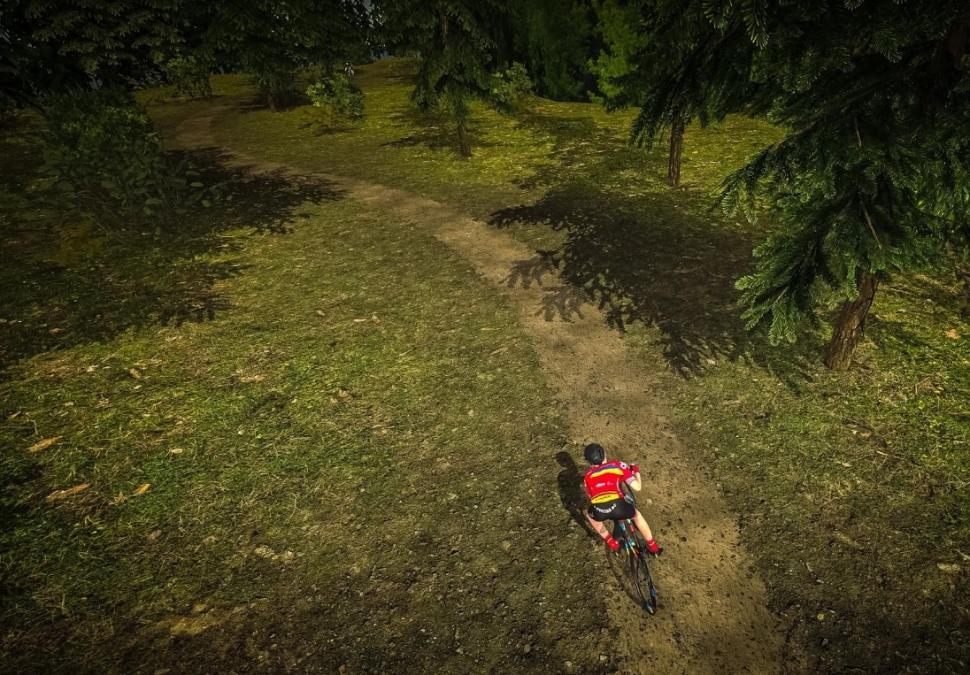 The opening salvo came from Zwift in early September, with an ambitious rollout featuring a host of improvements. Wahoo RGT recently returned fire when on 25 October, it announced the immediate release of several highly sought upgrades. The cycling community is the victor in this virtual arms race as the many platforms push to raise the bar.

Wahoo acquired RGT in April 2022 and began working on integrating and developing its membership offering. "Daylight savings mark the start of the indoor training season for many," according to Wahoo spokesperson Dana Berry-Monroe, "so we timed our exciting new features and updates to launch at this time." 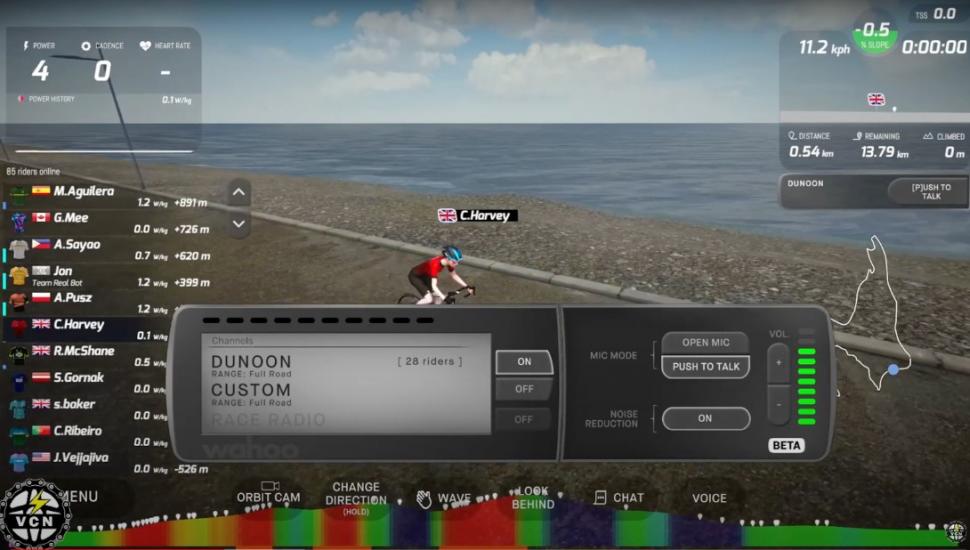 The crown jewel of Wahoo RGT's release in the eyes of many of its community members is the introduction of integrated voice chat to the platform. The first of its kind, the innovative voice feature streamlines communication between riders, removing the need for third-party apps like Discord and messenger voice.

“It's a straightforward design that works and is simple, intuitive, and user-friendly,” says Riley Harvey of the Virtual Cycling Network (VCN).

The main or open channel allows a rider to talk with fellow cyclists sharing the road and during group events. Friends and teammates can create customisable private channels, and a race radio is available for event organisers to provide instruction or share the insight of coaches or guests. 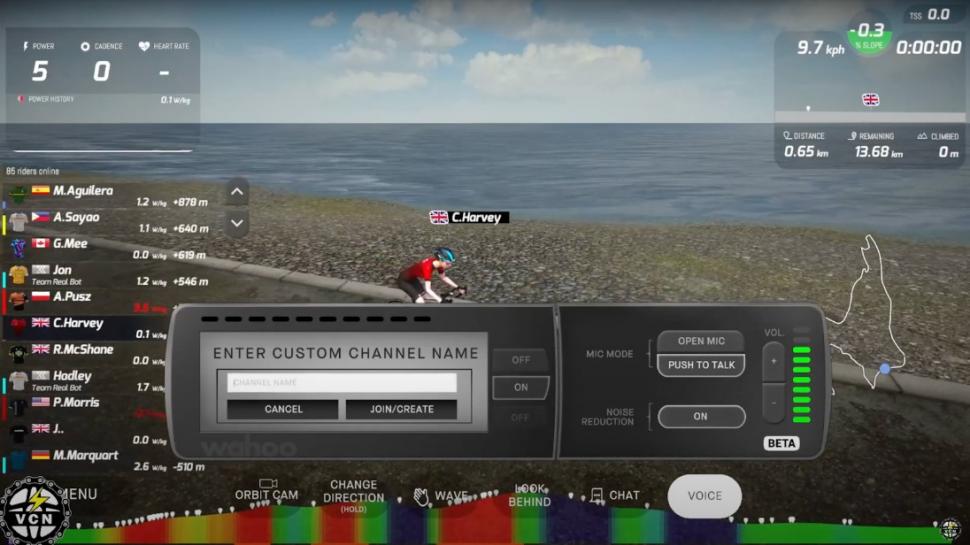 RGT is testing proximity features that allow you to talk to riders nearby to give a quick "hello", or an "on your left" that they intend to add soon. It's all controlled through a built-in control panel on the user display.

Voice chat brings RGT users functionality that eliminates an added layer of complexity. It's a tried and true aspect of the mainstream video gaming experience that is absent from the other indoor cycling platforms currently.

Zwift has yet to let on that it has plans to integrate voice chat despite the community's clamouring. Instead, its users are distracted by the shiny new car in the driveway borrowed from the Super Mario Kart garage. Like Mario's ghost car, Zwift's HoloReplay feature appears at timed segments on the virtual roads giving the user a chance to race against their previous personal record.

> Zwift releases new features including ability to race yourself

As you approach a timed sprint or KOM, a holographic avatar of your best taunts you at the line, then takes off, and it's on! The visual representation ups the motivation game a notch and provides a practical understanding of pacing. Holoreplay is the evolution of Zwift's wildly popular PacePartners feature, giving riders seeking a group ride or social workout a 24-7 opportunity at various paces. 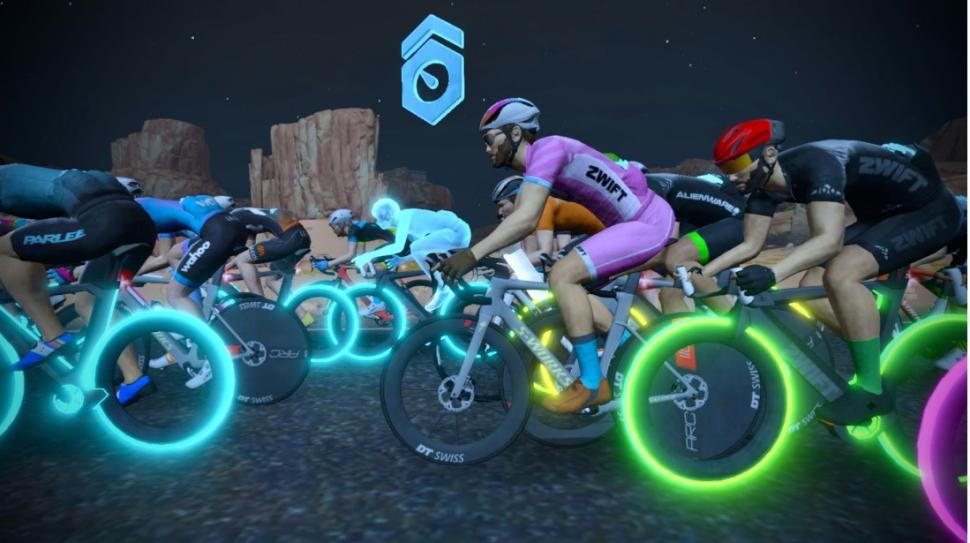 The concept is not novel, and RGT has its own called Real Bots (RBs). Wahoo-RGT explains that Real Bots are a selection of bots that vary their behaviour based on Real-World cycling scenarios. The RBs differ by FTP and power curve, placing them into classes imitating rider styles, like All-rounder, Time trialist, Puncheur and Sprinter.

When sparked by specific triggers, the RBs change their power output and can sprint, ride a tempo pace, or slow down to recover, and the experience is customisable by users.

"When combined with RGT's pace bots (steady w/kg at all times)," notes early RGT adopter Jason Hurst, "RBs invigorate a solo ride and enable an exciting unstructured training session once the user is familiar with their behaviour and configuration."

The bots distinguish RGT and Zwift, as does the recently added "Ride Now" feature. Users who select "Ride Now" are teleported to the rider they've chosen to join in the virtual world they're riding. It will come in handy when searching for a friend, creating a meetup, or during group rides and events when you've fallen off the pace.

A feature common in its appeal to the greater virtual cycling community is the longing for new roads and routes to ride. With the recent update, Wahoo X launched the 'Dunoon Crossover' on RGT for more variety and the chance for their members to preview some of Scotland's scenery in a virtual setting ahead of the 2023 UCI World Championships*. 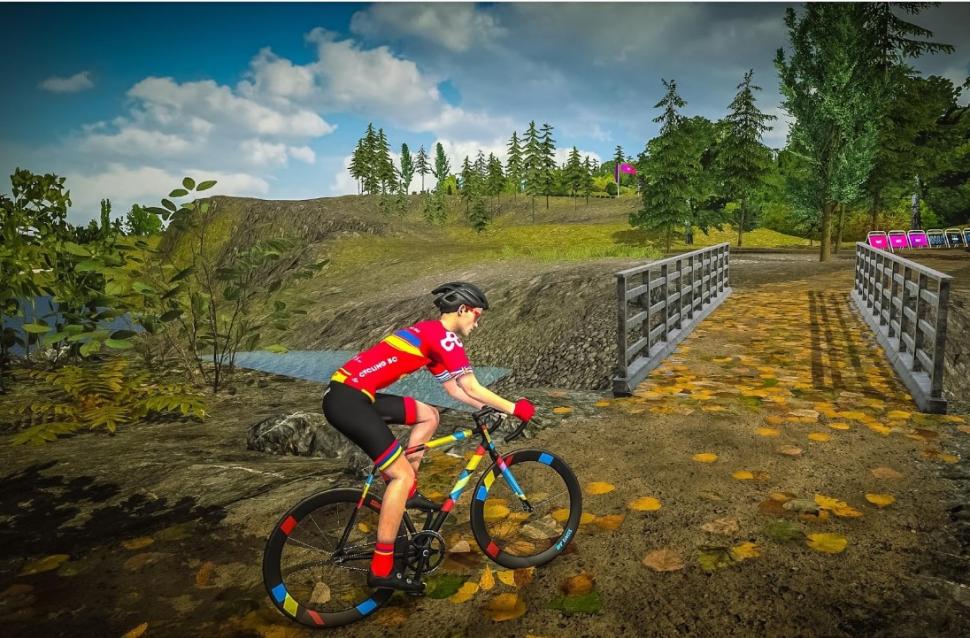 Wahoo RGTs Berry-Monroe says, "This innovative new "Real Road" becomes the first realistic gravel and MTB experience in the virtual riding category. Single-track off-road sections and resistance changes based on the road surface bring a new experience to virtual riding and racing, as riders must now time their sprints and overtakes." 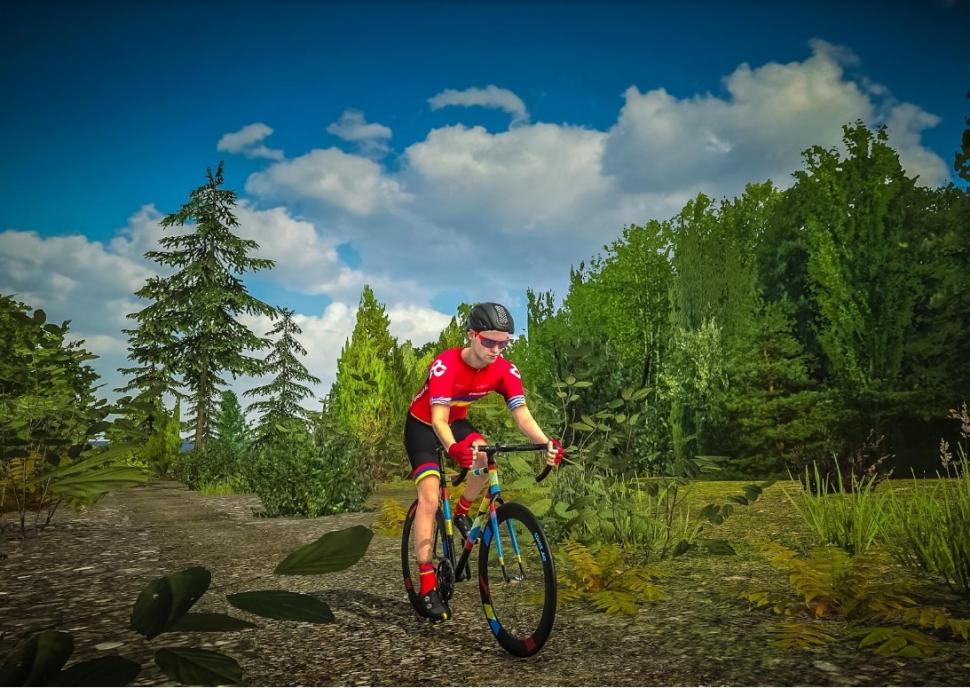 The update brings the RGT 'Real Road' library to thirteen, including iconic cycling regions in Belgium, Italy, France, the UK, and the USA. Wahoo RGT adds this to its distinct and recently enhanced 'Magic Road' feature giving unlimited ride possibilities. Members can upload their routes via a GPX file and ride, share, and create events using a course of their creation.

Zwift doesn't have magic roads, but it does have a generous offering of virtual miles across nine worlds with hundreds of routes on varied terrain. The Urukazi expansion of the Makuri Islands (Japan) promised before the season is rolling out in November to Zwifters taking part in their monthly ZRacing series. 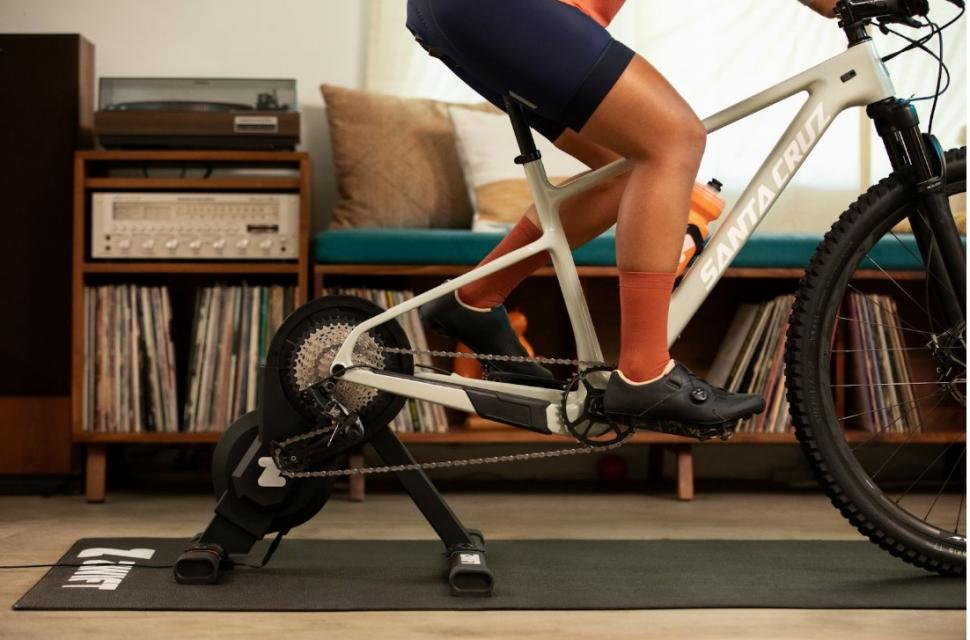 Now with Zwift’s 9 November game update, all users will get a chance to explore Urukazi. The Urukazi expansion of Zwift’s Makuri Island follows their November 2021 Neokyo expansion, adding over 40 virtual miles and eight new routes.

Zwift developers infuse their interpretation of the island's cityscape, country, and coastal scenery artistically, skillfully, and in a way many discerning virtual cyclists consider the industry standard. Plus, the introduction of a new surface type that's not found anywhere else on Zwift. Rumour has it that Zwifters will soon have sand in their cycling shoes and more resistance on their pedals.

Despite pushback, Zwift's foray into the hardware space entrenched by Wahoo has perhaps created the most shock and awe throughout the community. The Zwift Hub smat trainer and the £449 price tag have definitely disrupted the market.

Zwift's first smart trainer streamlines the virtual cycling onboarding process with a pre-installed cassette and easy-to-follow setup instructions at an affordable price point. Not everyone has welcomed the launch of Zwift's own trainer, but that's another story... Wahoo dug in its heels with the recent release, expanding on what it claims to do better than the others in the industry—creating a combined virtual and real-world cycling ecosystem. Wahoo X is a unique all-in-one membership with a host of year-round riding, structured training, racing, and challenges, indoors and out.

"Whatever being a better athlete means to a rider," Wahoo's Berry-Monroe says, "Wahoo X offers the most comprehensive ways to get there."

All virtual cycling platforms are upping their games

Wahoo and RGT are just two of the many virtual cycling platforms trying to get you there, and the others are doing their part to move the needle. New player CADEsport has real-world physics wind simulation. You can gain an advantage by steering around obstacles to avoid crashing and performance-related virtual equipment and component tweaks, like fine-tuning tyre width, pressure and tread for the surface.

“We currently host the highest level of esports racing in the world. We offer unmatched prize money and robust verification.

"Racing on MyWhoosh is a legitimate pathway straight to the World Tour, as evidenced by the announcement of Michael Vink’s signing with UAE Team Emirates who frequently raced within the Sunday Race Club on MyWhoosh.”

MyWhoosh is free, but you can't tell by its ever-evolving platform. Rouvy recently added Strava live segments, and Bkool is hosting the Giro d’Italia Virtual. No moss is growing on the computer-graphic stones of any of the major platforms and it shows in the product.

Zwift and Wahoo-RGT are upping their games at a never-before-seen pace. They have made positive changes to their user interface and home screen, and the "pack dynamics" and game physics are continually evolving. The workout and training options are effective and numerous. They're making game-changing innovations to racing and esports in the name of fairness and competitive interest.

“The Echelon Racing League and Wahoo RGT launched the first ever handcycling avatar in December of 2021 in an effort to make the eRacing scene more equitable, inclusive and representative for athletes of all abilities," says Echelon’s Eric Hill.

!In 2023, the ERL and its partners will launch two additional adaptive bicycles and avatars to further this effort.”

Zwift’s recent addition of a handcycle avatar brings the platform up to speed, making the representation of adaptive athletes, inclusion, and diversity a reality. Virtual cycling is the winner

The platforms are learning from one another and growing. An early adopter of multiple virtual cycling platforms, YouTuber Jonathan Crain, sums it up well when he says: "I think the headline here is that the competition between Zwift and RGT is pushing both apps to be better.The experience is significantly better now than it was a year ago. That’s really what you want to see.”

Zwift's mission is "More People, More Active, More often," and Wahoo-RGTs vision is "Building a better athlete in all of us."

They're getting better with every new game release, and virtual cycling is the victor in this arms race.

* Update, 15/11/2022, 15:13pm: Zwift contacted road.cc to clarify that it is the official virtual fitness platform for the 2023 UCI World Championships in Scotland, as well as hosts of the esports worlds.

A physical therapist with over 25 years of experience, Christopher Schwenker is on a journey to give back to the cycling community for rewarding experiences and fulfilling relationships through the pages of his virtual cycling blog, The Zommunique.com. He rode his bike across the US in 2022 to raise awareness of his cycling-related non-profit, The DIRT Dad Fund.