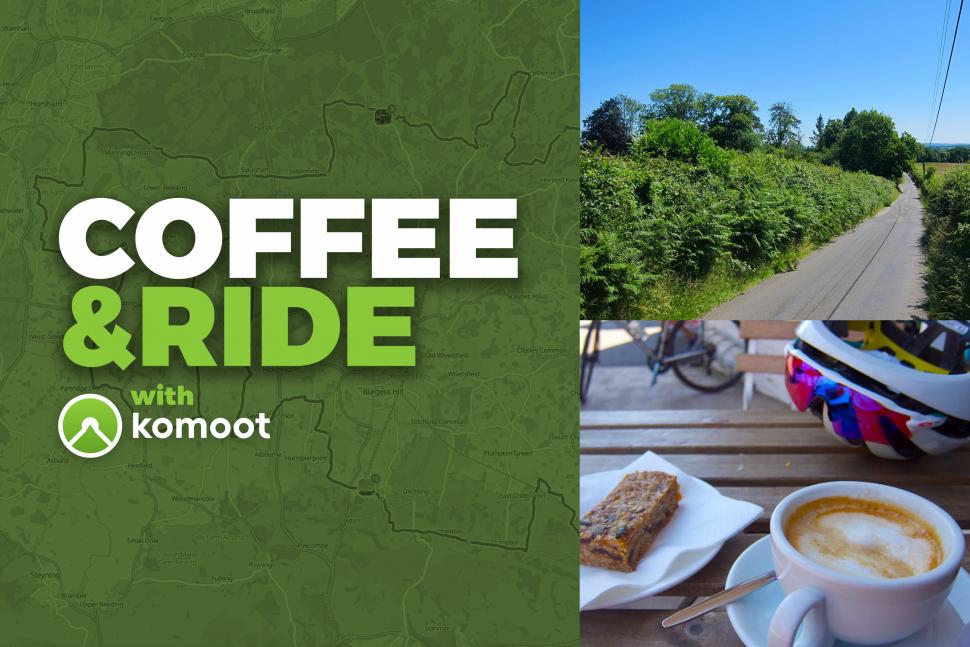 It's not about the Beacon: Jo's superb Sussex Coffee & Ride

VecchioJo takes us on an epic loop departing from just outside of Brighton, with plenty of elevation, quiet lanes and some quality refuelling stops
by VecchioJo

This long ride starts and finishes in Hassocks, which is about 10km north of Brighton. This means you do miss the traditional ending to a ride round these parts of the infamous Ditching Beacon climb and the ability to reward yourself with ice creams and/or chips by the beach, but it also means you don’t waste a lot of time and effort fighting in and out of the busy town.

Balcombe Tea Rooms is a hidden gem, snuck just round the corner on a quiet unassuming road from where I rode through the quiet unassuming village for years, before I discovered it was there by riding past it on a “I wonder where this goes?” lost lanes explore. Now they know my sandwich order.

It’s been a mid-ride destination on many occasions, a life-saver on a few... we cried when it was shut on that grey damp day and it’s a proper no frills nice place to be. You can sit outside in the summer and warm up in winter while gazing out the steamed up windows, wondering if the mizzle’s going to ease.

They do proper tea in a pot and they’re very cycling friendly as they sit right in the middle of the Venn diagram of those pedalling up from the south and clubs coming down from the big city; but if there’s a bunch of you it’s polite to ring and let them know. They’re also very welcoming because they know that cyclists eat A LOT. There's no dedicated bike parking, you just leave it outside.

If you can’t survive without a pre-ride coffee then you can do worse than Proper where the ride starts. It’s a cycling-friendly cafe with racks out the front and a courtyard out back

As well as drinks and snacks you can also pick up ride essentials, and there’s a workshop if you need a tweak. There are plenty of other shops to choose from on Hassocks high street for bits and bobs to fill your back pockets if you just want to grab and go though.

This isn’t a route I regularly do as I don’t even do regular routes, but I know the roads round here well enough to just make it up as I go along depending on time and inclination. This route, though, is both a reflection of the kind of riding I prefer, which is the wiggly less obvious lanes and with as many hills in as possible, and it’s a great representation of the cycling around this part of the world. The start point of Hassocks is on the London to Brighton train line and has easy road access where the parking’s easier and cheaper than by the seaside too.

A quick spin through the sleepy trim bungalows and you’re rolling along Underhill Lane, which as its name suggests hugs the north scarp of the Downs. Within a handful of kilometres you ride straight across the junction at the bottom of Ditching Beacon. If your legs and lungs are up to it so early in the ride you can turn right here and it’s a simple up and down if you want to tick that box, but I can guarantee there’s enough climbing on this ride to suggest this might be a rash decision. Keep heading east and just after Plumpton you turn north and head up into the quiet lanes of the Weald.

It’s all comfortably undulating going through Cooksbridge, Barcombe and Piltdown, site of the Piltdown Man evolutionary missing link hoax, and then to Fletching where you can stop at the village stores if you didn’t start with a coffee and fancy one now you’re 30km into the ride. You probably shouldn’t have too big a bun with it, as some tasty hills are about to start soon...

A few kilometres later you turn right at an easy-to-miss junction onto the teeny Slider’s Lane, that rises pleasantly through the trees to get your legs in the mood for what’s about to happen to them.

Cross the main road and turn left at the old pond for a quick descent into the first draggy climb of the day all the way up to Chelwood Gate, the bottom section of which is enclosed, dark and cold, even in summer, and in true Sussex fashion what you think is the top is never quite the top.

The levelling off at the left turn is always a relief, and there’s a bus stop library if you need a little sit down and a read. It’s quite lumpy for a while now as there’s a classic Wealden holloway steep down-and-up as you skirt Ashdown Forest on Birchgrove Lane, with a sketchy ford at the bottom (there’s a footbridge on the left if you’re nervous) and a hefty winch back into the light out the other side. The road surface all the way through here can be a bit, um, Belgian... so take care.

You’re allowed a bit of a breather as you drop past Horsted Keynes station and under a bridge on the Bluebell Railway. with the distant chooof of a steam train making it a good day before the next draggy climb begins. Don’t be fooled by the false summit on Hammingden Lane just after the hamlet of Highbrook, and the small drop before it rises again up to the Fox pub and left through West Hoathly.

There’s a long, slow descent now along the spine of the hill which gives great views to the south, before a sharp right bend steepens the road. It just gets steeper before bottoming out and you’re crunching gears at the base of Cob Lane, an absolute brute of a climb that’s only 0.3km long but is a knee trembling, extra gear-searching, muttered oaths 22% at its steepest point. Thankfully you’re almost at the halfway tea stop now, but there’s still two climbs to go: the short, straight determined one out of Ardingly reservoir and the wiggly one finally up to Balcombe and... cake. Phewf!

The bulk of the chunky hills are behind you now, but there’s still a long steady drag that steepens just enough at the end to take you away from the tea rooms. To avoid too much vurping, go steady and enjoy the long swift descent to Staplefield where we’re back into the permanently undulating terrain of Mid Sussex.

You’re on the local legendary Hammerponds Road now, it’s impossible to tell but this was once a noisy fiery hub of industrial iron production. Luckily you’re doing it the easy way, but it’s still a road that can cheekily suck it out of your legs if it wants, and the short sharp descents demand your fullest attention.

A tricky tight left turn trying to avoid a patch of gravel and perfectly placed drain straight into a sharp rise indicates that you’ve broken the back of the ride, but that doesn’t mean there isn’t any more effort required as there’s yet another long pull to take you towards Southwater. You’re turning off down another cheeky little lane before that towards Copsale, and you can see the purple smudge of the South Downs appear in the distance.

There’s a little black arrow on the map hidden in the trees to contend with on Burnthouse Lane before you can relax for a while on the long approach to Partridge Green, unless there’s a headwind of couse. You’re turning left here but a brief detour to the right will take you into the village if you require snacks.

I’ve tried my best to keep you off main roads because I hate them as much as you and would rather meander about on the tiny interesting lanes, but they’re hard to avoid sometimes. The A281 after Shermanbury is home to fast traffic, but I’ve never had a situation along here and simply engage lone-break-with-10km-to-go mode and power it out. When you turn left onto Wheatsheaf Road things calm down a bit, but it’s still a road that encourages full gas and sneaky looks under the shoulder for the looming peloton. Maybe that’s just me...

You could go straight on here and be back in Hassocks in no time, but because it’s my ride you’re turning north again just to experience some of my favourite lanes and further climbs.

Just after the Royal Oak in Wineham you swing left onto Kent Street that takes you to yet another long drag up Longhouse Lane (the white clapperboard houses aren’t the top if that helps) and then into Spronkett’s Lane just for the name and the oooof of a climb into Warninglid that sneaks up on you as the road curves left.

While people tend to fanaticise about The Beacon when it comes to hills around here, I don't think this is where the real climbing is. It’s in the constant ups and downs and juggle of long drags and short, steep climbs that typify Sussex riding, especially the “I forgot about this one” ones, and it should all be adding up to a bit of hurty about now. Right and right again to another pointless stinging climb and that’s you just about done for any meaningful ascent, although the rouleur-friendly rolling nature of the road down through Twineham might make your thighs twinge a bit.

Avoiding the straight way back once again there’s a little diversion to see you through the flint-walled wonder of Hurstpierpoint College and one final little drag for luck, and then another one before it’s at least a kilometre of glorious freewheeling to the finish, and a tiny bit further still for the chip shop...