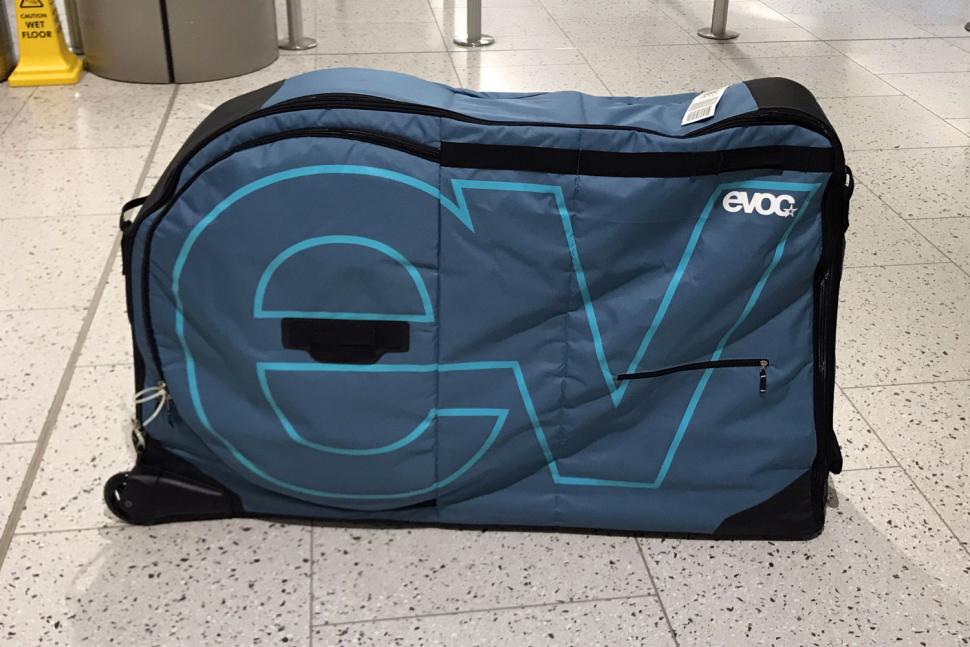 The stuff they never tell you about flying with your bike

It's great to ride your bike abroad; here's how to avoid the pitfalls involved in getting it there
by Mat Brett

Flying with your bike is nothing to be nervous about but a few insider tips can make the experience a whole lot easier.

Here are some of the issues that we've experienced and heard about, along with the best ways to tackle them. 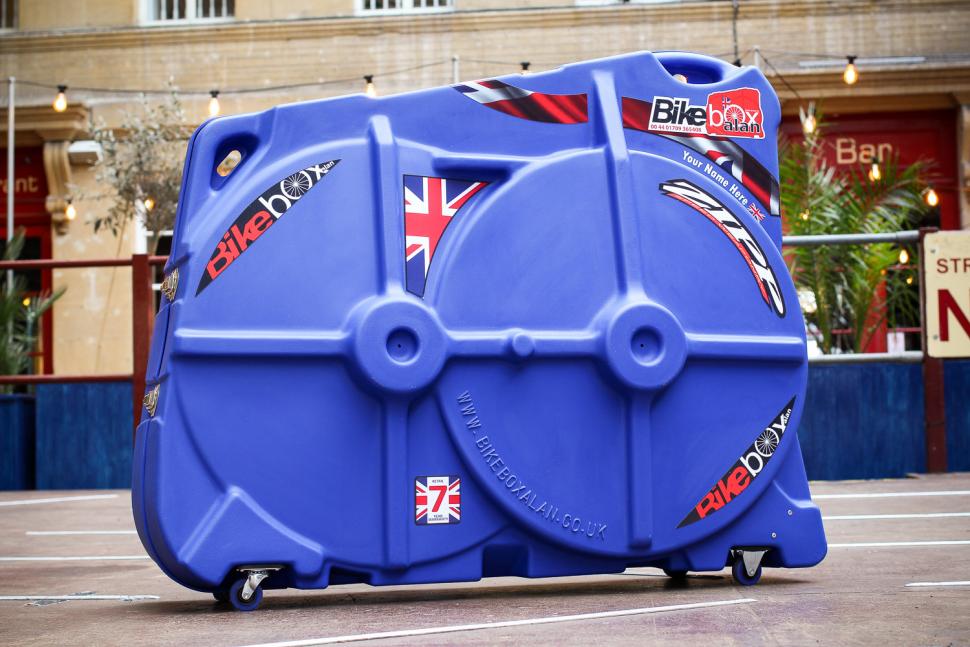 Give yourself plenty of time to pack your bike

Packing your bike might take longer than you think, especially if it's your first time with a new box, so don't leave it until the day you're flying. Some brands have detailed instructions to follow or even online videos to help you get it right. 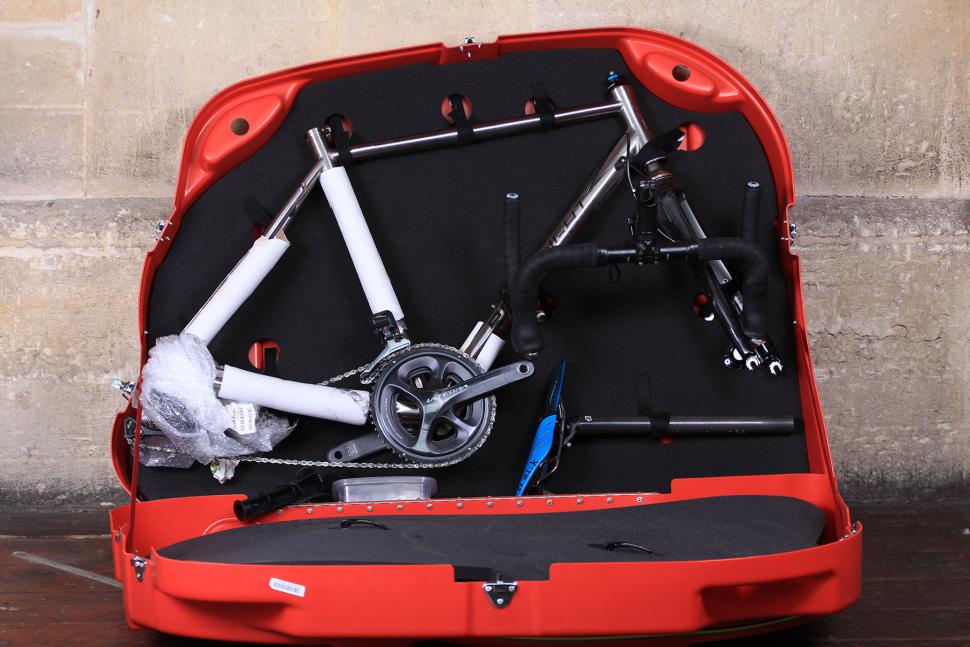 Fair enough, once you've done it a few times you can be more carefree, but to begin with give yourself bags of time.

Mark your saddle height before taking your seatpost out of the frame. A piece of tape around the post will do the job. It just makes life a little bit easier on the other side.

Arm yourself with loads of bubble wrap, foam pipe lagging (available cheaply from DIY stores), and tape (electrical tape is perfect), and cover up everything you can – frame tubes, crank arms, handlebar, stem, seatpost...

Pack everything carefully and don't forget that security could open your bike box to check what's inside, and they might not be so attentive when they repack it. The more you have covered up, the less chance there is of anything they leave loose causing damage.

Check out 16 of the best bike bags and boxes

Be particularly careful with disc rotors (they can get bent), chainrings and the rear derailleur, all of which can be damaged quite easily.

We always use an old set of quick release skewers (rather than the set we intend to use when riding the bike) to attach the wheels to the sidewalls of the box just in case one gets damaged in transit. 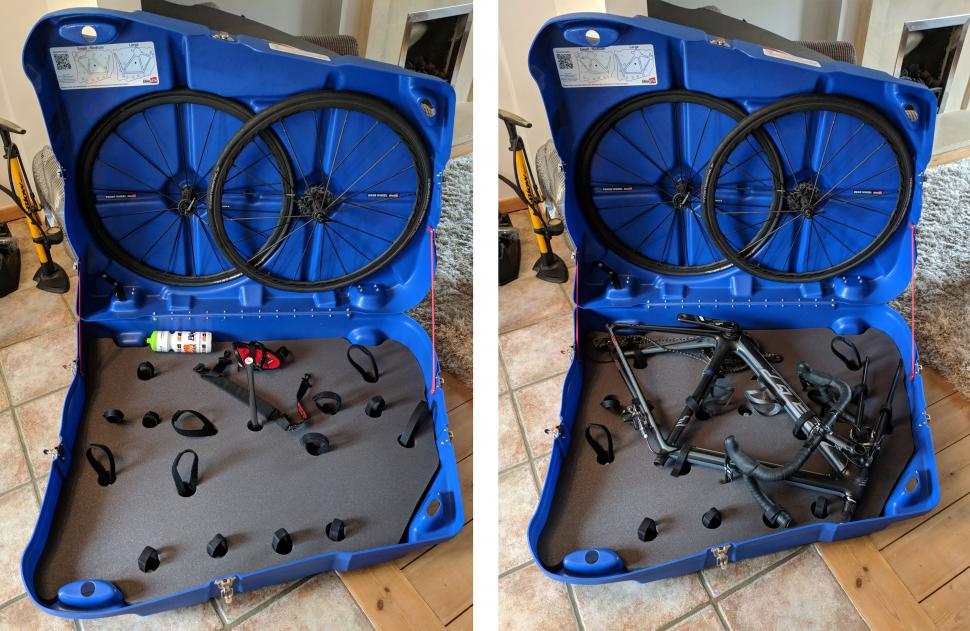 Secure everything inside your bike box

Minimise the movement of everything inside your bike box by strapping it all in place as tightly as possible. Don't forget that the box might find itself upside down somewhere along its journey, so anything not secured could end up anywhere. 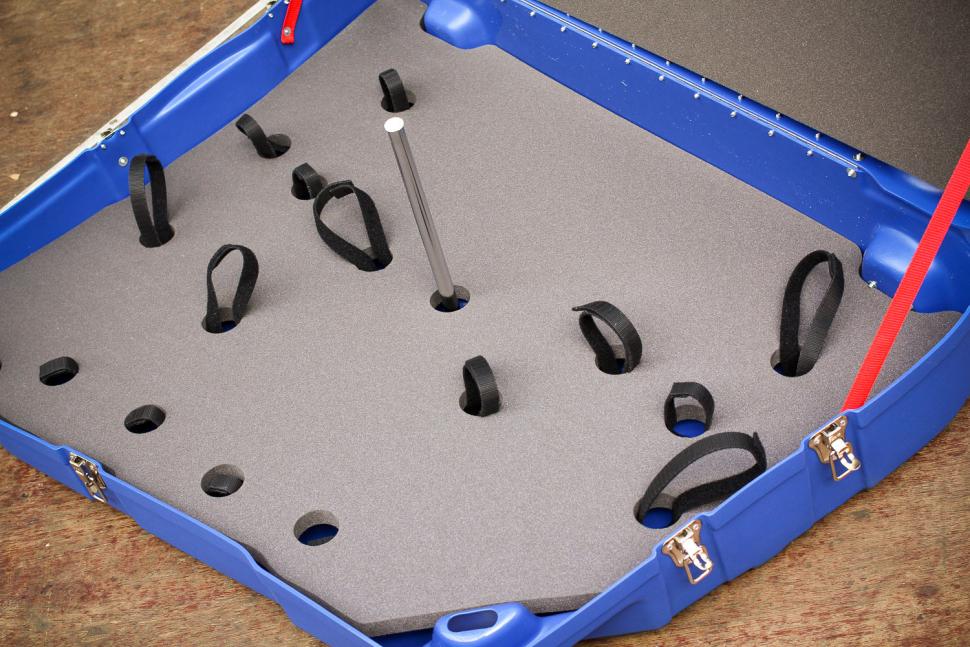 Don't put your pedals loose on the bottom of the box and expect them to stay there, for instance. Either strap them to the side of the box or cover them in bubble wrap and stick them in a bag.

All bikes won't fit in all boxes

Some bikes and boxes don't work well together. Unusually large bikes and some mountain bikes can be tricky, and some time trial/triathlon bikes take a lot of disassembling. 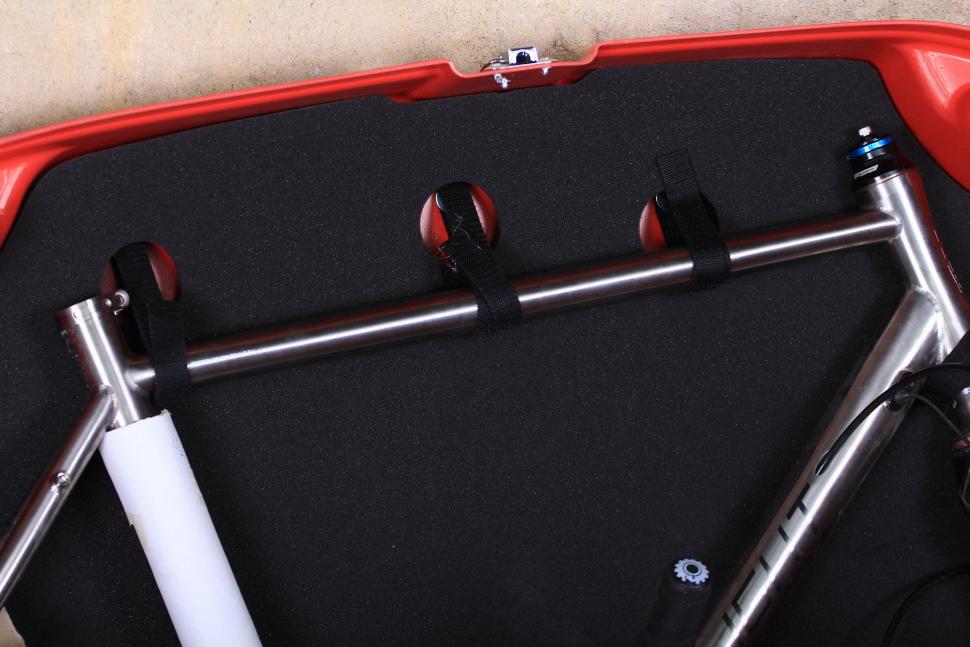 As you'd expect, smaller bikes are easier to pack. You might get away with leaving the seatpost in the frame of a smaller bike, for example, whereas you'll probably have to remove it from a larger frame.

If in doubt, check with the box manufacturer before parting with your money.

Use spacers between the dropouts

Fit spacers between the dropouts of your frame and fork to prevent damage.

You can buy dropout spacers like these ones from Scicon (£21), but plastic ones are fitted to bikes when they're sent from the manufacturer to bike shops, so have a word and they might give you a couple for nowt. 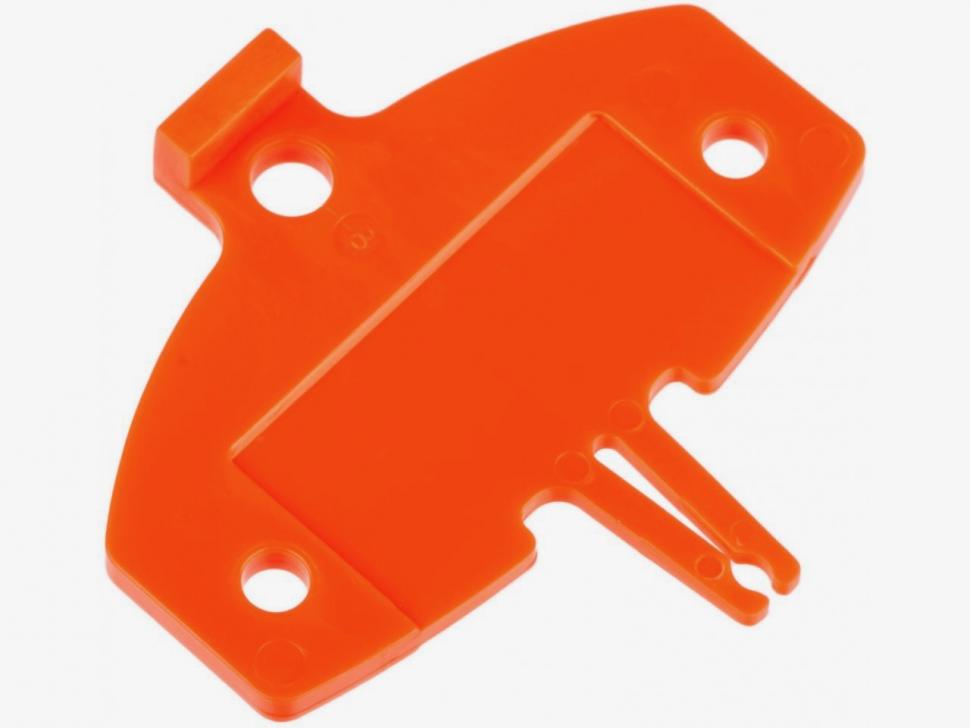 If your bike has disc brakes, fit a pair of pad spacers to stop the brakes closing accidentally without a rotor in place.

You can use a cardboard box as a bike box

You can get a cardboard delivery box from your local bike shop and use that instead of a plastic bike box.

A cardboard box doesn't offer the same level of protection as a rigid-sided bike box, but we know of people who have used them for years without incident. 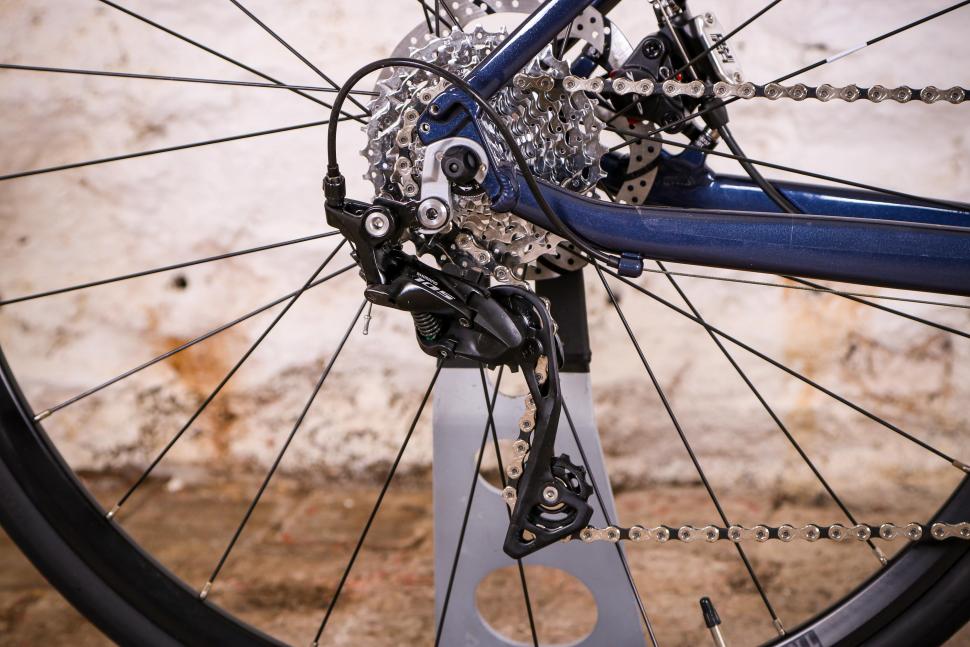 Some people always remove the rear derailleur before travelling. We'd say that you're okay to leave it in place if your bike isn't resting on it (the frame is suspended) and there's no danger of the side of the box or anything inside pushing against it, which could cause the hanger to bend.

If you can't guarantee that, whip it off and wrap it up.

Check the weight of your packed bike box

Bear in mind when you buy your bike box that some weigh much more than others, and different airlines have different weight allowances.

Rocking up at the airport and finding that your bike box is over the weight limit is a right royal pain in the arse, so check it before you leave home.

Hanging scales are perfect for the job, but if you don't have them your bathroom scales will do.

Someone will ask what's in the box

Even if your bike box has the outline of wheels moulded into the plastic and Bike Box Alan stickers plastered all over it, at some point a fellow traveller will ask you what's inside. You could try travelling in full-Lycra but we suspect someone would still ask.

Don't pile stuff on top of a bike bag

Don't stick your bike bag on an airport trolley and then heap the rest of your luggage on top or you'll risk crush damage. Stand it upright to avoid trouble.

You'll have to lift the bike box at some point

All bike boxes and most bags come with wheels, but you still have to lift them from time to time – over gravel driveways, into the back of the car, up steps at the train station, and so on.

Even with a lightweight road bike inside, a fully packed bike box might weigh around 20kg. You can probably manage that for a short distance, but the size and shape can be awkward so you might want to have a trial run ahead of time, and maybe even fashion yourself a shoulder strap out of a length of webbing if you have to carry it far.

While you're at it, a lanyard threaded through a latch can make pulling a bike box a whole lot easier.

The rules covering what you're allowed to carry in your hand luggage at UK airports say no screwdrivers, pliers or "tools with a blade or shaft longer than 6cm". 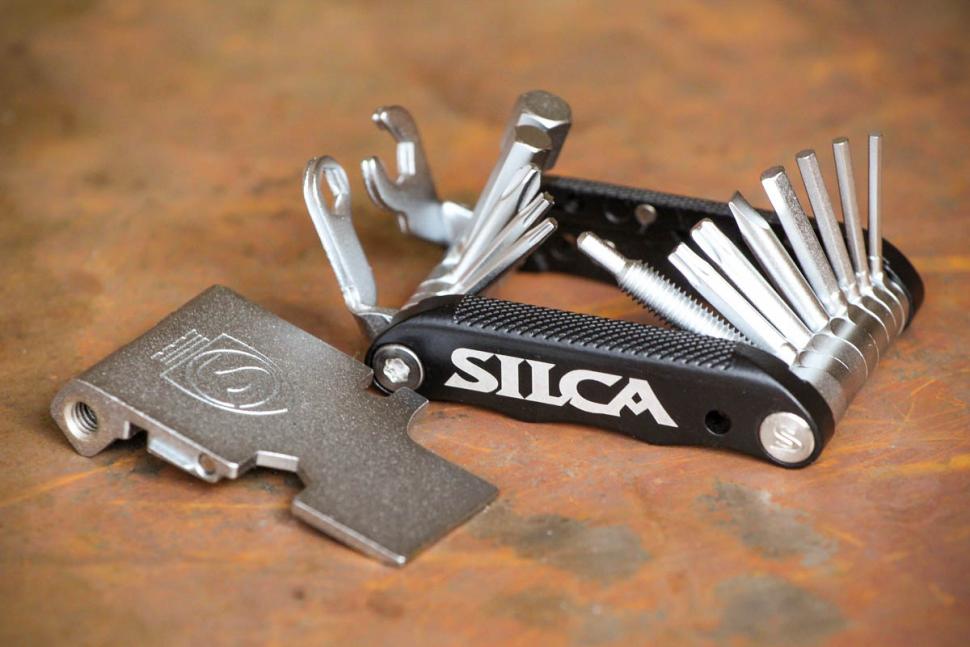 Gatwick Airport's security advice says, "Items that you can have in your hold baggage but not in your hand baggage include... tools (including multi-tools and penknives)."

We've heard of people having multi tools and hex keys taken off them, so you're better off avoiding the hassle by putting anything like this into the hold.

CO2 cartridges can be a hassle

The UK Civil Aviation Authority (CAA) says that you can carry "no more than four small cylinders of carbon dioxide or other suitable non-flammable non-toxic gas per person and the water capacity of each cylinder must not exceed 50ml".

For CO2, a gas cylinder with a water capacity of 50ml is equivalent to a 28g cartridge. 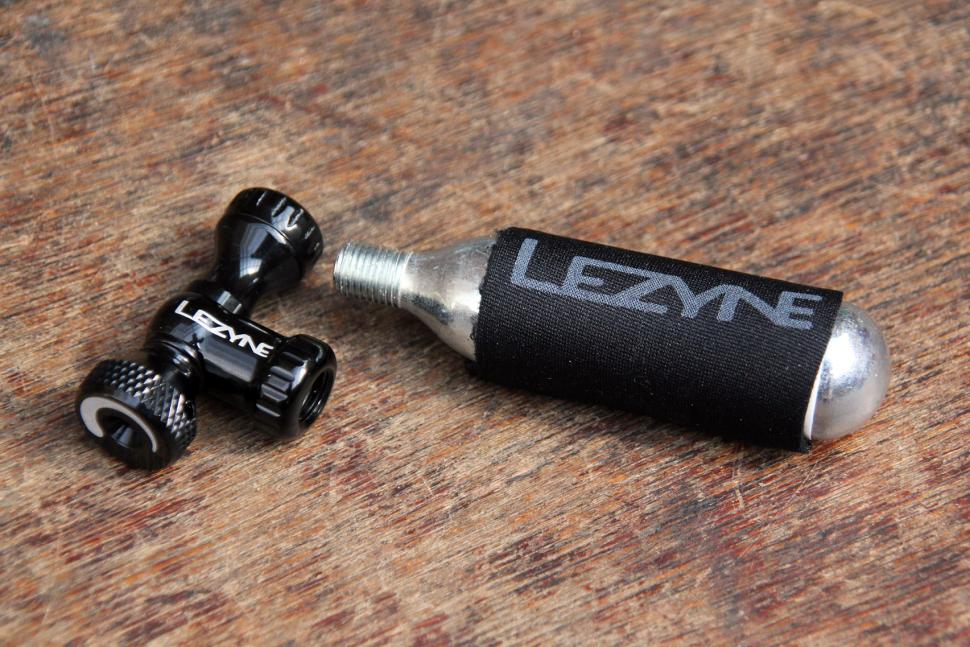 However, Gatwick Airport's security advice says, "There are some items that you’re not allowed to take on your aircraft in either your hand baggage or your hold luggage [including] any gas cylinders."

The US Transportation Security Administration (TSA) says, "Except for personal medical oxygen cylinders, you can only carry an EMPTY compressed gas cylinder onboard a plane."

If you take them, be prepared to lose them.

Some airlines are more bike-friendly than others

Every airline publishes its bike carrying policy online; just Google 'easyJet bike' (or whatever) to get the info you need, including size and weight limits, and charges.

Bear in mind that where additional fees apply they'll be charged in both directions. If you want to take your bike with Ryanair, for example, it'll cost you £60 for the way out and another £60 for the way back (that's at the time of booking; it's £75 in each direction if you want to amend an existing booking).

British Airways currently allows you to take a boxed bike as part of your checked bag allowance, costing you no extra as long as its under 23kg. That weight limit isn't a problem for a road bike, although you might struggle with some mountain bikes and heavier boxes. 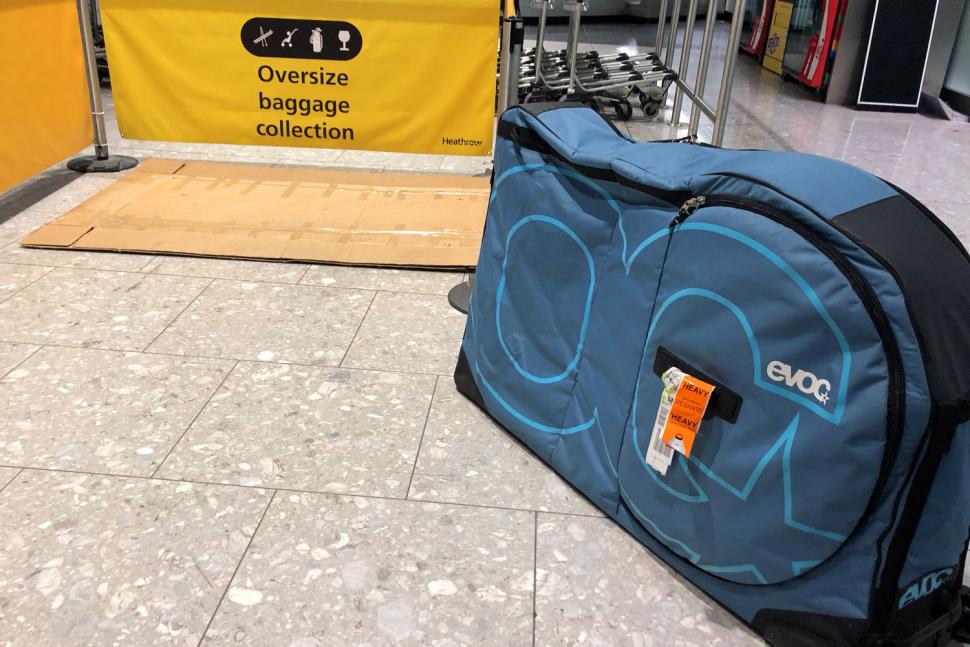 Sometimes there's a designated collection point in the baggage reclaim hall for oversized baggage, sometimes your bike box will appear on the carousel with the rest of the bags and suitcases, sometimes it'll be pushed through a door next to the carousel...

Don't presume that the same airport will do the same thing every time.

Two bike boxes will fit inside a Fiat Panda or a Vauxhall Corsa with the back seats folded down, despite what they tell you at the car hire desk when they want you to upgrade. You'll get a couple more bags in too, but things start to get dicey if you plan on taking much more.

Carrying your bike on a train or bus at the other end?

Check the rules. Sometimes it's easy, sometimes it ain't.

Consider having your bike delivered for you 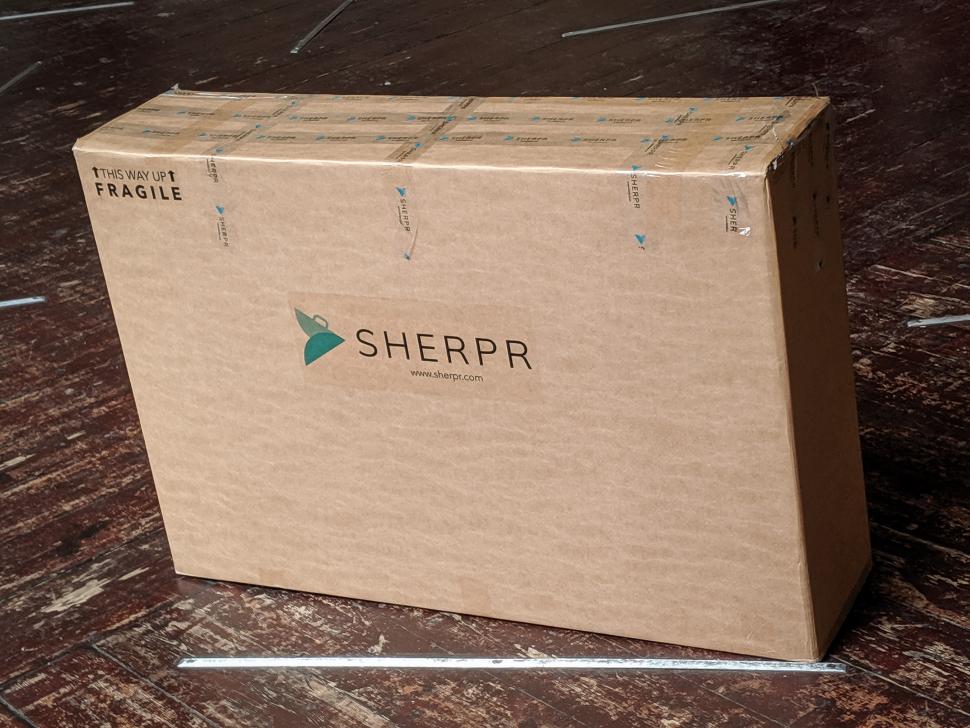 Companies like Sherpr will send a box for you to pack, then they'll come and pick it up and deliver it to your final destination.

You have to pay for the privilege, of course, but it saves you the hassle of lugging your bike around.

Make sure your bike is insured for foreign travel; if anything goes wrong it could be expensive. Damage can occur when you're not with your bike and it's sometimes difficult to get anyone to accept liability.