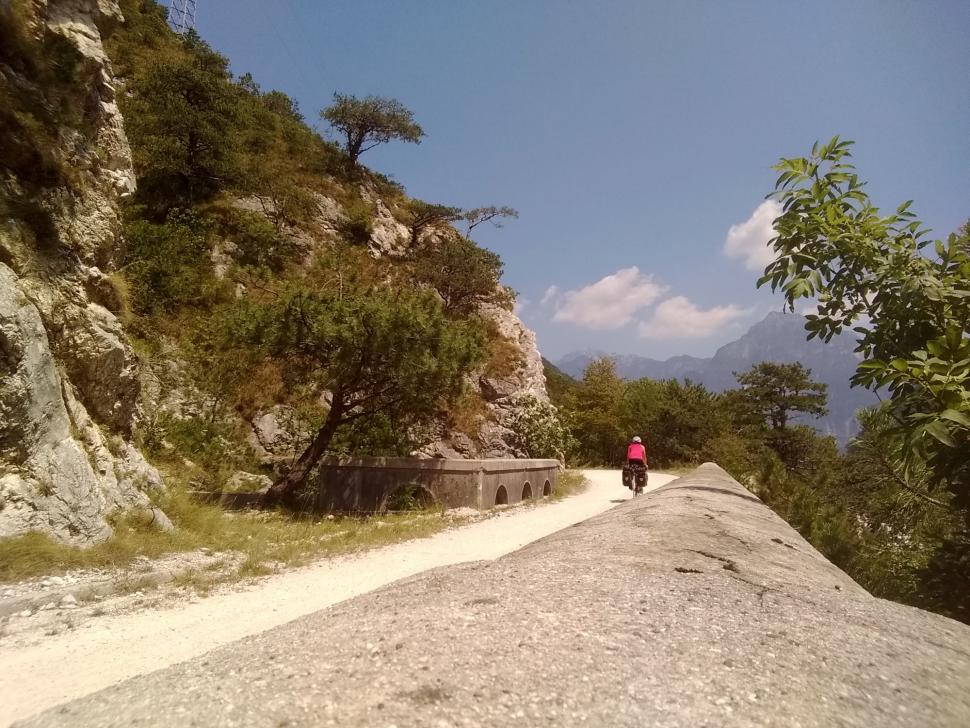 Climbing towards the Dolomites on cycle routes.jpg

Emma decides to take the panniers off, get her bike on a Swiss train and tackle some iconic climbs in the Dolomites as she continues her tour through Europe
by Emma Silversides

I’m 12 days in now and have not yet taken a real rest day. I never really enjoyed rest days when racing. I would get bored. I struggle when touring too! I had one day off the bike while in Kamniska Bistrica, Slovenia, but I don’t think my legs sensed this; I hiked from 600m to the top of Grintovec, a peak at 2,558m.

Unsurprisingly, my legs were screaming at me for the next five days, but it was absolutely worth it. The peak sits just south of the Austrian border and the views are amazing, both into Austria and Slovenia. Even if you’re not into serious hiking, the Kamnik–Savinja Alps offer so much for outdoor enthusiasts and the region, along with Triglav National Park, is a must if you visit Slovenia. I love that I no longer need to ‘perform’ on my bike, so doing other exercise is possible, even if it wrecks my legs. 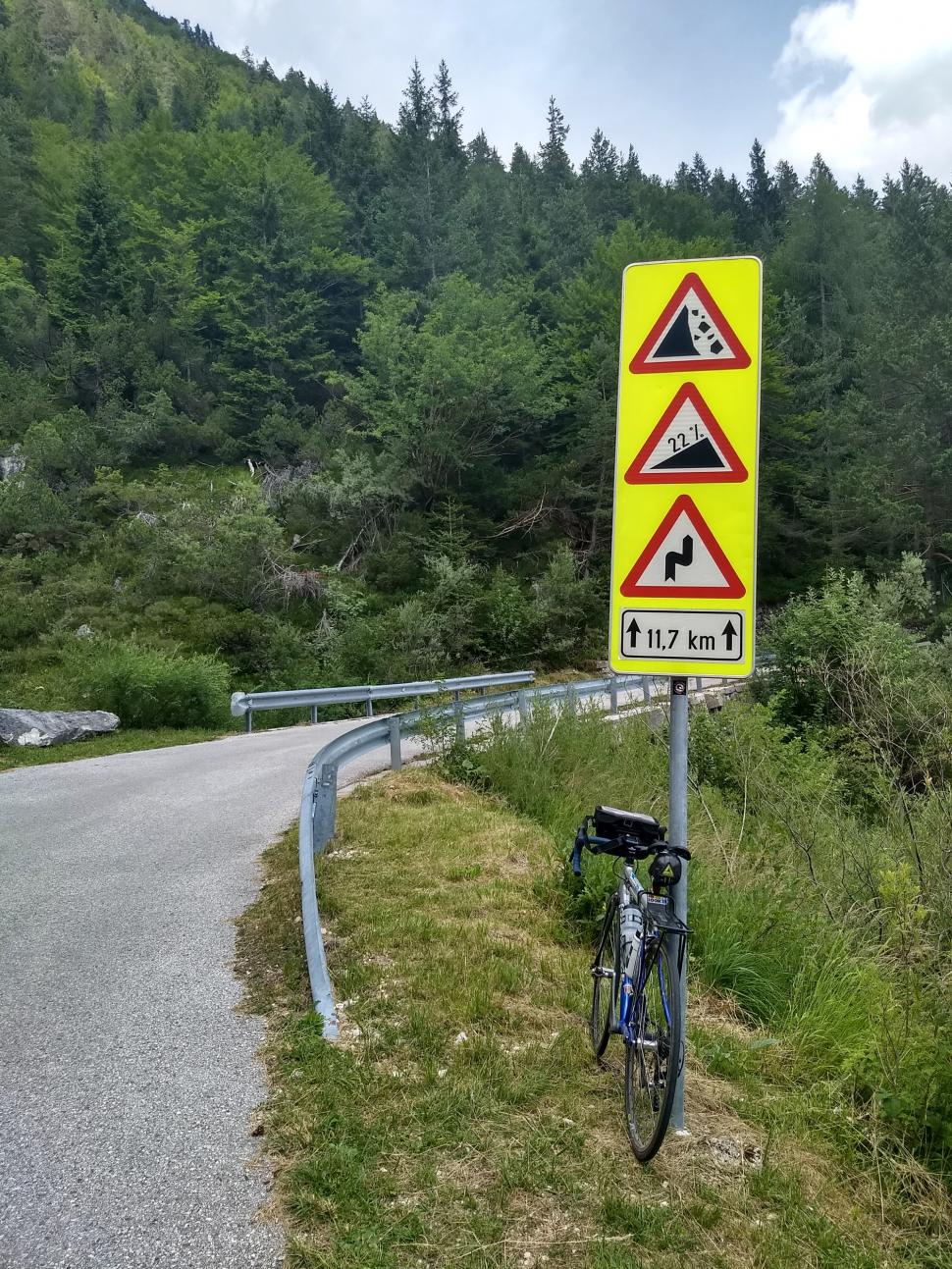 So, back to a proper day off. Sometimes just a day without panniers does the trick. Anyone who has toured will appreciate the rather bizarre and liberating sensation that this offers – an unweighted bike flailing about under you! I opted to ride pannier-less up the Mangart Saddle, an iconic climb in the north-west corner of Slovenia with quite a history, partly due to ski racing since the end of World War II. It’s steep. I wouldn’t have wanted to lug panniers up it given that it goes nowhere.

As with many similar climbs, an early start is advantageous because it’s popular with the motorbikers, as well as general tourists and walkers. The descent was actually a little spoilt by this. It is extremely narrow so getting up any decent speed is virtually impossible. In spite of this, I’d say any keen roadie should have it on their to-do list.

While it’s truly liberating to ride without panniers, sometimes complete days without the bike are priceless during tours of more than 10 days. If you’re not really a sit-about-and-rest person, it’s worth trying to time these days close to somewhere that can offer something cultural, or an activity that will make you take the weight off your feet. Last year I tried white water rafting down the Una (in Bosnia-Herzegovina), this year it was a tandem paraglide off Mangart – literally getting the weight off my feet. These days off often lead to meeting really informative locals or other travellers with friendly advice and tips. 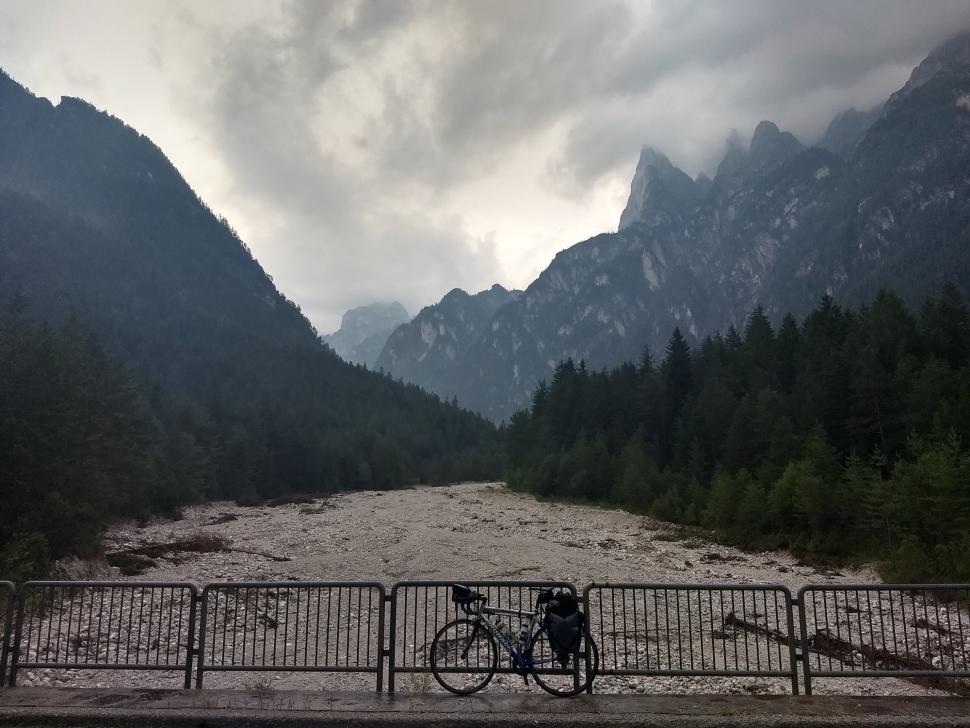 Rested and enthused. I crossed into Italy using a road advised by some Czech cyclists I’d met at the campsite. I used a mix of specific cycle routes and quiet mountain roads to get me to Merano and rode the Stelvio Pass from Prato, descending via the Umbrail Pass to Santa Maria. 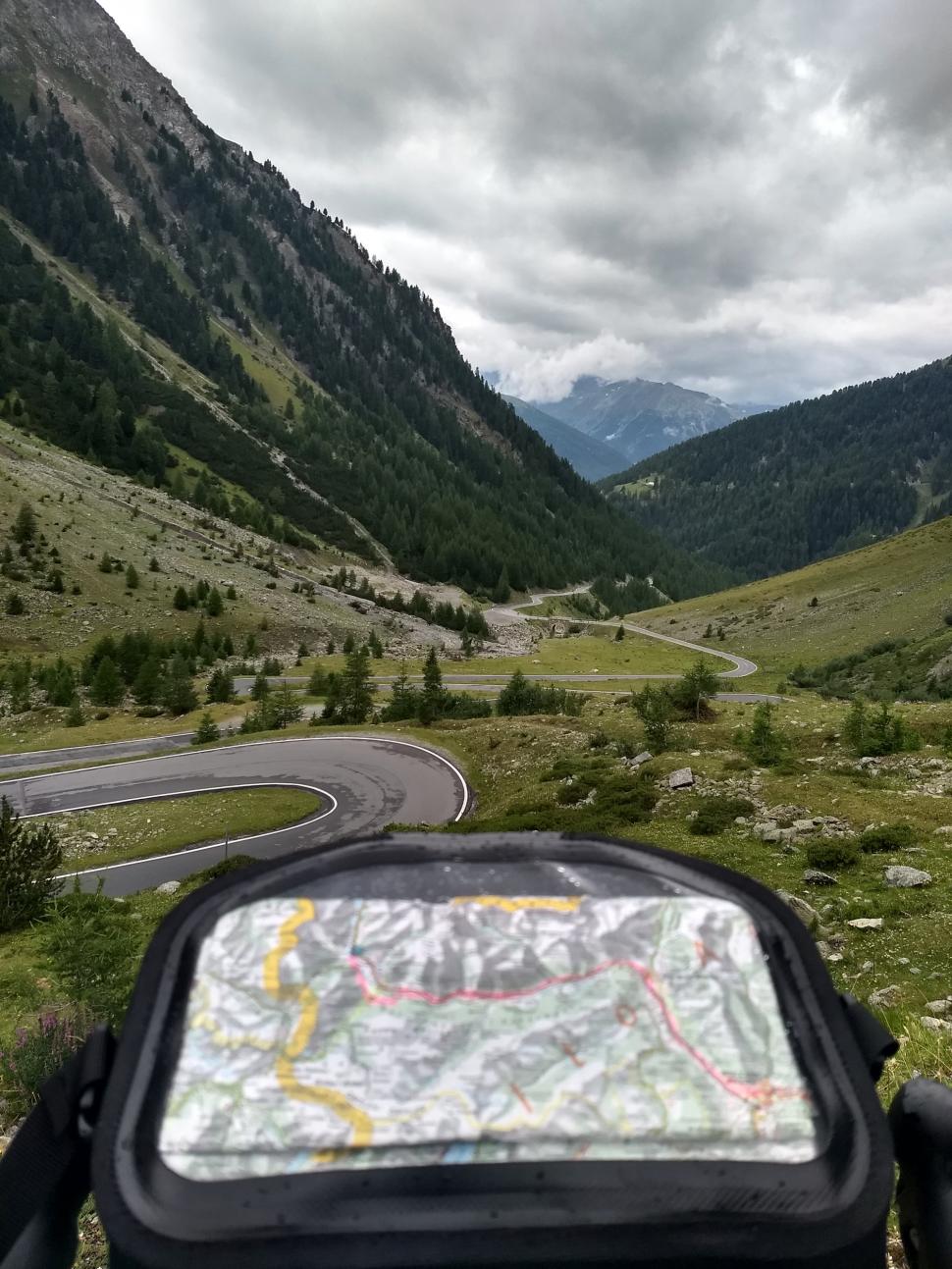 While the Stelvio ascent was cloudy and, for the final 5km, drizzly, the descent was bone dry and clear. I did resort to an old-school newspaper for the first section; there is very little opportunity to work on a descent when you are loaded with panniers and kit – you really do just fly down. Weirdly, I didn’t see any other tourers up there! 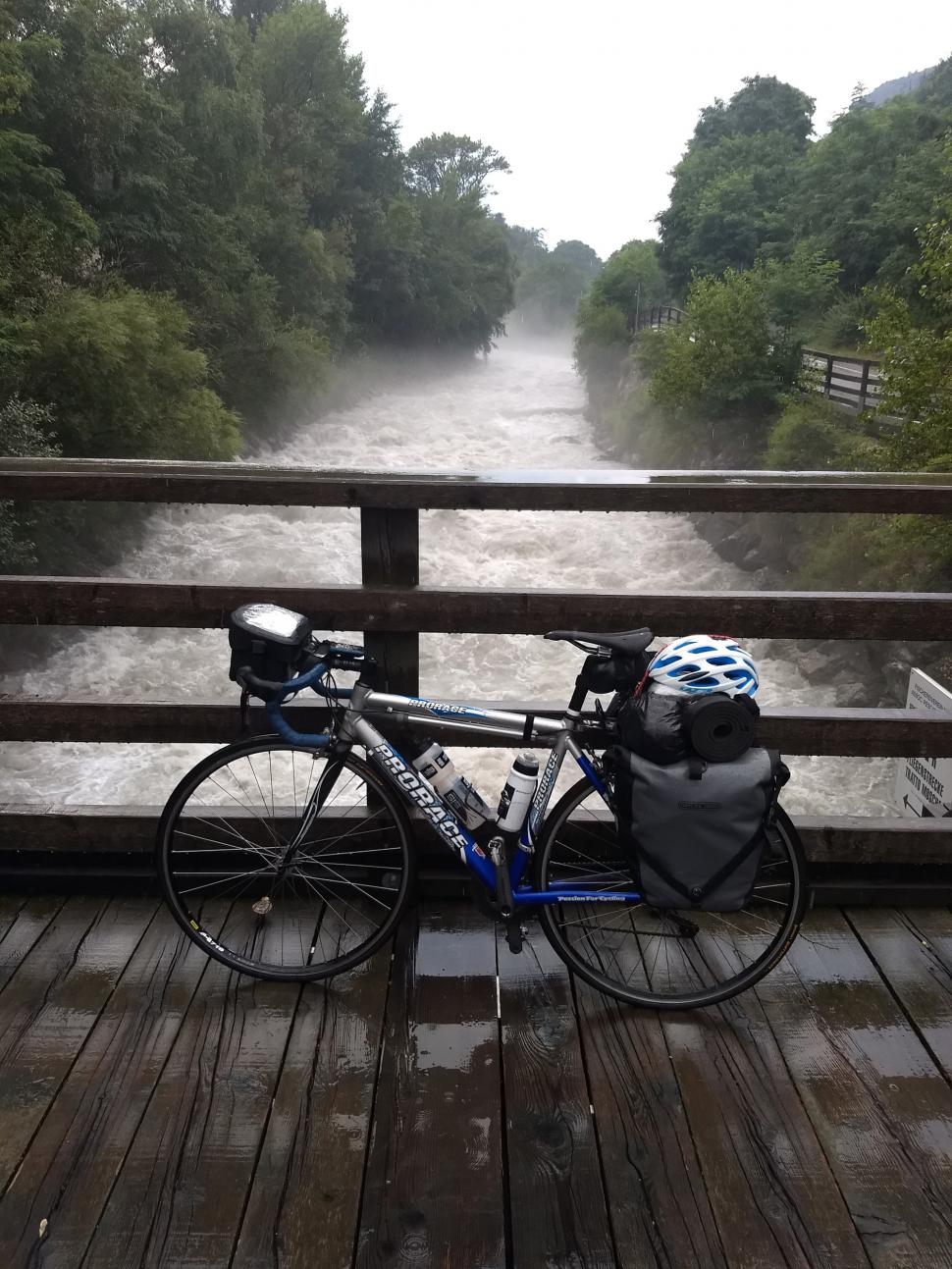 Heading into the mountains goes hand-in-hand with rather unpredictable weather. I’m an all-weather rider. Rain is simply water in my mind and it invariably creates some of the most dramatic scenery possible. I never let it stop me turning the pedals. However, it causes problems from a practical sense; drying your hand-washed clothing isn’t possible. If it hasn’t dried overnight, I either put it on damp (there’s a level of acceptability) or attach it to the side of my panniers and let nature’s tumble drier get to work. Thankfully, European hostels are pretty cheap and getting a bulk load of washing done always possible. I resorted to this after my stint in the Dolomites.

Naturally, I am in Switzerland now and unsurprisingly it’s expensive – not an ideal destination for a tourer on a budget. However, the Swiss can’t be knocked for how they accommodate bikes on trains. Having ridden the Ofenpass and being keen to cross the border into Germany as quickly as possible, I took one of these trains to Landquart through the Vereina Tunnel.

I’d say the UK is one of the more difficult countries in which to combine cycle and train travel. Don’t let any experiences here put you off European possibilities. While you may be paying to get your bike on board, there’s never a question about there actually being room for it – no reservations required. I used two trains on this tour. I walked into both stations without a ticket and was on a train within 20 minutes. No scornful looks, only helping hands and admiration. 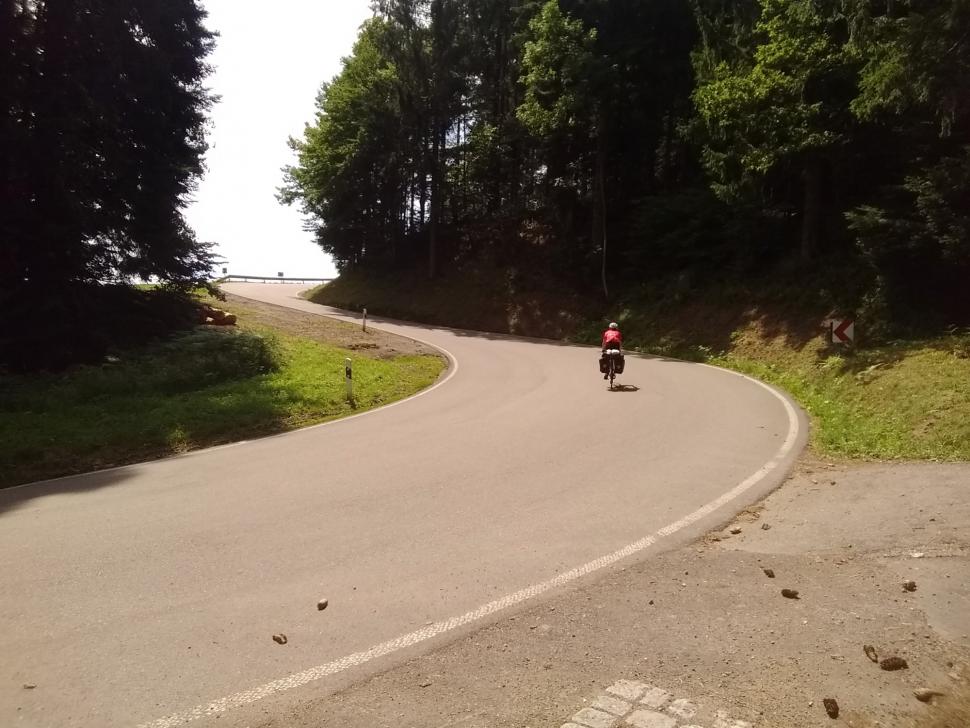 I was excited about getting into Germany and the Black Forest. It turns out I had every reason to be. My first campsite, just over the border, was a great example of the kind I spoke about previously; tucked away, occupied by some really friendly people, run by someone who had the time of day to share stories and offer advice about tourist attractions and the best onward routes (north), via Schluchsee and Freiburg im Breisgau, towards Baden-Baden. The endless supply of local ice-cold beer was the icing on the cake. 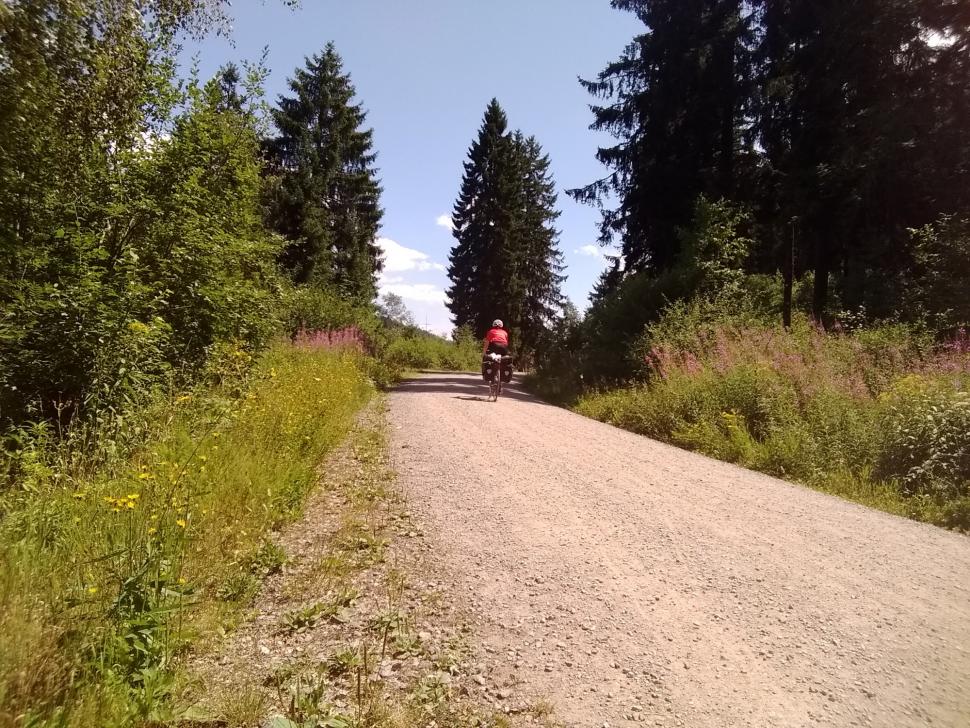 The specific cycle routes and gravel tracks through the Black Forest come a close second behind Slovenia’s offerings that I have previously raved about. The forest is packed with lakes, waterfalls, long, gradual climbs and descents. There are so many on- and off-road option, the later invariable signed, and although I personally stuck to the tame gravel, I saw off-roaders popping in and out of the trees. The forest is vast so, more often than not, I felt I had it to myself. It’s a hidden gem, really, and not so far from the UK. I was sad to leave it behind, but it was time to cross another border and get myself into France…

Check in next week for my final piece in this series, about coping with Sunday in France, avoiding city riding and touring (rather than racing) through former playgrounds in France, Holland and Belgium.