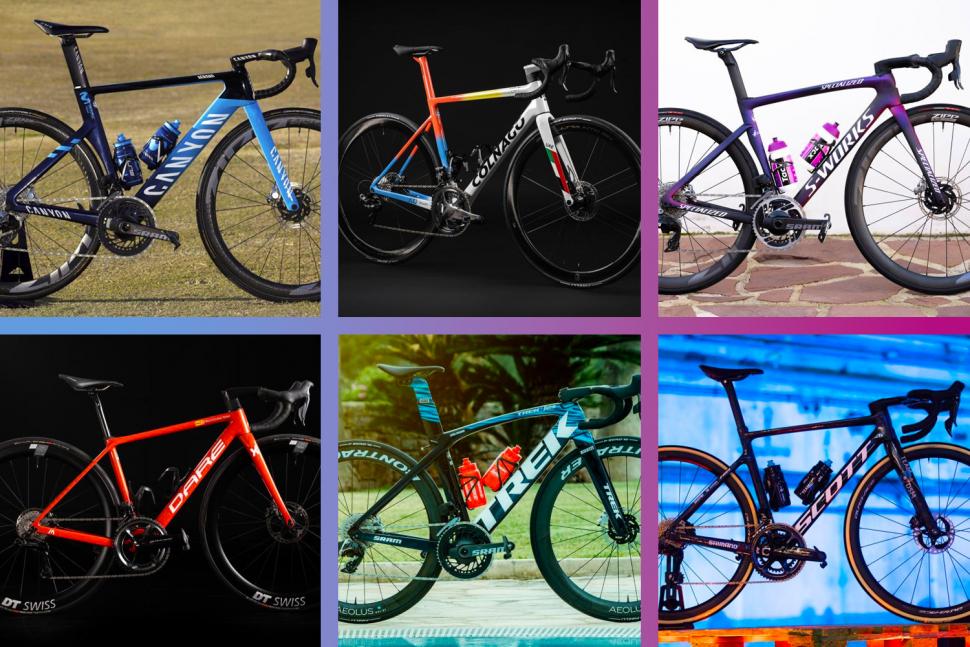 The 2022 UCI WorldTour racing season really kicks off this weekend for the women with Omloop Het Nieuwsblad on Saturday - and here you'll find a definitive list of bikes you can expect to see these talented professionals smashing it on in races.

Some of the women's WorldTour teams are riding the same spec bikes as the male squad, but with different (and sometimes arguably better) paintjobs, while others are on completely new top-end machines… 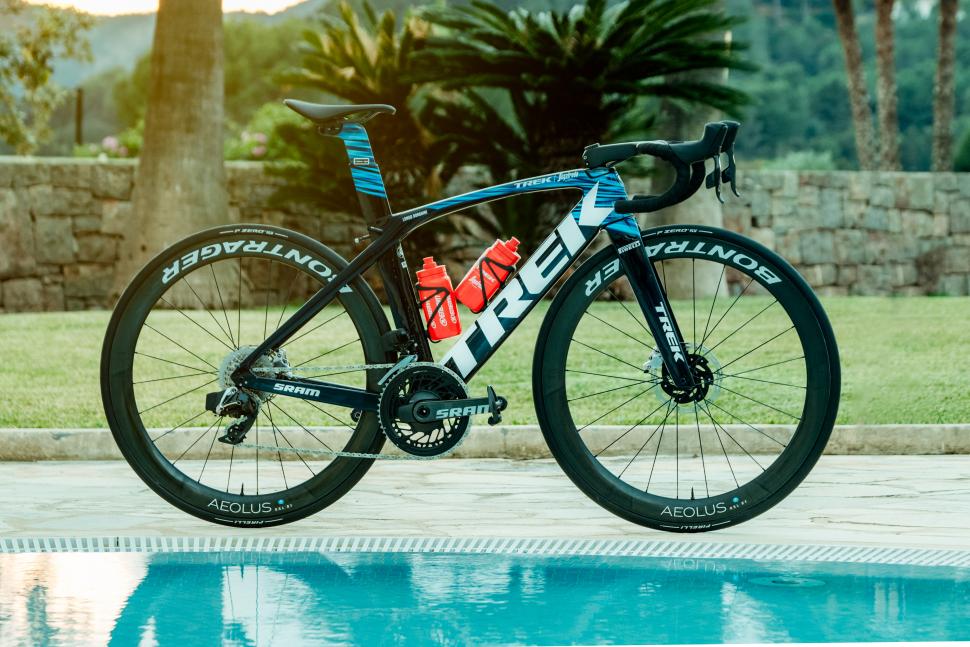 The Trek-Segafredo ladies will be using the same equipment as their male counterparts, but with the bikes getting a lovely light blue finish at the front end.

As the title sponsor, Trek will be kitting out the team with the aero Trek Madone for the flatter days, the Emonda for races packed with elevation, the Domane for dealing with the demands of Paris-Roubaix and the Speed Concept for TTs.

Bontrager is providing its Aeolus RSL37, RSL51 and RSL62 wheels which will be wrapped in Pirelli’s P Zero Tubeless and Tubular tyres. The finishing kit, including the stem, handlebars, seatpost and saddle, are also supplied by Bontrager.

Lizzie Deignan won’t be racing in 2022 as she’s expecting her second child, but Trek-Segafredo has extended her contract until 2024, so we’ll expect to see her back bossing it soon as she did after first pregnancy. 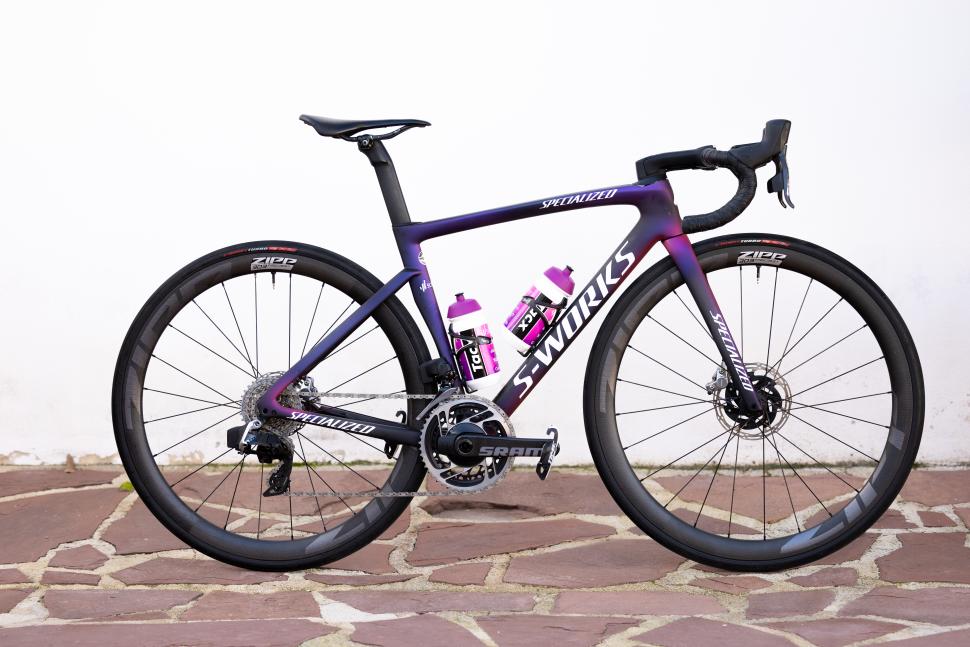 Specialized is the bike sponsor to just one women’s WorldTour team this 2022 season, SD Worx.

The ladies will be riding on the Specialized S-Works Tarmac SL7 frameset that was launched in 2020 as the “one bike to rule them all, putting an end to the idea of a climbing bike and an aero bike”, and it has been coated in a very snazzy metallic purple and pink finish.

Another men’s team has a new women’s counterpart this year for the first time, with the TIBCO-SVB ladies joining with the men’s EF Education squad for 2022.

The female riders also have SystemSix and SuperSix bikes to choose from, with blue and pink lines beautifully criss-crossing the white-based frame - enough to be noticed, but not too overcomplicated.

The British riders to look out for in pink are Lizzy Banks and Abi Smith.

Lapierre bikes make it into the women’s peloton, with the Aircode DRS and Xelius SL ridden in a classy dark navy blue colourway by the French women’s team.

Cecilie Uttrup Ludwig, the Danish rider who lights up the races with exciting, explosive energy (and in equal amounts off the bike) is the big name in this team. The Norwegian outfit is home to three British riders - Hannah Barnes, Elinor Barker and Joscelin Lowden - and has already shown its commitment to supporting riders through motherhood by giving full maternity leave to Elinor Barker, despite discovering she was pregnant while still negotiating her contract.

The team are riding Dare’s lightweight Ma-Afo frame along with the brand’s Ergo Ace handlebars and stem system.

The bike is equipped with Shimano Dura-Ace Di2. The team riders have the choice of either the 50mm or 62mm aero DT Swiss ARC 1400 DICUT wheels, and 25mm or 28mm Schwalbe Pro One tyres. Prologo provides the saddles.

This is equipped with SRAM’s Red eTap AXS groupset and Prologo saddles and handlebar tape, with Vision providing the wheels (Metron SL), Goodyear supplying the tyres and Time’s pedals finish off this classy bike. 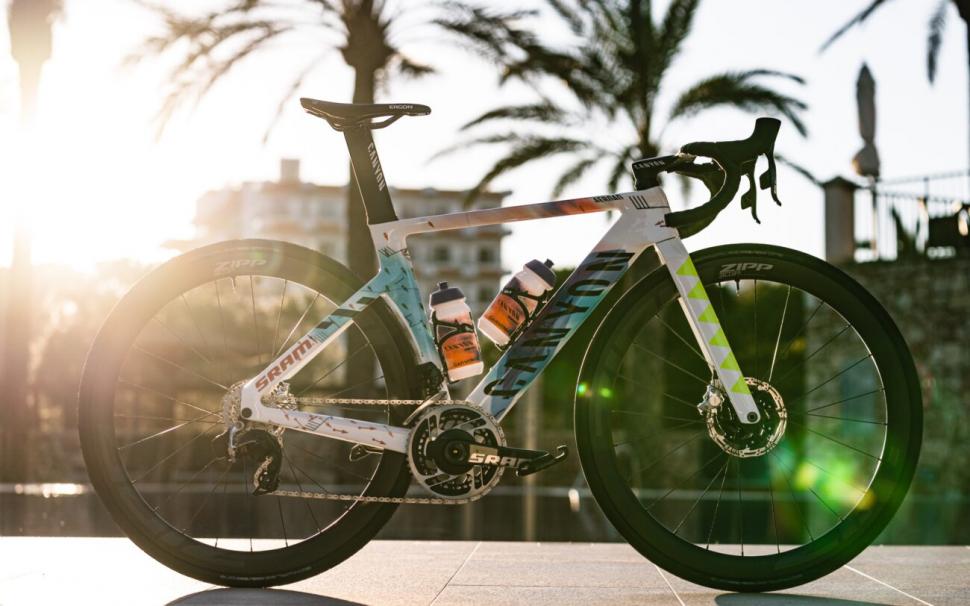 As you can probably guess by the name of the team, Canyon SRAM are racing on Canyon frames with SRAM groupsets. More specifically, the Aeroad CFR Disc frame and SRAM Red eTap AXS groupset, which comes with a power meter built in.

The frame is a colourful mix of blues, pinks and yellow, along with the combination of geometric shapes and fades.

The team will switch between Zipp’s 454 NSW and 303 Firecrest tubeless wheelsets when racing, and these are wrapped in Schwalbe Pro One TLE tyres, with widths between 25mm to 30mm choose from. Time XPRO 10 or Time XPRO 15 pedals will also be used and Ergon’s SR Pro Women’s saddle is specced. Also riding Canyons are the women’s Movistar Team, who’ll be racing on black and blue versions of the Aeroad CRF Disc.

The bike is similarly built up with SRAM’s Red eTap AXS groupset with Quarq’s power meter, but the Zipp 303 NSW wheels are instead paired with Continental's Competition Pro LTD 25mm tyres, and Look Keo Blade Carbon Ti pedals are fitted. Fizik is supplying its Antares Versus Evo 00 saddle. 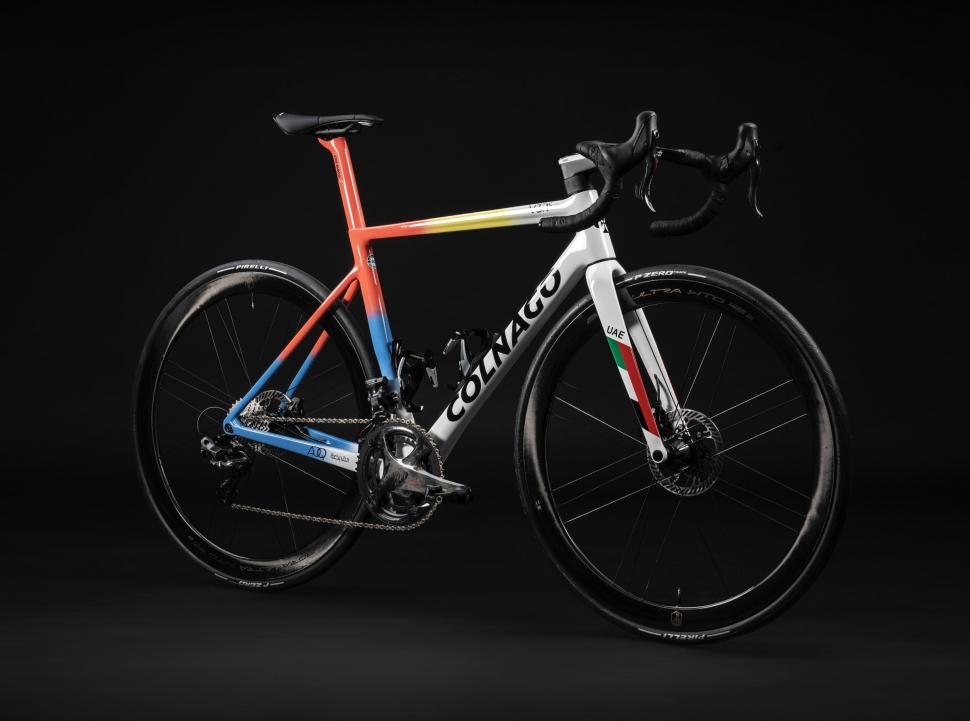 UAE has a women’s team for the first time this season, with the new outfit taking over from Alé-BTC-Ljubjana and keeping on riders including former world champion Marta Bastianelli, and the Spanish national champion Mavi Garcia.

That slick-looking bike is Colnago’s V3Rs which strikes a well-judged balance between being a lightweight climber and an aero machine. Colnago also says its ability to absorb vertical shocks has improved significantly since the previous V2-r iteration, which translates into greater comfort.

This bike has been kitted out with Campagnolo’s Super Record EPS groupset along with the Bora WTO wheels. Pirelli supplies the P Zero Race tyres and Prologo the saddle. 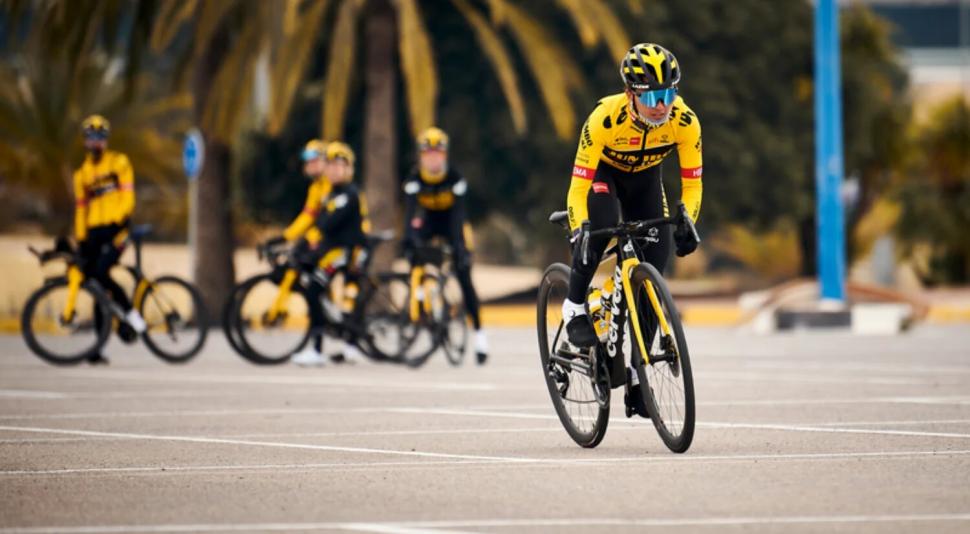 This year the women’s side of the squad takes the step up from UCI Continental to the WorldTour status, truly matching its calibre of riders with multiple world champion Marianne Vos part of the line-up. Also, look out for British rider Anna Henderson racing in bright yellow.

The Cervélo R5 disc brake bike is the climbing machine for days with lots of elevation gain. The new frame was officially unveiled last September and is much lighter than before - it’s claimed to be 16% lighter than previously. Cables are also now fully internal, plus the ride is said to be more comfortable than previously, particularly at the front end, and you can fit tyres up to 34mm wide.

Then there’s the fast and sleek Cérvelo S5, with its interesting V-shaped stem, which is for flat and not-too-hilly races.

The wheels and groupset for both bikes are supplied by Shimano, while Vittoria and Fizik are supplying the tyres and saddles respectively. 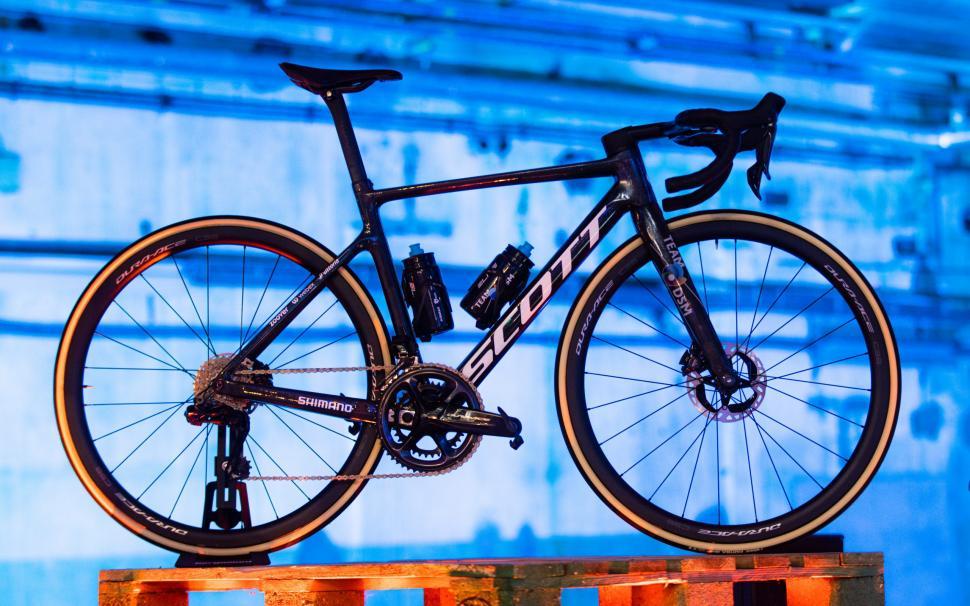 The German outfit, known a couple of seasons ago as Team Sunweb, have the bikes kitted out with Shimano Dura-Ace Di2 groupsets, Dura-Ace C38 wheels and pedals, along with PRO saddles. The team also rolls on Vittoria’s Corsa tubeless tyres.

21-year-old British young hope Pfeiffer Georgi remains part of the line-up, alongside Germany's classics rider Liane Lippert, and Dutch sprinter Lorena Wiebes who signed a four-year deal to stay with the team up until 2024. 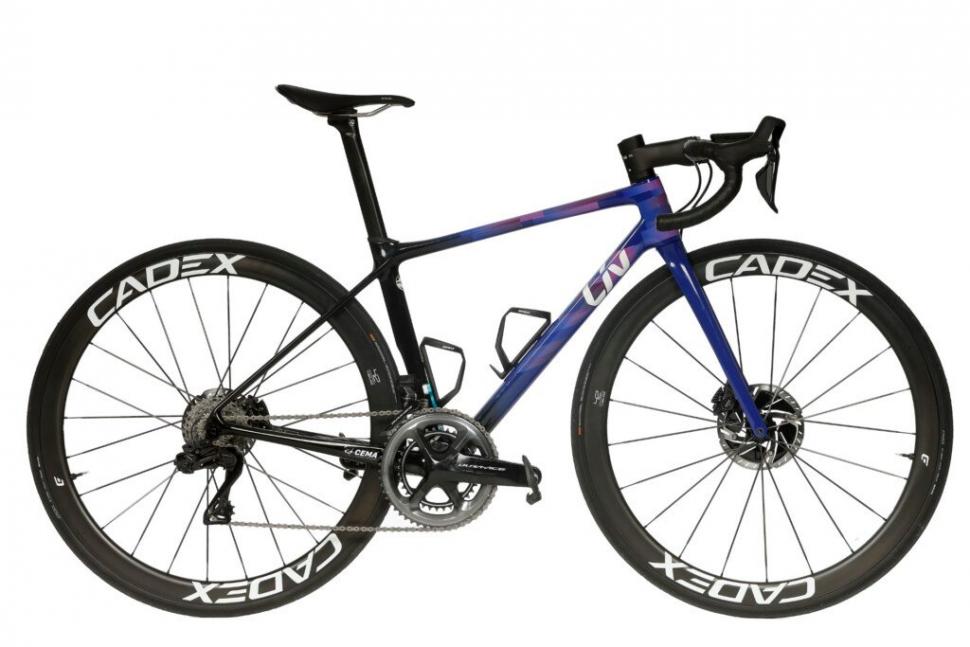 The only riders in the men’s World Tour to be getting new bikes are those on the Australian Bike-Exchange Jayco team. Gone are those lovely celeste Bianchis and in come Giant, who are back in at the highest level of racing after an absence last season.

For the women’s side of the team, they’ll be getting women-specific bikes from Liv, Giant's sister brand.

The riders will be on the recently revamped all-rounder Langma Advanced Disc SL, which now incorporates more truncated ellipse tubing for an improved aero performance, has increased lateral stiffness for responsiveness and is lighter than previously too. 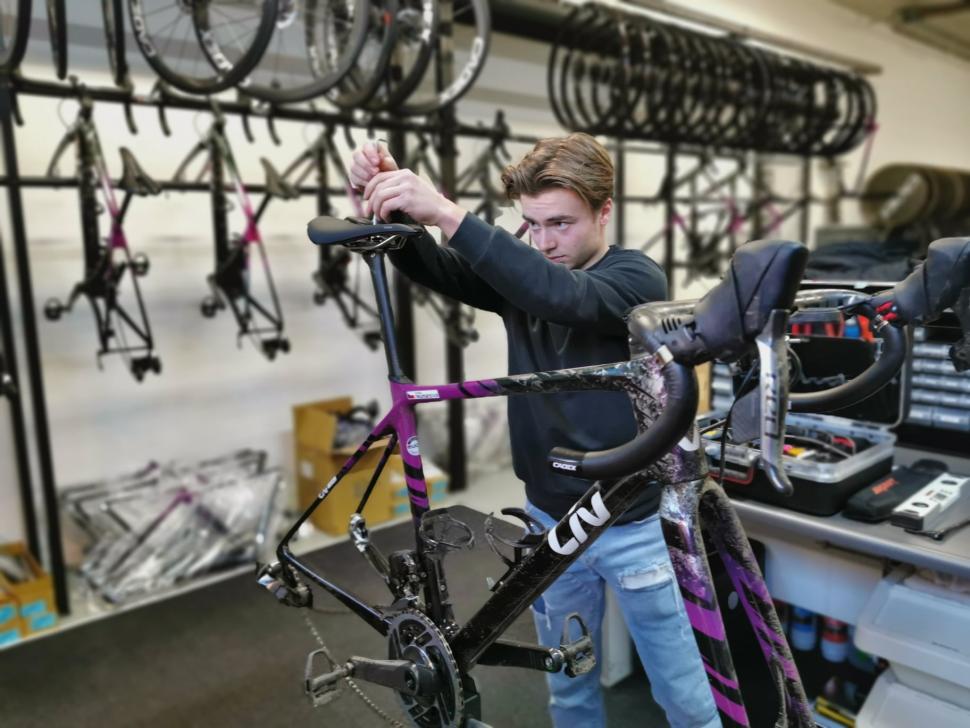 BikeExchange Jayco ladies aren’t the only ones on Liv’s bikes, as Liv Racing Xstra are of course aboard the Langma too. The paintjobs aren’t too dissimilar either.

Both are purple, although the shade of the Liv Racing Xstra version is much more a pinky purple, whereas the BikeExchange Jayco seems to lean more towards blue in places.

CADEX supply the wheels for Liv Racing Xstra too, but the team are running the SRAM Red eTap AXS groupset.

Look has made it into the WorldTour this year, with the riders in the first Swiss outfit in the women’s WorldTour switching between the aero 795 Blade and the climber’s 795 Huez RS. Look will also be supplying its Keo Blade Carbon Ti pedals.

The Look bikes are equipped with Campagnolo’s Super Record EPS groupset and roll on wheels from another french brand, Corima.

Which one is your favourite? Let us know in the comments as always.