Cyclists entering sportives will next year have a way of judging their relative degrees of difficulty – at least, the ones registered with British Cycling – with the governing body today announcing British Cycling Grading (BCG), which will be based on a 1 to 5 scale of difficulty.

The scale, devised with the help of Marie Curie Etape Series organisers IMG Challenger World will allow prospective entrants to gauge the scale of the challenge facing them and compare events against one another.

It adds that it will also prove beneficial for organisers when planning routes aimed at cyclists of differing abilities, reflecting the fact that many sportives have a tougher, longer course and an easier, shorter one.
According to British Cycling:

BCG calculates the difficulty of the sportive by analysing the distance of the event and the total elevation. Both parameters can be taken from any GPS plot. Events are then graded on a scale of one to five, or against a descriptive scale – e.g. “moderate” or “challenging.”

When two events fall in the same bracket, BCG allows users to compare events more accurately, using a more detailed rating. Calculated using the same combination of total distance and ascent, the BCG score delivers a detailed breakdown of where all Graded events sit relative to one another.

It adds that BCG will be rolled out to all events in the 2014 season, and that icons will appear on the event listings on its website to denote the event’s grading.

More information about the system and how it works is available on the British Cycling website, which also shows how distance and climb combine to produce that grading – yellow denotes 1, up to red which equates to 5.

British Cycling says that the table “shows the relationship between the distance of the sportive and climbing. The five colour bands are represented, along with a more detailed British Cycling Grading score. Sportives are graded from two to 787, calculated on distance and ascent.” 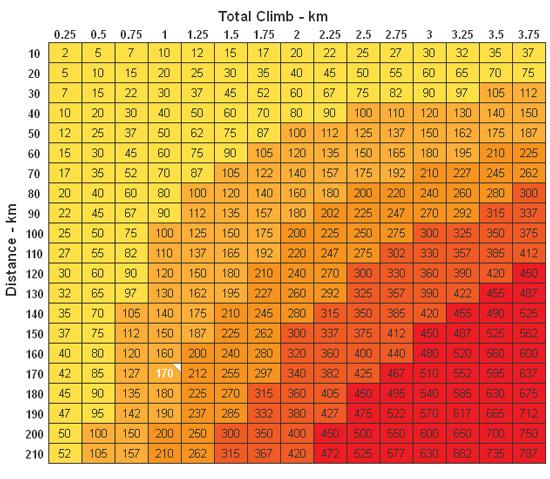 The organisation’s Cycle Sport Events Manager, Jonathan Day, commented: “We are delighted to get this system up and running for 2014.

“We want everybody entering sportives to enjoy the experience and by providing an easy to understand grading system riders will be better informed about the physical demands of the events they enter.

“It will also help organisers to promote and publicise their events to the right audience so we’re very confident that British Cycling Grading can have a very positive and significant impact on the ever-growing sportive scene.”

Cyclosport, the event listings website, has been providing rankings of degree of difficulty of various sportives, including many registered with British Cycling, for several years.

It uses a scale of 1 to 10 based on the organiser’s perception of the difficulty of the course, so unlike the British Cycling system events may not be directly comparable.