A steel touring bike in an £1,800 build
by Rob Simmonds

Back in December, I went up to Hewitt Cycles in Leyland for a bike fitting and I'll be testing two bikes off the back of that. The first one, a Cheviot SE tourer, has arrived in Devon for extensive testing. The Cheviot SE is a traditional steel-framed touring bike, albeit with some modern touches, like the sloping top-tube. It's an off-the-peg frame but Hewitt also sell a fully custom version, the Grampian, should you wish. The standard build costs £1,599 but the version I'll be testing has a few upgrades and comes in at £1,805. 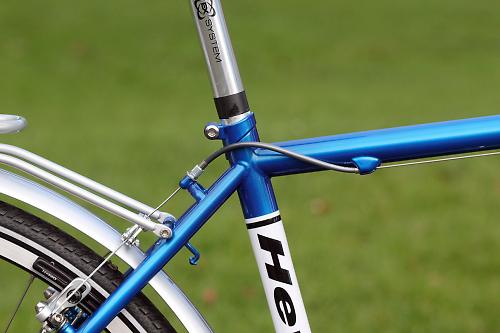 The frame is made from Reynolds 725 tubing – no funny profiles here, all the tubes are pleasingly round. Hewitt have their off-the-peg frames made in Taiwan – hopefully we're well past the days when people looked down their noses at Far Eastern craftsmanship as it's beautifully finished, with very tidy TIG welded joints. There are three sets of bottle bosses, pump pegs (on the off-side seatstay) and some really lovely polished stainless steel dropouts. There also are proper brazed-on cable guides to protect the head tube which are always nice to see.

The fork is steel, this time in 631, with a traditional curve, low-rider mounts and a dynamo mounting tab. The test bike has an upgraded paint job, with white panels on the seat tube and down tube – that's an extra £80 but it does look very smart. It may be a small thing, but the colour is described as 'Anquetil Blue'. I have no idea if dark blue was Maitre Jacques' favourite colour, but it made me smile. If I have a single criticism before the testing starts it's that the short head tube inevitably means a rather inelegant stack of spacers. The extra long steerer tube does allow plenty of flexibility when setting up the bike, but it's not pretty. It's only an aesthetic consideration though and the inch of spacer sitting on top of the stem could easily be dispensed with if this was actually my bike (they all go back, you know). As it's going to be sold as 'ex-demonstrator' it seems reasonable to leave some wiggle room to accommodate a prospective purchaser. The 9-speed drivetrain is a tried and tested mix of Shimano Deore bits – a 22/32/44 chainset, Hollowtech bottom bracket, long-cage XT rear mech and an enormous 11-34 SLX cassette, which gives a bottom gear lower than an ant's kneecaps – 17.5in to be precise (they must have some big ants in Devon – Ed). It's a setup that well suits a bike which is designed for fully-loaded touring. 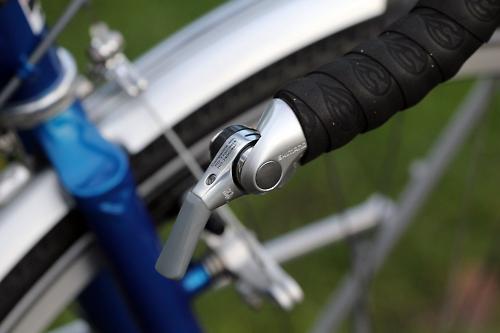 I've opted for Dura-Ace bar end shifters because there's something immensely satisfying about clunking through the gears and it's easy to change several in a single shift. Braking is taken care of by Tektro 720 cantis working from Cane Creek levers. They're wide and strong and so far I've been impressed by the performance they offer (okay, I've already taken it for a spin around the block a couple of times). 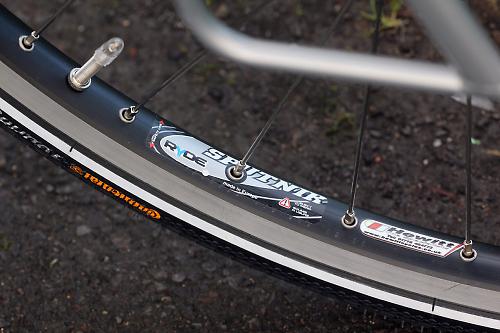 Hewitt are known for their wheels (if they're good enough for Bradley....) and the Cheviot comes with a handbuilt pair – Ryde Sputnik rims laced to Deore XT hubs with DT spokes on the front, and a mixture of DT and Sapim spokes on the back. Tyres are Conti Touring Plus Reflex in a 32c flavour but the frame will accommodate fatter rubber if you wish. 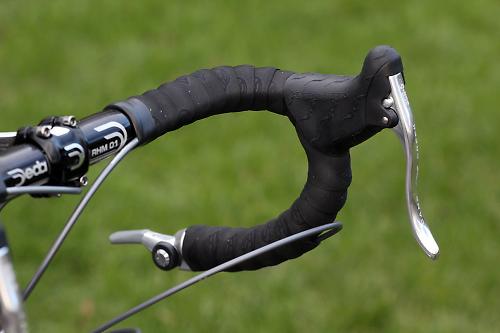 The finishing kit can be mixed up to suit but I've gone with pretty much the stock set-up. Deda compact bars are wrapped in Cinelli Gel bar tape (my personal favourite) and attached to a Deda stem. The seatpost is an alloy System EX and the mudguards are SKS P45s. None of the kit is particularly exotic, but it's all solid, reliable and well-proven stuff. 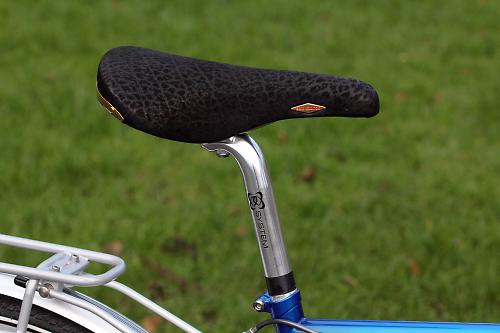 I've chosen a San Marco Rolls instead of my usual Brooks. It's a tourists' favourite but not a saddle I've tried before. The leather cover also looks like the crust on tiger bread and small things like that always please me. 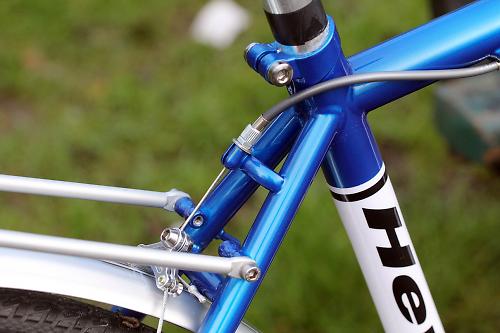 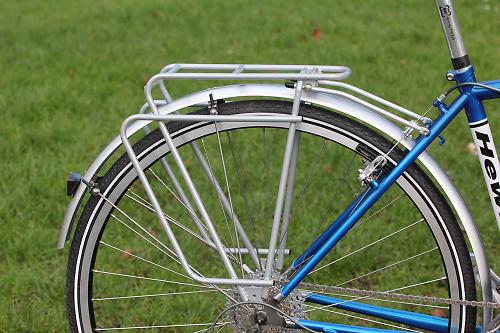 Paul Hewitt was at pains to stress that this is a touring bike and should be reviewed as such. That's fair enough (and I will be taking it on some fully-loaded adventures) but I'd bet that plenty of Cheviots also spend time commuting, shopping and hunting out cake shops, which is what this one will be doing a lot of the time. It's a serious tourer, but it's also one of those practical do-almost-anything kind of bikes. It might even be coming on an audax or two, where it can keep my mate Lizzy's Cheviot company. Although the Cheviot is an off-the-peg frame, I've been fully measured up by Paul and there's no reason why it shouldn't fit perfectly. So far I've been riding it with my own 'feels about right' set-up, which does feel very comfortable, but I'll be breaking out the tape measure and setting it to Paul's measurements for the bulk of the test. Full report to follow, once I've given it a jolly good going over. If you've got any comments or questions, stick 'em below the line and I'll try to find answers during the test period.

In the meantime, head over to www.hewittcycles.co.uk for more details on the range.