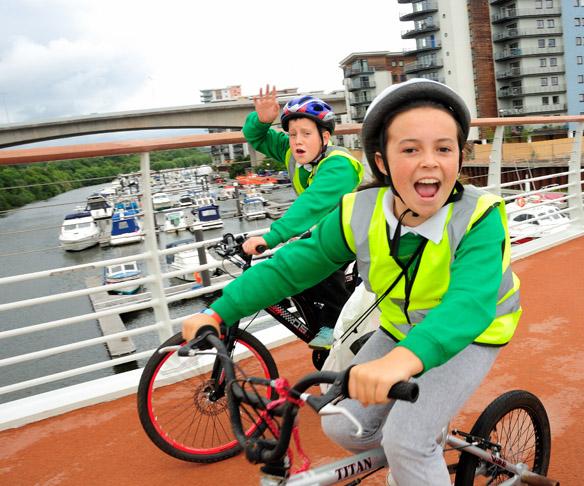 A report published today by a Parliamentary commission urges the government to bring a halt to a growing “physical inactivity epidemic” that costs the UK an estimated £20 billion a year – and calls for dedicated funding to make walking and cycling “regular daily transport.”

Called Tackling Physical Inactivity— A Coordinated Approach and delivered to Number 10 Downing Street this morning, the report has been published by the All-Party Commission on Physical Activity.

The first of two reports that the commission will produce, it seeks to identify the extent of the issue and identifies areas where change is needed to tackle the problem.

It says that a cross-sector and cross-departmental National Action Plan should be drawn up and calls for support for it from the leaders of all three main political parties.

The report says the government should “re-focus transport strategy over time, to provide long-term continuity of resources to incentivise and facilitate walking and cycling as regular daily transport.”

It also calls for “existing and planned new developments and infrastructure to be ‘health-checked’ to ensure that walking, cycling, active recreation and other forms of physical activity are prioritised.”

Raise awareness by implementing a public health campaign focused on the benefits of physical activity.

Track progress by developing and introducing a standardised measure of physical activity across the UK, and standardised evaluation of investments.

Ensure local and national policy supports the design of physical activity back into everyday life through active travel and leisure (such as walking and cycling to school or work) and making ‘active workplaces’ the norm.

According to Baroness Grey-Thompson, “The threat that obesity poses to our society cannot be under-estimated.  I am delighted that the different sectors who can effect a change in this area have come together to give evidence, and with their guidance I hope that we can raise awareness of the importance of physical activity and start work on helping to eradicate the obesity epidemic.”

Dr Huppert commented: “Inactivity poses huge problems for our health, and yet far too many of us do very little physical activity, if any. It’s not about being a top sportsperson, it’s about doing something regularly – something we can all manage.

“We can all walk or cycle more often, find time to go for a swim or a jog, or join a local sports club. It’s not hard and it does matter.

“Otherwise, we will continue to face growing obesity levels, more diabetes and other illnesses, worsening our health and how we will be able to live our lives when we are older. It also costs the country a huge amount of money!

“We should all make sure that we are physically active, and that our children are too.”

Among sports stars lending their support to the report is former world road champion Mark Cavendish, who in an article published by The Sun [£] yesterday called on parents to take their children to the park rather than letting them sit at home playing computer games.

Double Olympic champion Lord Coe, who was chair of the London 2012 organising committee, gave evidence to the commission and writing in The Daily Telegraph today gave a stark warning of the consequences of failing to address the issue.

He wrote: “Today’s children are the least active generation in history.

"They also might be the first generation to have a shorter life expectancy than their parents.

“That’s not progress, that’s moving backwards, and physical inactivity may be a bigger culprit than we think.”

Lord Coe went on: “The price we pay is high. Inactive children don’t perform as well in school and are less likely to go to university.

“As they reach their adult years, they won’t be as happy, healthy or productive as they would be if they had played during childhood.”

Remaining active in adulthood also has benefits and not purely physical ones – last week, we reported on a a study that found that people who regularly take part in activities such as cycling or running while aged in their 20s have a better memory once they reach their 40s or 50s, and may be at lower risk of dementia.

Today’s report also has the backing of organisations including the sustainable transport charity Sustrans as well as the FA Premier League, the Lawn Tennis Association, the British Heart Foundation, The Young Foundation and sportswear giant, Nike.

Malcolm Shepherd, chief executive of Sustrans, said: “The easiest and single most effective way of increasing physical activity is to transform our daily journeys to school, work or leisure into active journeys by walking or cycling.

“Making the public realm welcoming for walking and cycling is the key to increasing physical activity. This means simple things such as better pavements and cycle lanes, lower speeds and a public commitment to funding for active travel.”