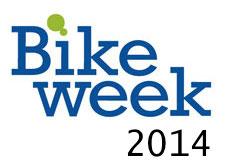 Bike Week 2014, the UK’s national cycling celebration, starts this Saturday. We’ve picked a few events that have caught our eye, you can also check out what’s going on near you through the Bike Week website.

From June 14 until June 22, experienced and beginner cyclists alike will be saddling up, riding bikes and taking part in all sorts of cycling-oriented events and excursions.

The week-long cycling festival is set to reach every corner of the country, highlighting the social, environmental and health benefits that come with riding bikes and encouraging everyone to welcome bicycles into their everyday lives.

There are 901 officially registered events on the Bike Week website, but with so much going on, how do you chose where to go and what to do?

Well, the Bike Week 2014 events page is home to a handy map widget which pins every registered event onto a map so you can easily spot what’s going on near you.

The event has been around for some time. The organisers, national cycling charity CTC, started Bike Week in 1923 under their former moniker the Cyclists Touring Club.

Today, CTC is one of a number of the event’s backers, including national governing body British Cycling, sustainable transport charity Sustrans, and cycling levy Bike Hub.

We’ve also had a scan of the what’s-going-on list, and come up with a fancy sprinkling of events from around the country.

Scotland
One of the northernmost registered Bike Week events is set to take place in Huntly, Aberdeenshire, on June 21.

The Huntly Bike Week, which overlaps with the national Bike Week for it’s launch day on the 21st, is put on by volunteers in the local community who, in the spirit of Bike Week, just want to encourage others to get on their bikes.

Wales
The Cardiff Commuter Challenge, run by the Cardiff Cycling Campaign, will be getting underway on June 16 from 08:00 until 09:30.

Teams of commuters, travelling by bicycle, bus, car and train, will be making timed commutes from UHW, Llandaff North, Victoria Park, Ice Rink and Willows High to the City Centre to test the efficiency of each mode of transport.

Northern Ireland
The Pedalling Picnic on the North Coast, organised by Coleraine Borough Council, has been pencilled in for June 15. Bring refreshments or a whole picnic between 14:45 and 17:00 to enjoy the beautiful coastal scenery on the National Cycle Network Route from Coleraine to Downhill with other cyclists.

South West
On June 18, social-enterprise appliance and furniture store, RE:SOURCE, in the Cornish town of Bodmin, is teaming up with Sustrans, to run a free basic maintenance course for cyclists.

The aim of the game is to get as many people in the region back on their bikes, safely. The session will take place at 8 am at the RE:SOURCE store on Launceston Road, Bodmin, PL31 2RJ. Spaces are limited, so call ahead to make sure you’ve got a place.

South East
The Go Dunstable! cycling festival is a family-oriented cycling event that is set to take place on June 14. Fun for all the family is in store, from death-defying stunt cycling through to fabulous fitness routines.

London
Among many, many other naked bike rides set to take place this month. The London World Naked Bike Ride, starting at Tower Hill on June 14, is set to be the biggest in the country.

The event is billed as a protest, with anything from cycle safety to oil dependence and saving the planet on the agenda.

Midlands
On just four bicycles, The Handlebards, a four man drama troupe, are set to visit Leicester on June 17 and put on two of Shakespeare’s most famous plays.

The troupe will carry all their gear for the show: set, props, costumes and camping equipment, from gig to gig as they take their performances of Macbeth and The Comedy Of Errors around the country and on to Europe.

North West
As part of the Annual Cycling Event in Manchester, a post-event social at a pub in Manchester will play host to a scientific presentation entitled Bikes and Beers - Cycles and Cordials.

The presentation is set to take place at the Old Abbey Inn, Pencroft Way, Manchester, M15 6AY, from 16:30 - 20:00 and is based around work that the Manchester Cycling Lab has been doing over the last year to study cycling in the city.

As well as a free bike check, free maps and all sorts of free advice on cycling, the UTravelActive project, which promotes active transport for students and lecturers at Universities around the country in association with Sustrans, will have a smoothie maker hooked up to a bike.