We poke around Chris Froome's new Team Sky Pinarello F8 - a bike to win the Tour de France on?
by David Arthur @davearthur

Could this Pinarello Dogma F8 be the bike that crosses the line first in Paris? Well it probably won’t be this one if Chris Froome does win, it’ll be a yellow version. This bike though is one of three identical machines that may earn him that yellow bike - rivals, form, and crashes permitting. This is his number two bike - he was out riding his number one bike at the time we swung by the Sky team hotel last week. 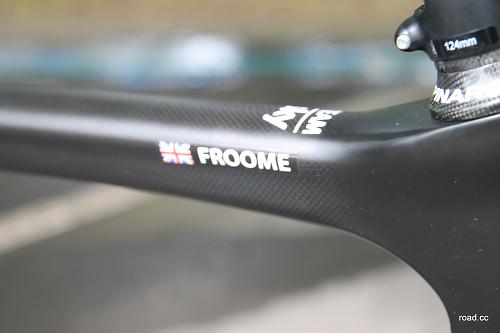 So why's the new F8 better than the old 65.1 Think - apart from having a less daft name? Well according to Pinarello it's their lightest bike ever and their first aero road bike (something widely predicted - including by us. The key stats are it's:
• 12% stiffer
• 16% more balanced
• 47% less aerodynamic impact
• 120g lighter for frame and fork (size 54)

than the model it replaces. For a full run down you can read our first look article  on the new bike from earlier in the year. that the Italian company claims is their lightest ever offering. It’s also their first aero road bike, fulfilling our prediction earlier this year that Pinarello would launch an aero road bike. 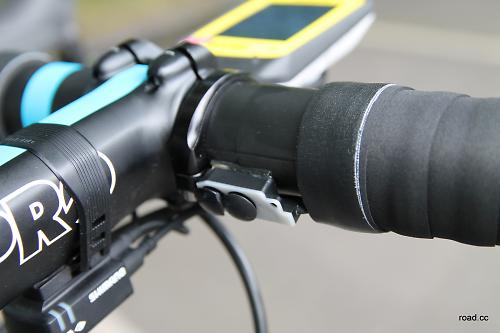 So let's have a look at the set up in more detail. The first thing to catch our eye was an example of mechanical creativity from the team mechanics. Here they’ve stripped out the internals of an optional Di2 R600 Climbing Shifter and stuck, using double-sided tape, to the handlebars, obviously in an effort to save a few grams. Very much in keeping with Team Sky's marginal gains and all that philosophy… These days mechanics rarely get the chance to get creative, not like they did back in the day drilling holes, sticking bits of velcro everwhere (velcro was only two years ago - ed). 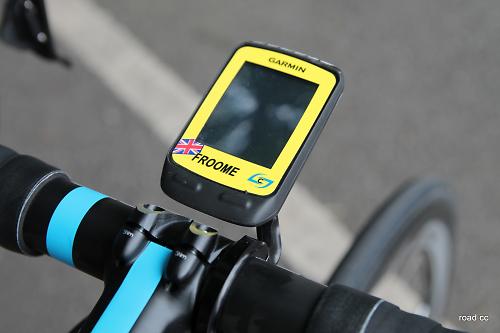 Like the rest of Team Sky, Froome's bike is equipped with the latest Shimano Dura-Ace Di2 11-speed groupset. Froome however uses non-round chainrings, they look like Osymetric chainrings, which must slightly annoy Shimano because it’s not quite on message. Osymetric chainrings do seem to be favoured by a number of Team Sky riders, at previous Tours we've spotted them on the bikes of Sir Bradley Wiggins and Richie Porte - Bobby Julich was the first pro rider to use them in 2004 he later went on to briefly become race coach at Team Sky which may help explain their popularity with some of their riders. 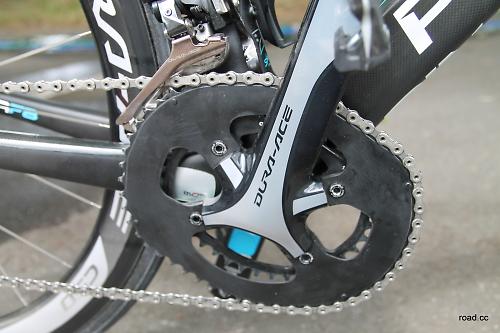 Froome uses a 52/38 pairing. The idea is that the 52 gives you the equivalent of a 56 at the top of the stroke when you're putting the power in, and a 48 at the bottom making it easier to spin back up to the high point. The accepted formula for working out the gear ratio is to subtract four from the chainring size - which makes Froome's set up equivalent to a 48/34 - so he's a spinner then, but of course it's not qutie that simple. 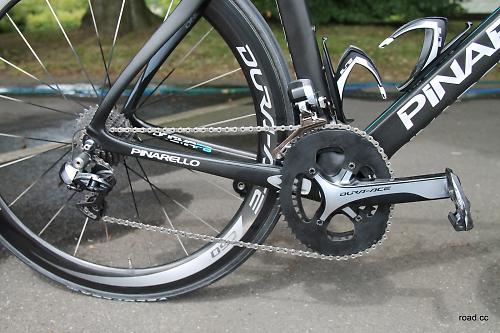 At the back end of the drivetrain is an 11-28 cassette with a standard Dura-Ace rear mech, as it has the capacity for up to 28t cassettes. The slightly surprising thing here is that at first sight such a wide gear range is rather more standard than you might expect to find on a top end race bike. 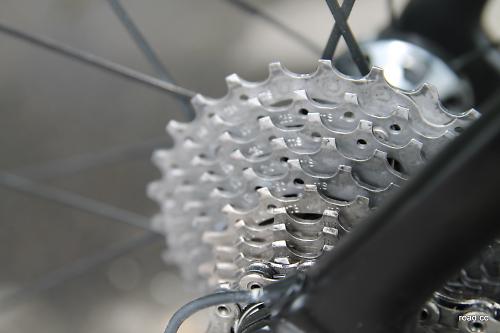 The Team Sky mechanic told us the whole team have been riding 11-28 cassettes for most of the season, since they got the F8s - they rode them right the way through the Dauphine and they'll be riding them for the entire Tour. In the past riders would have ridden 11-23 or 11-25 cassettes and swapped to a wider range cassette only for the mountain stages, but Team Sky have moved away from this approach - the riders are comfortable with the combination of the bike and gearing combination in all situations so they're sticking with it. Thinking it through of course this is a real benefit of running an 11-spd groupset. It certainly makes life easier for the mechanics. 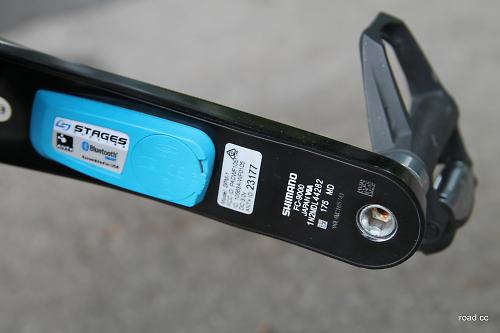 Team Sky are sponsored by Stages so it would have been a real surpise if Froome's bike came fitted with anything other than the Stages power meter - fitted to the non-driveside crank arm, as do all the other team bikes. Sitting in the K-Edge handlebar mount is a Garmin Edge 510 with a unique yellow finish and Union Jack flag decoration. Nice. 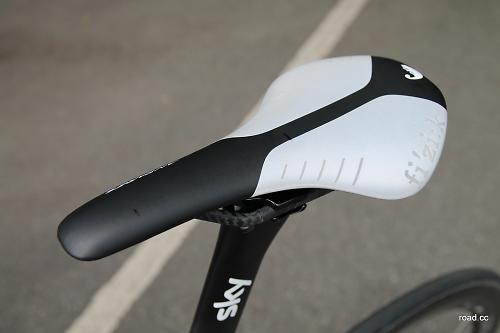 Saddle of choice for Chris Froome is the latest versin of the Fizik Antares - which makes him a chameleon - in Fizik's zoomorphic fitting guide. So he's not as flexible as a snake - Bradley Wiggins, but he's more flexible than a bull - Philippe Gilbert. Peter Sagan and David Millar are Arione riders too. (Worth noting that roadcc ed, Tony is about as flexible as a piece of 2 inch ply and he's been riding a snakey Arione for years.) As you'd expct Froome has the top model Arione with carbon braided rails. He has it mounted quite far back on the rails to get his desired position. 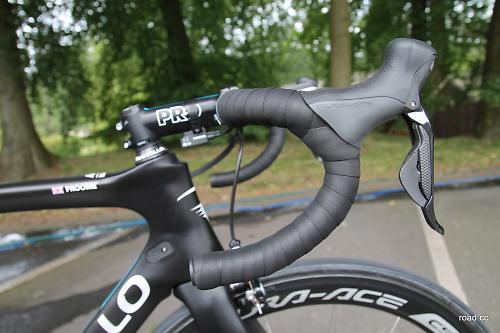 The aluminum PRO stem is 124mm finished with the trademark Team Sky blue stripe. There's a matching blue stripe on the aluminium PRO Vibe handlebar, with a compact shape, as well. He has one spacer between the stem and headset top cap, and one above the stem. You might expect that he'd go for an all carbon set up or alu stem and carbon bars. Sprinters (and any other rider looking for a super-stiff get the power down setup) often go for a  carbon stem and alu bar combo - that was Mark Cavendish's desidred set up - in fact he designed a bar stem combo with Shimano when he was riding for HTC Highroad. 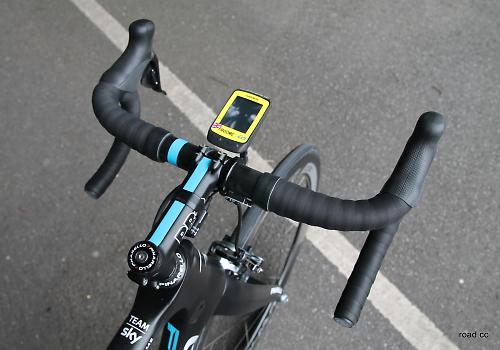 In Froome's case we're guessing he wants something durable and reasonably stiff, with a comfortable bend and that the Vibe fits the bill. For added comfort there was a good thick etra layer of tape on the drops for those long hours he likes to spend looking at his stem. 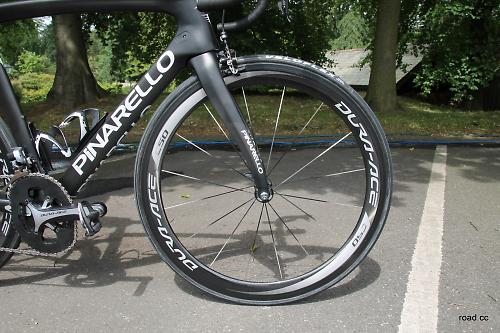 All of the team are riding the 50mm deep section Shimano C50 carbon fibre wheels with Veloflex Carbon 23.5mm tyres glued to them. A pair of Elite Custom Race plastic cages complete his build. 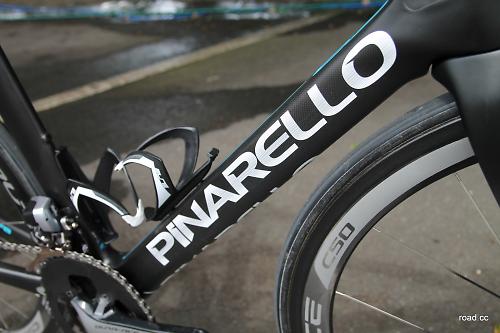 Now, we didn't have our scales to hand, but the team mechanic did tell us that with the C50 wheels fitted here the bike is right on the 6.8kg UCI weight limit. With a pair of the lighter C24 wheels in place he reckons the bike is under the weight limit. We're presuming then that the team aren't resorting to lead weights in the bottom bracket like some teams are.