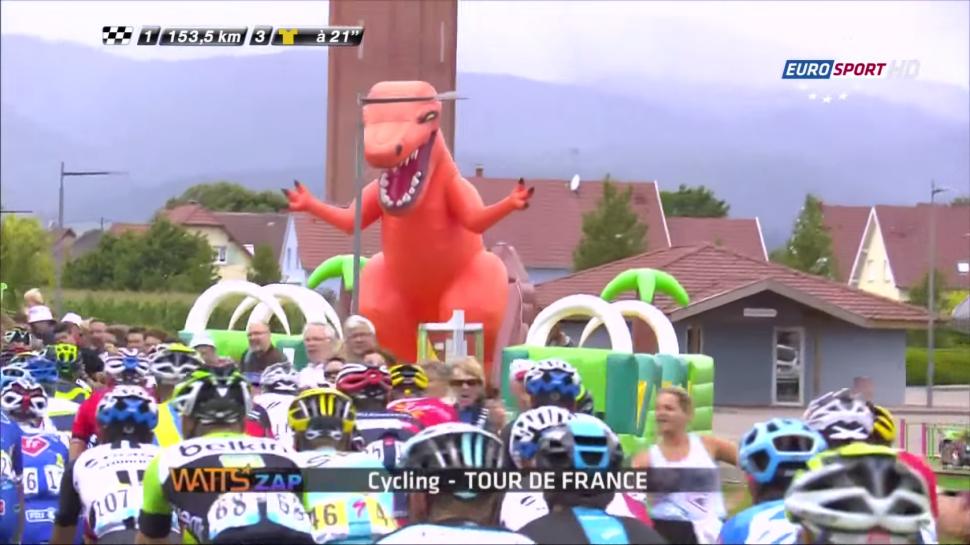 This week we're bringing you a bumper edition of the road.cc cycling video round-up.

For your viewing pleasure we've got the best of the high jinks from this year's Tour de France via Eurosport's Watts Zap programme. It may be a long watch, but it's absolutely fantastic.

The rest of the round-up follows in brutally funny fashion. There's some more racing madness on the post-Tour cycling scene - mental weather, mental riders and quite a hairy crash - we've got a fella riding a stage of the Tour in his basement, another who's planning on riding the length of South America in record time, an unco-ordinated burglar, and all of the things that make Copenhagen a cyclist's paradise.

The summer feels like it’s waning, and this year’s Tour de France is becoming nothing more than a distant memory.

Fortunately, sports broadcaster Eurosport’s signature sporting antics show Watts Zapp is here to drag that memory right back into the present with an excellently soundtracked series of clips.

Okay, now that Watts Zapp video is out of the way, we can stop living in the glorious summer haze of the Tour de France.

One race that began with not so much as a whiff of summer was the Tour de Pologne, which suffered from quite a devastating hailstorm on its very first stage. Check outhow the riders managed as they were battered with hailstones and wind so strong it took down trees.

Down in Portugal things weren’t any less violent. The weather was better, yes, but the riders were somewhat more tempestuous.

Following a collision between Spaniard Vicente de Mateus and Italian Enrico Rossi on the sixth stage of the Volta a Portugal, both riders engaged in a fistfight.

Rossi explained the situation to Danish television channel TV2 at the end of the stage. He said: “[de Mateus] stood and shouted at me so I hit him.” Sounds fair enough to us.

Completing our segment of spectacularly brutal professional racing videos, we’ve got an impact from the Tour of Utah that you’ll want to watch over, and over again.

Fortunately for you morbid lot, this video comes in Vine format, which means it’ll loop its juicy content around and around automatically.

The poor victim of this crash was Gavin Marmion, who can thank a pole used to help snow ploughs locate the edge of the road for his bruises.

For us amateur, unfit, or just plain talentless riders, our cycling careers lie a long way away from the professional peloton. We’re condemned to play out our fantasies on Sunday morning club rides, lonely commutes, and hours on the turbo trainer.

While these sustain our love for cycling, they will never quite match the high octane nature of professional racing. But what if you could change that?

Here nutrition supplement business GNC, a man named Frank, and a couple of his mates recreate a stage of the Tour de France in a basement using a turbo trainer, various boxes and blocks, an array of fans and a couple of water guns. They call their masterpiece the Tour de Basement. Inspired.

Race to the World's End

Race to the World's End from Jonny Pickup on Vimeo.

Meet Ed Pickup. This 23-year old British adventurer and long-distance cyclist is preparing to break the world record for cycling the length of South America unsupported, which currently stands at 60 days.

This is the trailer for the record attempt in which Pickup will tackle 500,000 ft of climbing in under 40 days, or so he hopes.

Hilly Billy Roubaix from In The Crosshairs on Vimeo.

A few hundred miles north of where Mr Pickup's record attempt starts, there's a yearly race which isn't for the faint of heart.

The Hilly Billy Roubaix is held in West Virginia and this short documentary will give you a real feel for the event which seems to capture the soul of the American midwest cycling scene.

Man breaks into house, steals bike, forgets how to ride bike, falls off spectacularly, runs away.

This video really is as simple as that. The police are still on the lookout for this Houston-based burglar who clearly has co-ordination issues.

Journey Around Copenhagen's Latest Bicycle Innovations! from STREETFILMS on Vimeo.

Finally, we’ll move from one man who clearly can’t ride a bike to thousands who can and are supported by the safety of the excellent cycling infrastructure in Copenhagen.

The Danish city is renowned for its excellent cycling facilities, but do you know how and why it’s regarded as one of the best cities for cycling in the world?

Meet Mikael Collville-Andersen, the CEO and chief social mobility innovator and advocate of the Copenhagenize Design Company. He'll show you some of the excellent cycling innovations that have come into place recently - and others soon to be put into place - in the Danish capital.