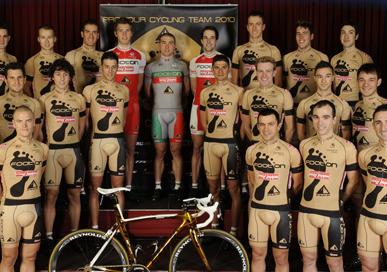 Team Sky’s glitzy launch in London last week is likely to be talked about for a long time to come, this weekend fellow ProTour team Footon-Servetto-Fuji similarly staged a launch that is likely to linger long in the memories of those who attended, albeit for different reasons.

The English version of the team’s website described the launch, which took place in the Hoznaya, Cantabria, as “astonishing” – perhaps not the best choice of translation from the original Spanish, but one that in the circumstances seems entirely appropriate.

Seemingly taking its inspiration from the movies The Italian Job, The Mask of Zorro and The Full Monty – bear with us, it will all become clear – proceedings got under way before an audience numbered in the hundreds with the showing of a short film, Cycling Transporter, which had champion rally driver Dani Sordo showing off his driving skills as he led a gang attempting to hijack an armoured car apparently laden with gold.

Making good its escape, the armoured van was then shown arriving outside the hotel where the team’s launch was taking place, at which stage the riders, dressed in black skinsuits and capes, appeared on stage escorting the van’s cargo – which turned out to be nothing less than the team’s 2010 bike, which adopts a rather blingtastic gold, white and black colour scheme.

The best was yet to come, however. Cycling, as we all know, is a sport prone to the odd fashion disaster. That shirt that looked so good on a tanned and fit rider in fully co-ordinating team kit during the Tour de France may not look so great after you’ve gone out and bought it and worn it with mismatched shorts, socks, helmet and mitts and then hopped onto a bike of yet another colour.

And while weekend warriors may be forgiven for the odd fashion faux-pas, every few years, a pro team itself comes out with a new kit that almost defies description. Last night, Footon-Servetto-Fuji was that team.

Officially, the colour scheme, dreamt up by the artist Dario Urzay, is described as gold and black, but the former seems much closer to – how shall we put this – fleshtone. And the main motif on the shirt is a large, black footprint. All of which means that any rider wearing the kit looks like a giant has discovered them in the altogether and, outraged, has decided to stamp on them. With the foot he's just dipped in a big pool of black ink.

It could be that the lighting at the launch venue gives an unfavourable impression of the kit, or that once the season gets going and the riders are able to start working a bit more on their cyclist tans, it won’t look so much that they are fitter-than-average members of a naked bike ride, especially come the Team Time rial that kicks off this year's Vuelta in Seville.