While we were at Zyro's open house event this week we had the opportunity to meet Wayne from Ashima, who showed us his hydraulic road brake concept. It's currently just a work in progress with most of the working parts modelled in plastic but Ashima seem fairly committed to launching it next year. You might well be asking yourself how (and why...) at this point, so here's what we learnt.

"People were asking us to make an ultralight brake for the road market", Wayne told us. "There's plenty of companies out there making them but none of them are that good in terms of performance – on the rig you can see them bending under the brake load. The only way I could compete with a brake that worked as well as a standard brake was to change the game".

And change the game he did. The technology for the brake actuation is borrowed from Ashima's pancake disc brake, which does away with a piston entirely and instead uses a diaphragm to apply the pressure. In this case it's a much smaller, rectangular diaphragm which is working on the Aluminium brake block assembly. Holding the two blocks together is a full Carbon, single piece cross brace which is mounted into the frame on a Titanium bolt. Wayne claims that the brace will be much, much stiffer than a standard lightweight calliper, meaning much improved braking performance on a par with a standard dual pivot. 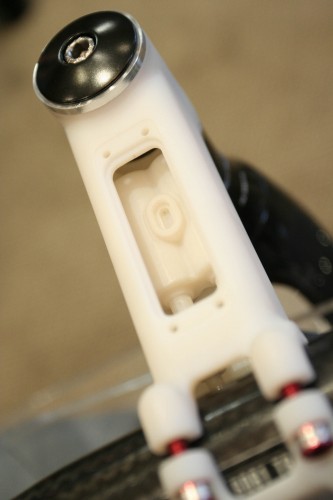 The master cylinders are housed inside the stem

So far, so good, but Ashima weren't interested in developing a hydraulic STI shifter, for obvious reasons. "We wanted the system to work with any road lever", Wayne says, "and the solution is to put the master cylinders inside the stem. You take your existing brake cable, feed it into the stem and clamp it to the piston in the master cylinder. From the stem downwards you have a hydraulic system". 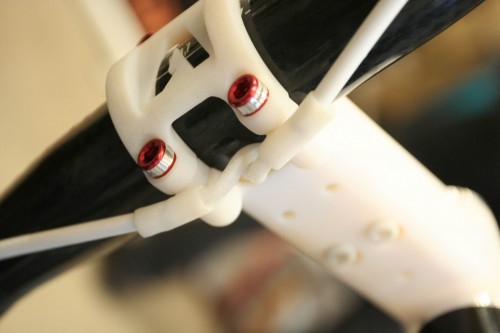 Obviously this means you're tied to Ashima's stem, but Wayne's been working on that too: using a taperlock system at the top and bottom of the stem, rather than clamping it into place with bolts, Ashima reckon they can shave 15-20g from the weight of the stem itself, compensating for the heft of the extra gubbins inside and giving the stem a very sleek look.

This is a lot of technology to be throwing at a weight saving, so will the gain be worth it? "it's a bit early to say", says Wayne, "but where we want to be is about half the weight of the Campag Skeleton". Given that Weight Weenies have that troubling the scales at just 282g for the full set, with the Ashima hydraulics you'd be looking at just 150g a pair, much less than the TRP R970SLs we tested not long ago, and similar to super-featherweight callipers from the likes of AX-lightness. The technology has uses other than the super light road market, too. Ashima had lots of interest at Eurobike (where they first showed the prototype) from the MTB XC racing scene, with riders realising that they could run their discs from super-light V-brake levers. Another possible future direction is a beefed-up version of the brake for commuting and touring, where Magura's hydraulic rim brakes have a minor but loyal following for their low maintenance, all-conditions performance. 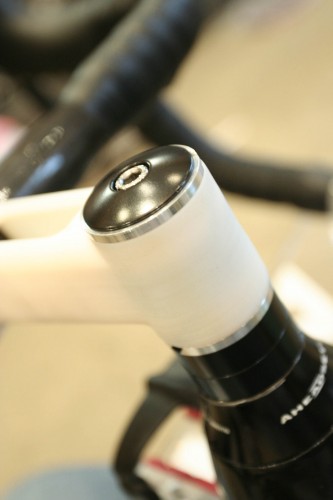 The stem uses a taper lock instead of clamping bolts

This isn't going to be a cheap brakeset but at a target price of £200 per wheel it's in line with other super-light offerings. The aim from Ashima is to outperform the traditional lightweight brakes, but obviously we can't say whether that's going to be the case or not. What we do know is that Wayne's off to France next week to spend a couple of days with a manufacturer who's intending to build a bike around the technology. Expect it to be a super high-end machine – whether the extra complexity will appeal to anyone who doesn't have a full-time mechanic to fettle with their bike after every ride remains to be seen...