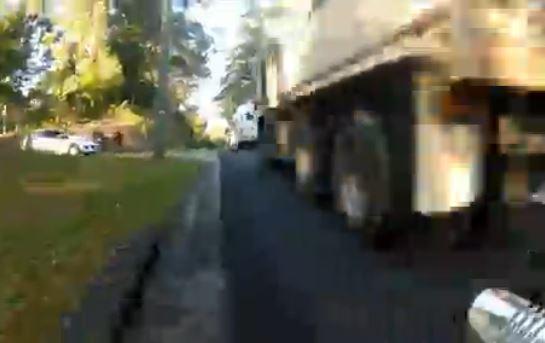 A lorry driver in Australia insists that he was only "technically" guilty after being convicted of passing too close to a cyclist. He said the video footage that brought him to court was shot by a cyclist with “a camera on his helmet and a big chip on his shoulder.”

Warwick Fribance was reported to police by a cyclist who said that he had breached Queensland’s 1.5 metre passing law. The rule, introduced in April, sets a safe distance for passing cyclists, reports the Courier Mail.

The 67-year-old, who decided to retire from trucking following the incident, was caught on video by the cyclist’s camera as he passed him.

His defence solicitor, Michael Robinson, said that Mr Fibrance was driving his truck uphill. To comply with the passing regulation he would have had to break another law by crossing a double white line in the middle of the carriageway.

There was no contact between Mr Fribance’s truck and the unnamed cyclist during the incident, which happened on 4 July, and he was said to have only narrowly broken the 1.5 metre limit.

“The truck missed him by a fair bit, but it was not (outside) 1.5m,’’ Mr Robinson explained.  “He has been caught out by technicalities of law.’’

Annette Hennessy, the magistrate presiding over the case at Maroochydore, agreed to waive the penalty of $341 that Mr Fribance could have faced.

She said he should be “convicted but not further punished’’.

The defendant said afterwards: “I would have had to drive over double white lines to be within the law. Technically I’m guilty but it’s wrong,’’ he said.

The now retired driver said of the incident: “It’s a war out there. It’s us against them.

“I hate the thought of him [the cyclist who lodged the complaint] sitting there sipping his latte and laughing at me.”

Under the minimum passing law, known as the ‘Split Rule,’ drivers in Queensland can face a maximum penalty of $4,400.

They are required to leave at least a 1-metre gap when passing a cyclist on roads with a speed limit of up to 60kph, and 1.5 metres on those with a greater speed limit.

“‘We always hear the argument that sticking to this rule would force drivers to overtake on the other side of the road but if there isn’t room they should wait … there is a brake pedal and we are more than ready to see them to use it,” he said.

He also said that the introduction of the law had encouraged more cyclists to buy cameras to video their ride in case something should happen.

“There are lots of people who take umbrage to our presence on the roads and a camera covers the cyclist if anything goes wrong,” he said. “More cyclists are buying cameras to help enforce the law.

“We certainly encourage cyclists to use cameras if they are road riders or sporting cyclists, they normally have the most issues on the road traffic.

“Police in Queensland have stated they are supportive of cyclists using the cameras if drivers are breaking the Split Rule.

“There is a small minority of drivers who seem intent on doing the wrong thing and then there are those that don’t pay attention to cyclists.”

Earlier this week, we reported how a cyclist in Sydney had used video footage to convince police he had done nothing wrong following an incident in which he was stuck by a car.

There is no minimum passing law in the UK, and while cyclists often capture footage of motorists passing them far too close, police seldom take action and only then in instances when there has been a collision.

However, a caravan company based in Gloucestershire sacked one of its drivers earlier this year after he was filmed overtaking a cyclist with just inches to spare.