We’re seeing ever more ranges of 2015 product now and the guys from UK distributor Chicken Cycles have just visited road.cc to show off what their brands have to offer. Here are the highlights.

Selle Italia have a new range of Novus saddles that are designed for endurance use and to cope with plenty of abuse. This is the Team Edition Flow model – Flow being the name Selle Italia give to their saddles with a central cutout. The new red Team Edition finish is available across a lot of different models for 2015. 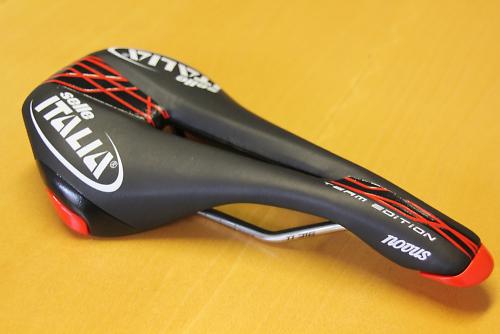 This version of the Novus comes with titanium rails, it’s available in two different widths, and it’s priced at £98.99. You find out which is right for you by going along to a dealer and using Selle Italia’s idmatch system that takes into account the type of riding you do, the width of your sit bones, thigh circumference and, unusually, your  pelvic rotation. 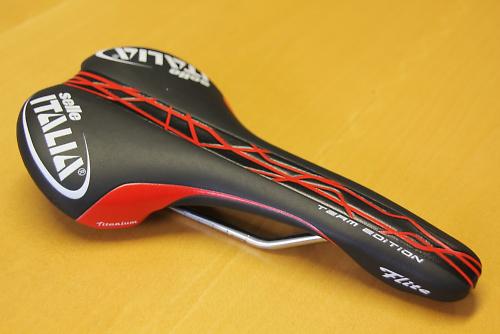 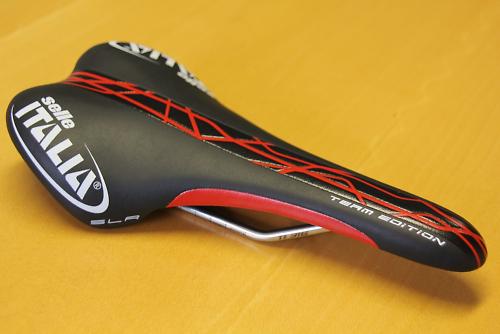 And here’s the SLR Team Edition (£109.99), the SLR being the best saddle in the world, according to, um, me. Okay, I think you've got the idea of what the Team Edition saddles look like. 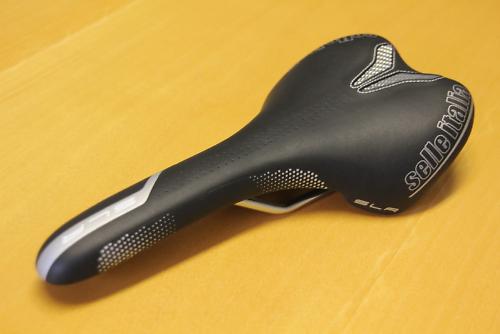 Selle Italia have added Friction Free versions of both the Flite (£97.99) and the SLR (£109.99), Friction Free meaning that they have a narrower nose than usual, a design feature adopted from their Monolink saddles. Selle Italia reckon this adds to both the comfort and performance for about 40% of riders. How do you know if you’re one of them? Go through the idmatch process. 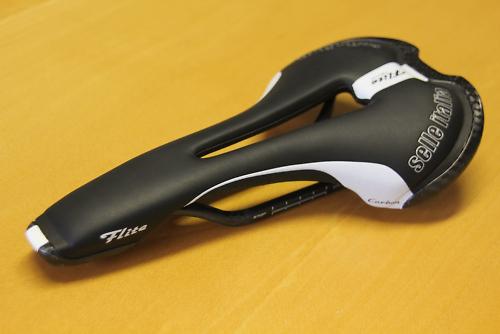 Just time for a couple more new saddles before we push on. This is the Flite Tekno Flow (£293.99) with carbon shell, Selle Italia’s CarboKeramic rails and a small amount of padding. 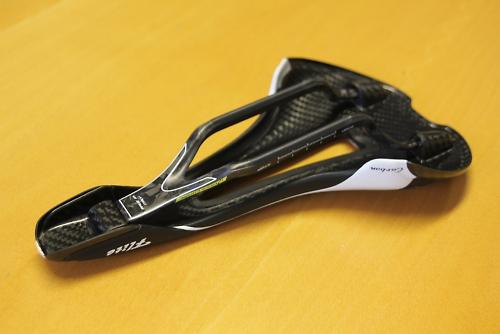 The claimed weight is just 125g. 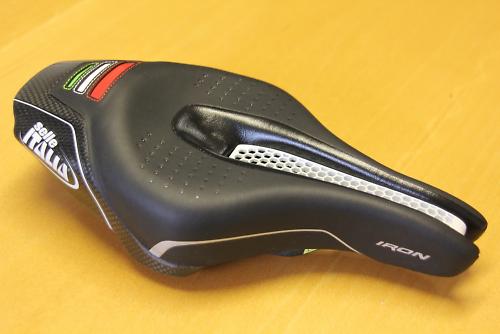 I don’t think we’ve shown you Selle Italia’s Iron saddles on road.cc before. The rails are set so you can position the saddle further forward than normal, effectively steepening the seat angle, while the tapered nose is designed to reduce thigh friction. 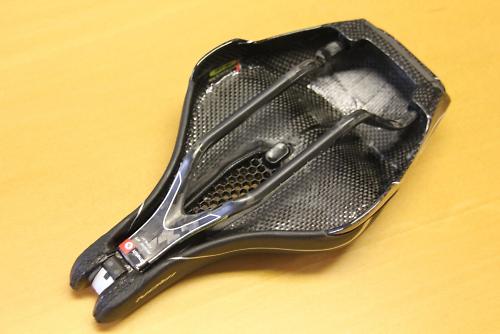 The design of the back end is intended to reduce turbulence and drag. This Iron Tekno Flow is the top model in the range and it’s priced accordingly: £283.99. We hope the saddle is a lot less painful than the price.

Recognise these? Of course, you do. Yer man Cipollini was always gadding about in Brikos back in the day. 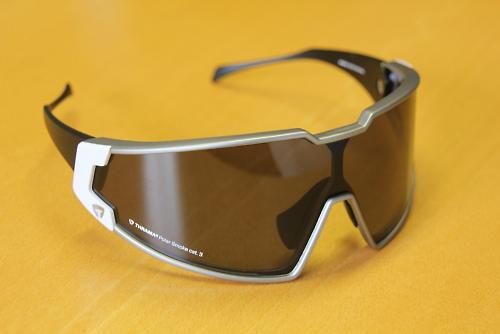 The Shot (£99.99) is based on eyewear worn by Cipo, coming with an adjustable nose piece and interchangeable lenses. The arms pivot downwards for storage, by the way, rather than folding straight in. 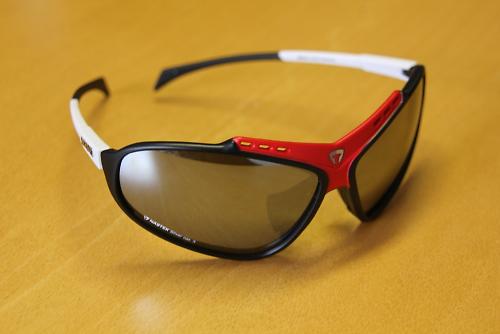 The Stingers (£89.99) are an evolution of glasses worn by Pantani. They come in a bunch of different colours and, again, the lenses are interchangeable; a second set of lenses comes in the package.

JetBlack have a new direct drive trainer called the Whisper Drive (don’t diss the road.cc carpet). Rather than using a resistance unit working on your rear tyre, with a direct drive trainer you drop out your rear wheel and use a cassette that’s mounted on the trainer, and change gear in the normal way. There are ever more options available now. 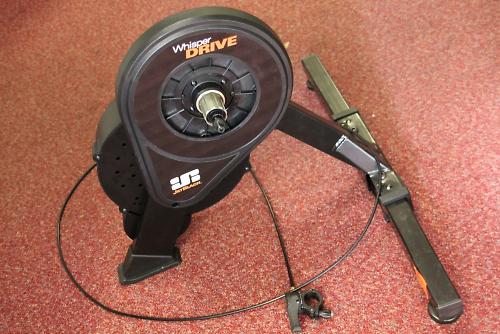 The JetBlack Whisper is priced at £399.99, compared to £500 for an 11-speed compatible Lemond Revolution trainer, for example. The resistance is supplied by a magnetic unit rather than a fan with the aim of reducing the noise.

We had a quick go on the Whisper and can confirm that it lives up to its name by being very, very quiet, and initial impressions are that it feels pretty realistic too – although we’d like to use it properly before commenting further on the performance.

As well as allowing you to move up and down the cassette, the Whisper has seven resistance settings (0 to 1,200 watts). It’s compatible with 10 and 11-speed cassettes, 130mm and 135mm systems, and even 12 x 142 thru axles. It comes with a Shimano/SRAM freehub body, but Campagnolo is available too.

JetBlack also have a free training app http://jetblackcycling.com/app (for both Android and iOS) for indoor training with the Whisper and other trainers in the JetBlack range. It provides training sessions and pairs up with Bluetooth or ANT+ sensors. It knows the resistance of your trainer so, once you give it your speed via a speed sensor it’ll give you a power reading. 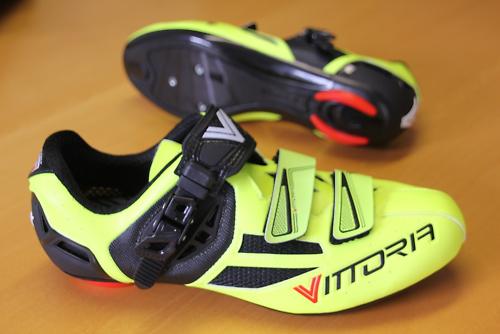 Vittoria have a new made-in-Italy shoe model called the Speed. Priced at £94.99, it comes with a nylon sole that’s designed to provide a medium level stiffness – efficient but more comfortable than some ultra-stiff options. 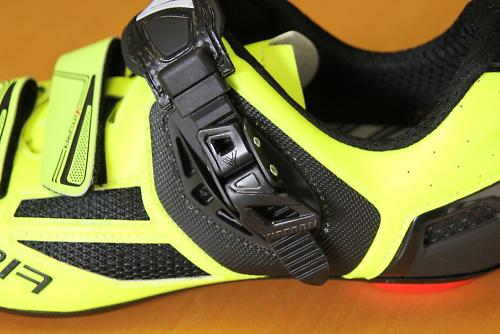 That’s a new closure design on there. Pull the lower lever to ratchet the strap in, push down the upper one to let it out – easy peasy! They’re available in non-high vis finishes too. 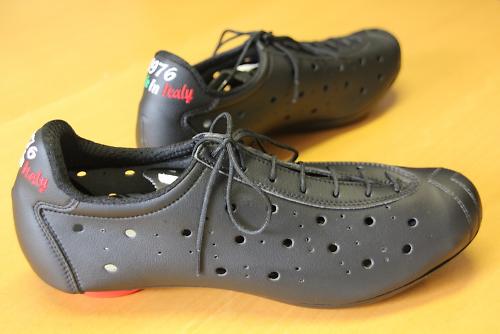 The Classic (£139.99) is an existing design aimed at L’Eroica-style riders. We can imagine hip urban dudes – ahem! – going for the style too. It’s available for both 2-bolt and 3-bolt cleat systems. 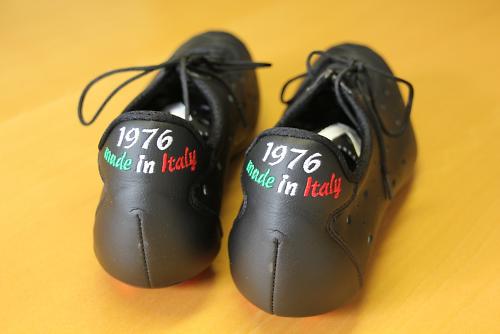 A version with a carbon sole and a mouldable insole is coming soon. It’ll be more expensive but we don’t have an exact price yet. 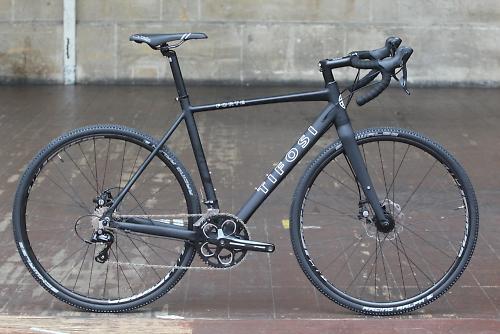 Tifosi have given their bikes an update for 2015, and they’ve left this Forte Disc with us for review. We reckon it looks pretty neat in an understated kind of way, and it also seems like good value at £799.99. 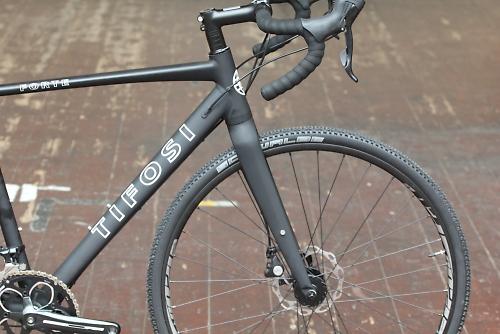 The Forte is a cyclocross bike, but aimed at commuters more than racers. The alloy frame comes with mudguard and rack bosses and there’s quite a bit of mud clearance if you do want to go off road. You can custom-build most Tifosi frames with the components of your choice but the Forte comes in a standard build, fitted with Shimano Sora components and Tektro Lyra disc brakes. 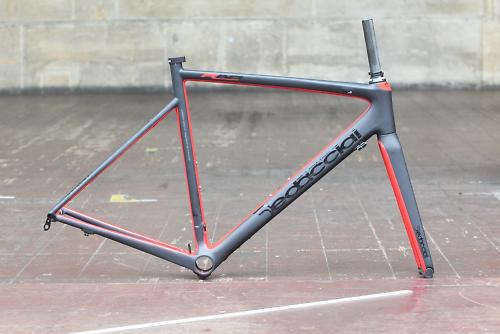 Deda – Dedacciai for long; Dedacciai Strada for even longer – have reduced the price of their top-end Ran frameset from £2,000 to £1,749.99. It’s Di2/EPS compatible and you see all those red details? You can have them in any colour you like as long as you give Deda about three weeks to do it. They’ve stuck with external cabling to keep the weight down, by the way. They boast that it’s 790g. 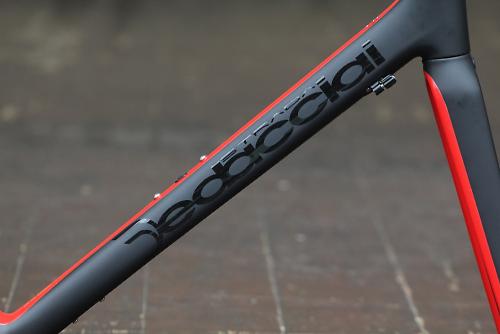 The Ran now comes as a disc brake option too (not pictured), the cable/hose going through the carbon blade of the new K-23 fork. The fork is equipped for post mount disc brakes and the same goes for the frame, the mounts being positioned outside the rear triangle. Deda claim a 950g weight for the frame, 395g for the fork.

All Deda’s wheels are now cheaper than before. The Deda Elementi WD45CCL aero clinchers that we reviewed back in February, for example, have been reduced in price from £1,799.99 to £1,499.99. 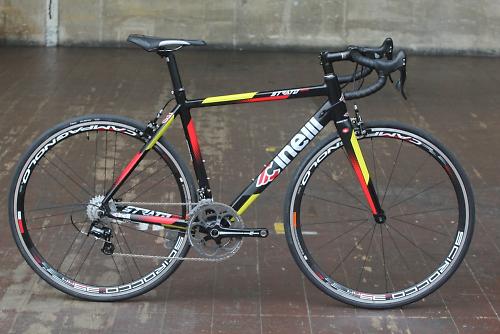 Cinelli have reviewed the geometry of their Strato, shortening the rear stays for a shorter wheelbase, increasing the head angle and seat angle slightly, and raising the bottom bracket a little to make the bike more suitable for crits/circuit racing. The loud graphics are new too. 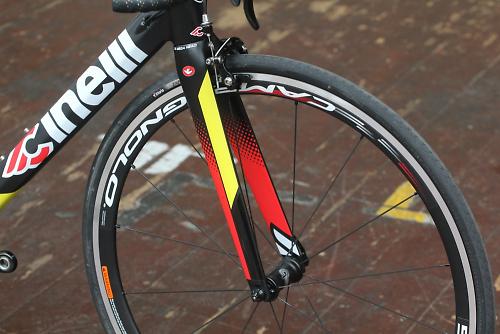 The complete bike, built up in this Campagnolo Athena groupset, is priced at £2,899.99 (other builds are available). 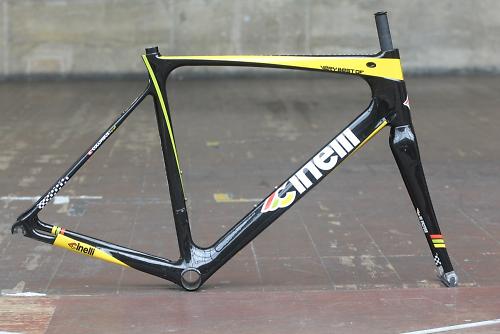 Cinelli’s top-end frame is fittingly called The Very Best Of. It’s a Columbus monocoque in a racing geometry, and it’s Di2/EPS ready (in other words, it’s suitable for electronic shifting). Cinelli give a frame weight of 925g, and 380g for the fork. The frameset is priced at £2,299.99. 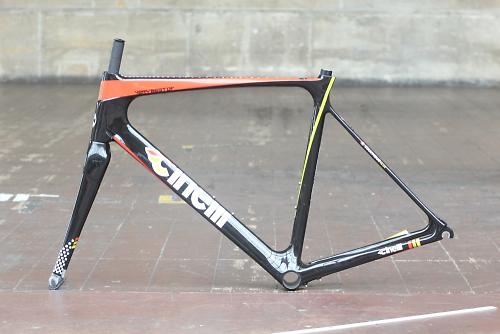 This is the same model from the opposite side, with different paintwork. 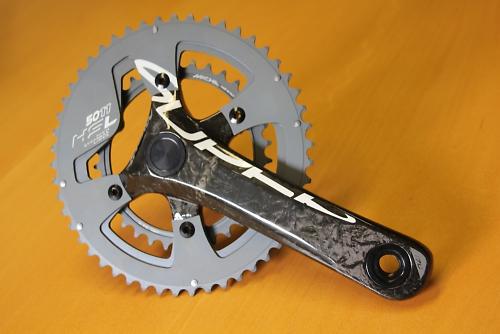 Miche’s new Supertype HSL chainset (£449.99) uses a four-arm design. The cranks are hollow and the chainrings are 7075-T6 aluminium alloy with an anodized surface treatment to increase resistance to wear. 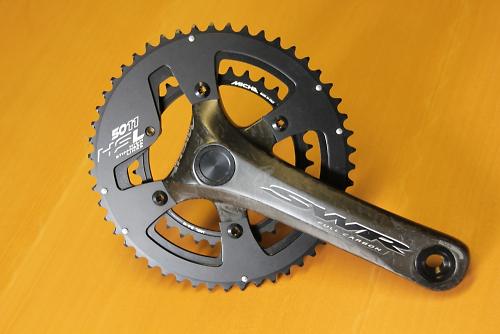 The SWR chainset (£349.99) is made to a similar design – the same four-arm design and chainring material – but the carbon construction is different so these are considerably cheaper at £349.99.

For more details on all of these ranges head to www.chickencycles.co.uk.

1
Marco Pantani's Mont Ventoux-winning Tour de France bike up for auction
2
Near Miss of the Day 501 (UPDATED): HGV driver said he had to cut corner because of fast oncoming traffic
3
Near Miss of the Day 502: Reckless driving "bad enough for me to call 999," says cyclist (includes swearing)
4
Win a Saris H3 Direct Drive Smart Trainer worth £850!
5
Pedestrian killed and cyclist seriously injured following crash on cycleway in Stevenage
6
What will kill you on the road (it’s not bikes) – new report highlights road deaths by vehicles involved
7
Is Shimano launching power meter pedals? 2020 patent for new sensor gives us hope
8
Updated: pop-up cycle lane that starred in government cycling promo film could be scrapped