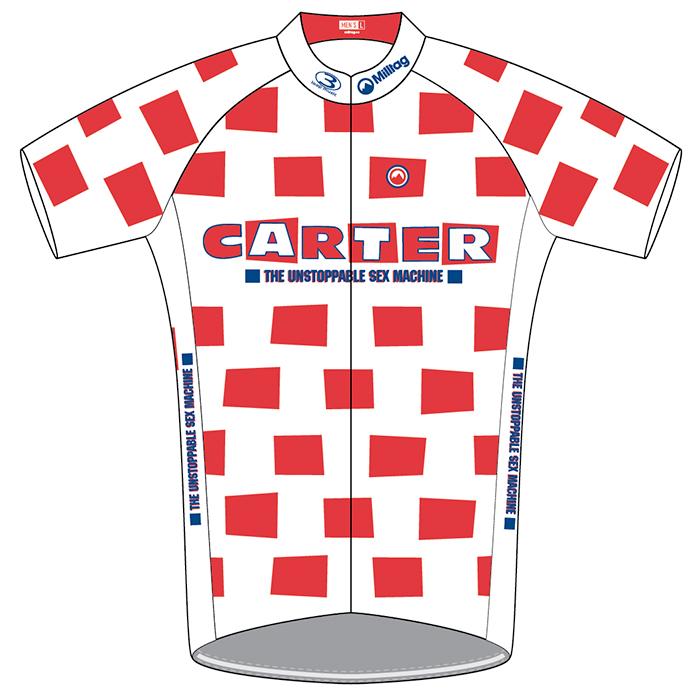 Indie guitar duo branch out into bikewear
by Mat Brett

Carter The Unstoppable Sex Machine, the indie duo who played their last ever gig at the O2 Academy, Brixton, last Saturday, have released a cycle jersey and cap in association with Milltag.

Band member Fruitbat – or Leslie Carter, if you prefer – has had a longtime interest in cycling, and wore cycle caps at pretty much every public engagement for a large part of Carter’s existence.

Since 1998, he has also been a member of a band called Abdoujaparov, named after pro cyclist Djamolidine Abdoujaparov – nicknamed the Tashkent Terror, as Phil Liggett delighted in telling us at every opportunity during 1990s Tour de France coverage. Carter USM are best known for singles Sheriff Fatman and The Only Living Boy In New Cross, and albums including 101 Damnations, 30 Something and 1992 – The Love Album, in the late 1980s and early 1990s. Oh, and for Fruitbat rugby tackling presenter Phillip Schofield on live TV. It's always worth another look, that one.

The jersey, with red not-quite-squares on a white background, is reminiscent of the polka dot jersey given to the Tour de France King of the Mountains

There’s a 30 Something logo on the middle pocket and the words “You fit bastard” on the back of the collar.

This is a reference to the “You Fat Bastard” chant that was a fixture of Carter USM gigs over the years. It was originally directed at the late lighting engineer and occasional MC Jon “Fat” Beast who encouraged the chanting himself. The phrase was also used as the title of a Carter USM CD anthology.

“[The jersey] is constructed using hi-tech Coolplus fabric throughout – designed to keep you fresh, cool and comfortable and are cut to be aerodynamic yet to fit normal cyclists,” say Milltag. “[There is] a full length hidden zip, silicone gripper on the bottom hem to keep it in place and a hidden security pocket in the three rear pockets. This unisex jersey is available in both womens’ and mens’ cuts.” The one-size cap in a similar design is priced at £15.

You can pre-order between now and 14 December with delivery expected in February.