Trek Factory Racing in the red for 2015

Black is out, red is in for newly painted team bikes for next season
by David Arthur @davearthur

The 2015 professional racing season is nudging ever closer and it’s that time of year when new kit and bikes are being rolled out at training camps across Europe. Trek Factory Racing have unveiled the bikes they’ll be racing next season, and in a shock move they’ve ditched the black and white paint jobs of the last couple of seasons for a bold new red colour scheme. 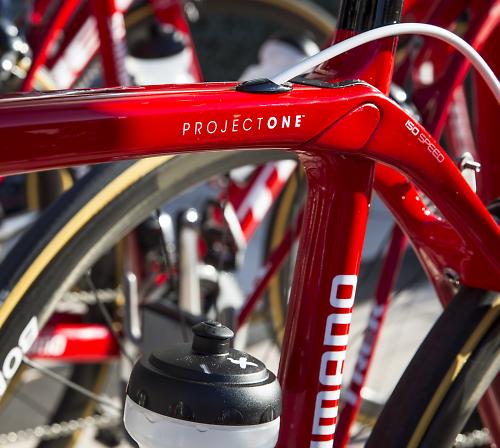 Trek Bikes have also complemented the red painted frames with colour matched stems and clean white decals, with white panels on the inside of the fork blades and chainstays, a treatment we’ve seen on a handful of other bikes in the past. They’re certainly smart looking bikes, provided you like red bikes, and will be sure to standout in the peloton. 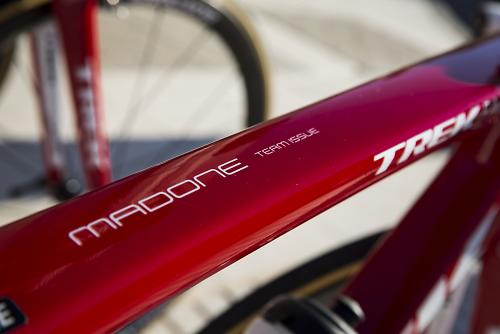 From the photos showing the team getting together for the first time, it’s clear that the new Emonda model is being used by a fair few of the team, but there are still many Madones to be spotted - which will appeal because of it's greater presumed aerodynamic performance over the Emonda, which is built purely to be as light as possible. Teams are already well up against the UCI's 6.8kg minimum weight limit as it is, they've likely had to add ballast to the Emonda to keep the suits happy.

RT @f_cancellara: Red it is! How do you like the new @TrekFactory team bike? #Domane #Trek #Bike pic.twitter.com/7giphNxDS3

Fabian Cancellara sticks with his favoured Domane of course, the bike he helped developed and has used so devastatingly in the Spring Classics over the years. Cancellara has been riding a custom painted Domane with a Spartacus paint job for the past couple of years, we wonder if he’ll bet getting another custom painted bike come the start of the season, or sticking with the team edition? 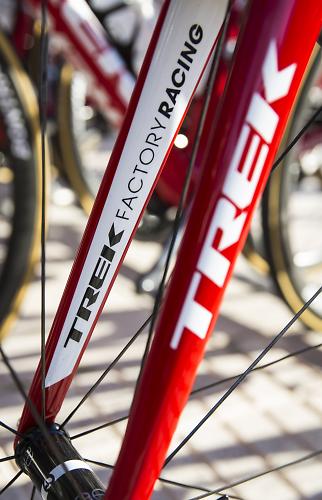 Something else we’ve spotted in this photo, Fabian Cancellara has long been a proponent of Speedplay pedals (in fact he was part of the reason I first started using them many years ago, and have never looked back since) but in this photo he’s clearly not using Speedplay, instead he looks to be using Shimano SPD-SL pedals. It’s not clear what has prompted the change of pedal.

From the photos we can see that Trek Factory Racing haven’t made any significant equipment changes. Shimano Dura-Ace Di2 groupsets still feature (well apart from Cancellara who sticks with a mechanical groupset), with Bontrager Aeolus wheels (with all-new, slightly retro looking decals) and Bontrager handlebars, saddles and stems. They also stick with SRM Powermeters. The red painted bikes are all the work of Trek’s own Project One customisation programme, a fact proudly declared on the top tube of each frame. The bikes are also finished with white saddles and bar tape, naturally, but also white seat masts and cable housings. It’s all in the attention to detail.