Take a look at an £1,800 road bike that’s designed with comfort in mind
by Mat Brett

Merida’s Ride 5000 is a bike that blurs the line between traditional road bikes and the not-so-new-any-longer genre of endurance road bikes.

Most of Merida’s Ride bikes provide quite a relaxed ride position, but the Ride 5000 is a bit more aggressive; just not as aggressive as a stretched out road race bike. 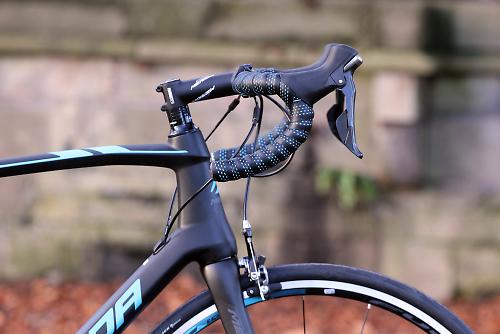 This calls for some quick stats to demonstrate the point.

• The Ride 3000 – not the model we’re testing – has a stack of 611mm and a reach of 378mm. In other words, the ride position is significantly shorter and higher than that of the Reacto to provide a more upright ride position.

• The Ride 5000 – our test bike – has a stack of 598mm and a reach of 382mm. So, the ride position sits between that of these other two bikes, closer to that of the other Ride than to the Reacto. 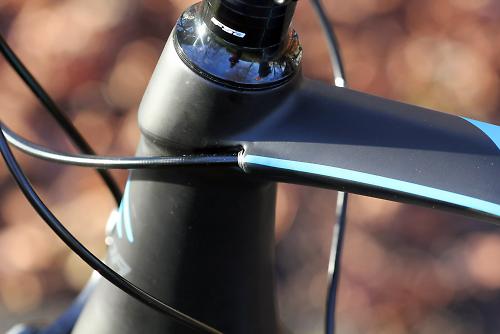 In short, the Ride 5000 provides you with a ride position that’s more relaxed than that of a low and stretched race bike that’s optimised for aerodynamic efficiency, but it’s not as upright as many endurance or sportive bikes. It’s exactly the same as that of the Merida Ride Pro Team that we took for a First Ride. That was the bike that members of Team Lampre-Merida raced over the cobbles last year.

The idea is that the Ride 5000 is still very much a race-capable machine but with added comfort. That comfort doesn’t come just from the geometry; the Merida designers have included many other tech features designed to improve the ride quality too. 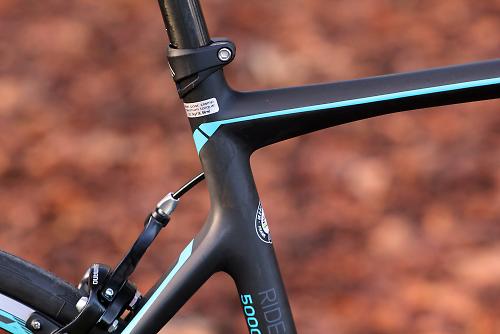 The seatstays meet the seat tube well below its junction with the top tube, for example, the idea being to allow more comfort-inducing flex at the saddle, and the skinny 27.2mm carbon seatpost is intended to provide more give than a chunkier one. 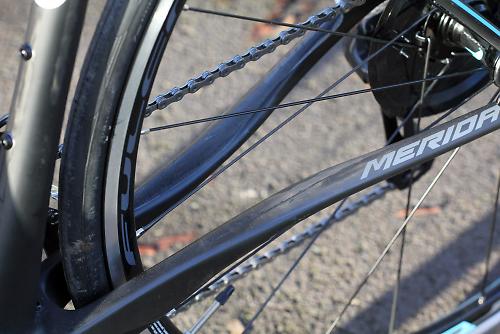 Merida say that the ‘Flex Stay’ seatstays and chainstays are specifically designed to absorb bumps and vibration too. The profile of the seatstays is short and wide, as if they have been squeezed between finger and thumb, to encourage up and down movement while retaining sideways rigidity, and the chainstays flatten in a similar way as they move away from the bottom bracket.

Merida say that they use bio flax fibres in the mix as well to dampen vibration further. Essentially, they add a central layer of this compound between layers of carbon-fibre in the mould. 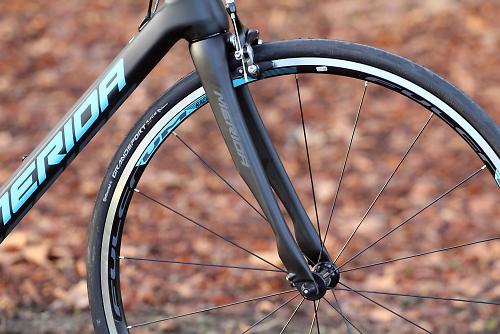 The F-Flex fork is designed to allow a degree of up/down movement and dampen vibration with legs that taper in the lower third (check out the picture and you’ll see what we mean). As well as improving comfort, Merida say that this provides extra handling safety, and they reckon that it doesn’t affect the fork’s steering precision or braking performance. 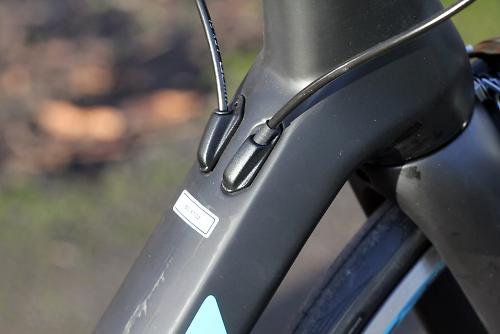 Like most other mid to high-end performance bikes these days, the Ride 5000 comes with a tapered head tube for extra front end rigidity (it’s a 1 1/8in bearing at the top, 1 1/2in at the bottom), and it gets neat internal cable routing that’s compatible with Di2 electronic shifting. 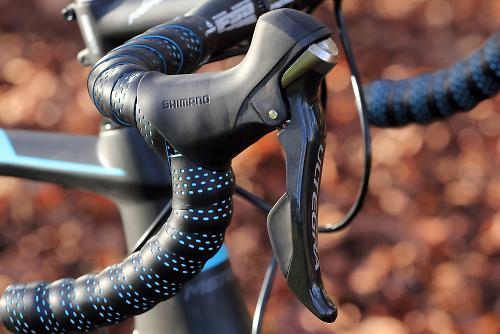 This bike comes with mechanical shifting, though: Shimano’s second tier Ultegra shifters and mechs with a downgraded Shimano RS500 compact chainset (with 50 and 34-tooth chainrings). That’s matched up to a very wide-ranging 11-32-tooth cassette. The teenie weenie smallest gear might come to your rescue on the last big climb of a tough day in the saddle. 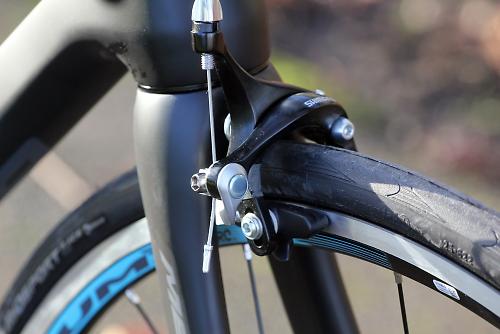 The brakes are non-series R561s (they don’t belong to any groupset). They’re dual pivot and they’ve performed pretty well when we’ve used them before, so we’re hopeful again here. 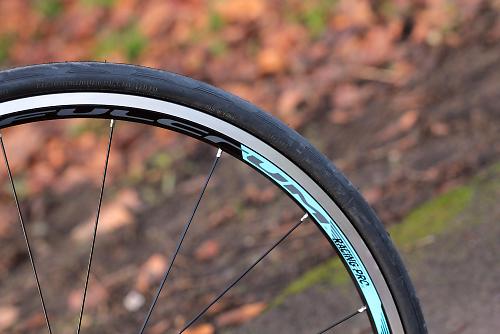 The wheels are Fulcrum Racing PRCs with Continental Grand Sport Race tyres in a 25mm width. The extra volume over 23s will add some extra comfort, making a lot of sense on a bike of this type. 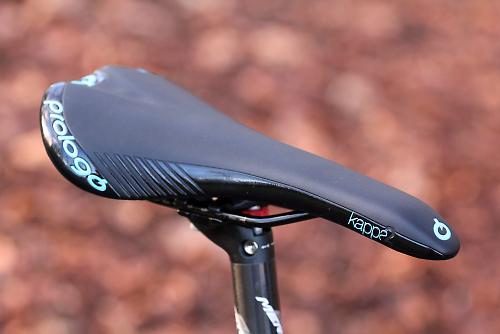 ControlTech provide the alloy stem, the handlebar is an FSA Gossamer, and the saddle is a Kappa 2 from Prologo.

Oh, and the Ride 5000 comes with discreet mudguard mounts – discreet to the point of being almost invisible unless you go hunting for them.

One more detail you might be wanting is the weight. Our large sized review bike hit the road.cc Scales of Truth at 8.31kg. That’s 18.3lbs. 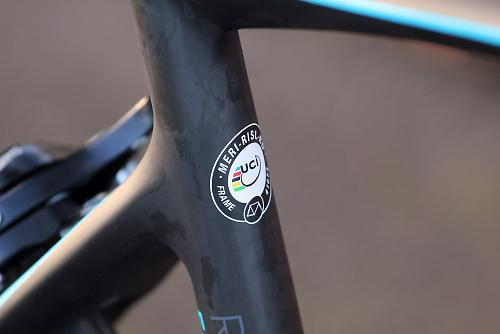 The Ride 4000 has a Shimano 105-based spec (the next level down in Shimano’s groupset hierarchy) while the 3000 has largely Shimano Tiagra components (another level down again). 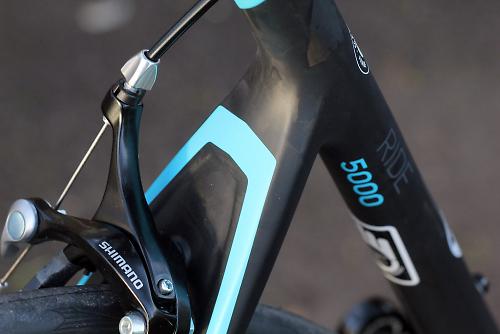 Without us having yet ridden the Ride 5000, £1,800 looks competitive for a bike of this kind. Of the bikes that we’ve reviewed recently, the closest to it in terms of price is the Rose Xeon Team GF-3100 at £1,733. That bike has an alloy frame and an outstanding spec for the money with a Shimano Ultegra Di2 groupset and DT Swiss R23 wheels. 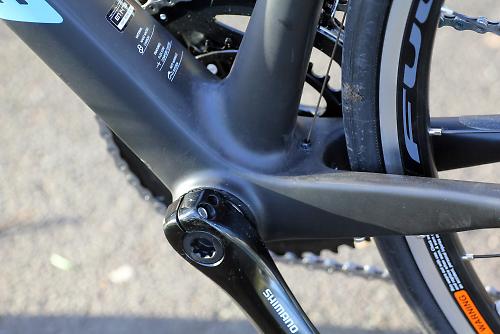 The Eddy Merckx EMX-1 that we reviewed last year was priced £1,949 – £149 more than the Merida. It’s built around a carbon frame and fork and has a Shimano Ultegra groupset and Fulcrum Racing 7 wheels. Like the Ride 5000, it has a downgraded brakeset (Eddy Merckx dual pivots), although it comes with a Rotor 3D chainset.

So, that’s a brief introduction to the Merida Ride 5000. Next comes the fun bit: the riding. We’ll be back with a full review as soon as we’ve chalked up the miles. In the meantime, go to Merida’s website for more information.