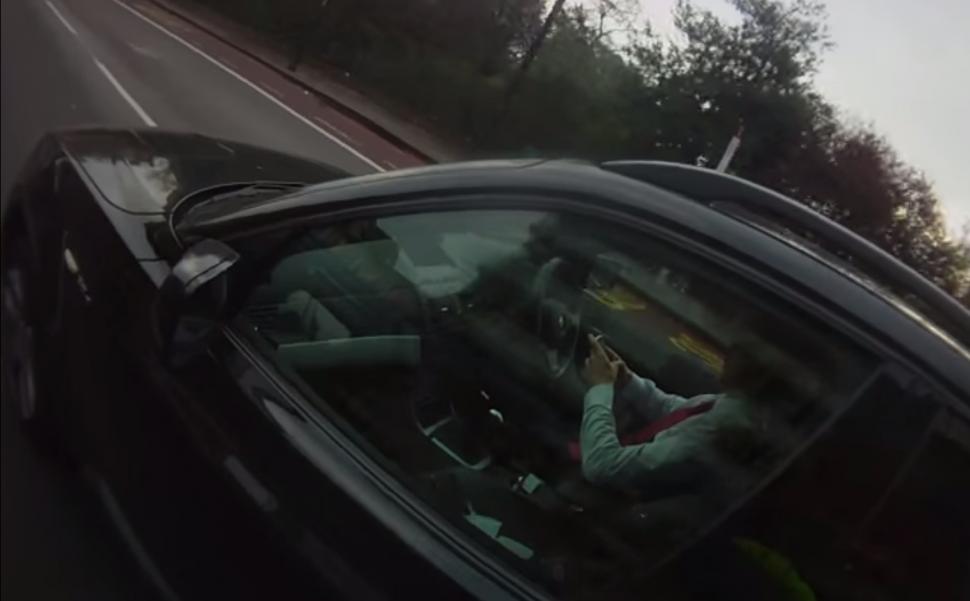 "Get in the cycle lane" says texting driver at the top of our round-up + there's a slow-mo Oz crash, and some roller abuse...
by Elliot Johnston

We start the round-up with one of these ignorant drivers. One, in fact, whose disregard for other road users' safety is quite unbelievable.

He's followed by a seriously dangerous piece of driving, a cyclist-on-cyclist collision, some horsing around in Lewes, and a multi-bike pile up in the Tour Down Under beautifully slowed down.

Away from videos captured on the road, we've got a short documentary about a locally famous New York-based pizza delivery cyclist who sadly passed away this week. That video is joined by a swift and smooth rundown of how Seven Bikes are made, and a set of rollers used in a really stupid manner.

No-hands driver: “get back in cycle lane”

We've seen cyclists catch drivers out eating cereal, talking on the phone, and texting before. Action cameras have opened up the door for all sorts of vigilante road monitoring.

What's frustrating about this particular instance is the driver's supreme hypocrisy.

Not only does this Mini driver overtake around traffic furniture, they also go on to run a red light. Unbelievable.

This pavement-riding cyclist got pretty lucky here. Fortunately for him it was only YouTube ride-recording personality Cycle Gaz who hit him as he crossed the road without looking.

If it had been anything larger we doubt he'd have been able to get away so quickly, without checking to see if Cycle Gaz, who was lying on the floor, was okay.

Lost horse on the loose in Lewes

"It's alright, I've done this a few times," said the driver in pursuit of the escaped horse that took to the streets of Lewes this week.

This video shows a cyclist's view of the chase around town. Enjoy.

Slow-mo crash from the Tour Down Under

You may have already seen this crash, especially if you’re a regular here. When we ran our story on this spectacular collision, we took Jeremy Roux’s perspective as he dodged through the mayhem.

This angle gives you a surprisingly elegant look at the carnage that the French rider miraculously avoided.

This here is a beautifully shot documentary which contains a brief look into the life and career of New York City-based pizza delivery courier Bill Meier.

Mr Meier, known by many around him as Wild Bill, was a scruffy looking bike courier, who sadly passed away this week.

Here's a brief description of the man in this video by Reddit user scoofy:

"He rode a white continuum frame that was apparently a gift from the manufacturer. He would pine about ragbrai. He'd borrow my pump far more often than he should have. He never wore a helmet. He never used brakes. He always road with one hand while carrying pizza. The only conditions he didn't ride in was hurricane sandy, because it closed the shop, anything else was fair game. I honestly don't know how he managed it."

How to make a Seven bike

This is a quick visit to the factory of Seven Cycles.

Based in Massachusetts, this is a great video that goes from early in a Seven bike's life, right up until the point that it's boxed up and ready to roll.

This doesn't seem like a good idea to us...

1
Cyclist found guilty of riding carelessly in crash which killed motorcyclist
2
“I don’t want to see someone die on my doorstep”: Council urged to sort out notorious zebra crossing where near misses “happen every day”
3
Near Miss of the Day 836: Company takes firm action after tanker driver close passes cyclist
4
Five-year sentence for van driver who killed cyclist while distracted by Facebook and Instagram
5
Zipp: any damage from Wahoo Kickr Rollr still not covered by warranty – plus more tech news from Strava, Zwift, Hammerhead, Selle San Marco, Syncros, and more
6
MP "horrified" by footage of multiple drivers hitting cyclists and pedestrians at "Britain's most dangerous" zebra crossing
7
Parliament says folding bikes allowed... if they fit through security scanner
8
Cycle lane branded a "s*** show" by local politician furious at reduced width of road