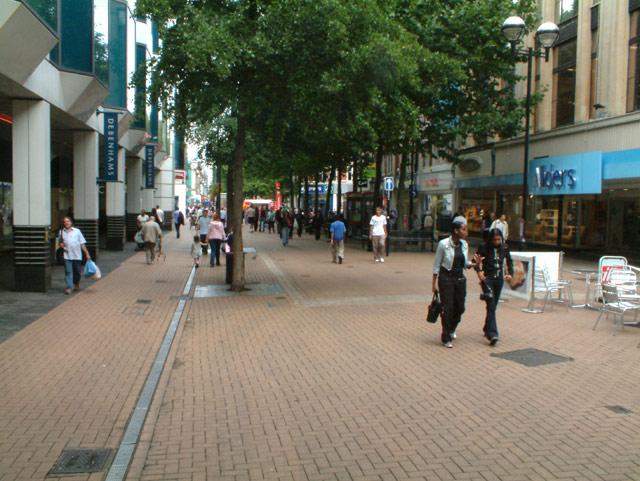 Cyclists to be allowed on Croydon's pedestrianised main shopping street

Cyclists will be allowed to ride on a busy pedestrian shopping street in Croydon under a trial scheme announced by the local council.

Cyclists are currently banned from riding bikes on North End, home to the Centrale and Whitgift shopping centres, outside the hours of 6pm and 10am, and even then they are only allowed to ride northbound.

However, the Croydon Advertiser reports that Croydon council’s traffic management committee has approved an experimental traffic order that will let cyclists ride on the street for the next 18 monhs, with the scheme potentially being made permanent afterwards.

The trial, which could start next month, is being financed by a £15,000 grant from Transport for London, and will also see a contraflow cycle lane installed on a section of North End between Poplar Walk and Tamworth Road where motor vehicles are allowed.

A report considered by the committee said that the proposals “will help to increase the number of trips made by bicycle and will provide relatively quiet and safe routes with practical destinations for the less confident cyclist. They will open up more opportunities for safer and more attractive cycle journeys.”

It also acknowledged that “given the hazardous nature of the routes …  for those on bicycles, it is not surprising that North End is an attractive route for cycling, although cycling is currently not permitted in one direction and is restricted during daytime in the opposite direction,” adding that “pedestrianised streets are also important routes and destinations in their own right.”

The London borough’s cabinet member for traffic and environment, Councillor Kathy Bee, says that alternative routes such as Wellesley Road "are not safe" for cyclists, with the council saying that 15 incidents involving cyclists, two described as serious, have been recorded on that street alone.

By contrast, the council was not aware of any incidents involving pedestrians and cyclists on North End during the period in question.

"At the moment, the reality is that quite a lot of people do try to take their bike down there,” she said.

"The plan is experimental, this is not something where we've made a final decision on yet.

"If there are problems, we can stop it, but we hope it’s successful."

She continued: "Actually cyclists are quite likely to come off badly as well if [a collision with a pedestrian] happens.

"From a cyclist's point of view running into people is not a great idea."

The council is looking for feedback on the trial during the first six months it is in place, at which point it may be reviewed.

Croydon Cyclists, the local branch of the London Cycling Campaign, is in favour of the trial, with spokesman Kristian Gregory saying: "This is an important step in the right direction to facilitating safe cycling in the town centre and local businesses will appreciate the increased trade that cycling routes bring.”

He added: "The council can complement this by making the roads leading in to the town centre fit for people of all ages and abilities to cycle on – by introducing protected cycle lanes on main roads such as London Road, Brighton Road and Wellesley Road.

"This is an important step in the right direction to facilitating safe cycling in the town centre and local businesses will appreciate the increased trade that cycling routes bring.”

In 2010, Croydon was named one of London’s ‘Biking Boroughs,’ but as we reported last month, it is tied with Edmonton as the city’s worst local authority when it comes to road deaths, with 33 recorded since then.

The council currently has what many would see as an unambitious – but certainly achievable – target of 4 per cent of journeys in the borough being made by bike by 2026.

1
Near Miss of the Day 794: Driver passes cyclists signalling right — police suggest riders should have turned quicker
2
Tabloid panic over study (apparently) saying cyclists could crush their genitals if they don't get out the saddle
3
National Highways warns of "significant dangers" in racing time trials on major roads following A11 death
4
Cyclists robbed by moped gang as two more bikejackings reported across south London
5
"They said give us the bike or we stab you": Another cyclist targeted by motorbike-riding muggers on popular route out of London
6
Near Miss of the Day 793: No action for driver overtaking into oncoming traffic (+ interesting Operation SNAP feedback)
7
road.cc Recommends updated with 11 brilliant new products
8
Cyclist's severed foot found on hit-and-run suspect's car as driver arrested