Things that are good about rollers: they're simple to set up, quiet and easy to stash under the bed when they're not being used. For most people the main downside is that fact that you need to keep your wits about you - one slip and you're off and careering into the sideboard/sofa/wall/plate glass door. We've heard apocryphal tales of over excited roller users watching the Tour on rollers, coming off in the cut and thrust of the final sprint and riding straight through their telly.

Well, Elite feels your pain. They were showing off their new set of rollers at IceBike, the E-Motion. You might recognise the profile of the roller drums themselves from Eilte's Ghibli unit; they're a similar parabolic shape which gives you a bit of a nudge if you're close to the edge. With the E-Motion, though, Elite have taken the concept a stage further. By the front drum there's a smaller roller, a bit like a skate wheel, mounted horizontally on both sides of the frame. Should you reach the limit the roller contacts with the tyre or rim and stops the wheel leaving the roller. It's such a simple idea that we were amazed no-one had thought of it before, but Elite were adamant that they hadn't.

The biggest change, however, is that the entire roller bed is floating within a separate frame that's in contact with the floor. The rollers are centred with springs and can move forwards and backwards a few inches. This effectively means your bike can move underneath you much more naturally, especially when you're out of the saddle and going for it. 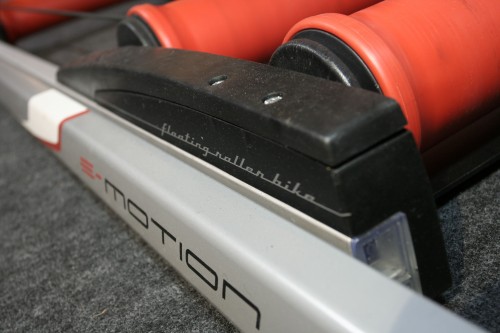 The upshot, Elite say, is that it's 'nearly impossible' to fall off the E-Motion rollers and though we gave it a good go on our short test run we'd have to say that they're right. The motion of the bike is much more natural than fixed rollers and even when you're really going for it the platform feels very steady. It's more often than not your front wheel you lose on the rollers and that really isn't possible here, unless you hop over the little wheel. slam it into the side and it just bounces back, it's very reassuring. There's three levels on the resistance on the E-Motion, they're accessible by a switch on the side of the unit so you have to pretty much pick one and stick to it, but there's plenty of magnetic resistance in there if you want to do a few hill reps. Without some kind of costly wireless switch it's hard to see how they'd bo a bar mounted control, you don't really want a trailing wire anywhere near a set of rollers. One for the next incarnation, maybe?

Sounds all good? It pretty much is, except for the bit where you get your bank statement the next month and there's a £649.99 hole in it. That's some wedge for a set of rollers but if it has to be the best – and you're going to put the hours in to justify the spend – then they look like they'll be the new benchmark.