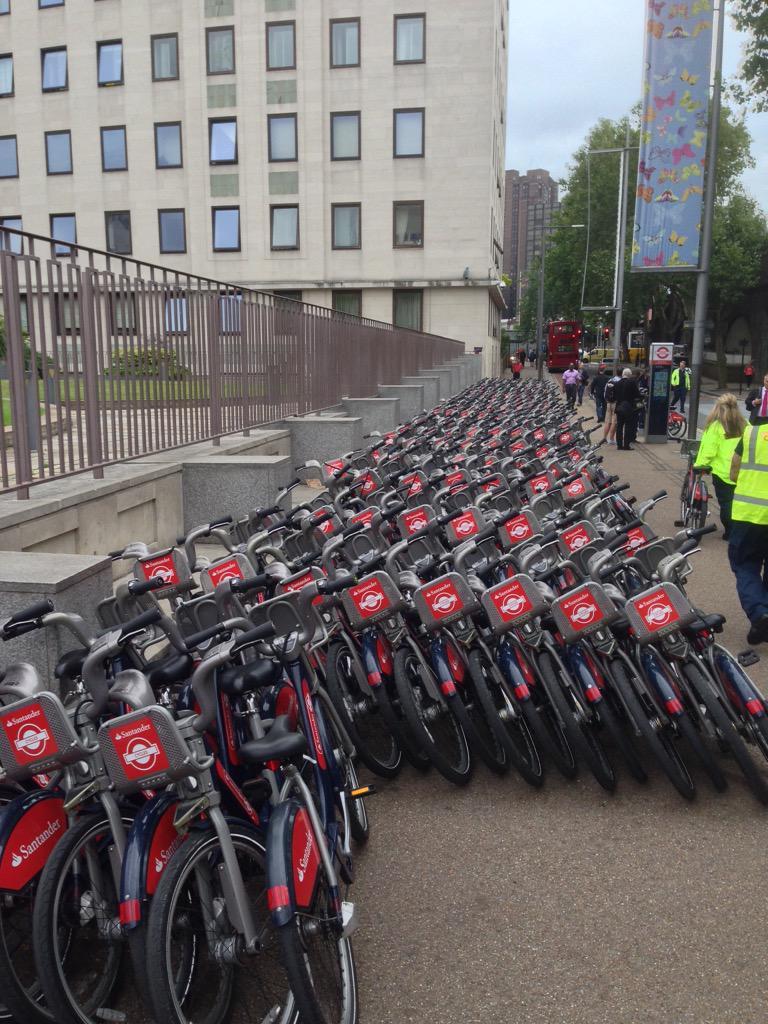 How is the tube strike for you? Don't ask? Or is it business as usual?

With all of London using the city's roads to get around today - apart from journeys by Overground and mainline rail, which are still operational - as the tube strikes rule out subterranean travel, hire bikes are in even greater demand than normal.

Santander Cycles are being stacked on the street like dominos in makeshift hubs where demand is greatest, in a bid to ease pressure on the city's groaning roads.

Meanwhile the #bikethestrike Twitter hashtag has revealed the scale of cycle commuting across Central London, as the London Cycling Campaign offers tips for newbie cycle commuters.

Transport for London have laid on extra cycle hubs at the following locations:

While existing hubs at Waterloo, Stonecutter Street (near Holborn and the City), Newgate Street (Bank/Cheapside/St Pauls) and Belgrove Street (Kings Cross) will have more cycles than usual.

The Santander Cycles app has seen a spike in downloads to more than 70,000 as desperate commuters search for a ride home.

We have Pop-up Hubs in Central London to leave your bikes or check our #SantanderCycles App for your nearest bike pic.twitter.com/hgelO6Sxzb

Those who would normally have crammed into tube trains today are squeezed cheek by jowl on buses, or filling every remaining inch of road on two wheels.

While the Metropolitan Police's Cycle Safety Team have cancelled their other engagements to assist the "larger than normal amount of commuters".

Good morning, the team will be out this morning assisting the larger than normal amount of commuters, say hello when you see us. #cyclecop

And are nicking some bad drivers while they're at it.

Second seizure of the day- a BMW driver without insurance. Now without a BMW. #CycleCop pic.twitter.com/HEJlnC7Nox

There's a silver lining to the strikes, of course. Evans Cycles is offering free bike check- ups, and the London Cycling Campaign is giving away a prize for the best #bikethestrike photo on Twitter.

London cyclists are also being asked to post their near misses.

Did you #bikethestrike this morning? If you had a crash or near miss as a result report it on http://t.co/YXHzsevBCf to show the #hotspots

While for some people, it's just business (commute) as normal.