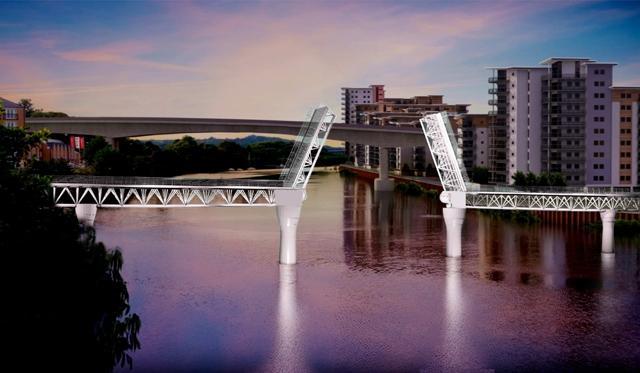 The final section of a new bridge that will provide a vital link for cyclists and walkers across the River Ely in Cardiff Bay has been lifted into place this week with the help of Britain’s biggest crane.

It took a full week for the four sections of the bridge, each of which weighs between 38 and 46 tonnes, to be fully installed, with erection of the 1,200-tonne crane alone taking three days.

Called the Pont y Werin (the People's Bridge), the bridge, which has a 20-metre section that opens to allow ships to pass through, is due to open on June 8th and will link the International Sports Village in Cardiff Bay with Penarth.

Funding for the project, which completes the Bay Edge Walkway and cycle route, was provided by the Welsh Assembly Government (£1.645 million), Cardiff Council (£1.3 million), Sustrans (£1.15 million from the Big Lottery Fund), Cardiff Harbour Authority (£250,000) and The Vale of Glamorgan Council (£200,000).

Lee Waters, Director of Sustrans Cymru, welcomed the new bridge, saying: "Pont y Werin will truly be a people's bridge. By completing a circuit around the Bay this new bridge will be a superb new local facility for everyday travel in the city as well as a national landmark. Voted for by the public and named by local children, the bascule bridge for will not only open for boats, but it will open the way for people to get from Cardiff Bay to Penarth and beyond in more sustainable ways. "

Councillor Delme Bowen, Cardiff Council's Executive Member for Transport and Transportation, Cllr Delme Bowen, also welcomed the project reaching a landmark stage, saying: "Pont y Werin is a fantastic project and as chairman of the Pont y Werin steering group I have been fortunate to see all the pieces of the project coming together."

He continued: "The bridge will make a huge difference to the cyclists and pedestrians who commute between Cardiff and Penarth and I know they are looking forward to using the bridge. It will be very satisfying to see the bridge being put into place and it will mark the start of the countdown to the bridge opening on June 8th."

Councillor Jeff James, cabinet member for planning and transportation, added: "The Vale Council is thrilled to see the final pieces of Pont y Werin coming together in what is a pivotal moment for the project. When open the bridge will provide a valuable link for residents of both Cardiff and the Vale and is an excellent example of organisations working together for the benefit of the local communities."