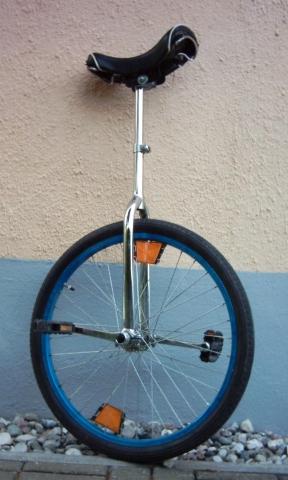 "Adrernaline junkie" Jake Taylor and pal Sam McGurk got up to speed quickly...
by Simon_MacMichael

Two 10-year-old boys in West Yorkshire have been turning heads in their local village – by riding to school on unicycles.

Jake Rayner – described by his mum Jodie  as “an adrenaline junkie” and his friend Sam McGurk undertake the journey each day from Wyke, where they live, and Shcoles Village Primary.

Mrs Rayner told the Telegraph and Argus: "At first I was terrified by it. I followed him at first because I dropped off other children I child-mind.

"But I am confident enough now for them to both go on them on their own. It is strange to see. I pass them and you see work people in vans laughing.

"They only took a couple of months to get the hang of it. I am definitely impressed. It makes me chuckle how people tend to slow down and point. They won't have seen it before.

"I have put him on Facebook for friends and family and they love it. They have said we should get them into the circus - Jake wants some batons next!"

According to Mrs Rayner, the boys got used to the unicycles very quickly. "They just pedal and pedal until they get to school,” she explained. “

They used to go to school on normal bikes. It is a great way for the boys to get exercise - they will have massive leg muscles.They have learned to do bunny hops on them as well!"

Neither she nor Jake’s father, John, will be joining the lads on a one –wheeled school run, though.

"Sober and drunk, we still cannot do it," she revealed, adding, “We are too scared of cracking our heads."

Jake is a bit of a YouTube fan, according to his mum, who says it’s where he first became fascinated by unicycles – so presumably he’ll already have seen this extreme unicycling video from Germany?