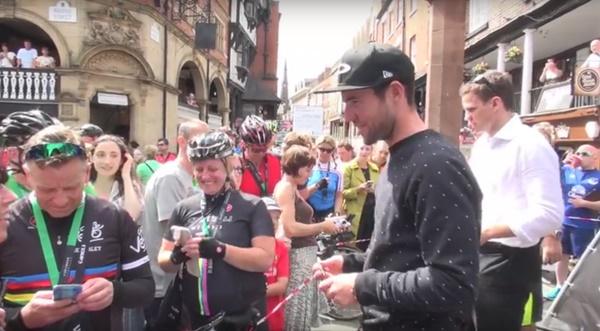 Mark Cavendish Rise Above Sportive to return to Chester in August

Chester is to play host to the second Mark Cavendish sportive in 2016. Rise Above will take place on Sunday, August 28 with three routes available – 80km, 120km and 160km. Cavendish himself rode the middle route last year and race schedule permitting he hopes to be in attendance again.

The 2015 event, which raised money for its two charity partners Right to Play and Help for Heroes, sold out with around 3,000 riders taking part. This year’s edition promises to be bigger still with 5,000 places available.

“It was incredible to sell out in the inaugural year,” said Cavendish, who added: “All three routes were real challenging, testing the riders mentally and physically in North Wales.”

Something similar is in the offing this year with the various routes across Cheshire and North Wales. Horseshoe Pass is one of a number of challenges on the menu and there will also be another timed climb, which last year was Blwch Pen Barras – 2.2km at 11 per cent.

“There are few, if any, sportives around the world that have as its patron and founder a rider with the stature of Mark Cavendish, the world’s most successful sprinter.

“This alone must position the Rise Above Sportive as unique amongst the many. Coupled with the iconic backdrop of Chester Cathedral and the picturesque lanes and climbs of Cheshire, this has to be, for many, a sportive that cannot be missed.”