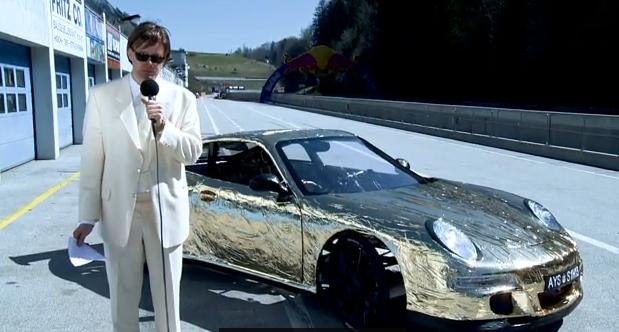 Unlike Belgians (although cycling fans could doubtless come up with a longer list than the average man in the street), there is no shortage of famous Austrians, whether in the fields of music (Wolfgang Amadeus Mozart plus the Strauss and, er, Von Trapp families), psychiatry (Sigmund Freud), acting (Maximillian Schell and Arnold Scharzenegger) or engineering.

The latter category includes Ferdinand Porsche, inventor of the Volkswgen, was born in the former Austro-Hungarian empire in Bohemia, now part of the Czech Republic. It was his son, also called Ferdinand, who subsequently developed the concept into the rear-engined sports car marque that now bears their surname.

Now, one of their compatriots, artist Hannes Langeder, has taken the design process a step further not by moving the engine from the front to the rear of the vehicle, but by dispensing with it altogether and replacing it with a transmission system based around what is in effect a recumbent bicycle. What’s more, he’s finished the bodywork off with what appears to be a roll of tinfoil.

The result is the Porsche Ferdinand, a pedal-powered piece of art blended with design and engineering based on a Porsche 911 GT3 RS that is almost certainly the first ever zero-emissions vehicle to bear the marque’s badge.

The vehicle is currently on exhibition at an art gallery, the Kunstmuseum Linz, but before going on show was put through its less-nippy-than-your-average-911 paces on the Salzburgring race track, as shown in the following YouTube clip which, reassuringly for any watching petrolheads, also shows it being overtaken by a Lamborghini at full throttle.