Following a Telegraph article claiming a proposed multi-use trail will create a race track, the National Trust offers some facts
by Laura Laker

The National Trust has responded to claims a cycle path through one of England’s most famous gardener’s creations will “ruin” it, by saying changes will open up the estate to families, those using wheelchairs and pushchairs, and people on foot, as well as people who want to cycle.

A Telegraph story yesterday, the latest tabloid attempt to blame cycling for anything from congestion to dangerous road conditions, claims a proposed multi-use path will “interfere with” Capability Brown’s  vision for his first commission at Croome Court, in the Malvern Hills

Contrary to Telegraph claims the routes will encourage visitors to “speed around his gardens” the National Trust says the 3.75 mile multi-use trail, part of a £4.5m fund from Sport England, will open up parts of the grounds which become inaccessible in winter, create a “richer and more diverse environment” and were “painstakingly designed” to fit in with the 18th Century landscape.

A National Trust spokesperson told road.cc: “The multi-use trail at Croome will open ‘Capability’ Brown’s wider parkland to all visitors, including previously inaccessible areas such as Menagerie Woodland and Sweet Briar Wood.  It’s been designed for use by leisure cyclists, family cyclists, buggy users, wheelchair users and walkers so that they can get out to enjoy the wider estate.”

The route follows Brown’s carriage route, around the perimeter of the grounds, for a third of its length and, where no historic path existed, was “painstakingly” designed to ensure minimal impact on the designed landscape. The spokesperson said the “discreet, hard-surfaced path” can be used all year round, unlike the previous mud paths through arable fields which became impassable in winter. 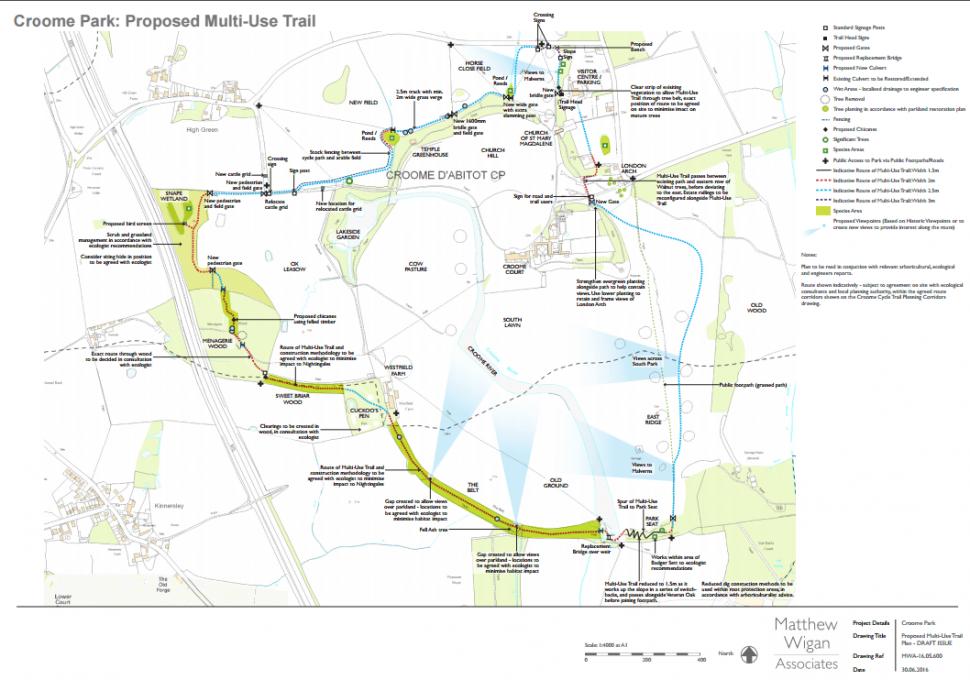 “It is important that the visitor to Croome understands the relationship of Brown’s design to the wider Worcestershire landscape; Brown’s park should feel boundless with easy and obvious connection to outlying areas of pasture and woodland,” said the spokesperson.

The Telegraph article, titled “Cycle path would 'ruin' Capability Brown's Croome Court” describes the route as a “specially built cycle track” and makes no mention of its purpose for wheelchair users or family access to the park.

The article goes on to quote Severn Stoke & Croome d’Abitot parish council. “There is an inconsistency verging on incongruity in the concept of a cycle route around Croome Park,” an unnamed spokesperson told the newspaper. The article doesn’t report whether the Parish Council feels motor vehicles are also incongruous in the landscape.

Two residents the Telegraph interviewed express dissatisfaction with the existing level of visitors, and fears the multi-use path will attract more people.

One resident of nearby Kinnersley raised fears of congestion, saying: “This will bring in more visitors, which will only add to the already increased traffic since the property opened.”

Local resident Phillipa Hicks said: “Croome is a special place. The National Trust are custodians of this heritage site and should not be allowed to turn it into their own version of Disney in the countryside.”

The Telegraph writer also guesses “Capability” Brown would not have liked cycling, although cycling wasn’t invented during his lifetime.

The National Trust spokesperson said: “The National Trust is a charity with conservation at its core and will always adhere to statutory requirements and recognised best practice in wildlife conservation. Working with Worcestershire Wildlife Trust and independent environmental consultants we carried out two ecological surveys and a full conservation assessment to identify key features and ensure they remain protected, and to make recommendations for minimising and mitigating any impacts on wildlife. The trail has been designed in sympathy with the existing environment and Croome’s resident wildlife, it also offer opportunities to enhance the site for wildlife by creating new and improved habitats in these areas, creating a richer and more diverse environment.”

The trail at Croome is one of ten new projects being developed jointly with Sports England, with £4.5m funding, to develop new cycle trails, “allowing visitors to get active and to explore the great outdoors”.

1
Cyclist fined after submitting dangerous driving video to police
2
'Incredibly talented' police officer killed after being hit by motorist while cycling
3
Cycle campaign group urge people not to cycle over safety fears
4
Bath golf club set to be transformed into bike park
5
The ‘Roadmap out of lockdown’ – what does it mean for cycling?
6
Near Miss of the Day 548: Driver makes exemplary overtake ... but almost takes out penny-farthing rider coming in opposite direction
7
Owner fined after dog sparks deer stampede in which 10-year-old cycling with family was injured
8
Nextscape launches new AlterLock lightweight anti-theft solution