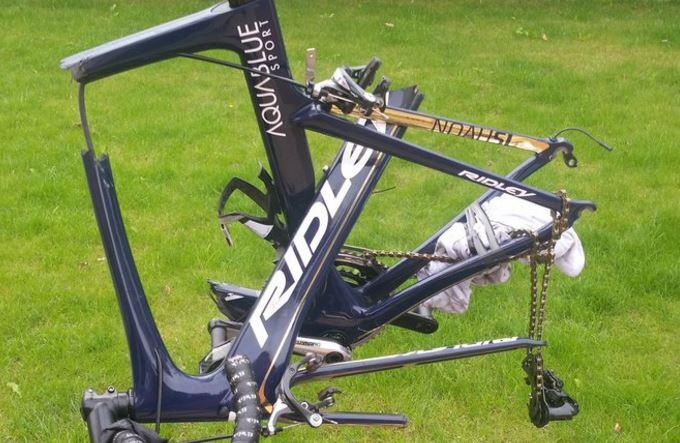 Remember that video that did the rounds a couple of months ago showing baggage handlers unceremoniously dumping bike boxes and bags from the hold of an easyJet flight? In case you missed it, here it is.

Hey @easyJet - seriously not cool for your baggage handlers to be dropping thousands of pounds worth of bikes like that! pic.twitter.com/YNlJCNzmn2

The footage was shot by journalist Andy Thornley as he waited to board a flight at London Gatwick, with the baggage handlers involved employed by Menzies, the company the airline uses for baggage handling at the airport.

@pdjohnson Hi. We have taken this up with our ground handling agent, as we expect our agents to treat our customers’ luggage with care. BR V

It was enough to make anyone who flies with their bike cringe, and now one professional cyclist has vowed never to travel with the airline again after his bike was destroyed when he took a flight with the same airline.

> road.cc's guide on: How to fly with your bike

Peter Koning, who rides for the Irish UCI Professional Continental team Aqua Blue, tweeted a picture today of the frame of his Ridley bike, broken beyond repair.

Here is my team bike after @easyJet destroyed it. Now they are refusing to help me! #dontflyeasyjet pic.twitter.com/5geShgpf9S

The 26-year-old Dutch rider competed in the Four Days of Dunkirk last week, and is due to race at the Tour of Norway, which starts on Wednesday.

That wasn't the only tongue-in-cheek reply.

@nl_peterkoning @TourDeJose @easyJet Maybe they think they did you a favour? It does fit better in the bag that way

However, this Twitter user wasn't alone in suggesting that a hard case might be safer than a soft bag in future.

I wouldn't fly with a soft bag though, hard case only.

> 14 of the best best bike bags and boxes