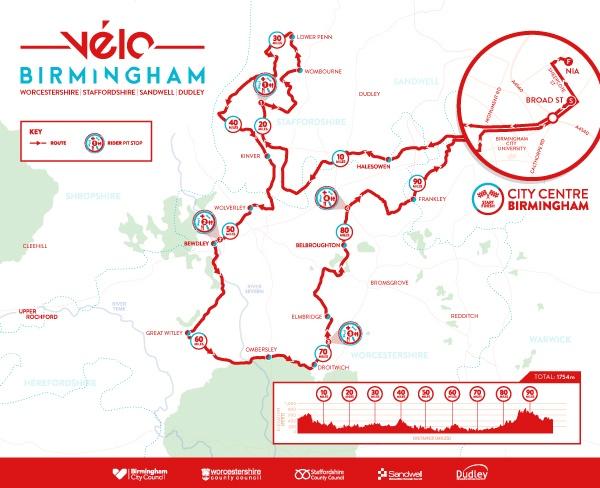 Organisers of the Vélo Birmingham closed road sportive, the inaugural edition of which takes place on 24 September, have announced major route changes following local opposition to road closures in Worcestershire.

The route within Worcestershire has been shortened by 20 miles and a section in Herefordshire skipped altogether, with the event now spending longer in Staffordshire instead.

Some 15,000 riders are due to take part in the event, and while organisers describe the changes as “exciting,” they acknowledge that the change are designed to “address issues which inevitably arise from an event with road closures of this scale.”

As we reported in May, there were concerns that the even might not be able to go ahead with a Worcestershire County Council official suggesting that permissions for road closures might not be granted.

The council said it only learnt that the event was on fully closed roads when leaflets were distributed to local homes and businesses.

A loop through west Worcestershire that included Great Witley and Hillhampton has been removed altogether, and there has also been a re-routing between Droitwich and Cutnall Green to minimise the impact on pubs and other businesses there.

The early part of the 100-mile sportive will see participants leave Birmingham to head towards the new Staffordshire section, which will take in towns and villages including Kinver, Wombourne and Trysul.

CSM Active executive chairman Jon Ridgeon said: “We were already working closely with Staffordshire as an existing route partner and we are delighted to be able to extend the Vélo Birmingham route further into this beautiful county.

“We think our riders will agree that this new route is absolutely world class, and I’m sure they will be guaranteed a fantastic welcome in Staffordshire.

“We also want to thank our local authority partners in Worcestershire, Sandwell, Dudley and of course Birmingham, for their continuing commitment and support.”

Mark Deaville, highways leader at Staffordshire County Council, commented: “This promises to be a memorable event for the region and has taken a lot of planning by the organisers and councils.

“We’re sure people will be supporting those taking part in the challenge and that they’ll have an enjoyable day.

“We are delighted that 20 miles of the route will go through Staffordshire, providing us with a brilliant opportunity to showcase our beautiful county to over 15,000 riders from right across the UK and further afield.

“There may be an impact on surrounding roads so we’d ask people to plan journeys in advance if they’re in that area on the day.”

In May, Jon Fraser, head of highways at Worcestershire County Council, addressed a meeting of Great Witley and Hillhampton Parish Council in May after local businesses and residents expressed concerns over how the event, and the road closures, would affect them.

"We've been in dialogue with them [CSM Active] and we had some concerns over the impact,” the Bromsgrove Advertiser reported him as saying in response to news of the revised route.

"We support this sort of thing but we need to balance that with the interests of businesses and residents.

"People have raised a number of concerns and we've been discussing this and this is partly the solution.

"They've addressed a lot of our concerns by changing the route.”

But he added: "We still have some concerns at Ombersley and Belbroughton where there's still some work to do.

"We told them we were disappointed by some of the consultation and responses to businesses so far and I think they realised they need to put more resource and time into that.”

"It's a good compromise, however we do recognise there is still some work to be done for local access solutions."