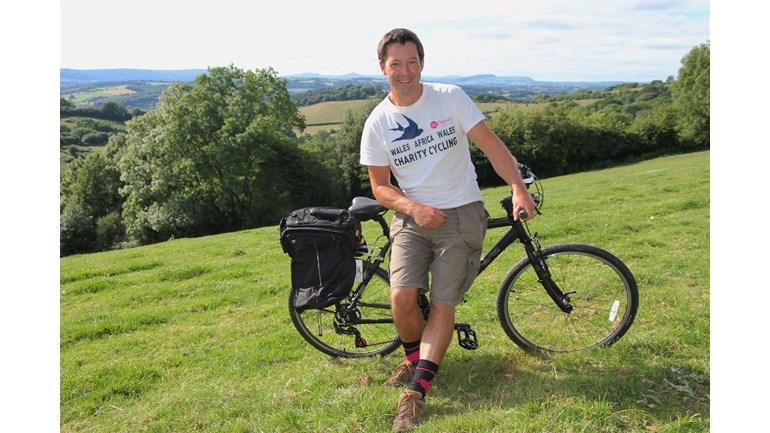 Welsh man who hasn't cycled for 20 years makes it 1,000 miles towards his goal of Africa

He's chasing the swallows from his back garden - but he has a 'rather sore derriere'.....
by Sarah Barth

A cyclist who aimed to make an unlikely journey across Africa to follow migrating swallows has already managed 1000 miles - despite not being on a bike for 20 years.

Edward Beverley-Jones, 43, a pond cleaner, as we reported in September, says he will aim to set foot in Morocco, and is raising money for a local hospice in the process.

Now in Spain, he has ridden nearly every day since leaving his home in Chepstow at the end of September.

In a series of videos posted on Facebook he described his progress across the continent.

“I’ve bumped into some people and they have taken me in and let me have a bed and given me some food,” the 43-year-old said.

“In return I’m doing some work for them.

“I was getting slower and slower and, apart from one day, I have cycled every day, all day, since September 27,” he said.

“I’ve been sleeping rough and had one to two meals, usually one meal, a day.”

As a result of his efforts, Edward has raised more than £2,500 for the hospice,  but he is only a quarter of the way through his journey.

“I’m absolutely exhausted, and I’m a little bit sore in my derriere, so I need to do something different for a couple of days,” he said.

“They asked me to do some clearing under these pomegranates.

“It’s bitterly cold at night, I’m shivering, and it’s too hot in the day,” he said.

“I take my shoes and socks off and try not to sweat because I don’t have access to a bathroom to wash in.

“I wash my clothes in ponds and try not to exert myself so progress is getting slow.

“It’s so hot – these shorts are too thick.

“So I’m changing into my swimming trunks because they let much more air in.

“There have been a few instances where I have nearly come off my bike because of draughts from lorries,” he said.

“And I nearly got hit cycling at night by a couple of deer which ran straight across me.

“I hit wet clay one day. That was slippier than ice.

“That was so scary – the front wheel nearly went from underneath me.

He said: “I’m getting a bit of rest before the next phase, the rather taxing and possibly dangerous phase, of my bike ride to Africa and then back.

“Would any of my followers do me the favour of going to Sports Direct and buying me a new set of Mr Men socks?” he said.

If you want to donate to Ed’s fundraiser click here.