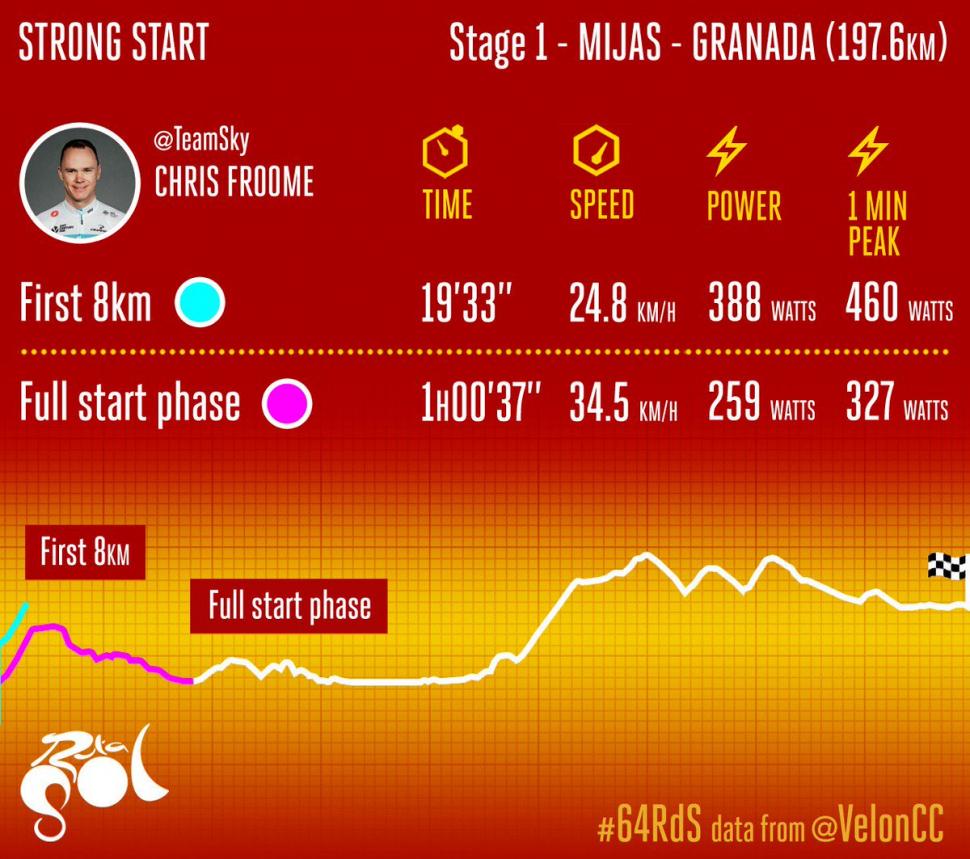 As debate continued over whether or not he should be racing, Chris Froome got his season underway at the Ruta del Sol in southern Spain yesterday. He was tracked by Velon, which has published power data from his ride.

The stage ended with a sprint finish and a win for Frenchman Thomas Boudat (Direct Energie), but all the attention was on Froome in what was his first race since his adverse analytical finding for salbutamol became public knowledge in December.

The Team Sky man finished in the peloton in 57th place.

There were six categorised climbs. The Puerto de Mijas right at the start meant Froome began his day riding just short of 400 watts for almost 20 minutes.

A summary of the data from @TeamSky's @chrisfroome on Stage 1 of the Ruta del Sol in southern Spain (@VCANDALUCIA) #64RdS pic.twitter.com/ZTFh9oeiOx

Velon also provided a comparison with two other riders for the Alto del Lucero.

The lack of progress regarding Froome’s adverse analytical finding is a source of frustration for many.

The rider himself told the Guardian he hoped his case wouldn’t still be dragging on come the start of the Giro d’Italia in May, but confirmed that he would still take part even if it was. “Let’s hope it doesn’t come to that, but I’m still allowed to race now and I don’t see why not.”

He added: “There are a lot of other athletes and riders who have been through this process and I’m not asking for the benefit of the doubt here. I’m just asking for a fair process, to be treated the same as other people.”

Some have suggested that Team Sky should have suspended Froome and there have also been reports that the UCI may impose a provisional suspension.

Team principal Dave Brailsford expressed his belief that all involved should adhere to ‘the process’.

“Nobody’s denying it’s a challenging situation but equally I think it’s only fair at this point that everybody abides by the process, and the process totally allows him to race in this situation and that’s what we’re doing.

“We’ve got full knowledge of the situation and we’re working closely to resolve the situation. The violation itself is all about the number of puffs [Froome took on his inhaler], it’s not about the urine. Has he taken more than 16 puffs in that allowable period? No, no. I’m confident he didn’t break the rules – 100% confident.”