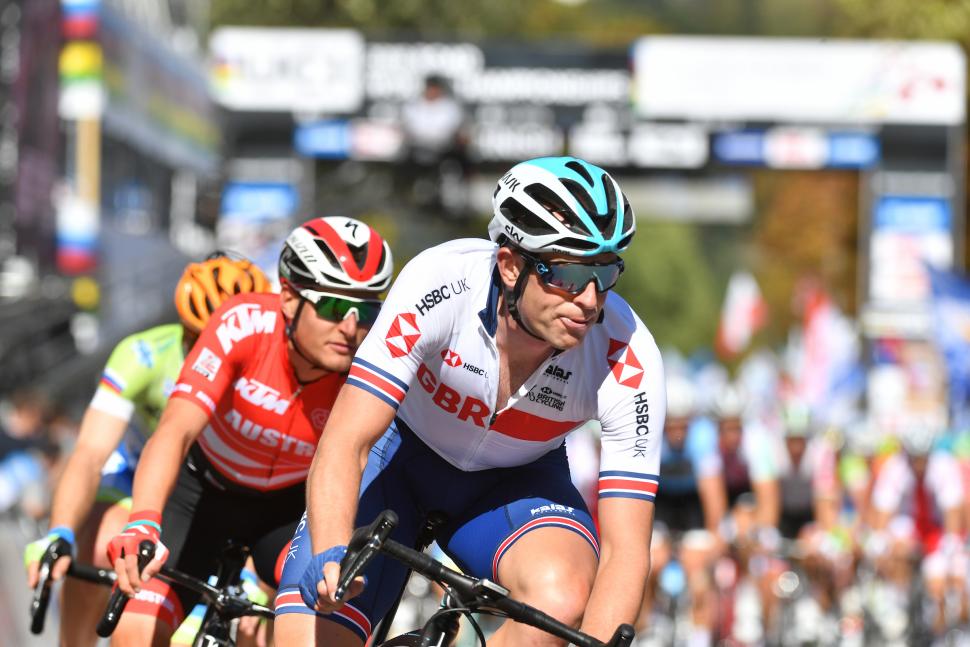 Team Ineos riders dominate Great Britain’s men’s elite line-up for the UCI Road World Championships in Yorkshire next week, with Ben Swift likely to be the protected rider in the road race and Geraint Thomas riding that event a week on Sunday, as well as the individual time trial on Wednesday.

The other slot in that discipline goes to the man who replaced him as national time trial champion this year, Alex Dowsett of Katusha-Alpecin, while the only rider not from Team Ineos in the road race squad is Adam Yates of Mitchelton-Scott.

With Great Britain dropping out of the top 10 of the UCI country rankings immediately prior to the cut-off date for qualification last month, there will only be six riders in the road race rather than the maximum eight.

Joining Swift, Thomas and Yates in the line-up for that race are Ian Stannard, Owain Doull and Tao Geoghegan Hart, all three fresh from the Vuelta which finished on Sunday.

With a little help from some friends, here’s @swiftybswift to introduce the Elite Men’s team that will be representing Great Britain at the @UCI_cycling Road World Championships
#Yorkshire2019 pic.twitter.com/Gu3fmCis8g

Geoghegan Hart, at 24, is the youngest member of a team where selectors have gone for experience – eight years ago, Stannard and Thomas helped Mark Cavendish win the rainbow jersey in Copenhagen.

Cavendish himself was omitted from the long list when it was announced earlier this month. The riders who did feature but have missed the final cut are Hugh Carthy, who crashed out of the Vuelta, Adam Blythe, Gabz Cullaigh, Matthew Holmes, Chris Lawless, Connor Swift, Simon Yates and Luke Rowe – the latter perhaps the most surprising omission, given his role as road captain at the Tour de France for Team Ineos.

Matt Brammeier, British Cycling’s elite men’s road coach, said: “We have such a talent pool of elite men’s road riders in this country that final selection was quite tricky even though the course is so challenging.

“Looking at the time trial, we have selected two very experienced time trial riders this year in G and Alex, both of whom suit the course and as such we can expect to see good performances from them both.

“G will then stick around to compete in the road race on the Sunday, and will no doubt be a valuable asset to the team in the final laps.

“National champion Ben Swift has really stepped up again this year and has come back to his best since his injury. I know he can’t wait to get racing in front of his home crowd, and I think having that support will really spur on the whole team. Tao and Owain join us from the Vuelta, where they have both impressed as relatively young riders in the professional peloton.

“Adam Yates has had some great results this season, both in one day and stage races, and he’s in great form, as is the ever-reliable Ian Stannard who will be a great team player for us throughout the race.

“Having just finished the Tour of Britain with the Great Britain Cycling Team, I was once again blown away by the level of support we receive out on the roads and I know we are all looking forward to experiencing that again in Yorkshire next week.”