All today's news from the site and beyond as we start a new week..... Here’s a great idea from Mark Cavendish – he’s called on Team Ineos to throw its resources behind its time trial specialist Filippo Ganna to help make him the first man to ride a 4km individual pursuit in less than four minutes.

Ok, here’s one for @TeamINEOS: after @EliudKipchoge & @INEOS159 a few weeks back, how about @GannaFilippo doing an #Ineos359 challenge? A sub-4minute 4km individual pursuit once seemed unimaginable. Like a 4minute mile or a 2hour marathon. Now it seems we have someone to do it

He did have to clarify his tweet afterwards however for the benefit of people on Twitter who fail to read and understand a post before hitting ‘reply’- which we have never done, of course ...

Next Saturday marks the 30th anniversary of the fall of the Berlin Wall – a landmark moment in European history that coincided with the rise of pro-democracy movements across the former Eastern Bloc, and which would lead to the reunification, less than a year later, of East and West Germany.

To mark the occasion, Strava commissioned Gary Cordery of the Strav.art website to undertake a very special ride – one that recreates the ‘socialist fraternal kiss’ between former Soviet Union leader Mikhail Gorbachev and his East German counterpart, Erick Honecker.

The kiss took place on 7 October 1989 as East Germany celebrated its 40th anniversary, with Gorbachev the guest of honour at the celebrations – but if Honecker and his allies thought his presence would bolster the regime, they were wrong, with the Wall falling barely a month later. The exchange of kisses – most often on the cheek, but sometimes more intimately – was a traditional one among leaders of the former Warsaw Pact countries.

The above mural called My God, Help Me To Survive This Deadly Love and based on the photograph of one of Gorbachev's predecessors, Leonid Brezhnev, locking lips with Honecker has become one of the iconic works of graffiti on the part of the Berlin Wall that remains as a reminder of the city and country’s past while doubling as a street art gallery devoted to that period.

It took 6 hours 35 minutes to ride the 100 kilometres needed to create the Gorbachev and Honecker photo on Strava. You can find the full post here – and a post covering the three days of preparation here.

Because we can't think of anything to write at the moment, let's get on our high horses about riding in all weathers, or alternatively wax lyrical about the benefits of indoor training so you needn't head out in our disgraceful winter weather... which one are you?

*Re the photo... yes our graphic designer is out for the afternoon, and yes it was achieved by crudely screenshotting two of our archive photos together on a Word document. No refunds.

04 November 2019, 14:38
Alberto Contador in health scare as he spends two days in Colombian hospital with fever and stomach bug

Gracias, gracias y gracias a todos por vuestro interés y cariño tras estos días enfermo en Colombia.Ya me dieron el alta y continuamos con la agenda. “Querer es Poder!- Thank you, thank you and thank you all for your interest and affection after these days in Colombia in which I was sick.I was discharged and we continue with the agenda. Querer es poder!

The Spaniard - who retired in 2017 - was in Colombia to ride El Giro de Rigo, a three-day cycling event created in association with Rigoberto Urán of EF First. Unfortunately Contador didn't make the start line as he fell ill over the weekend, and was admitted to hospital in the Colombian capital of Bogotá. He was suffering with a high fever which he says may have been caused by food poisoning.

In the Instagram post above, 36-year-old Contador says he has now been discharged, and thanks everyone who wished him well during his unplanned hospital stay. 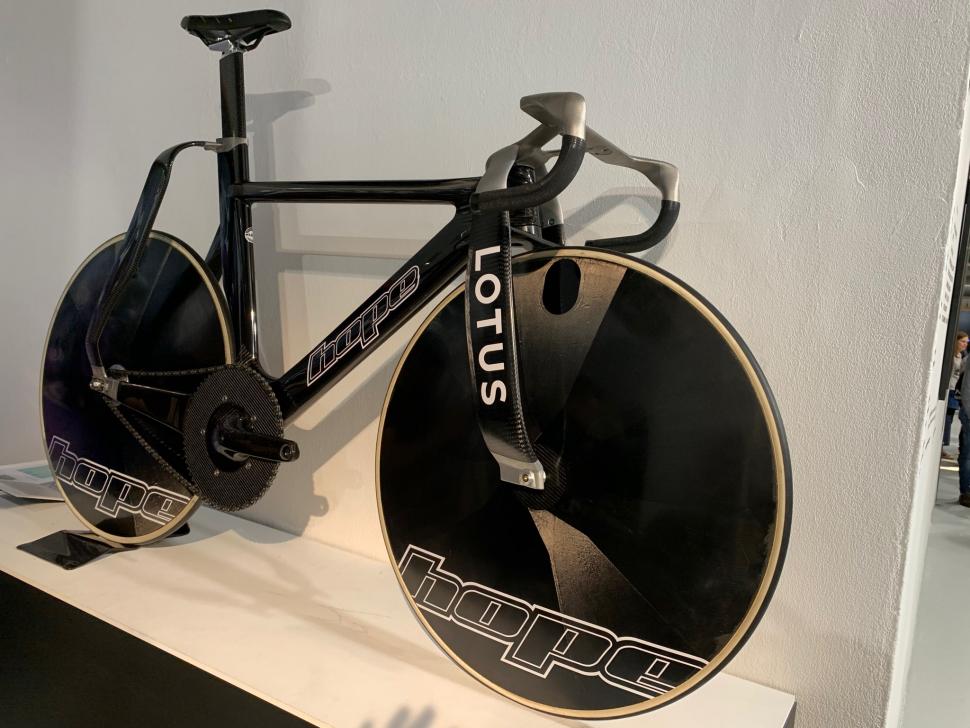 The bike has just debuted at the UCI Track World Cup, read all about it here.

The Hammersmith Bridge closure has been a nightmare for residents and local businesses. I'm working with govt to lobby TfL to build a temporary bridge while repairs are made. But I need your help. Please take part in my consultation:https://t.co/5BwZYpTXsV pic.twitter.com/JuRVcIEmF9

The Conservative Minister of State for Environment & International Development, who is also fighting to hold his Richmond Park seat at the upcoming UK general election, appears to have momentarily forgotten his environmental credentials as he says he is lobbying TfL to open a temporary bridge for motor traffic while the main Hammersmith Bridge is repaired. Described as a 'closure' on the above Twitter post, numerous replied reminded Goldsmith that the bridge isn't closed at all to pedestrians and cyclists, and has arguably become a great deal more pleasant since motor vehicles were banned from crossing.

The Hammersmith Bridge closure has been a nightmare for residents and local businesses. I'm working with govt to lobby TfL to build a temporary bridge while repairs are made. But I need your help. Please take part in my consultation:https://t.co/5BwZYpTXsV pic.twitter.com/JuRVcIEmF9

Walked across Hammersmith bridge just the other weekend, it was being heavily used by pedestrians and cyclists, you could hear the birds and there was no traffic either side. Didnt look like a nightmare to me...

As we reported last week, it's understood that TfL are in favour of installing a temporary bridge, but one for cyclists and pedestrians rather than a bridge for motor traffic, the latter of which would cost around £5 million to install. Hammersmith Bridge itself is set to be fully closed for at least three years while repair works are carried out, with the project estimated to cost £120 million. Cycling and walking campaigners have argued that when it is fully repaired, the bridge should be for cycle and foot traffic only on a permanent basis.

There is a valid reason why the UCI bans this position. It's super aero.

There is no entry fee, but can add a donation here.

Custom specialist Wildoo has added a range of what it calls 'eco products' to its range. Nature Bio Bottles are made using green ethanol extracted from sugar cane. The bottles are recyclable at the end of their life so the material can be ground down and repurposed.

The Nature Bio Bottles are not biodegradable. Wildoo says that this is because the bio additive that would need to be added will only work in a landfill environment.

"As a responsible supplier we cannot advocate disposal to landfill so we will not use the additive and only promote recycling," says Wildoo.

Nature Bio Bottles are available in a range of sizes and colours, custom printed with minimum a quantity of 100.

Get more info over at www.wildoo.co.uk.

Check back for a full story on this classic cycling mishap... or is it? Let us know in the comments if you see a use for putting your bike upside down to have a tinker.

Shimano's new GRX groupset now offers a dedicated 1x option for gravel riding. David Arthur has been riding it to see what it's all about, and you can watch his first ride impressions in the video below

We've heard of ex-cyclists moving to long-distance triathlon when they've finished their professional careers - in fact Alexandr Vinokourov won his age-group at the Ironman World Championships last month - but rarely does a competing pro cyclist on the World Tour put themselves through an Ironman with, you'd think, little specific training. That's what Adam Hansen of Lotto Soudal did on Saturday though, as he completed Ironman Florida in a very impressive time of 9:05:54, coming 8th in his age-group.

Last and not least, my hanseeno's carbon kicks with @leomolabs sensored up. Going to be a fun day #IMFL pic.twitter.com/X8aaBAVrSs

As @MarcelSieberg would say, Twin Tower handle bars. I made them 4 days before the race. https://t.co/XS0hEKBhpT pic.twitter.com/SBkbyGaAHG

Being an engineer Hansen also went for some very interesting gear and kit choices - he used his own Hanseeno brand one-piece carbon shoes, and on his Ridley TT bike equipped with Campagnolo shifters he added this crazy handmade bar extension he's dubbed the Twin Tower, that he claims to have made four days before the race. Answering questions on Twitter, he also says that he did a maximum of 15 runs in the build-up, no longer than 20km - meaning the 42.2km marathon must have been quite a tall order at the end of the 3.8km swim and 180km bike ride, but he still did it in three hours and 37 minutes. Hansen's bike split of 4:15:23 was the fastest out of the age-groupers, but still quite a way off the blistering 4:01:19 from the third-placed pro Andrew Starykowicz.

04 November 2019, 09:38
Thousands of cyclists protest in Chile after spontaneous uprising against government

A large crowd of cyclists in Santiago crossed the richest part of Santiago to go to the house of our criminal president Piñera.#Chile #ChileDesperto#PeligroPiñeraMata pic.twitter.com/wXXIKffyWW

Up to a million people are said to have took to the streets of Santiago in the last three days, accusing the government of corruption and voicing frustrations at the continuing class inequality in Chile. These cyclists shut down one of the main highways in Santiago and were reportedly headed towards the residence of President Piñera to voice their frustrations.

Excellent news, hopefully next time you’ll give the human being riding the bike some safe space.

"I can't believe I got punished for putting the life of another road user in danger"
Here's the sound of some tiny violins for you. I hope the fine is large.

Drive as if every person on a bike is your child, your husband, wife... we are all humans just using different kind of transport

#PSA With effect from 5 Nov, e-scooters will be banned on all footpath. They will only be allowed on cycling paths and Park Connector Networks. pic.twitter.com/BlHOtVw0kN

E-scooters will now only be allowed on cycle paths and connector networks to Singapore's parks, and will be banned from footpaths. It comes as new regulations are set to be put through in France, while on the other hand in the UK the Lords were debating whether they should be allowed at all, as they are still technically illegal throughout most of the UK. If you've been preoccupied watching that thing with the peanut-shaped ball instead this weekend, here's some of the cycling-related stuff you may have missed...

Bikes on trains – let us know your experiences, good and bad