All the cycling news from this site and beyond...
21 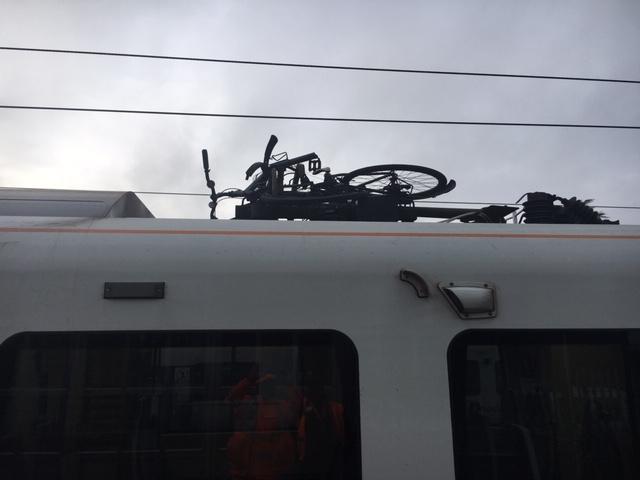 #TLUpdates - Due to an object being caught on the overhead electric wires at St Albans City all lines are disrupted.

Services that operate between St Albans City and Sutton via Mitcham and via Wimbledon will not run. 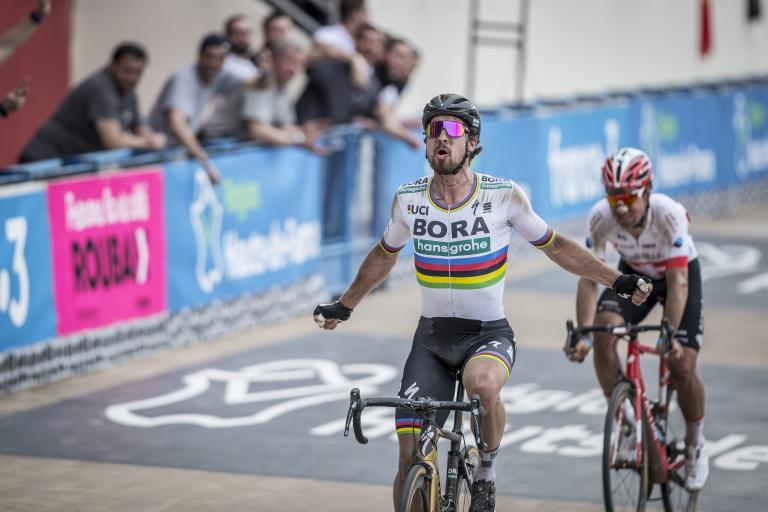 Peter Sagan says he can “see the end”

“It's not enough just to be good on the bike,” says Peter Sagan about being a pro cyclist. “You need to be good with people, good with sponsors."

The Slovak told Cycling News that while sponsorship obligations worried him in earlier years, they bother him less these days because he can “see the end”.

“I don't think I can keep riding to 40 years of age with my style. I don't have a lot of years left. But that's more motivating than frightening, because you realise that it's going to end soon, so you should enjoy it."

Sagan was also asked about Mathieu van der Poel’s efforts across multiple cycling disciplines. He wonders whether the Dutchman should narrow his focus, arguing that, “trying to put two feet in the one shoe is difficult."

You can donate here.

We’ve found a slightly longer version of a video posted to The Brussels Times website where a Flemish cyclist refuses to pass a truck, arguing that there isn’t enough room.

The truck driver says his truck’s too heavy to go onto the verge and there’s enough space to pass.

You never forget your first bike. Kye Whyte's was silver.

Where will your bike take you? Share this video and tell your #ChristmasBike story

He said: “For me, it all started with getting that first bike as a three-year-old. I had no idea then where that would take me, but that moment set the course.

“From a personal point of view, my first bike set me on a path towards the Olympic Games, a dream which I hope to fulfil next year. However, the sense of freedom, independence and adventure that comes with your first bike is something that everyone can share, regardless of whether they have Olympic ambitions or not.” 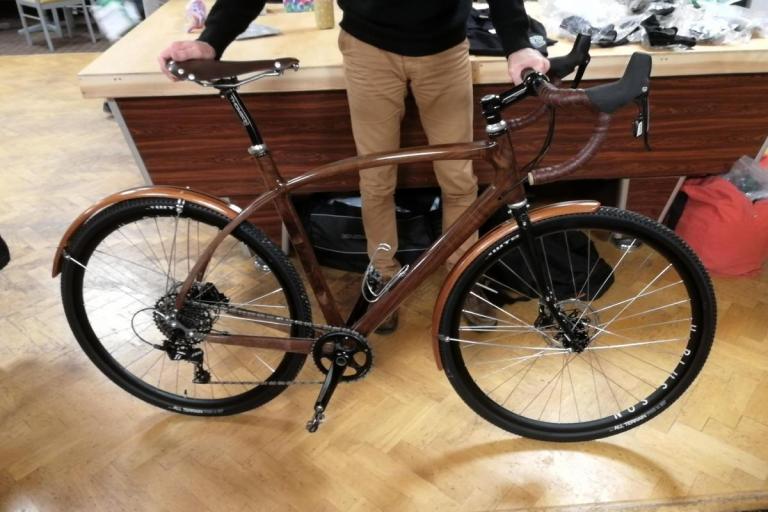 Even the mudguards are wood

This walnut laminate road bike is a hell of a thing.

Many years in the making, you can find the story of its creation on Facebook. 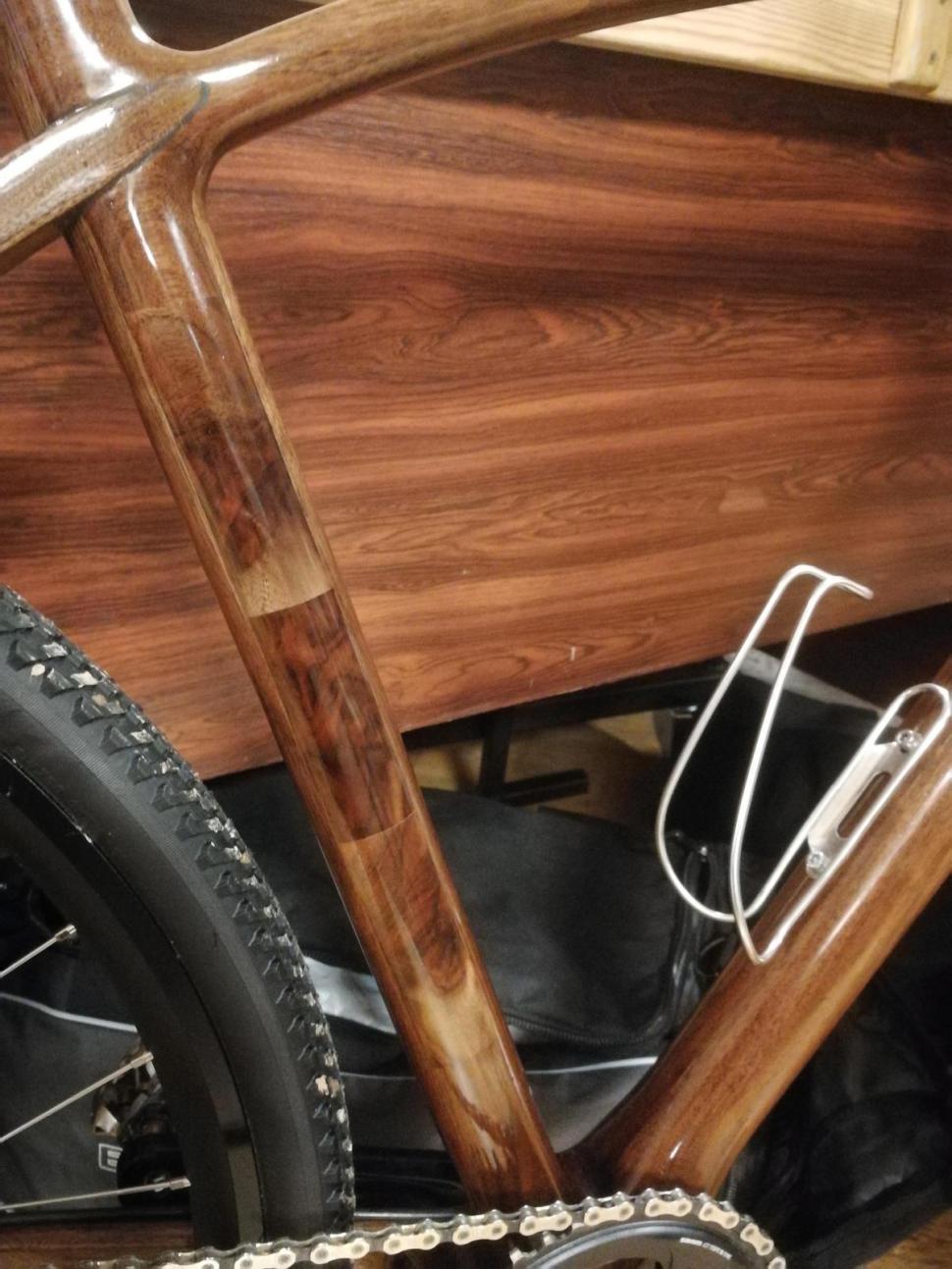 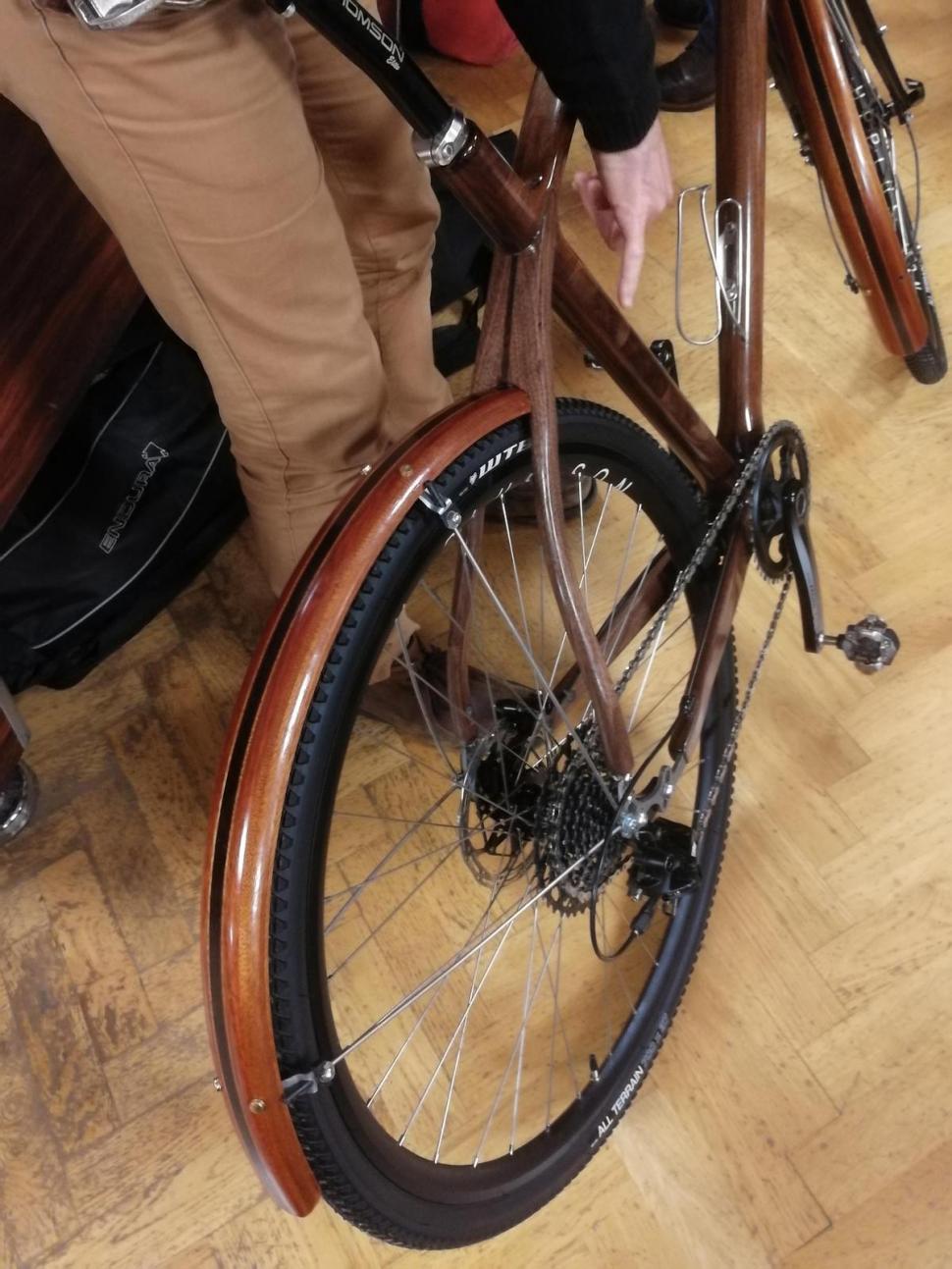 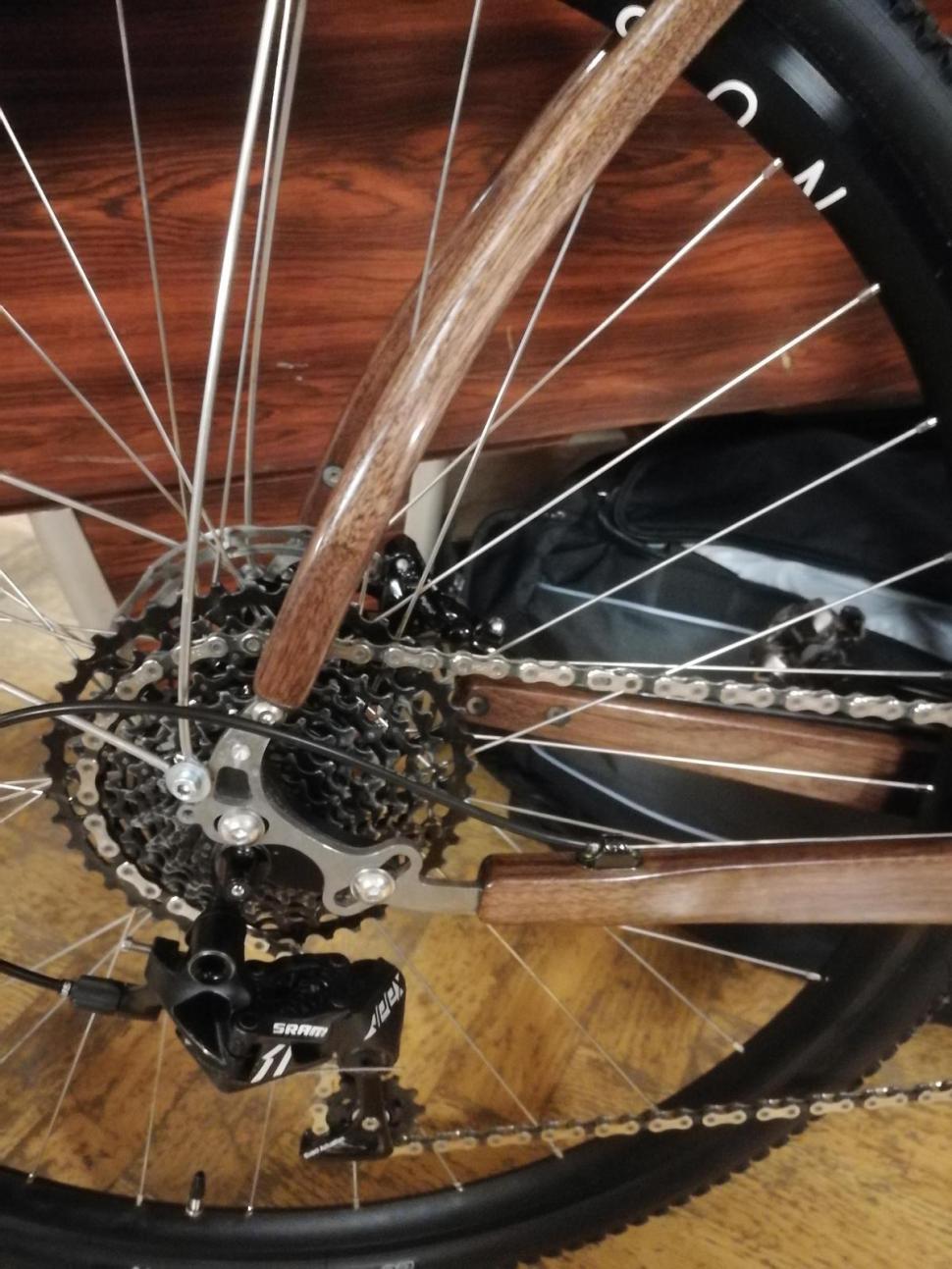 12 weeks since my knee replacement. 40 miles today. Some Americans fascinate me. At the traffic lights one said 'that's a nice bike, where are you from'... I said as a joke Germany. He said oh I love Berlin ! pic.twitter.com/yyRYMSoy3t

05 December 2019, 11:58
Breathing London air is the same as smoking 150 cigarettes a year, according to the British Heart Foundation

The charity’s analysis shows that people living in the Newham, Westminster, Kensington and Chelsea, and Islington areas of London are worst hit by air pollution.

The “posh, anti-cycling boroughs” according to Jeremy Vine.

Air quality is so bad in parts of London it equals 3 cigarettes a week. And the places most affected are the posh, anti-cycling boroughs. We see you pic.twitter.com/AMwWn799PB

This is one hell of a commute, you won't fail to be impressed by the level of skill this rider has, not to mention the size of his balls!

You don't see many of these out and about.

We believe it's an Ecce.

Squad Goals. . Excited to be racing @im703middleeast on Saturday in relay with these 2 legends. @chloemccardel & @gomofarah.

We haven’t researched this in any great detail, but the other members of the team are Mo Farah and Australian open water swimmer Chloe McCardel, so seems pretty safe to assume he’ll be doing the 56-mile (90 km) bike leg. 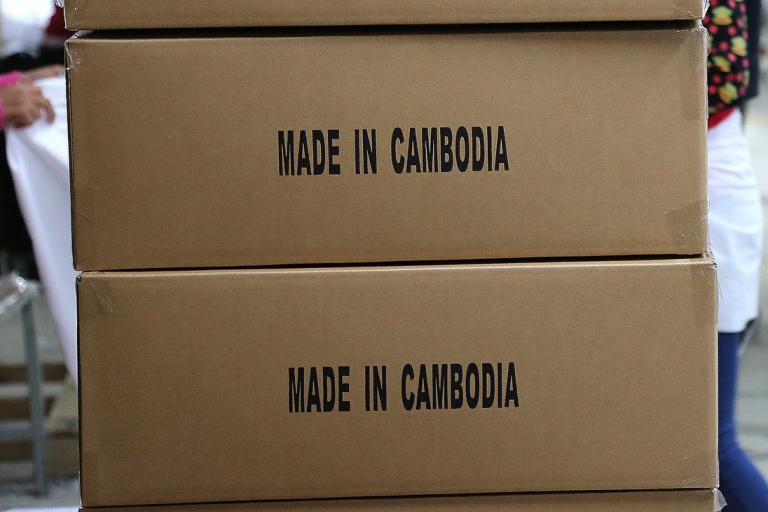 The BBC reports that thanks in large part to rising costs in China, Cambodia is now listed as the fifth-largest exporter of bicycles in the world after China, Taiwan, the Netherlands and Germany.

It is the EU’s biggest supplier, having shipped 1.5 million bikes to Europe last year.

Cambodia currently enjoys tariff-free access to the EU, but that may be cancelled in February when the EU publishes the results of a review into Cambodia's political situation – references have been made to a "deterioration of democracy, respect for human rights and the rule of law."

There have also been calls for a review of the US's preferential trade relationship.

An EU-Vietnam free trade agreement comes into effect next year and Robert Margevicius, the executive vice-president for US-based Specialized Bicycles, which uses Speedtech in Cambodia as well as suppliers in Vietnam and Taiwan, said: "Cambodia could be a short-term solution until things heat up in Vietnam."

Moun Channheak, from Cambodia's Ministry of Commerce says the government is doing its utmost to support the sector.

"We gained success with bicycle exports to the EU and other countries but we need to invest in components manufacturing. We need investments in Cambodia instead of importing material."

There is however also the question of working conditions. Zeit reports that workers in many of the factories are being exploited in a longish piece that makes for a very interesting read.

We didn’t think it possible.

Even Mathieu van der Poel can make a mistake.

1
First Look: Goodyear Eagle F1 road tyres launched with graphene technology
2
Near Miss of the Day 363: White van man in ultra-close pass - but police say cyclist at fault (includes swearing)
3
Cycling world reacts to Lance Armstrong's $30k ride
4
About road.cc’s new design: what we've changed and why
5
Cycling group named on counter-terrorism watch list
6
Near Miss of the Day 361: "Why go in front of me?"
7
The bicycle is the future of urban mobility, predicts Deloitte report
8
Chris Froome to return to racing at UAE Tour next month